It almost sounds like the plot of a movie, or a new Netflix series: What if you were in a cave, or outer space . . . or out at sea, and completely missed the fact that the world had come to a screeching halt?

Bill Norrie set sail from Victoria, BC, in September, sailing past Cape Horn and east. The 67-year-old Calgary resident stopped in South Africa three months ago, when COVID-19 was just a blip on the radar. When he arrived in Christchurch, New Zealand, after three months at sea, “The pandemic caught him by surprise when officials started to query whether he was planning to spend 14 days in self isolation upon landing,” TVNZ’s 1 News reported. “Initially they said, ‘You can’t come here,’ so I was like, ‘Where am I gonna go?'”

Norrie is sailing what we’ll guess is a roughly 30-ft cutter named Pixie. “My wife said, ‘The jargon is rounding off the curve, so now we’re six feet away [due to social distancing],’” Norrie was quoted as saying. “So it’s a little strange to me. It hasn’t really hit me yet, because I haven’t really had much contact really.”

The harbormaster in Christchurch quickly determined that Norrie was in the clear.  “He’s been at sea for three months, by himself, socially distancing, washing his hands, doing all the right things.” (You might be wondering: If there’s no COVID on the boat, then is washing your hands really that important?)

Ever the tireless sailor, Norrie plans to leave New Zealand soon and head back to Victoria to complete his circumnavigation. “I can’t wait to get out there, but I’ve had enough Southern Ocean for a while,” he says.

Every once in a while, you nail it. And, if you’re lucky, your dad catches it on video.

Jesse Andrews, the junior sailing director at Kaneohe Yacht Club and assistant sailing coach at University of Hawaii, managed to catch one such moment. Jesse was filming from the pin end of the starting line for the 2019 El Toro Junior North Americans when he caught his son Makani port-tacking the fleet at the start.

Nice move. Check out the video below.

While the El Toro was conceived on the shores of Richmond, the 11,000 boats built eventually spread far and wide. Kaneohe Yacht Club maintains an active fleet in Hawaii, and continues to be the breeding ground for hotshots like Makani Andrews. 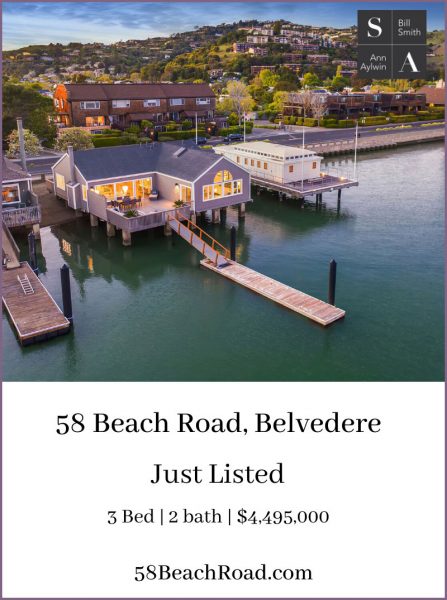 Given the uncertainty about the latest health guidelines regarding sailing, we decided not to take any chances. To the best of our knowledge Crissy Fields has never had a sick day, never coughed or sneezed, and has been a member of the ‘household’ for more than a decade. Her last contact with people was the April 2019 Pacific Boat Show. Though she had never sailed before, she turned out to be a remarkably gifted helmsperson, who seemed to have a sixth sense for the subtleties of sailing the Bay.

Like most of us, Crissy had tired of sheltering in place. Except for the annual visit to a boat show, she’s been sheltering in a garage for most of the past 15 years. You can imagine she was as happy to be on the Bay as every other sailor this past Saturday.

We did venture out Saturday afternoon after a long absence from the Bay. It was idyllic, with lots of boats, gentle 12-knot breeze, warm air and flat water. It was just like old times but with no racing. As it turns out, not everyone needs a race as a reason to go sailing. We explored the Sausalito waterfront, threaded our way through a fleet of fishermen on powerboats and kayaks trying their luck along the tidelines swirling off the tip of Belvedere, and simply sailed around. That might sound pointless to some, but it was just the antidote we needed.

Getting out on the Bay almost makes you feel normal. The only thing different was the lack of friends aboard and a rather one-sided conversation with Crissy Fields. It’s a step in the right direction and maybe a prelude to our Bay Area summer sailing staycation. We don’t expect that many people will go to Italy or attend rock concerts, ball games or camp this summer, so many sailors will have a chance to get reacquainted with one of the region’s best getaways in one of the world’s top tourist destinations, our own ‘hometown’ of San Francisco Bay. Sadly Crissy will probably spend most of the summer back in the garage.

“Social considerations, the health and safety of our boat owners, show attendees, volunteers, staff of the Corinthian YC, and the general public have to be our priority at this time,” writes Bill Conneely. “So the MMBA Board has made the decision to cancel the Wooden Boat Show in 2020. The show will return in 2021.” Corinthian Yacht Club in Tiburon was to have hosted the show on June 21. “The MMBA Board is actively considering a number of social and sailing options to bring members together as conditions allow, and will plan and support such events if it is feasible. The date and location of the 2020 annual meeting is pending, and our Labor Day Cruise-in to China Camp remains on the calendar for the time being.” The MMBA was to have held their annual meeting on June 20 at CYC, in advance of the Wooden Boat Show. See www.sfmastermariners.org.

Representatives from PICYA, EYC, SBYC, StFYC, RYC and SFYC met in early May to determine the fate of the PICYA Lipton Cup. “While the originally scheduled dates of June 19-21 are not feasible at this point, we did not want to give up hope that the event could still be held this year,” write co-chairs Ted Floyd of Encinal YC and Andrew Lorenzen of South Beach YC. “Therefore, we identified another date which currently works for the three host clubs.” The event uses St. Francis YC’s fleet of matched J/22s. “We are pleased to announce that the 2020 Lipton Cup has not been canceled yet, but instead rescheduled for August 7-9.”

Alameda Community Sailing Center has canceled the Chichester Regatta for Lasers that they had planned to host on June 6-7. ACSC is accepting summer sailing camp “waitlist” registrations.

The Fresno Yacht Club has canceled the High Sierra Regatta weekends at Huntington Lake in July. “We had hoped that a socially distant sport would be allowed to continue, but in the end, our insurance carrier advised they won’t provide coverage during a pandemic.”

On Wednesday, May 13, World Sailing announced the cancellation of the 2020 Youth Sailing World Championships. Salvador, Brazil, had been slated to host the regatta on December 12-19, 2020. “World Sailing’s board of directors and the Confederação Brasileira de Vela agreed to cancel the event in anticipation of global travel restrictions and to ensure the health and well-being of athletes, coaches, parents, officials and suppliers.”

The Youth World Championships is a crucial point on the path of US Sailing’s Olympic Development Program sailors. As a result of the cancellation, US Sailing is reviewing the posted athlete selection procedures for amendments.

The J/111 Class Association and the Royal Ocean Racing Club have canceled the J/111 World Championship and Pre-Worlds, scheduled for September 2-5 and August 30-31, respectively, in Cowes, UK. “The strong consensus view is that even if yacht racing is permitted in September we are unlikely to get enough boats to make a serious event,” commented Simon Bamford, class captain of the Northern European Fleet.

Early on, the GC32 Racing Tour canceled the GC32 Oman Cup, originally scheduled for March, and now this month’s event on Lake Garda in Northern Italy is postponed. The GC32 Riva Cup was set to be the second event of 2020, at the end of May. It’s now delayed to October. The GC32 Lagos Cup in Portugal has moved from its original June date to the end of August. The GC32 World Championship, due to take place in Villasimius in southeast Sardinia in mid-September, moves to 2021. So, this season, the GC32 Racing Tour will stage two stand-alone events: 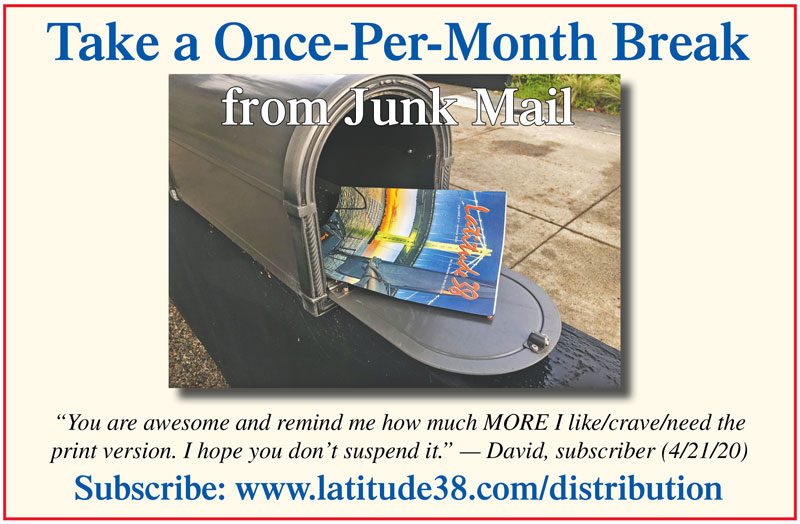 Have Latitude 38 magazine mailed to your home!

SHARE ON Tweet Share Email Linkedln
Leave a comment
Receive emails when 'Lectronic Latitude is updated. SUBSCRIBE
'Lectronic Latitude: Friday, May 15
French Polynesia Restrictions Loosen
South Pacific Wind Shift: Beginning of the End of Lockdown
Andy Turpin writes in from Nuku Hiva about a slow easing of restrictions on South Pacific cruising.
The World Famous L38
Caption Contest(!)
Here’s your May Caption Contest(!), shot by Latitudian Mark Bettis. Please comment below, and be sure to check the June issue of Latitude 38 for the winner.
Sponsored Post
Passage Nautical Offers Beneteau Oceanis 41 for Sale
The 2014 Beneteau Oceanis 41 Scarlet Fire is offered by Deborah Reynolds of Passage Nautical.
college sailing
Hawaii Yankee Jesse Andrews, Part Two
Jesse Andrews has been an assistant coach for the University of Hawaii’s Rainbows for 23 years, after completing an All-American sailing career at the UH Manoa campus.
Two Safety Tips
A National Safe Boating Week Like No Other
National Safe Boating Week runs Saturday, May 16, through Friday, May 22. The usual recommendation urging lifejacket wear is now joined by an equally important message — how to stay safe during the time of COVID-19.
Submit your ad online.
Classy Classified Deadline Is Today!
You can easily list your sailboat for sale online. The deadline for the June issue is today, May 15. To get your ad into the June issue, submit your ad by 5 p.m.
More 'Lectronics »
Report Listing