The word ‘yacht’ has always bothered me.

It’s simply too pretentious for my taste. When I go sailing, I don’t go to the yacht, I go to the boat, and there is a distinct difference. When I think of yachting, I imagine a Jay Gatsby-type character sipping  champagne and eating Grey Poupon. For some people that image is exactly what they’re looking for. On the other hand, my idea of a great day on the water could not be more different. There is no feeling quite like a boat sailing in its groove, heeling with the lee rail down, and handled by an adept crew. Truly sailing a boat is the art of creating a symbiotic relationship between yourself, your shipmates and the natural world. It is a feeling I constantly crave and that has in turn molded many of my most deeply-held values.

Living in such a developed and technologically advanced world makes it all too easy to adopt an anthropocentric mindset, which perceives humanity as an entity distinct from nature.

Sailing a boat quickly breaks down that attitude.

When I was first learning how to sail, my captain told me, “Sailing is a metaphor for life. Your success is not measured by what the sea gives you, but by what you choose to make of it.” As my experience on the water has grown, I have found this statement to be increasingly true. A sailor excels because of the frame of mind they choose to maintain. Those who leave the dock with an overcompensating ego and an attitude of dominance, defiance, and the idea that they know everything there is to know rarely find success on the water, at least not for long.

The harsh reality is that the natural forces of the Earth are always in command of the vessel. It doesn’t matter how much a sailor has thought out, planned, or prepared for a voyage, Mother Nature can always take control. Don’t try to overcome nature, because that’s a losing battle. Successful sailors, on the contrary, view the wind not as something to manipulate or exploit, but rather a force to work in harmony with. In reality, this seemingly negligible choice of viewpoint is a critical component in their triumph. Good sailors work with what they are given and make the best of it, and the result can be truly beautiful.

Besides the pure satisfaction of moving a hull across the water’s surface, sailing affords me the ability to broaden my perspective of the world, how it works, and the role that humans should play in it. When sailing, I am readily reminded that the world is larger than myself, as the inherent value of other species becomes blatantly obvious. The dynamic nature of the ocean and wind reminds me that some things are simply out of my control, but I can choose to react responsibly.

Sailing with a crew reminds me that the divisions we place between people are often trivial, and that which unites us is more powerful. Setting sail and maintaining proper trim reminds me that effort is both necessary and a noble endeavor. In short, sailing a boat offers genuine experiences not accessible on land, while simultaneously presenting opportunities to grow and refine one’s personal character. Yachting, on the other hand, entirely misses the point. Engagement, teamwork and observation are far more virtuous and worthwhile.

Latitude Nation — As you may know by now, San Diego Bay was recently closed to recreational boating. We thank captain Andrew Naslund — who sent us this story a few weeks ago — for reminding us of better days both behind us and ahead.

An Update from Fiji

Since their last note, Richmond Yacht Club members John Dinwiddie and Diane Brown of the Hans Christian 38T Tabu Soro (“Never Give Up”), checked in with an update from their shutdown in Fiji: “Just over a week ago we loaded up on some supplies and headed out to spend some time in the outer islands. What a beautiful place this is to be if you need to keep your social distance! Unfortunately, toward the end of the week, the Fijian government put the country into lockdown.”

“There is a curfew from 10 p.m. till 5 a.m. every day, and they are not allowing any of the ferries, private boats or yachts to move between the islands or out of the main harbors. We headed back to Royal Suva Yacht Club, filled our fuel tanks, and stocked up on food. We have been told by other friends out there at some of the other islands that the fuel docks are only selling to the small ferries that are delivering goods for the locals. Most of the resorts are closed down, and the airport is closed to regular airline traffic. Not sure how long things will last, but we will keep you posted as things change.”

The current global crisis is causing everyone on the planet to readjust their life and plans, but, somehow, making those adjustments in Fiji looks a little easier than in most places.

An Update from French Polynesia

Andy Turpin forwards an update from former Californian Kevin Ellis, now of Nuku Hiva Yacht Services in French Polynesia: “Don’t leave the Americas if possible — not yet. I look forward to a day when I can welcome you here on Nuku Hiva with open arms. However, this is not that time.

“The French Polynesian government is not allowing boats to come to Nuku Hiva for tourism at this time. Should you come here now, you will be required to go directly to Tahiti and not stop anywhere else in Polynesia. Should you be forced to stop, you will only be allowed to get fuel, food and water and make repairs before continuing to Tahiti.

“Everyone in the country is restricted from leaving their domiciles for anything but the bare necessities, which means boats too. All the marinas are closed, as are all of the beaches. All water sports, of any kind, are banned until further notice (no swimming). A curfew is in effect, and it is now illegal to leave your domicile between 2000 and 0500 daily. This applies to boats, too. This is in effect until April 15, and will likely be extended after that, as the number of COVID-19 cases here continues to rise.

“If you would like to stay in touch, I would be happy to let you know how the situation here is developing. We, the people who live here, are battening down the hatches for what will likely be a very difficult few months.” You can contact Kevin at Yacht Services Nuku Hiva, by phone at 87 22 68 72 or by email at [email protected]. 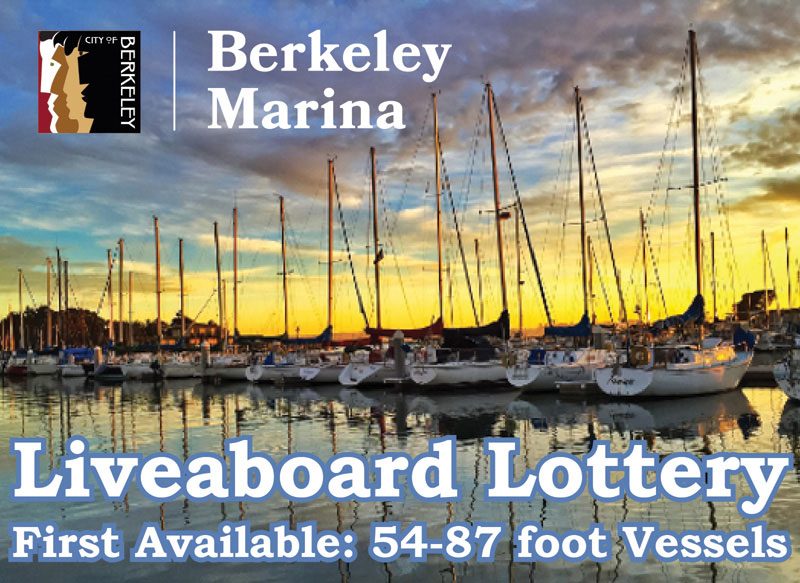 “The International J/70 Class Association has been closely monitoring the worldwide developments in the COVID-19 pandemic,” writes Chris Howell, the class’s executive director. “On April 2, the International J/70 Executive Committee met specifically in regard to the upcoming World Championship to be held July 25-August 1 (in Los Angeles). The Executive Committee has determined that, because of the varying levels of infection and disruption across the world — and the reality that any return to normal sailing activity will also vary across the world — it is impossible to assure every Class member will have a fair chance to prepare for the commitment of a World Championship during 2020. Therefore, the Executive Committee, working with the Organizing Authority, has postponed the J/70 World Championship to be hosted by California Yacht Club to August 7-15, 2021. There will be no 2020 J/70 World Championship.”

“With respect to other major J/70 Class events that remain on the schedule for 2020, the Executive Committee remains in constant discussions with these Organizing Authorities and expects to make decisions no less than 75 days prior to the scheduled date for those events,” continues Howell. “The Executive Committee will provide regular updates as needed. In the meantime, the Class wishes all J/70 sailors and their families the best in these difficult times. We look forward to resuming sailing as soon as we can.”

This follows the previous cancellation of San Francisco’s event, which was to have been held on May 2-3. The next SailGP event is still on track for August 14-15 in Cowes, UK.

The National Weather Service has issued a beach hazards statement for tomorrow due to a huge offshore swell. The timing is from 5 a.m. on Tuesday, April 7, to 5 a.m. on Wednesday, April 8. The areas affected range from south of Point Arena to Monterey, including all of Monterey Bay. Hazards include an increased risk of sneaker waves and strong rip currents.

“A long period southwest to west swell will impact the coastline beginning early Tuesday morning,” reads the statement, “and will continue into Wednesday morning before subsiding. Energetic swell periods will reach 19 to 20 seconds Tuesday morning then decrease to below 17 seconds by Wednesday afternoon and evening.”

Ever wonder what it would be like to shelter in place on the water? Oh, to be able to stick your head out of the salon, to see the cool morning light shine upon the water, and to smell the salty sea air and coffee brewing… We’ve heard from a couple of people about how the familiar sounds and smells of their beloved vessels, along with the delight of gentle rocking that comes from being afloat, can soothe some rough edges and bring presence and gratitude for what there is right now.

So many boats to search through!

Take a look at our Classy Classified ads to find your dream boat. Here’s just a sample of the many boats listed:

Looking to sell your boat?

You can list your sailboat for sale easily online. We’ve had many satisfied Classy Classified sellers with great success stories. Here are a couple of them:

“Classic wooden boats like classic art is a category of limited – but passionate – appeal. I advertised mine through an international broker who exposed her world-wide, had several keen responses including two from Europe and one who travelled from Australia, but after three years no buyer. I placed my ad in Latitude 38 less than a year ago and in months had found the right person to take stewardship of this fine boat. I finished building my new, smaller wooden craft last year and thanks to your wide West Coast reach am now sailing again AND have a good home for my faithful vessel after a quarter of a century ownership. All parties have reason to thank you, L38.” — Los Angeles, CA

“Please cancel my ad in Latitude 38 for my 1978 Islander 36. FYI, the day the ad hit the internet (two weeks before the print issue came out), I got a call from a buyer. I showed them the boat the next day. The following day they made an offer, and the sale closed last Wednesday. Thanks!”­ — Alameda, CA

The deadline for paid classy ads in the May issue of Latitude 38 is Wednesday, April 15, at 5 p.m. Pacific Time. Ads go online within three business days. 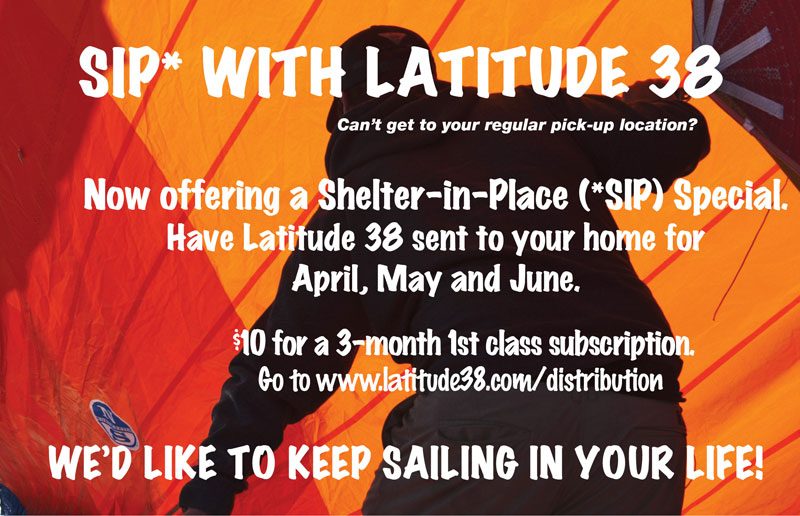