Cruiser and Latitude 38 contributor Louis Kruk checked in from Panama with a report and photos from the Bocas del Toro Regatta, hosted by Bocas Marina on February 15. The Bocas del Toro is located on the Caribbean side of Central America, in the northwest corner of Panama.

Louis owns the Bruce Farr-designed Beneteau 42s7 Cirque, with which he sailed the 2007 Baja Ha-Ha. He splits his year between a home in San Leandro and the IGY Red Frog Marina on Bastimentos Island in the Bocas del Toro Archipelago.

Molly Arnold reported on the first-ever Bocas Regatta on ‘Lectronic Latitude last March 1. This year’s race was the second edition. “Twenty-seven boats participated in the pursuit race,” reports Louis, “nearly evenly split between the monohull and multihull divisions. Both divisions were sandwiched together for the start by way of their PHRF handicaps. The race consisted of sailing twice around a triangular course. The total waypoint distance for the race was 10.3 miles. The PHRF start times had the slow boat starting at 12 noon. The fastest boat started 45 minutes later, at 12:45.” The regatta used PHRF New England ratings.

“The entries ranged the gamut from a Hobie 16 to the maxi Don Juan, a carbon-fiber Soto 73. The official race instructions said the start was between the pirate flag on the pirate ship Black Magic and the APS inflatable mark.”

Crewing on Cirque were Mark Langer and Sharon Reeves of Santa Cruz. Members of SCYC, they actively race their Sydney 38 Aboriginal and their Santana 22 Hot Tuna. They also own the Sand Dollar B&B in Bocas del Toro. Mark did the Ha-Ha in 2011. Elena Ross hails from New York and Arizona, and she’s a longtime resident of Costa Rica.

Cirque proved to be a David among Goliaths, as the results show:

Sorry to be dramatic, but we are spoiled here in California, where we demand that the weather be perfect.

The weather this February has, in fact, been objectively perfect. Spring feels like it’s already sprung, and summer itself feels as if it’s ready to start. The year-round sailing Californians have always enjoyed has been exceptional, even if the ‘winter’ breeze is a tad fickle. Yesterday, one sailor told us they were “deep in a major electronics refit” that had to be finished by Monday. “I’m glad it’s not pouring right now. This project would be [in dire straits],” they said.

As wonderful as the weather has been, it’s February, and it hasn’t rained in forever.

Californians have also been spoiled by four consecutive wet winters, and have almost forgotten about the drought that preceded them. After a phenomenal start to the winter, where the Sierra snowpack was 109% of average as of December 2019, February has gone dry. Bone dry. “California is an arid state known for long periods without rain even in the middle of winter, but this dry spell is especially long, and some Bay Area residents may be wondering: Should I be worried?” SFGate wrote. 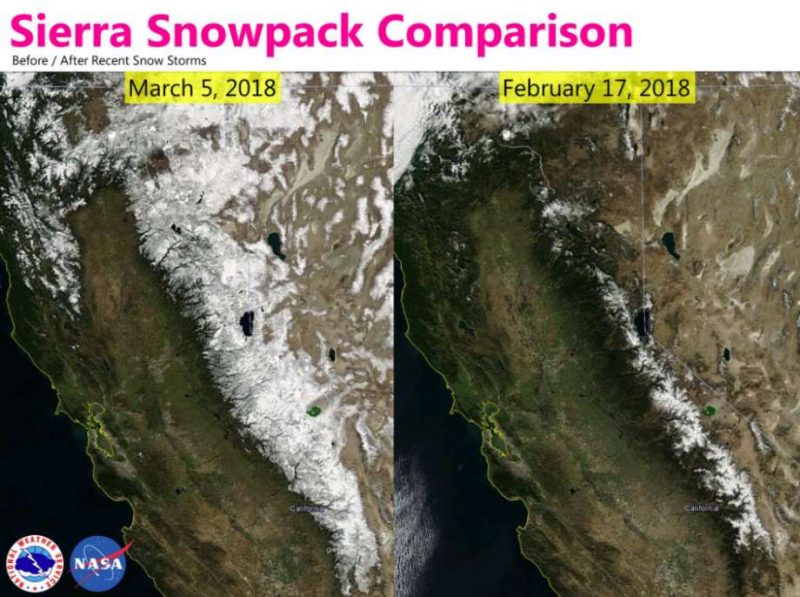 “There has only been one other year where there has been no precipitation in February and that was 1864,” SFGate said, quoting Drew Peterson, a meteorologist with the National Weather Service Bay Area. “It looks like we’re on pace to hit that again. At this point, we’re all hoping for a March miracle [a wet spring]. We’ve had them before.  This is just wish-casting.”

You might recall a warm, dry February in 2018, before Northern California got hammered with nearly three straight weeks of rain during what was dubbed (and pictured from above) ‘Miracle March.’ “Just two years ago in 2018, San Francisco went 27 consecutive days without any rain (Jan. 26 to Feb. 21, 2018),” meteorologist Scott Rowe told SFGate. “While many would like to see wet weather during our wet season, it’s not unheard of to have a dry spell last three to four weeks.”

So what is the outlook for the spring of a new decade? Long-range weather forecasts are known to be unreliable, and most of the meteorologists SFGate interviewed declined to speculate on future rain. Please take what we’re about to say with a grain of salt.

The Farmer’s Almanac is calling for cooler temperature and, yes, more precipitation in March. Granted, that same forecast also called for some heavy rain in February, so . . . yeah.

Some scientists are already talking about fire, because fires are already burning. “We have already seen an uptick in responses to wildfire calls,” SFGate reported, quoting Scott McLean, a spokesperson for the California Department of Forestry and Fire Protection, or CAL FIRE. “As of Monday of this week (since Jan. 1), we had received and responded to 207 wildfires compared to 81 in 2019 in the same period of time. These all being very small. The US Forest Service had a wildfire at the 4,000-foot level the other day near Sierraville that burned approximately 102 acres.”

How has this dry February affected you as a sailor? Have you been spending more time on the water rather than the slopes because the snow is so darn thin? Have you been getting more boat projects done? Please, let us know. 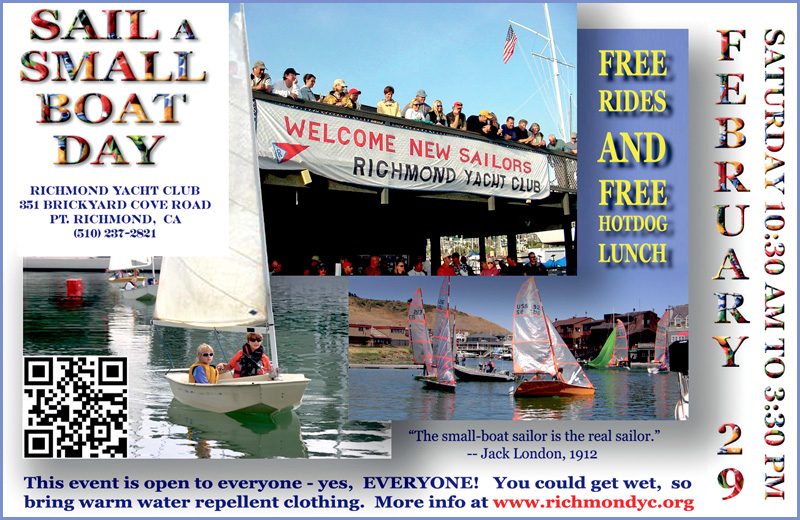 This event is open to everyone, sailors and non-sailors, young and old.

In the spirit of things already feeling like summer — and even fall — here in California, we thought we’d take a quick look at Baja Ha-Ha XXVII (that’s 27 for those of you who don’t speak Roman.)

“This year’s Ha-Ha starts with the Costume Kick-Off Party on November 1 and ends with the awards party on November 14. Entries will begin being accepted at midnight on May 8,” said the Grand Poobah and Latitude 38 founder Richard Spindler.

Sailing Has Made it into Reality TV. Great

OK, so, just admit it. How many of you watch the reality TV show Below Deck? Hey, we’ll admit that the *docu-series has occasionally been on our list of guilty pleasures over the years. No, we’re not regular viewers or even fans, but reality TV is like boxed wine. It’s not that good, but you can’t stop pouring more before you have a splitting headache and deeply regret the decisions you’ve made. (And, oh yeah, we should have put an asterisk next to ‘reality TV’ as well — there is nothing real about these shows. They are contrived to create drama and tension, or to put young, good looking people in a hot tub in the hopes that nature takes its course in front of the camera. [More on that *docu-series asterisk in a minute.])

We are only mentioning Below Deck here and now because the show is in its second charter season aboard Parsifal III, a 177-ft, Ron Holland-designed, Perini Navi-built superyacht.

So there’s a sailboat on Below Deck now. Great.

But we’re bringing up the show for another reason. A friend of Latitude — an accomplished bluewater singlehander — was recently approached by Below Deck‘s casting department. “Hi! I’m casting the next season of Below Deck Sailing Yacht,” the email read. “Not sure if you’re familiar, but Below Deck is a docu-series that follows a group of experienced yachties that are working and living about a luxurious mega-yacht. It’s a six-week paid gig, and I’m looking to casting all positions! You look amazing, so we wanted to see if you’d be interested in chatting. If you’re booked but know [of] someone who might be a good fit, send them [our] way!”

Our friend was amused by the solicitation. “I’m a [redacted] captain,” she said, laughingly using an expletive in good-natured emphasis. “Do you really think I would be interested in being a stewardess on a megayacht!?” Our friend was quick to point out that she respects yachties and stews, but that her life is on a far different trajectory now, and such a position would be a monumental demotion from her current adventure. She also pointed out the term *docu-series. “Really . . .? Isn’t it just reality TV?”

(By way of a disclaimer, we also want to say that several of us here at Latitude have worked on yachts through our sailing careers. And several of us watch reality TV, and enjoy it.)

What do you call a pirate who skips class? Captain Hooky.

What kind of grades does a pirate get in school? High seas.

Little Johnny meets a pirate with a wooden leg, a hook, and an eye patch. The boy asks, “Wow Mr. Pirate, what’s the story with your leg, sir?”

The pirate answers: “A shark bit it off.”

Johnny replies, “Cool… and what happened with your hand?” The pirate answers, “Another pirate chopped it off in a sword fight.”

The boys is beyond awed and keeps on, “And what happened to your eye?!” The pirate replies, “Um, a seagull pooped on it.”

The boy is astonished, “Oh boy, you can lose an eye from that?!” The pirate shrugs, “Not normally, but I’d only had the hook for about a day when that happened.” 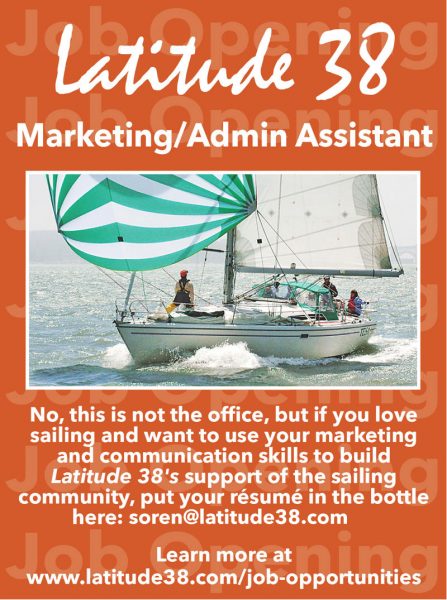 Latitude 38 is currently looking for an enthusiastic sailor to work with us full-time as an assistant in marketing, communications and events.

Latitude 38 is the West Coast’s premier sailing magazine and media company founded in 1977 to cover the world of sailing through the eyes of the West Coast sailor. We are passionate about West Coast sailing and our home waters of San Francisco Bay. We publish a monthly magazine, a 3x/week blog, an annual Northern California Racing Calendar and the annual Pacific Sail and Power Boat Show Guide and Program. Latitude 38 also sponsors the Baja Ha-Ha, the SoCal Ta-Ta and the Pacific Puddle Jump cruising rallies, produces the Delta Doo Dah and supports and manages the annual Summer Sailstice celebration of sailing.

Position: Seeking an active sailor to provide marketing and administrative support for a staff of seven people. We are looking for a creative and energetic person with strong communication and organizational skills and work on their own initiative to develop successful marketing strategies in the evolving worlds of sailing and media. Must be able to manage and deliver on multiple projects simultaneously. The right candidate will provide assistance and support across multiple departments working at our Mill Valley offices with our talented editorial and advertising staff. END_OF_DOCUMENT_TOKEN_TO_BE_REPLACED

SHARE ON Tweet Share Email Linkedln
Leave a comment
Receive emails when 'Lectronic Latitude is updated. SUBSCRIBE
'Lectronic Latitude: Wednesday, Feb 19
IDEC Sport's Asian Tour
Joyon Smashes Tea Route Record
After 31 days, 23 hours, 36 minutes and 46 seconds of sailing, Francis Joyon and his crew set a new record for the Tea Route between Hong Kong and London this morning.
Lake Tahoe
The Worst Time of Year for Northern California’s Best Sailing Destination
It’s no surprise that we so often find sailors in the mountains. We have often said that while seemingly disparate, skiing and sailing go hand in hand.
Sponsored Post
Westwind Boat Detailing
Washing, waxing, varnishing. Serving the entire Bay Area for more than 25 years. “Boat looks great. Please pass my thanks to those who did the work."
Bogus Boat BS
Sailing to the Ends of Sanity and a Flat Earth
We don’t quite get websites that intentionally run bogus stories. Well, okay, some ‘articles’ are amusing and we guess that sells ads.
Latitude 38 Crew List Party
Make Plans to Attend Our Spring Crew Party
Meet and greet fellow sailors. Find crew or get on a boat. Thursday, March 5, 6-9 p.m. Held at the spectacular Golden Gate Yacht Club in San Francisco.
More 'Lectronics »
Report Listing