On Wednesday, we reported on the New Year’s Eve storm that wreaked havoc across California. As another string of storms is approaching we’re sharing a couple more photos of two boats that didn’t fare well. It’s always a reminder to do whatever you can to secure your boat during the winter weather. Extra dock lines, extra fenders, removing your roller-furling jib or at least rolling it tight and wrapping a spinnaker halyard around it, making sure your bilge pump is clear and working, and generally battening down the hatches.

After last weekend’s storms, all looked bright and beautiful at South Beach Marina. However, frequent Sailagram contributor Kerry of the sailing yacht Cetacea sent in the photo below of a sunken boat at the docks at South Beach. He reports it wasn’t a storm that sank the boat but a bilge pump. How? The pump was pumping out the boat and, after exhausting the battery, it reversed flow and siphoned the water back into the boat, eventually sinking it at the dock. As Kerry said, “Sometimes safety equipment actually causes the emergency.”

At Antioch Marina, an Ericson 34 ironically named Outatime also sank at the docks. The cause is currently unknown, but yet again is a reminder to do all you can to secure your boat and check to make sure all systems are working ahead of the upcoming storms. It’s also a good reason to stay connected to your friendly dock neighbors or marina liveaboards, who are sometimes able to help remote owners who can’t get to their boats!

We know people have suffered losses, but hopefully this photo sent by KKMI can add a little humor to the situation.

Travis Marina, near the Golden Gate Bridge, held up well enough that the sailboats all came though unscathed, but the outriggers stored on the beach didn’t fare so well.

Elsewhere in California, the storm whipped up the ocean and sent enormous waves barreling onto the shore.

The weather app Windy.com posted this clip on its Facebook page.

The upcoming week looks full of more threatening storms. We hope everyone gets through unscathed. For more preparation advice, you can read the story in our January 2021 edition by Mary SwiftSwan of Afterguard Sailing Academy about lessons learned from the October 2021 storm that destroyed one of their boats on the shores of Brooks Island. You can also listen to the story in a recent edition of Good Jibes.

We came across an interesting situation yesterday, in which a woman is trying to locate her mother’s sailing partner from the ’70s. She reached out to social media, and we’re reaching out to you, our readers. We know the ’70s were a pretty wild decade for many, and of course there is the possibility that some of those many don’t really remember those years, but perhaps something here rings a bell and someone can add some light to the mystery at hand.

The sailor in question is Joël Bernard, a French sailor who was in San Francisco at some time in the ’70s. It’s estimated that he would now be aged somewhere between 67 and 74.

The story is that together, the mother and Bernard sailed through Hawaii and French Polynesia. He is described as “about 5’4″-5’6″, skinny, with blue eyes.” Of course, this being 40 or so years ago, his physical appearance may have changed somewhat.

The daughter writes, “My mom thinks maybe he isn’t alive anymore, but I was thinking it would be cool if we could find him and they could reminisce [about] their sailing adventures. She told me she never believed in God until they were out on the open ocean with 40-foot waves and they had to tie down. I’d love to hear stories about her from his perspective too.”

The request has already generated numerous comments, some merely offering support, and some putting forth a crumb or two. So far, it seems, none have resulted in the prize. Though one person did ask about the boat, which in turn produced another clue. It is now believed the boat was “the yacht Sundowner, built by a designer named Dreamer in Costa Rica.

“I know this is vague, but it would be really neat to reconnect. My mom is not in good health and it would be bittersweet to find her long-lost sailor boyfriend 🤣🤣”

We agree, it is vague, and even more so because we’ve omitted the woman’s name. But we’ve done so out of respect for her privacy (and yes, we realize there is no privacy on social media; we’re merely trying to stem the flow).

If you have any information or recollections that you think may be relevant, please let us know in the comments below, or drop us an email at [email protected], and we’ll put you in touch. 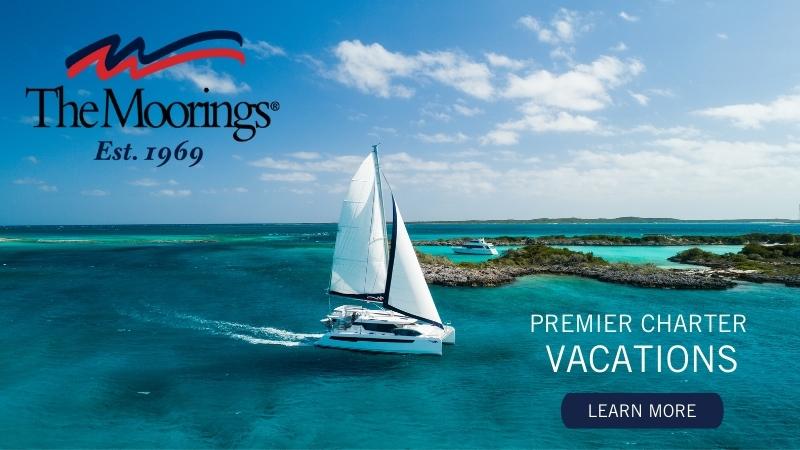 Sometimes bad memories bring up good memories. When tragedy struck on September 11, 2001, it caused enormous pain, trauma and damage that still haunts the world. It disrupted our lives in ways large and small. One of the big events in our local sailing lives is the Rolex Big Boat Series, which, when measured against the scale of 9/11, can feel small. In the midst of our national trauma, the St. Francis Yacht Club did what essentially everyone had to do and called off the Rolex Big Boat Series days before it was to begin.

Without the Rolex Big Boat Series story for our October 2001 issue, our race editor, Rob Moore, wrote a retrospective on all the Big Boat Series since 1964 when, at the time, “Young Bob ‘RC’ Keefe convinced Commodore Stan Natcher that St. Francis YC should create a series to showcase big boat yachting talent from around the world.” That’s where we have some good memories that came forth from the bad memories of that September terrorist attack.

A lot of regattas are on the calendar for this weekend. The first weekend of the month is the busiest for midwinters on San Francisco Bay, but some clubs are canceling tomorrow’s races. “Winter Series #3 scheduled for January 7, 2023, is cancelled for safety concerns,” wrote Stan Phillips of Sequoia Yacht Club in Redwood City.

He pointed to the forecasts for 2:00 p.m. on Saturday:

“Flotsam in the water will be difficult to see in these conditions. News reports included notice that San Francisco sewer treatment plants overflowed, with warnings not to swim in the Bay,” added Stan.

Golden Gate YC, Tiburon YC and Vallejo YC have also canceled their races scheduled for Saturday. So far, Encinal YC’s Jack Frost race is still a go, but that could change. Update as of January 6 at 4:30 p.m.: “Encinal has canceled the Jack Frost race for Saturday with a make-up on 3/4/23,” says Charles Hodgkins, PRO for the Jack Frost Series. He sent this message to the registered skippers: “After consulting the EYC flag and reviewing the available wind models for Saturday that all have gusts 30+ knots over an ebb tide, we have decided to abandon racing on Saturday and re-schedule it on March 4.”

Sunday’s forecast is not quite as foreboding as Saturday’s, and a couple of Bay Area clubs have races scheduled. “So far this series the weather gods have given us excellent racing conditions,” wrote Mary Wand of Sausalito YC, which runs a Chili Midwinter Series.

“We are hoping our luck continues this Sunday, but the weather and wind forecasts are inconsistent, generally showing a rainy morning with a dry afternoon and moderate winds, but with some predicting a wetter and windier afternoon. A little rain won’t hurt us, but if the conditions appear to be dangerous, we will make the decision to abandon or postpone ahead of the noon first warning. Any announcement will be made from shore, as described in Section 7 of the Sailing Instructions, but also please watch your email on Sunday morning. We will notify all racers of our decision prior to the time you need to leave your dock and arrive at the starting area.”

Update as of January 6 at 4:45 p.m.: “As of this moment, the Richmond YC Small Boat Midwinters are still a go for Sunday, January 8,” writes Nancy Pettengill, race chair for the RYC series. “It appears that the weather gods have granted us a brief window of opportunity to sail during the midday hours of Sunday. We’ll be making a final go/no go decision at 10 a.m. on Saturday, January 7. RYC will be posting the status of the midwinters on the RYC web page and Facebook page in addition to notifying all registered competitors and all of our volunteers.”

Check with race organizers if you’ve got racing in your plans for the upcoming weekend, and feel free to comment below with inside intel (but not criticisms, please). We’ll update this story if we receive more information. 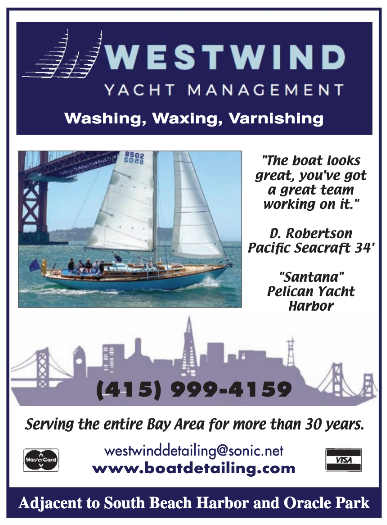 SHARE ON Tweet Share Email Linkedln
Receive emails when 'Lectronic Latitude is updated. SUBSCRIBE
'Lectronic Latitude: Wednesday, Jan 4
Here We Go Again
Wild Winter Weather Marks Transition Into New Year
The entire San Francisco Bay Area and central coast are on alert for damaging gusts, flooding and landslides as a result of another severe weather system tonight.
The Sounds of Sailing
Good Jibes #72: Dr. Paul Heineken on Championing the Next Generation of Sailing
Paul is a lifelong competitive dinghy sailor, windsurfer, supporter of junior sailing, and former commodore of the St. Francis Yacht Club.
Sponsored Post
Power the Perfect Experience With Volvo Penta
Powering the perfect experience with Volvo Penta: Engines, Parts, Service.
Locals Take the Prizes
Kenichi Horie, Mary Crowley, Cal Currier Win Cruising Club of America Awards
The West Coast figured prominently in the Cruising Club of America's prestigious 2022 awards list.
Advocating for the Waterfront
Want To Have a Say in What a Pedestrian Bridge Over the Oakland Estuary Might Look Like?
How tall will the bridge be? How will it affect boats sailing on the Estuary? How often does the City expect the drawbridge section to be opened on a typical high-water-traffic day (aka the weekend)?
Sailing In Pictures
Sailagram: A Snapshot of December Sailing
It was a great year for sailing, and we want to thank everyone who contributed photos to our 2022 'Sailagram' feed each month.
More 'Lectronics »
Report Listing