For the past three days, anxious rumors have spread on the coconut telegraph — and around the Richmond Yacht Club bar, where a celebration of the club’s 90th birthday was in full swing. This morning, the Pacific Cup’s principal race officer, Michael Moradzadeh, sent out this message:

“Pacific Cup race organizers are happy to report that Andy Schwenk (57, Point Richmond) has been brought safely to land by a combination of Coast Guard, Air Force, commercial shipping and assistance from a fellow yacht. A rapidly spreading infection required the action.”

“Andy’s Spindrift V, an Express 37, had completed the 2022 Pacific Cup, finishing first in her class on July 18. Returning to California, the boat faced heavy weather, damaging their mainsail and leading to an injury to Andy’s ankle, which subsequently became infected. Various elements of Spindrift’s communications tools were also damaged, leading to challenges in getting assistance.

“A relayed call to Pac Cup race organizers led to the diversion of fellow racer (and division winner) Surprise, owned by Bob and Maryann Hinden and skippered for the return by Robin Jeffers, diverting to transfer antibiotics to Spindrift V. The August 4 1 a.m. transfer was a ‘real pro job,’ as Andy later texted. Because of Spindrift’s communications problems, many of the communications in this incident were routed through systems that had been established to manage the race itself. When the boats couldn’t make direct contact, a lot of coordination took place on my iPhone,” commented Moradzadeh.

“The infection progressed. After a number of consultations with medical consultants at George Washington University (who had been retained to provide medical support), they, and ultimately US Coast Guard, recommended a medical evacuation. Taiwanese oil and chemical tanker FPMC35 diverted from its course to Panama to collect Andy (another midnight transfer) on August 5.

“Two medics parachuted to the FPMC35 from a C-130 aircraft and stabilized Andy’s condition as the tanker steamed at high (12-knot) speed toward San Francisco.

“On August 7, an airborne flotilla comprising two Blackhawk helicopters, two refuelers and two C-130s combined to collect Andy and the medics and deposit them at Moffett Field. Andy was transferred to Stanford Hospital where he is reported to be in stable condition.

“A veteran of dozens of crossings and over 300,000 ocean miles, this is the first time Andy has had to call for help, and he has expressed his thanks for the support. ‘We’re incredibly grateful for the actions of Surprise, the FPMC35, the Coast Guard and the Air Force, and our consultants at George Washington University’s Maritime Medical Access team,’ said Pacific Cup Commodore Jim Quanci. ‘Without the concerted action of all these responders, Andy’s situation could have been much worse.’

“Spindrift V is proceeding toward the Golden Gate under the command of the remaining crew, including the very experienced Peter English. Traveling at 6.25 knots, Spindrift should arrive in about five days.”

You can see where Spindrift V and the other Pac Cup boats are on the tracker here.

Susan Hubbard, a staff commodore from RYC, shared this bit of news this morning: “Surgery went well. Andy is in recovery and in good spirits. No visitors for fear of contamination as they grow the cultures that attacked his leg.” Andy, an RYC member, is a professional delivery captain and rigger. Latitude readers might be familiar with him as a contributing writer.

Lee Johnson, who was on the delivery crew for the Vic-Maui Race boat Annie M, John McCarthy’s Alameda-based Amel Mango 52-1, described the conditions as, “Mostly just bad weather that sometimes leads to gear/boat issues. I don’t have a count, but everyone seems to think many more than usual had to turn back. Our weather was nothing special (20-25 knots, 6- to 10-ft seas, the usual squalls).” Annie M turned back because the boat had “begun taking on water from an as-yet unknown source.”

We don’t want to get too far ahead of a story, but is it true that Santa Cruz 27s are experiencing a renaissance? John Krossa of the Morro Bay Yacht Club wrote a story in our current August issue about the club’s budding new fleet of four Santa Cruz 27s. It was enough energy and activity for the SC27 class to decide MBYC is the place to host the 2022 Santa Cruz 27 Nationals on September 3-5.

Coincidentally, the day before the new issue came out, Heather Davies wrote in to say the Santa Cruz 27 Sorcerer’s Apprentice (Hull #85) was out for her first play date with her new owners at the Encinal YC Estuary Extravaganza. Heather said new sails are due soon but the boat probably won’t be race-ready in time for the Nationals.

This was followed by a note from author John Krossa, saying he had done his first overnight race ever by taking his SC27 Janina on the Santa Barbara to King Harbor Race with his boat partner Mark Hilden — and they won in class! It’s an 81-mile Southern California classic downwind slide and the perfect race for the SC27. Team Janina took 24 hours and 14 minutes to beat the other five boats in class. Full results here.

John reports the race attracted 77 boats that entered in eight different classes. Only 58 boats finished. Janina was the smallest boat in the race and corrected at 33rd overall: a fun but tiring first-time experience.

The Catalina 34T Squall was close at hand capturing this shot of Janina carrying it close on her way south to King Harbor.

134 of the Bill Lee-designed Santa Cruz 27s were built, with the first one launched in 1974. With a new fleet sprouting up in Morro Bay and a number of Santa Cruz 27s changing hands in the past few years, the fleet is maintaining the energy and enthusiasm that brought the “Fast is Fun” style to California sailing. 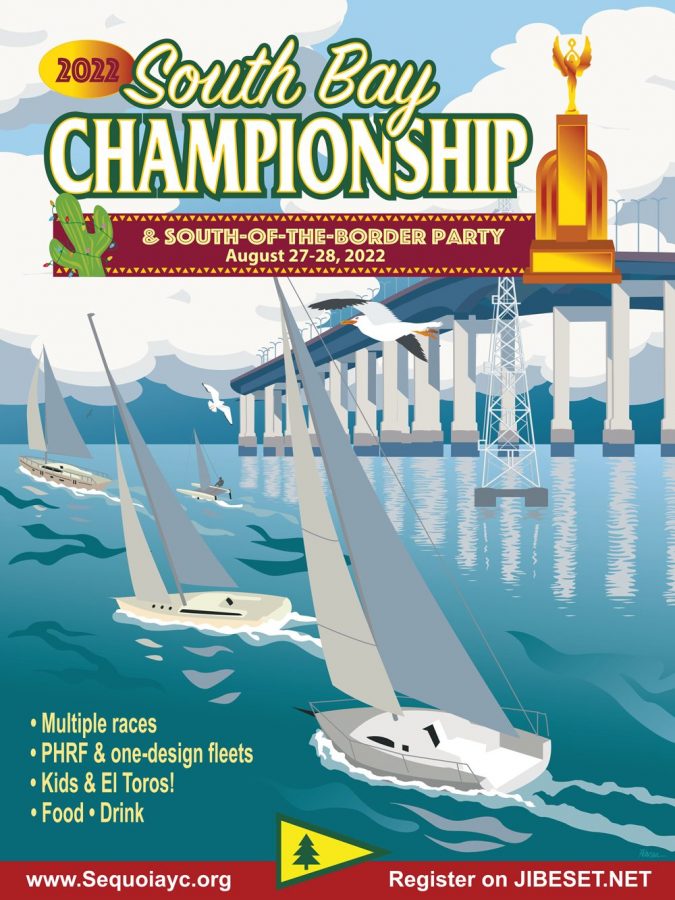 Don’t miss the South Bay Championship and South of the Border Party, August 27-28. Sign up on jibeset.net.

“I don’t know much about R boats, but I found a few images, I believe, in an old issue of Yachtsman at the Nautical Library at Fort Mason. R boats seem large, narrow and well canvassed.” 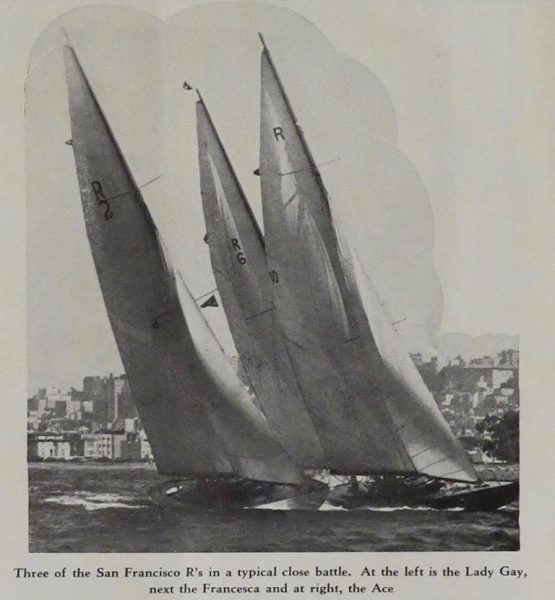 On a recent trip to Australia we took a flight to the country’s west coast in search of the coveted America’s Cup. Of course, we know the Cup itself no longer resides Down Under. We did, however, imagine the town of Fremantle, the base for the 26th challenge in 1987, would be in itself a shrine to that memorable day four years prior, when the crew of Australia II wrested the Cup from the Americans. One would think that with such a history, the city would have named everything after the great event, and that finding signs and idols would have been easy. But alas, it was not so.

The day began with a drive from Perth to Fremantle, hoping along the way that we would find a marker on the map — something like “Home of the America’s Cup Winners,” or “America’s Cup Here,” with a big, bold arrow. We found neither. So instead we looked for the Royal Perth Yacht Club, thinking there we would find the memorabilia we sought. We were met by a locked gate and no idea if there was any point in trying to talk our way into the club. So we opted to ask at a nearby hotel reception desk if there were any local nods to that famous moment when Australia II, built and owned by a syndicate of Western Australians (or Sandgropers as they’re lovingly known by the rest of the country), sailed to victory in Newport, Rhode Island.

“If you walk down the road you’ll find a historic trail with information plaques,” the nice lady told us. Off we went.

There were indeed plaques, mounted on not-quite-waist-height bollards, each featuring one of the boats that raced in the 1987 America’s Cup.

By the time we’d completed the entire length of the trail, we were better educated, but somewhat disheartened, and a little thirsty. A little lunchtime beverage might help us reassess our mission. It was then that we were surprised by a statue of a man who looked more than a little familiar. The original front man for the iconic ’70s rock band AC/DC stood before us — the legendary Bon Scott. This was the kind of thing we were looking for: a permanent reminder of a significant point in time — but with sailboats.

Fortunately, as we made our way to the nearest tavern for a refresher, our local companion said, “What about the maritime museum?” There is one? Perfect. Surely there we would succeed. And we did.

The Western Australia Maritime Museum proudly displays its colorful boating history, including the America’s Cup win in 1983, and even the boat itself.

On our way to the museum we were reminded about the Australian prime minister, Bob Hawke, who uttered those infamous words at the successful conclusion of Australia II‘s challenge: “Any boss who sacks anyone for not turning up today is a bum.” What we didn’t remember is that at the time, Mr Hawke sported a very patriotic-looking jacket.

It took us most of the day, but we were happy that we had succeeded in our mission to find the America’s Cup in Fremantle, Western Australia. And while Australia has so far only won the challenge once, we still felt a certain degree of pride and nostalgia as we gazed up at the famous winged-keel boat that almost 40 years ago beat the centuries-long Cup holders. 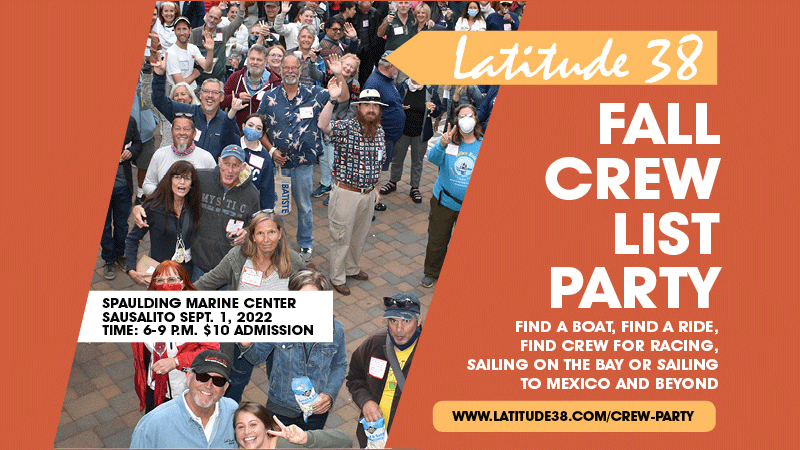 The Latitude 38 Crew List Party is returning on Thursday, September 1st at the Spaulding Marine Center. Join us for an evening of mingling with other sailors. Find a boat, or find a ride for sailing on the Bay and beyond. Get your tickets and more info here.

SHARE ON Tweet Share Email Linkedln
Receive emails when 'Lectronic Latitude is updated. SUBSCRIBE
'Lectronic Latitude: Friday, Aug 5
Wing Sailors and Windsurfers
Foiling Through the Frisco Fog
On a really dark Friday afternoon, the St. Francis Yacht Club hosted wing foilers and windsurfers for some course racing.
Digging Deep in the Bay Area
Speak Up To Allocate Available Federal Dredging Funds
Dredging has kept Bay Area waterways open for over a century. It's an ongoing process that needs the support of boaters and businesses to keep these waterways open.
Sponsored Post
Join Us for the Fall Crew List Party
The Latitude 38 Crew List Party is returning on Thursday, September 1st at Spaulding Marine Center.
Can She Be Revived?
Bay Area Sloop ‘Pursuit’ Brings Back Fond Memories
Readers share their memories of Ron MacAnnan's M-class sloop, 'Pursuit.'
Plywood Can Be Fast
The Story Behind the Winning Plywood Boat ‘Pell Mell’
Overall winner of this year's California Offshore Race Week, 'Pell Mell,' underwent a year-long renovation before claiming her first-place title.
Sponsored Post
San Francisco on the Bay: “Trail Guide”
Discover San Francisco Bay and all that inspires those of us who live or visit here.
More 'Lectronics »
Report Listing