Last week we reported that California sailor William ‘Bill’ Austin was missing in the Sea of Cortez after his boat was found washed ashore on a beach north of Nopolo, near Loreto, on March 12. Two days ago we received word that fishermen in the area of Punta Lobo, Isla del Carmen, had found a body in the water. The report, issued by Subsecretaría de Proteccíon Civil BCS, stated that the body was to be recovered by naval authorities and Civil Protection and been taken ashore for identification.

Yesterday we learned that the body has been identified as that of William Walter Austin III of Marina del Rey.

Boatwatch.org, an organization that assists in helping locate all overdue and missing vessels, shared a report from the Facebook group Expresionbcs.

“Sources from the General Prosecutor’s Office of State Justice (PGJE) have confirmed that unfortunately, the body located this morning in the vicinity of Punta Lobos, Isla del Carmen, Municipality of Loreto, corresponds to the North American, William Walter Austin III.”

The report further advises that the cause of death is still to be determined.

To date, this is the only information we have been able to find about the situation. We therefore ask that readers please be mindful of this when sharing or commenting on this story.

We are heartbroken to learn that we’ve lost a member of the Baja Ha-Ha fleet. Austin had sailed to Mexico with the 2021 fleet, and judging by the comments to our story last week and on social media posts, he was a well-liked and well-regarded sailor. We know he had big plans to enjoy the Sea of Cortez and perhaps the coast of Central America, and that he had a dream of sailing the Med with friends and family.

Our sincere condolences to his family and all who knew and sailed with him.

The Slalom event took place on March 17. This innovative format consists of a solely downwind race in a knockout format. Every sailor was guaranteed at least three races, with the final of the three forming the start of the knockout stages. As the day went on, the breeze stiffened and the sea state picked up, which had even the most experienced sailors fighting to keep their boats under control.

After a lot of sketchy jibes and a few accidental swims, Reed Baldridge emerged the champion of the downwind course from a grand final of 10 sailors. The farthest-traveled sailor of the competition, Nick Zeltner of Switzerland, took second place. Local Waszp sailor Hoel Menard took third. Massive respect to all of the sailors who were sending it at full throttle in the notorious San Francisco chop for the Slalom!

A Visit to SailGP

Following the Slalom, competitors had the chance to head over to the SailGP tech site ahead of the SailGP Grand Final in San Francisco this weekend. The skipper of the French team, Quentin Delapierre, welcomed the Waszp fleet onto the French F50 for an in-depth tour of the boat.

Some of the youngsters had their sights set on the SailGP Inspire Waszp Grand Final, also taking place this week in line with SailGP. Jaime Framis Harguindey (ESP) and Zac Blomeley (GBR) won their respective home SailGP events and were racing in the Americas in the lead-up to Inspire.

The under-21 sailors to represent the USA in the Inspire final were to be decided from the results of the Americas. Delapierre really helped the sailors realize what could be at stake for those hoping to get their foot in the door of the world’s leading professional sailing circuit. There is every chance that some of those Waszp sailors stepping onto the F50 in awe that night will be racing on the SailGP circuit in a few years’ time, thanks to Waszp’s close partnership with the circuit.

The Americas championship title was decided from three days of classic windward/leeward racing on March 18-20. Weather forecasts and locals regularly disagreed on what they thought might happen with the wind, but when it was time to hit the water, the sailors always enjoyed near-perfect foiling conditions on the Bay.

Nick Zeltner (SUI), Jaime Framis Harguindey (ESP), Reed Baldridge (USA) and JP Lattanzi (USA) all showed great form in the early stages to position themselves firmly in contention. The second and third day of racing saw slightly patchier conditions that punished sailors who dropped off the foils. Baldridge began to suffer with inconsistency, making it a three-horse race on the final day between the Swiss, Spanish and Hawaiian sailors aged 20, 19 and 17 respectively. Lattanzi and Zeltner were tied, with Framis Harguindey two points behind. Lattanzi had the best discards so far, so was the mathematical favorite.

Three races were sailed on the final day. The standout performer of the day was Gavin Ball from Hawaii, who scored a second and a first in the final two races to pull himself up to the podium. Ross Banham from the UK did enough to sneak ahead of Reed Baldridge to take fourth in the open event. Zeltner and Framis Harguindey put in impressive performances to keep their title hopes alive, but in the end couldn’t shake JP Lattanzi. The 17-year-old continued to score consistent results at the top of the fleet to seal the win in world-class fashion. The Hawaiians are really showing what they can do thanks to their hard work and tight training group. JP Lattanzi has sailed himself into the spotlight as one of the USA’s future sailing stars.

JP qualifies for the SailGP Inspire Grand Final in San Francisco alongside his sister Pearl. In 2021, the Lattanzis’ teammate CJ Perez, also a Hawaiian Waszp sailor, earned her spot on the SailGP USA team racing on the F50. So the Lattanzi siblings know exactly what is achievable if they show their best performances on the water this week.

The first-ever Waszp Americas was a standout success in the international calendar. It’s now set as a foundation for the class to grow in the Western Hemisphere. Click here for complete results. The North American fleet is on the move with more events scheduled in 2022 and beyond. Waszp is accepting bids from venues in North and South America for the 2023 and 2024 Waszp Americas and the 2024 Waszp Games.

Welcome back to Good Jibes! In this week’s episode join host Nicki Bennett as she chats with Ros and Nathan de Vries about building your crew and giving opportunities to new sailors. Ros is the 2022 commodore at Island Yacht Club and frequently races with her husband, Nathan, who picked up sailing after moving from Australia to California.

Hear how to sail and race (and stay together) as a couple, find the right roles for everyone on the boat, establish great communication with your crew, and welcome and connect with those new to the sailing community, and what you can learn from junior sailors.

This episode covers everything from relationship advice on the water to building a dynamic racing crew. Here’s a small sample of what you will hear in this episode:

This episode is brought to you by Svendsen’s Bay Marine.

Boat shows are officially back in the Bay Area. Come down to Svendsen’s in Alameda on April 9 from 9 a.m. to 5 p.m. for once-a-year deals from your favorite vendors. Stick around for a DJ, food truck, and a ton of raffle prizes. Get to know your favorite names in the industry and have a great day doing it. Entry and parking are free! Get all the info at svendsens.com/boatshow2022. We hope to see you there!

If you’ve been driving by or sailing on the Bay this week, you must have noticed that the SailGP fleet is now out and practicing for this coming weekend’s SailGP — Mubadala United States Sail Grand Prix San Francisco. This is the final showdown for the $1 million in prize money to be awarded to the winning team at the conclusion of this 2021/22 season here on San Francisco Bay.

Things started out with some excitement as the teams took to the water on Monday — the American SailGP team capsized during training. All the sailors were safe, including Red Bull athlete and big-wave surfer Kai Lenny, who was along for the ride. The team’s F50 catamaran sustained minimal damage and was sailed back to the dock. Apparently the cause was a systems failure aboard the boat.

SailGP Team USA is one of two teams who have already clinched a spot in Sunday’s winner-take-all Grand Final race, where they will square off against the Australians and an as-yet-to-be-named third team for the season championship title.

Warm-up problems aside, the real question is, can someone upset Tom Slingsby and the Australian team, who have had a long, steady run at the top of the leaderboard? To sort this out, five fleet races will lead up to the three-team final. On points, Australia and the United States are already guaranteed a spot in the finals, with Nathan Outteridge and the Japan SailGP team a leading contender for the third spot. For more detailed insights into how the championship works, click here.

The idea of foiling had been around for some time, but it was the 2013 America’s Cup on San Francisco Bay that put foil sailing into the mainstream. From kiteboards on the Cityfront to the America’s Cup and everything in between, the world of sailing was lifted into the third dimension by the 2013 Cup. Now Russell Coutts and a league of sailing all-stars are in town for the final showdown of Season 2. It should be fun to watch from land or sea. Learn more and get tickets here.

After a two-year pandemic hiatus, the Clipper 2019-20 Race did a ‘soft restart’ from the Philippines on Sunday, with 11 yachts crewed by amateur sailors departing for the North Pacific crossing to Seattle.

The 6,100-mile race, named the ‘Sailing City — Qingdao Cup’ in honor of the Chinese city represented in this edition, is expected to take just over a month. The teams will compete in one of the world’s most inhospitable places: the North Pacific Ocean. Some 150 race crew from diverse walks of life will face frigid temperatures. Hurricane-strength Force 12 winds are not uncommon. Fast sailing will definitely be on the menu. The crews will have some of the most exhilarating sailing experiences that can be gained anywhere in the world.

The North Pacific will likely have very wet and wild conditions throughout the vast majority of this race.

The Clipper Race fleet left on March 20. They’re spending four days making their way up the west coast of Luzon, Philippines. These first four days are the final offshore race training and fine-tuning ahead of the actual Le Mans race start on March 24.

Tune in tomorrow to see them on their way.

We’re so excited to launch our first Sailing Club Open House! If sailing is already your passion, or you want to get into the sailing lifestyle without the costs of owning a sailboat, come join us this coming Saturday. 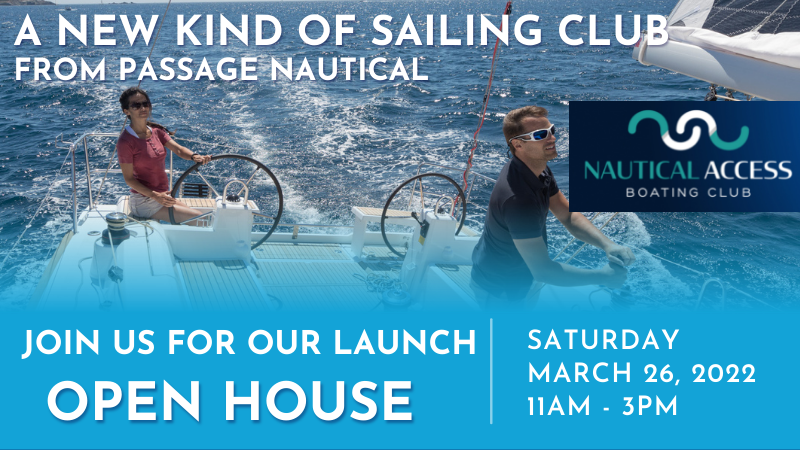 Our sailing club is perfect for you if:

To learn more and sign up go here: https://www.eventbrite.com/e/nautical-access-sailing-club-open-house-tickets-288891711887