Britain and Japan Collide in Australia

With 15 seconds left on the countdown to Race 3 yesterday, a collision between Great Britain and Japan took both teams out the race — and out of the remainder of the Sydney SailGP regatta. As a result of the major damage caused to the Japanese boat, Britain received 6 penalty points in the event and 2 points for the season. The British team will finish in last place in Sydney.

As the UK crew was focusing on closing the gap to the American boat in the pre-start, they didn’t see the Japanese boat. That error resulted in a significant crash, but no one was hurt.

“We were coming back in the final moments of the start, fighting for the top of line in a defensive mode against the Americans,” explained the British skipper, Sir Ben Ainslie. “We just didn’t see them at all, which was devastating for both teams.

“Everyone was OK, which is the most important thing. But sadly it probably means the end of our season as we receive hefty penalty points for the damage caused. It will also impact Japan, which is not what we want. As is only correct, we are giving them our F50 and any support they need to hopefully get back out racing tomorrow.”

The Japan boat skipper, Aussie Nathan Outteridge, wasn’t giving up hope of racing on Day 2. “Ben said if there is anything he can do to get us racing tomorrow he will help. I appreciate that. Our goal here in Sydney was to maintain that buffer in the championship standings.”

“The first two races were great to be involved in,” added Ainslie. “It’s super-tight racing out there and all the teams were pushing super-hard, so this was hugely frustrating for everyone. But that’s sport, and we will dust ourselves off and go again in San Francisco.”

But Spain Was Brilliant

The day belonged to the Spain SailGP Team. Kiwi driver Phil Robertson led them to three top-three finishes to sit atop the event leaderboard.

“Racing’s pretty close,” said Robertson. “There’s a lot of pressure there. Everyone wants to be making that final in San Francisco, so boats are going to crash and they’re probably going to keep crashing. We’ll keep doing what we are doing and maybe we can sneak our way into the Grand Final in San Francisco. I’m hoping the team come full-focus tomorrow. It’s going to be windy. We need to be looking at this event, these races, and not next season or anywhere else.”

Racing on home waters, Australia’s Tom Slingsby had a mixed day of results: a win in chaotic Race 3, third place in Race 1, and a disappointing seventh place in Race 2. His team sits in second with Jimmy Spithill’s US team after Day 1, 5 points behind Spain.

The Americans overcame a slow start — sixth place in Race 1 — to finish on the podium in the next two races. They scored third place in Race 2 and second in Race 3.

Action will resume on the second day of the Australia Sail Grand Prix at 5 a.m. GMT tomorrow, Saturday, December 18 (that’s 9 p.m. tonight, Friday the 17th, on the West Coast of the US).

You can watch a two-hour recap video of Day 1’s three races at https://sailgp.com/news/21/live-stream-australia-sail-grand-prix-sydney-race-day-1. The collision at the start of Race 3 comes at 1 hour, 33 minutes in.

Chuck Hawley wrote us a letter about Webb Chiles, which will appear in the January issue of Latitude 38. We wrote him back to check on the name, type and homeport of his current boat. He replied, “Just sold her, but she’s still in my driveway. Soleil, Harbor 20, Santa Cruz, CA.”

Chuck went on to say, “I’m looking for a similar boat that is easier to ramp launch at a very marginal ramp at Fallen Leaf Lake. Looking at Ultimate 20s and Open 5.70s. My second-most-recent boat was Surprise, an Alerion Express 38 yawl, several Zodiac Pro Open 650s, a Megabyte, a Viper 640, a 15-ft Whitehall, and so forth. I love boats.”

We’re going to assume he doesn’t want a foiling cat or some other exotic boat. Given what we know, what would you recommend to Chuck? We thought about an oldie-but-goodie centerboard Rhodes 19, but that sounds way off the mark. Then there’s a nice little centerboard 18-ft Marshall catboat in our Classy Classifieds. But that doesn’t sound quite right either. What do you think? (Please post your suggestions in the Comments section below.)

It’s been a while since we’ve heard from The Resourceful Sailor. Since he lowered the mast on his boat Sampaguita last June, he’s been busy taking care of several boat projects. Now he’s back on deck and has sent us this detailed report on raising the mast.

What goes down must go up? After a rig refit, the mast of Sampaguita, a Pacific Seacraft Flicka 20, was ready to be raised. Still in her Port Townsend slip, the process was, generally, the opposite of lowering, presented in ‘Lectronic Latitude on June 16, 2021 — Lowering the Mast on a Small Sailboat with The Resourceful Sailor.

It required the same bridle setup. The boom, again, would act as a gin pole to gain the proper angle for leverage. The mainsheet block and tackle would do the heavy lifting. Rather than write the same thing again, I will focus on the differences between the two procedures and provide some previously left-out insights. In doing this, I will presume that you have read or will review the installment mentioned above.

For raising, only the cap shrouds and the headstay needed to be attached to their respective chainplates. Out of respect for Murphy’s Law, the other wires were secured tightly to the mast to mitigate their inclination to get snagged. Snagged wires like to kink, and whether new or old, it is unsatisfying, not to mention detrimental to their longevity and strength. The turnbuckles were wrapped in rags and secured to the mast, preventing them from scratching and banging into anything (everything.)

The bridle setup was more challenging to organize with the rig down than up. Since I had new wires, I needed to re-seize the stainless steel rings to the cap shrouds. It required holding up the wire to determine the proper pivot points with the mast. Then the opposing force lines to the lower stay chainplates were added, conceptualizing the rigid triangle necessary to maintain the pivot points. With the rig up, it is easier to build and see this. But down, it is a floppy mess. Then, a line was attached to each ring, ready to lead to a bail on the boom. A block and tackle served nicely for this on one side for ease of adjustment. These guylines will provide the opposing forces to keep the boom centered.

After that, I moved the mast to the tabernacle and pinned its base in the ready position. A final review of the halyard and wire leads and spreader orientations was done. A reminder: Always be on the lookout for snagging wires and lines whenever you move the mast.

The boom, as a gin pole, could then be added. When lowering, it was already in position and there was only the matter of attaching the bridle lines. However, with the mast down, the boom would be attached starting in a vertical position, which involved some boat yoga. I shackled the mainsheet and topping lift to its outer end. Lots of slack was fed into those lines, allowing for lifting it straight up. While holding it so, I pinned the mast end to the gooseneck. I picked up the previously-led guylines (the line and the block and tackle) and attached them to the boom bail. I tightened and adjusted the mainsheet, the topping lift, and the guylines until the boom was centered and vertical. The opposing forces held the gin pole in place.

With the correct bridle setup, the mast base in the tabernacle, and the gin pole in place, it was simply a matter of hoisting the mast. On a Flicka 20, the round bar traveler and the four-part mainsheet block and tackle are very accommodating to providing the mechanical advantage necessary for raising and lowering the mast. To a soloist, this advantage was indispensable. It took two hands and a bit of leaning to get it moving, but it became easier as it went higher. An eye was kept on the centerline alignment of the mast and boom, making sure the bridle prep was accurate, and watching that the wires did not snag.

The accompanying video shows the raising from a first-person view and solo. In contrast to lowering the mast, gravity is less of a friend, so the ascent is slower, with a bit more heave-ho. There is no shame in re-lowering the mast to adjust the bridle lines or sort out the wires. It is better to correct them early than to think something will be all right when it is not. Raising and lowering the mast is not rocket science, but 99% of the gig is proper preparation. If something goes wrong, it could be catastrophic, so double- and triple-check. It can be intimidating at first, but it is simple physics and simple tools at work. Remember, keep it safe and prudent, and have a blast.

The Lighted Boat Parades continue! This weekend, actually tonight, the St. Francis YC’s Decorated Boat Parade in San Francisco will travel between Crissy Field and the Marina Green. Will you participate in or watch the parade?

To get you fired up, here are some photos from last weekend’s Lighted Yacht Parade in Alameda, which was organized by the Alameda and Oakland yacht clubs. Forty-five yachts decked their rigs with lights, costumes and giant Santas.

First place in the Sailboat category was Carson Hobart from Oakland aboard Joint Venture.

Second place was awarded to Kwame Copeland from Alameda aboard Espresso (pictured below).

Following are a few more of our favorite photos from the parade.

We hope you enjoy tonight’s parade and any other Christmas lights you happen to visit. Pier 39 in San Francisco is featuring a tree-lighting ceremony every half hour between 5 p.m. and 10 p.m. The Pier’s 60-foot-tall white fir tree will be lit up to the accompaniment of synchronized holiday music. 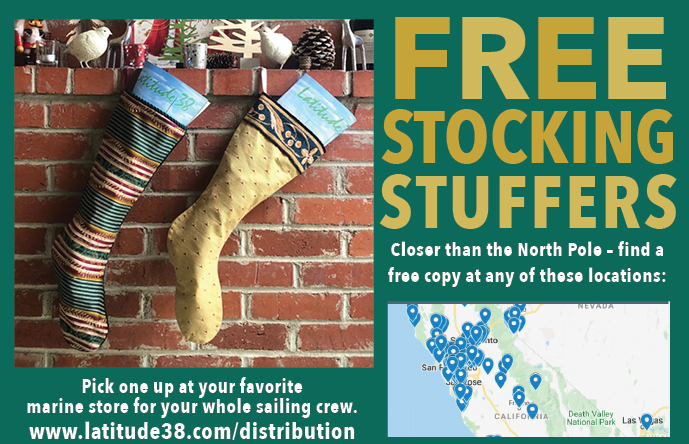 Or do both. Stuff the stockings, and gift your friends and loved ones a 12-month subscription.  Go on . . .  You know you want to!

SHARE ON Tweet Share Email Linkedln
Receive emails when 'Lectronic Latitude is updated. SUBSCRIBE
'Lectronic Latitude: Wednesday, Dec 15
Coast Guard
USCG Rescues Two Sailors Near Daly City
Two people were rescued on Sunday night when their sailboat became disabled off the coast of Daly City.
Sailing for Your Ears
Get Your Good Jibes Going with Roy Disney
In this week's episode of Good Jibes, Ross Tibbits chats with Roy Disney who has been sailing since he was walking.
Sponsored Post
Club Nautique Is Hiring Sales and Office Staff
Club Nautique is seeking a full-time sales person in Alameda and a part-time front desk associate in Sausalito.
BACK TO ISLAND HOPPING
Is This Your Year to Join the Pacific Puddle Jump?
If your boat is fitted out with the essentials for safety and comfort offshore, and you’re eager for a grand adventure, consider joining the 2022 Pacific Puddle Jump.
Australia Event Is This Week
Third Woman Joins US SailGP Team
The US SailGP Team announced that 23-year-old Anna Weis will trial with the team at this week's Australia SailGP in Sydney.
SHOP LOCALLY
Free Latitude 38 Christmas Stocking Stuffers
Here's a quick and easy way to make a sailor smile and to check an item off your Christmas list.
More 'Lectronics »
Report Listing