The Baja Ha-Ha Grand Poobah has put out a reminder that today is your last chance to sign up for the 27th Ha-Ha rally to Mexico!

In years past the Poobah would allow late entries, but with so many entries already, it would take a really big ‘bite’ to get in after September 1. (By the way, while there are many signups this year, it’s still well short of the 200+ entries the Ha-Ha has had several times before.)

Who else has signed up for this year’s Ha-Ha?

Well, there’s Carolyn, rockin’ the black-banded cowboy hat in the photo, and Richard of the Lagoon 400 S2 Aria’s Song from Porter Ranch. The only animal trainer in the fleet, Carolyn will no doubt be deputized by Doña ‘Head of Security’ de Mallorca if first mates get out of line on shore leave at Turtle Bay and Bahia Santa Maria.

Among the Ensenada starters will be Nashun and Jennifer, with their lovely 10-year-old daughter Amari, and their chihuahua mix Nacho aboard the Oceanis 41 Sirena. The couple started sailing six years ago with a Ranger 26 and a copy of Sailing for Dummies.

The Poobah got a kick at the incongruity of photos sent by Troy and Birdie of the Bellingham-based 62-ft custom ketch Typhoon. Birdie looks as though she lives up to her happy and gregarious- sounding name, while Troy’s black and white photo and expression suggest he’s the more serious of the twosome. On the other hand, they both love whipped cream, so maybe his photo is deceiving.

Among the most hirsute and stylish participants in the Ha-Ha will be Timan Eatherton of the Allied Princess 36 Hosea. Timan and his wife Ari, a mystic whose favorite dessert is “anything I haven’t tried yet,” will also have a chihuahua as crew.

From the canine world we have Buck of Morgan le Fay. The Poobah has yet to see another human or animal looking so enthusiastic about doing the Ha-Ha.

And let’s not forget Kurtis and Kay Nelson of the Alameda-/Ceres-based Hunter Passage 42 Oasis, which they bought in March last year after owning a long list of ski boats. Kurtis is a vet of two Transpacs in his youth. Kay has committed to at least one year of cruising.

All these folks are in for Ha-Ha XXVII. As mentioned before, you’d better sign up right now if you also want to be in.

If you’ve yet to sign up, here’s the link you need: https://www.baja-haha.com.

A big thank-you to all the Baja Ha-Ha sponsors and supporters.

Paul owns Adjudicator, a Carkeek-designed Fast 40 from the British fleet, and shares his tips on how to buy and insure your racing boat, maintain your boat, and find the type of racing that’s best for you, and how to have the best time with your family on the water. Plus, you’ll hear about Paul’s racing program.

Read more about Adjudicator at https://www.latitude38.com/issues/august-2020/#84.

Listen to this and previous episodes on Apple Podcasts, Spotify, Google Podcasts, and your other favorite podcast spots. Follow us and leave a five-star review if you’re feeling the Good Jibes!

September has arrived, and along with it the newest issue of Latitude 38 magazine. This month we bring you feature stories on the Transpac, Baja Ha-Ha sailors, the Fastnet, and an unmanned circumnavigation. Plus stacks more West Coast stories and news. Here are some previews:

Bay Area Sailors in the Fastnet

Bay Area sailors Harmon Shragge, Mike Crandall and Dustin Wanco competed in this year’s Rolex Fastnet Race aboard the VO65 Sisi, owned by the Austrian Ocean Race Project. The boat was christened after the extremely popular Austrian Queen Elizabeth, who went by the nickname ‘Sisi’ and reigned in the late 1800s. Sisi (the boat) was the former Vestas in the Volvo Ocean Race 2017-18. This is not the hull that ran aground in the Indian Ocean; it’s the one that collided with a fishing boat outside Hong Kong.

Readers may remember that Mike and I (Harmon) were in the process of sailing from Subic Bay to Seattle with the Clipper Round the World Race in March 2020 when we were quarantined and the race was aborted. The Fastnet is the biggest offshore race in the world (this year marked the 49th biennial edition), and it was not about to be canceled due to COVID. Pre-Delta variant craziness, 450 boats were registered. By the time France and England stopped Cowes, UK, and finished in Cherbourg, France, starters were whittled down to just under 350. Due to heavy weather during the first 24 hours of the race, fewer than 180 boats completed the extended 695-mile course.

Sailing coaches are tasked with teaching our kids how to sail and — we hope — encouraging them to want to sail as a lifelong pastime. We chatted with three local (and highly regarded) coaches about how they coach and what the challenges are, specifically on the Bay.

Jack Barton grew up in Marin County as a successful youth sailor racing out of San Francisco Yacht Club. He started coaching as a teen, giving private sailing lessons and coaching at Tiburon YC. Barton, 25, is now a full-time sailing instructor at SFYC.

With an older brother she really wanted to beat on the water, Eliza Richartz was highly motivated as a junior sailor and went on to kick ass racing 420s nationally as a teenager. From Old Lyme, CT, Richartz sailed for Stanford University and is now studying veterinary science at UC Davis. She coaches part time for SFYC.

Growing up sailing in Hawaii at Kaneohe YC launched Adam Corpuz-Lahne’s coaching career, starting with summer programs at KYC when he was 16. After college he was head coach/sailing director at Del Rey YC for three years, then managed a sailing program at the Marine Corps base in Kaneohe. He became a full-time coach at St. Francis YC in 2011 and is now the club’s senior sailing director.

Richmond resident Genny Tulloch’s name became particularly well known in the sailing community and beyond when she was selected to crew aboard Roy Disney’s well-publicized TP52 Morning Light some 15 years ago. Yet the Disney movie is but a small slice of her impressive sailing career. Both before and since her silver-screen debut, she’s accomplished quite a few of the sport’s bucket-list items. Furthermore, she’s managed to transmute a professional sailing career into other arenas associated with both sailing and the Olympics.

Ask Genny about what events stand out in her career and you might want to sit down and take notes. “I think if you were to say what defines me or makes me slightly different than other sailors, in some capacities, it might be the range or the breadth of my experience,” she says. When pressed, Genny acknowledges that winning ICSA’s Women’s College Sailor of the Year in 2004 stands at the top of her list. She was a sophomore at Harvard University, and attributes her win to her amazing teammates. The winning margin was slim, something like .07% over Anna Tunnicliffe.

And of course, the September issue includes all your favorites sections:

Pick up your copy at your nearest or favorite distributor. Or, if you haven’t already, subscribe for home delivery.

The Kite Foil League asks, “You wanted to see Markus Edegran in a Banana suit rolling up his yellow kite? We have that. Pirate wearing tear-away pants with a patriotic surprise? Check. Crashes, big air, 35 knots — check, check, check.”

“The event ended in a who-beat-whom battle between Markus Edegran and Evan Heffernan for the 42-race Triple Crown Series. Find out who won, and get your fix in less than four minutes.”

The Leadbetter Classic took place in Santa Barbara on August 20-22. Enjoy the visuals in the highlight reel, then head on over to the September issue of Latitude 38 to learn more about 23-year-old Santa Barbara kiter Evan Heffernan, an Olympic hopeful. 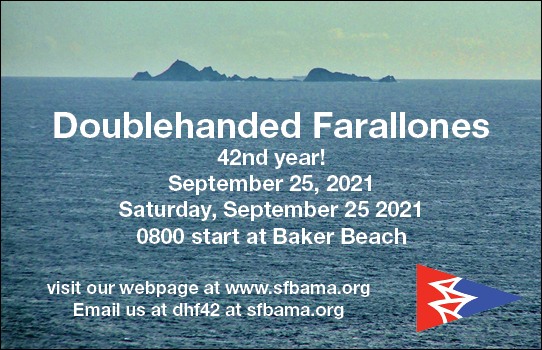 The perfect sailor’s job: 29 days off every month! This is a one-day-per-month position to deliver Latitude 38 magazines to our Bay Area distributors on the first of each month. Drivers act as ambassadors for the West Coast’s premier sailing and marine magazine. Applicants should feel comfortable engaging with our wonderful distribution team and maintaining relationships with sailing and marine businesses in the Bay Area. An ideal candidate will keep track of the magazines delivered to each location and look out for new distribution locations.

To apply, send your résumé and cover letter with sailing experience by email to [email protected] with “Latitude Driver” in the subject line. Please, no phone calls!

SHARE ON Tweet Share Email Linkedln
Receive emails when 'Lectronic Latitude is updated. SUBSCRIBE
'Lectronic Latitude: Monday, Aug 30
Weathering the Storms Down South
Hurricane Nora Makes Landfall in Mexico
We've seen many reports of flooding, and damage to structures, and yes, unfortunately some boats.
Letters
Corresponding Through Satellites and Milky Seas
"Milky Seas," a rare phenomenon where the entire ocean appears to glow ...
Sponsored Post
KKMI Bottom Jobs: What Sets Us Apart
When you're shopping around, make sure you're not comparing apples to oranges.
Keeping an Eye on Sailing's Future
Bill Erkelens on Sustainability Practices
During lockdown last year, rather than cutting back, 11th Hour Racing supported the team to double down on its sustainability efforts. The result was a turnkey how-to-create-sustainability program, known as the Toolbox ...
Yacht Racing Preview
Regattas to Look Forward to in September
The 26-mile Jazz Cup to Benicia is on for Saturday, September 4. South Beach YC will run the start near Treasure Island, and Benicia YC the finish.
Sponsored Post
Skippers Wanted: US Coast Guard-Licensed Captains for Charters and Private Lessons
Wanted: US Coast Guard-licensed captains for charters and private lessons. For power & sail. Hourly rate from $50 up. Weekend and weekday work available.
More 'Lectronics »
Report Listing