A 23-year-old woman was rescued from a sailboat west of Bodega Bay at around 2:15 a.m. Tuesday, after she had accidentally swallowed antifreeze the previous afternoon.

US Coast Guard and San Francisco Fire Department personnel worked together in what USCG’s 11th District search mission coordinator, Douglas Samp, described as “… a highly complex medical evacuation performed at night, off a small sailboat, hundreds of miles offshore that tested the limits of our crews and equipment.”

The rescue operation played out as per the following Coast Guard report:

“A Coast Guard Air Station Sacramento C-27 Spartan aircrew launched around 9:55 p.m. Monday to provide cover for the Jayhawk crew throughout the mission and rendezvoused with the Jayhawk before both crews headed offshore.

“The Jayhawk crew landed on the Midgett to refuel approximately 230 miles west of San Francisco around 11:45 p.m. and then proceeded toward the Cibola.

“The Jayhawk crew arrived on scene with the Cibola around 2:15 a.m. Tuesday and lowered the rescue swimmer to assess the situation.

The following video was provided courtesy of US Coast Guard District 11.

According to the San Francisco Chronicle, the unnamed woman and her father were approximately 380 miles off Bodega Bay, several days into a voyage from Astoria, Oregon, to Hawaii, when the rescue took place.

Activities packed the final official event in Delta Doo Dah Lucky 13, hosted by Delta Bay Marina on the Delta Loop in Isleton. Just off the San Joaquin River but protected from open waters by tule islands, Delta Bay has now welcomed the Delta Doo Dah cruising rally for the third year in a row. And so much to do and see! Where to begin?

With the temperature forecast to kiss 100, it made sense to come early. At 10 a.m., Newport Vessels got a head start on the afternoon’s itinerary with demos of their inflatable dinghies and electric outboards.

Next up, the volunteers from Peninsula Yacht Club got the grill going and served 68 lunches throughout the afternoon. Demi Stewart’s photography exhibit in the store at Delta Bay Marina opened. On the other side of the levee in Park Delta Bay, Bill Wells, executive director of the Delta Chambers, gave a talk about the history of boating in the Delta.

Other activities that afternoon included free fishing for kids and free ‘test sails’ on Delta Bay’s fleet of clever electric boats. (More on that on Friday.) Fleet members Pat and Carole McIntosh came by RV and volunteered at a welcome table at the top of the ramp to the marina.

Our favorite part of these events is chatting with fleet members, finding out where they’ve been and where they’re going, and listening to their sea stories. Karen and Gary Preston told us that they trailered the Hunter 270 Charmed Life down from Folsom Lake. The lake doesn’t have enough water for sailing. The marina docks never even went in this year. So they came to Delta Bay Marina on the Fourth of July and took a month-to-month slip. They’ll probably stay until March — or until there’s enough water to sail in Folsom Lake. They went for a cruise this week, starting at the west end of the Delta, in Antioch, with a visit to the new restaurant where Humphrey’s used to be, Smith’s Landing, at the Antioch Marina.

After that they anchored out in Potato Slough, then came back to Delta Bay before heading upriver to Stockton Sailing Club on Wednesday, visiting friends from Lina, a Catalina 25, there. Charmed Life was the only boat anchored at Mandeville Tip on Thursday night. Karen and Gary had a great view of the Perseids from there, but only saw two meteors. They had 20 knots coming back on Friday.

Richard and Carolyn Mason followed with Lina on Friday. They encountered the same strong breeze and whitecaps on the San Joaquin. East of Mandeville, they were trying to reef the main and caught a gust in 25 knots of wind. Richard said the slugs blew out of the mast like a zipper unzipping.

Registration will remain open for the Delta Doo Dah until the end of August. Learn more at www.deltadoodah.com. 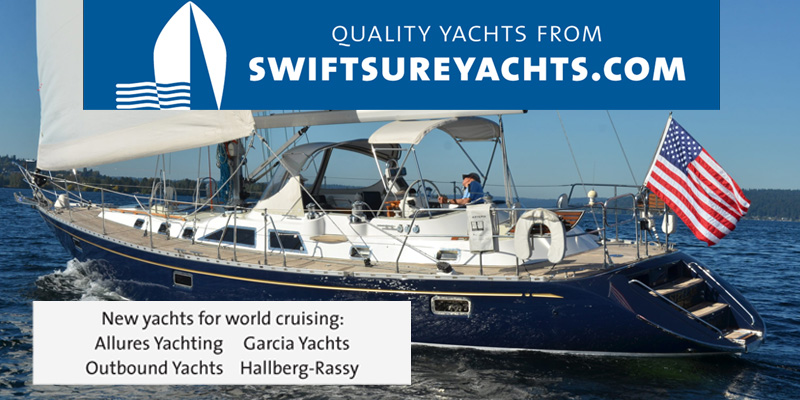 Swiftsure serves the West Coast from Seattle and four other waterfronts.

Last weekend’s West Marine US Open Sailing Series on San Francisco Bay provided what most racers come here for — powerful conditions and exceptional competition. It was the sixth and final event in a series of regattas established to help raise the performance of US sailors competing on the world stage.

After disappointing Olympic sailing events, Paul Cayard, executive director of the US Sailing Team, and rising US talent were in San Francisco to remind us that we nonetheless sent a competitive team to Tokyo, and there is more talent being cultivated every day across the country. To build a truly national team that attracts competitors from across the country, US Sailing debuted the West Marine US Open Sailing Series at the beginning of the year. Three events were held in Florida — in Fort Lauderdale, Miami and Clearwater — throughout January and February. The series finished up in California with events in San Diego, Long Beach and San Francisco.

The iQFoil and Formula Kite sailors are vying for an Olympic berth in 2024 in France. With only three years instead of four in the next ‘quad’, they’re hard at it polishing their performance and technique.

In the Open Formula Kite, Kai Calder from Alameda claimed first-place honors. Calder was even on points with local legend Johnny Heineken from Larkspur and Markus Edegran of Rio Vista after Friday’s racing. Calder overtook first-place on Saturday, and then defeated Edegran by 5 points. Johnny Heineken took third.

The International 420 fleet and ILCA fleets sailed on a blustery, bouncy Berkeley Circle. It looked like a ton of fun if you were fit and young enough to enjoy the flogging.

Jack Murphy of Hillsborough and Sawyer Bastian from San Jose fought through the rollicking conditions to take first place in the I420. The ILCA fleet standings have not been posted, but they raced hard in bracing conditions.

As summer ends and students head back to school, many Olympic hopefuls in this past weekend’s event will take what they learned on San Francisco Bay and in the full series and apply it to their college racing and their Olympic ambitions. Paul Cayard and US Sailing are building a series that looks to improve the performance of the US Sailing team in France in 2024 and make another giant leap forward by the time Olympic sailing returns to Long Beach in 2028. For more results and a wrap-up, visit US Sailing here.

Guess what? There are only three weeks left until we get to see you all at the Latitude 38 Fall Crew List Party! This is one of our favorite events of the year. Why? Because it’s just so much fun! It’s about sailing – check; It’s frequented by sailors – check; You bump into people you know – check; You make new friends – check; You learn new things – check; You get to chat with some of our advertisers and the people who know all about sailing in Mexico – check. There are just so many good things happening at these parties that it would be a shame to miss out.

So to remind you, here are the details:

How to get tickets: Go to our Party page on Eventbrite. When you land there, hit the big green button that says ‘Tickets.’ You will then be directed to a page on which you can choose a ‘General Admission’ ticket – $10.00, or a ‘Baja Ha-Ha Skipper & First Mate ONLY’ ticket – $0.00. Whichever ticket you choose, you will have to go through the motions of ‘purchasing’ even if you’re getting the ‘Free’ ticket. Easy!

In the meantime, here are some photos of Crew Parties past. But unlike the experience of Ebenezer Scrooge, these photos of the past will have you reminiscing with glee. Either that or you’ll be kicking yourself for not having been to a Latitude 38 Crew List Party sooner.

Will we see you there?

SHARE ON Tweet Share Email Linkedln
Leave a comment
Receive emails when 'Lectronic Latitude is updated. SUBSCRIBE
'Lectronic Latitude: Monday, Aug 16
SC27s Learn Lessons in the Delta
Baptism by Ditch: Cardinal Rule #1
As the channel narrowed and the wind picked up, I was driving, and we had our first broach, which turned into our second broach, and then our third.
Young Crew Sign Up to Head South
Kids Rule for Baja Ha-Ha XXVII Rally to Mexico
With so many kids expected to do the Ha-Ha this year, we may have to reinstate the Ha-Ha Kids' Diving off the Back Beam of 'Profligate' Olympics.
Sponsored Post
Don’t Miss Owl Harbor’s Annual Nautical Swapmeet
Remember to book your space for the Owl Harbor Nautical Swap Meet coming in August.
Another New Sailing Experience
Florida Follies Aboard a Sloop Named ‘Tolvfingertarmen’
When a Florida friend needed help sea-trialing his boat, Sally Lightfoot experienced a waypoint on "yet another of sailing’s learning curves."
Snap Happy Sailors
Bay Area Sailors Are the Best: Here’s the Proof
Keep the good times sailing!
More 'Lectronics »
Report Listing