Last Monday, local sailor Jay Grant took advantage of the perfect weather, and the perfect boat, to enjoy what became a perfect birthday celebration. Along with friends Thanie Pesavento and Andrew Biernier, Jay took a few hours off and sailed Spaulding Marine Center’s historic vessel Freda from Sausalito to Angel Island and back.

The 32-ft gaff sloop was built in Belvedere in 1885 to take part in the local racing scene, and in 2014 was relaunched after undergoing an extensive refit at Spaulding Marine Center in Sausalito.

It was the first time aboard the historic vessel for all her crew, and Thanie said Freda is the oldest boat she’s sailed on. “She’s very, very beautiful. She looks like she’s out of Home Magazine.”

Despite the crew being rigged up in jackets, Thanie said it was “kind of warm for a winter day. She’s a smaller boat, so we got some spray. That was really nice; I definitely miss that.” Thanie spent 2019 and the first half of 2020 crewing aboard Call of the Sea’s schooner Seaward.

How will you celebrate your next birthday?

It was a sleepless night for many Sausalito boat owners Monday night into Tuesday morning, and probably for none more than the staff and tenants at Schoonmaker Point Marina.

A predicted windstorm arrived, and as usual, it took many boats by surprise and unprepared. Boats large and small were tossed around, and especially those out in the Sausalito anchorage. And as happens every time there is a storm, especially a Norther, at least a half dozen or more of those boats drag anchor and eventually founder. Some meet their end against a concrete dock, some on rocks or the beach, and some take on water and just sink below the waves as they drift helplessly toward the shore.

During southerly storms, which are equally frequent in winter, many of these boats drag onto the shore in Tiburon. Little damage is done to property on shore other than the need for a cleanup.

Sausalito marinas are often in the direct path of anchored boats that are ill-equipped or unprepared for winter gale winds and waves. When the northerlies blow, as they did in the early hours of Tuesday morning, some of these boats, many of which are unregistered and uninsured, can cause damage to boats berthed in nearby marinas when they break their moorings and drag helplessly toward shore.

The ‘casualty list’ for Schoonmaker Point Marina this time comprised five boats in total — three sailboats and two powerboats that dragged into the marina. The latest ‘victims’ included a 40-ft wooden cabin cruiser named Salty that dragged down onto Schoomaker’s A dock and sank. Reportedly the female owner managed to get herself off, but not her dog, which was lost, along with apparently everything she owned. The debris from the boat washed up onto Sausalito’s Open Water Rowing float.

Not long after Salty met its end, a Catalina 27 followed, drifting unattended into the same A dock, and toward some of Schoonmaker’s most expensive boats. This dock, sometimes referred to as “Millionaire’s Row,” is where the largest inside berths are located. The unfolding scenario did not look good.

Though the Catalina 27 started heading for several of the marina’s boats, the marina staff and several tenants worked in the dark early hours to secure the boat, and managed to tie it off to Open Water Rowing’s float. According to those on the scene, securing the Catalina was even more difficult due to a jib that had come loose. They therefore had to jump onto the boat and secure the flailing jib before trying to secure the boat. At mid-morning, Parker Diving’s salvage boat arrived to tow the boat out before it did any more damage to the surroundings.

Parker repeated the process for several more boats, including another large sailboat that dragged into the fairway between Schoonmaker docks D and E in the East Harbor (south), sitting precariously between two rows of boats less than 15-20-ft, swinging on an anchor. Parker Diving secured a towline, then cut the anchor chain and towed the boat out. This boat apparently was a repeat offender, and had been previously ticketed and marked for demolition at the Army Corps of Engineers Bay Model.

By midday, there were still two boats stranded — one against the wall between Schoonmaker’s B and C docks, and which also had been ticketed and marked for demolition. The last vessel was a sailboat that dragged into Schoonmaker’s lagoon and sat like a beached whale. As the wind gradually died down, Parker Diving and marina staff were planning the removal of these last two boats.

Luckily no one was physically hurt, and no one lost their life, though a few lost (or will lose) what represents their only property. While we have some sympathy for those who lost their boats, their belongings, and apparently in one case, their pet, we have seen this scenario play out year after year. And we’d like to say there is a lesson here, and that many should heed it. Boat owners are responsible for their craft. Whether it’s big or small, sail or power, anchored or berthed in a marina,  keep yourself, but also your boat and your neighbor’s boats, safe.

Sausalito wasn’t the only anchorage with problems from the storm. On Monday, we wrote about Brock de Lappe’s ongoing challenges with illegal anchor-outs off the Union Point Marina in Oakland. Yesterday he wrote in, saying, “In last night’s windstorm one of the capsized anchor-out boats broke away and drifted into our Union Point Marina. Now it is our problem. None of these illegal anchor-outs are properly registered or insured so when there is any issue the owner just walks away and it becomes someone else’s problem.” – Latitude 38 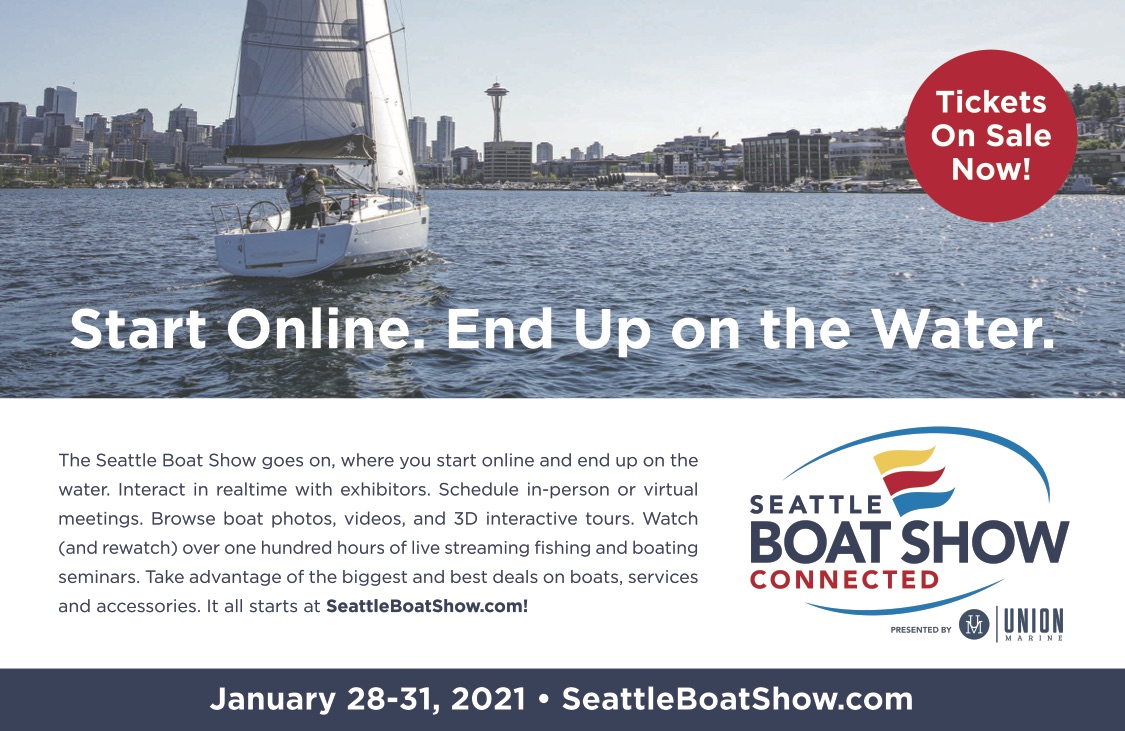 Have you got a box of old photos you’re planning to organize someday? We do too! We also have an archive of Latitude 38 magazines from the pre-digital era that we’ve always wanted to scan and make available. Amazingly, it’s come together before our disorganized boxes of photos. We’ve now added 1990 to 2004 to the digital archives. The image quality isn’t as good because it’s all scanned from the original print, but you can go back to read stories, research past events, and see what was going on in the black-and-white pages of Latitude 38.

The issue featured the Jack Frost Series; a discussion and comment on ‘Manifestly Unsafe Voyage’ inspired by Latitude 38’s interference with the intended voyage of the Signal of Peace; a collection of ‘Season Winners’ that included Dean Treadway winning IMS Ocean series aboard his Farr 36 Sweek Okole; and Bill Biewenga and Rich Wilson, who were about to head out the Gate for Cape Horn on Great American II. A lot was going on.

We’ve got more work to do to get all the way back to 1977, but while much of the sailing world remains becalmed, we thought it a good time to bring back some memories and have something to look forward to when Jack Frost and more racing can resume. You can read the January 1993 issue here or look at all issues from 1990 to 2021 by searching the tabs at the bottom of this page.

Sea chanteys are no longer just for the old salts. The brave new world of doing everything virtually has brought them to Gen Z. According to Thrillist, an email entertainment newsletter you can subscribe to, “Sea shanties are taking over the internet. It’s definitely weird! … Sea shanties are the latest musical craze to emerge from the wells of TikTok,” wrote Esther Zuckerman. “All the kids these days are jamming out to 19th century whaling tunes.”

Back in the pre-COVID world, park ranger Peter Kasin led a chantey sing aboard the historic vessels at Hyde Street Pier in San Francisco on the first Saturday of every month.

The San Francisco Maritime Association has recently hosted some virtual chantey sings, but we don’t learn about them in time to get them in Latitude’s Calendar. You can, however, listen to the most recent one, held on January 16, at https://givebutter.com/chanteysing. Donations go toward technology upgrades to support more virtual events. The faces of participants do show diverse generations.

You can dig into the San Francisco Maritime National Historical Park’s sea chantey archives at www.nps.gov/safr/learn/historyculture/chantey-pathfinder.htm.

The Northwest Seaport in Seattle also hosts monthly chantey sings. The next will be on Friday, February 12, online via Zoom.

(We prefer the ‘chantey’ spelling. Chanter, pronounced shawn-TAY, is French for ‘to sing’, while a shanty is a sort of shack.)

SHARE ON Tweet Share Email
2 Comments
Receive emails when 'Lectronic Latitude is updated. SUBSCRIBE
'Lectronic Latitude: Monday, Jan 18
America's Cupdate
Dramatic Capsize in Stormy Prada Cup
A weekend that began with the highest of hopes for American Magic descended into the depths of despair with a nightmare capsize.
More Illegal Anchor Outs
That Sinking Feeling in the Oakland Estuary
Clearly the Bay Area has a housing crisis, though just as clearly to most people, solving homelessness with illegal anchorages filling up with aging and poorly maintained vessels is not the solution.
Sponsored Post
Dodgers and Biminis of Every Kind from Pacific Crest Canvas
Our employees have over 50 years combined experience in their fields of focus, and strive to create the finest marine canvas available.
Demonstrating Good Sense
Why Monterey Festivities Were Postponed by Surging Waters
One can see why just getting in and out of your slip in the dark, let alone driving around night blinded by your boats decorations, was deemed problematic.
The Resourceful Sailor Series
Old Bronze Portlights: Sealing the Pane
The windowpane seals and gaskets on the opening portlights of Sampaguita, my 1985 Pacific Seacraft Flicka 20, were showing age. At first, it was daunting to consider taking these oval, bronze portlights apart.
More 'Lectronics »