Where did you grow up sailing?

I grew up here in Berkeley, sailing with my family on our Blue Jay dinghy, and later on my father’s O’Day Mariner at the Richmond Yacht Club.

Who taught you to sail?

I learned basics from my father, but did not really learn to sail until my junior year of high school, when I was invited by a couple of family friends to sail with them to New Zealand on the Cal 36 Flight. After a month in the Marquesas we ended up turning back and sailing to Hawaii. Offshore sailing was pretty basic back then. I learned to navigate with a sextant and a Mickey Mouse watch (apparently the captain’s Accutron watch had been lost in Ensenada), which I would set to WWVH* before each sight. There were no GRIB files to download for weather either; we just sailed east through the Pacific High coming home from Hawaii. It took 25 days.

When I got back, my friends and I were out sailing on the Bay pretty much every weekend. In college, I had a Laser I would sail several times a week. I took a break from sailing after college, but took it up again when we bought a Ranger 23 for family sailing on the Bay. In my 40s, I took classes to get my bareboat certificate and started chartering boats regularly out of OCSC.

What kind of sailing do you do now?

I started racing J/24s in 2006 after I sold my Ranger 23. I was very fortunate to be part of a great crew with Don Taylor for several years on his boat On Belay, which culminated in our going to the 2011 J/24 Worlds in Buenos Aires. When we got back I ended up buying On Belay from Don and renamed it Flight, after the Cal 36. I was also very lucky to become part of the crew on Bill Helvestine’s Santa Cruz 50, Deception. I have been bowman there for several years and was part of the 2017 Transpac crew. We ended up second in our division. It was through Bill that I became connected with Wayne Zittel, who invited me to join the 2019 Transpac as a J World sailing coach on the Santa Cruz 52 Westerly.

After Transpac, Wayne asked if I would be interested in being the director of his J World school in Alameda. It was not a hard decision. I had always thought I might teach sailing when I retired; I just did not imagine such a great opportunity would fall into my lap so soon. I put in for retirement soon after returning, got the school set up to operate under COVID-19 restrictions, and have been teaching on our J/80s since June. It’s actually been a good year for the transition, in spite of COVID. Sheltering in place after the Puerto Vallarta Race and MEXORC in March gave me the time to get my USCG 25-Ton Master License and study for my US Sailing Instructor certifications. It’s also been a good year for J World. The plan now is to expand our charter fleet and instruction here, as well as in the schools in San Diego and Puerto Vallarta.

I am passionate about getting more people involved in sailing. In addition to my work at J World, I joined the board of directors of the Richmond Yacht Club this year and helped get their sailing programs running safely with new COVID processes and procedures. I am also looking at ways we can expand our adult keelboat and community sailing programs.

My involvement with the local J/24 fleet, working with Jasper Van Vliet and his wife Robin, has been an avenue for increasing sailing for several years. Five years ago our fleet dropped down to four active boats as longtime fixtures of the fleet moved on, and those still racing were having problems finding skilled crew. We started doing crew-building events like the annual OPBYC (Other People’s Boats Yacht Club) ‘Crew You’ regatta. For the first year, I went out and bought a large inflatable rubber ducky (the mascot of OPBYC) for the upwind mark and two inflatable palm trees for the downwind gates.

The rules are that the owner cannot drive unless the wind is over 18 knots, and we change to jibs at over 12 knots. We run eight short-course races, and the crew gets to trade off all positions. Afterwards, there is a large raft-up and there might be some beer. In addition, last year we ran fleet training events both on shore and on the water. We also have regular fleet picnics and social events. We maintain a connection with the fleet via social media using our own Slack channels, which Brandon Mercer moderates. The fleet now has over 10 active boats and is growing.

I love the variety of the level of teaching I get to do at J World, from seeing beginners master all new skills in basic keelboat and cruising classes, to giving an experienced racer a tip while coaching them racing offshore and seeing the light go on in their eyes.

Why do you sail?

I think it’s really the connection with other crew members you get when sailing well. The level of focus as a team to be able to perform complex maneuvers in perfect harmony. The rest of the world becomes secondary. That perfect jibe, spinnaker peel or mark rounding. It’s also about the places sailing takes me that I would never see otherwise. Beautiful anchorages and diving with family and friends chartering together in Tonga, sailing into the path of a total solar eclipse off the coast of Turkey, driving a 50-foot boat surfing a series of waves in the middle of the Pacific under a full moon.

Can you name three of your favorite sailing books?

Close to the Wind by Peter Goss; A Voyage for Madmen by Peter Nichols; My Old Man and the Sea by David Hays.

*WWVH is the call sign of the US National Institute of Standards and Technology’s shortwave radio time-signal station in Kekaha, on Kauai, Hawaii.

In a letter to its members, Long Beach Yacht Club has announced that it has formally withdrawn from the current America’s Cup event. They acknowledged the tremendous effort put in by the club and look forward to take what they’ve learned from the effort into the future.

The club will be hosting the prestigious Congressional Cup on May 11-16, 2021, as part of the World Match Racing Tour. 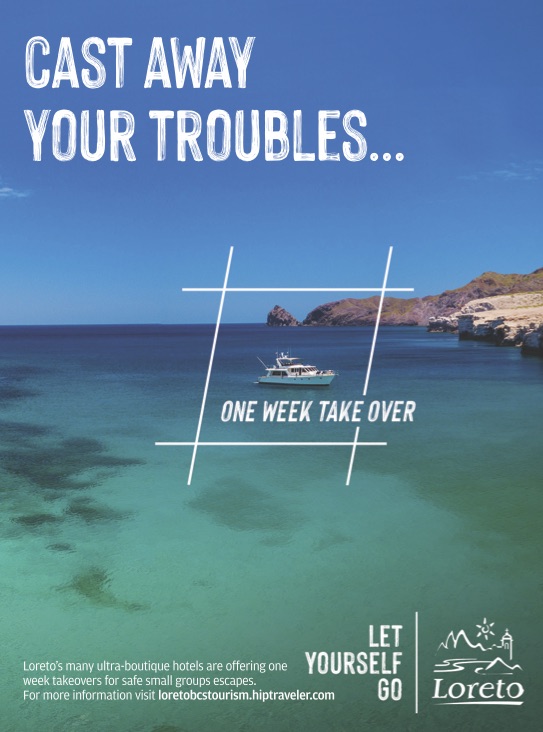 Enjoy a ‘One Week Take Over’ vacation in Loreto, Baja California Sur.

The tidal correction chart shows Los Angeles at zero correction and then, as you progress north, minutes are added along the way. Until you get to San Francisco and then, for some reason, the progression of minutes being added drops about an hour at Pt. Arena, before it resumes having minutes added as you head north. Are we missing something obvious?

Last week, on our magazine distribution day, two of our sales crew, Nicki and Mitch, went on a socially distanced expedition around the East Bay to catch up with and meet some of our Latitude 38 distributors and readers. Here’s who they found ….

So now that you know about lots of places to pick up your copy of Latitude 38, you need never miss out. And of course, you still have the option to subscribe — then you don’t even have to leave home to get the newest issue each month!

SHARE ON Tweet Share Email
1 Comment
Receive emails when 'Lectronic Latitude is updated. SUBSCRIBE
'Lectronic Latitude: Friday, Dec 4
Dive Boat Disaster
Captain of ‘Conception’ Faces Manslaughter Charges
The captain of the 'Conception' — the dive boat that was destroyed by fire in September 2019, killing 33 passengers and one crew member — has been indicted on manslaughter charges for each death.
Sunny Sails in SoCal
Long Beach Marinas Leave Good Impression
We recently bought a 1989 Sabre 38 MkII in Long Beach, and with the arrival of Thanksgiving, we decided to take our pod south for the weekend to get to know the boat and the Long Beach area.
Sponsored Post
Westwind Boat Detailing Offers Washing, Waxing & Varnishing
Washing, waxing, varnishing. Serving the entire Bay Area for more than 30 years. “Everything looks great! It was a huge relief."
Sausalito to Bodega Harbor
A Solo Yacht Delivery on Friday the 13th
I actually collided with two buoys in the dark. Two! How lucky can I get? I mean collided. Bent the pulpit a bit.
The Bay Area Waterfront
Berkeley Marina Sees Slow, Steady Improvements, with More on the Way
Berkeley Marina has seen gradual upgrades, with more projects on the list.
More 'Lectronics »