“Light air, heavy air, clouds, sun and tons of fun.” This is how Nada Ha-Ha organizer Patsy Verhoeven described the 750-mile passage from San Diego to the tip of the Baja Peninsula, which began on November 2. And while some boats joined the fleet in Ensenada, Patsy was pleased to inform us that all are now checked into Mexico and safely anchored or docked in Cabo San Lucas or Puerto Los Cabos.

According to the many exuberant conversations that were had during two “fabulous gatherings,” the crews had experienced an abundance of marine life along the way — marlin, whales, turtles, jumping rays, dolphins — and of course almost everyone dined on fresh-caught fish.

While reflecting on the fun, Patsy added that one of her favorite things about such a fleet is the camaraderie and support network. “Position checks, radio nets, end-of-leg gatherings — cruisers helping cruisers get to Mexico during the pandemic.”

Meanwhile, the Panama Posse, the sailing rally that runs from California to Florida and back to California via the Central American Pacific and Western Caribbean waters, is gearing up for its fourth annual rally. At the time of writing almost 140 sailors had signed up to join the fleet, with more coming!

Organizers Dietmar and Suzanne said their goal is to have 200 participants for this year’s rally. And with upcoming presentations at the Santa Barbara and St Francis Yacht Clubs, the odds are looking pretty good.

Kickoff week is December 4 to 8, with, so far, around 40 vessels joining the Mexico celebrations — in socially distant fashion, of course.

Check out our Heading South page for regular stories and updates about Mexico. And for important and up-to-date information about everything from where to go or who to see, head over to our Mexico First Timers’ Guide for 2020.

Here’s something new: We all know sailors are the most hospitable breed of humans, so why not create a sail-in island getaway? The National Park Service (NPS) is seeking expressions of interest for an ‘Adaptive Reuse of Santa Rosa Island Ranch.’

Located on Santa Rosa Island (surprised?), the facilities sought would “provide a diverse range of lodging, food and beverage, transportation, campground management, and related visitor services at the historic ranch at Bechers Bay.”

While this may sound like a ‘development’ and may evoke visions of tall, shiny buildings and numerous retail outlets, it appears the NPS is more interested in the repurposing of existing buildings and infrastructure, starting with the historic Ranch House, historic Old Schoolhouse, and the Bechers Bay Campground.

So what say you, sailors? Anyone keen for a sailing ranch on Santa Rosa Island?

In case you’ve never sailed to Santa Rosa Island, you can get a sailor’s perspective on this and the other Channel Islands in August’s Latitude 38. 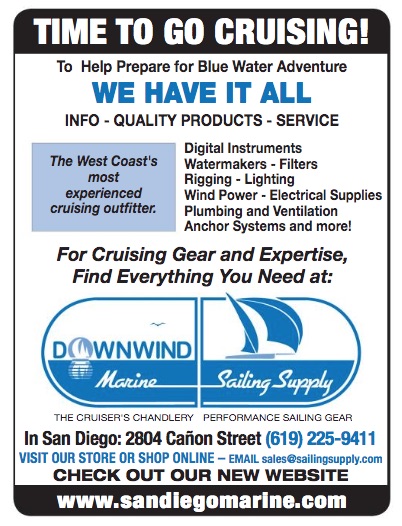 When heading to Mexico stop by Downwind Marine / Sailing Supply near Shelter Island in San Diego. Already in Mexico or on the move south? Shop online at www.sandiegomarine.com.

When David came out for breakfast this morning he was already dressed for his morning run. I noticed his shirt selection right away and asked, “Do you remember where you got that shirt?” He didn’t.

Baltimore Harbor was one of those unforgettable anchorages. We arrived early in the afternoon and had the place nearly to ourselves, so we could pick out the best spot to drop the hook and then be in position to watch everyone else do the same. It is a tradition that provides lots of entertainment. Other cruisers like us arrived in the next couple of hours and settled in without incident. The real fun began when the local weekenders started to arrive after work on Friday.

Those with sailboats, regardless of size, were fairly accomplished at the anchoring process. It’s almost always the stinkpot class that expects power to make up for competence. No less so in a part of the world now overpopulated with bureaucrats and politicians of all types. We watched the little red powerboat motor into the harbor, driven by a nice-looking captain in his mid-40s with a younger blonde woman on the foredeck holding the anchor chain. It looked like maybe 20 feet of chain. It might touch the bottom in a shallow spot.

The captain didn’t bother circling to check for swing room between other boats, he just yelled to the blonde to drop the hook. She pushed it overboard, still holding the end of the chain with one hand. Her technique might have had a chance of working if the chain had been longer or her grip tighter, but once the chain ran out and the anchor was still headed to the bottom, the end of the chain slipped through her fingers and followed the rest of it to the bottom. By then the sun was starting to set. Perhaps they had another anchor and chain. We have three, for example, designed for different bottoms and holding types.

Not the case for the little red powerboat. It was evident they didn’t have an option, and our catching a word now and then, Captain was thinking their only choice was returning to their home marina. That was sure to spoil their weekend.

This was not our first potential rescue of a powerboat, but actually number three. The first one ran out of gas on San Francisco Bay, and we towed them to their marina. The second lost their anchor while waiting for a bridge to open on the Intracoastal Waterway. So, we hailed the captain to come along side.

Confirming that they were overnighting for the weekend, we offered to raft them to our boat. David made it plain that he would direct the process and thus avoid damage to either boat. Baltimore Harbor is relatively calm, but an occasional big boat wake can cause damage if the boats are not properly secured. Any captain who didn’t have his chain secured before dropping the anchor was not to be trusted to tie up boats.

Despite our having rescued them, the captain was a bit grumpy and begrudgingly thanked us. He wasn’t used to being given orders, even when he clearly was not the one to be in charge. By that time it was full dark, and we were ready to settle down for the evening.

Next morning, while we were having breakfast in the cockpit, our rafting mates reappeared. They asked if we were OK with their heading off to shore for the morning, which we were. It would be mid-afternoon before they reappeared. Meanwhile, we had a relaxing day watching the harbor traffic and doing boat projects typical of a cruising boat in port.

They returned bearing gifts. “We wanted to thank you for the rescue last night after we lost our anchor, and to apologize for being out of sorts. I’ve just spent the week testifying before Congress, and besides being exhausted was a bit stressed.” We offered coffee and cake, and once we were all comfortable in the cockpit, we opened our gifts. Mine was a big red crab carved out of wood and made to hang on my Christmas tree, which it has every year since. David received a T-shirt, also with a big red crab, and the statement “Maryland Is for Crabs.” We all laughed at the joke and the appropriateness of the thank-you gifts.

Now an incredible number of years later, it is one of David’s favorite shirts for running.

With only 12 issues of Latitude 38 a year, and thousands of boats racing, cruising and daysailing between the Delta, San Francisco Bay, Mexico and the South Pacific in any given year, the odds seem small that your boat will end up on the cover. But if you sail a lot, like Dominic Marchal of Marchal Sailmakers does with his Columbia 5.5 Sonic Death Monkey (ex-Alert), the odds go up. Fred Fago was out shooting photos for the Estuary Extravaganza organized by Encinal, Oakland and Island Yacht Clubs and captured an ideal, colorful, October day. He sent a shot to us, and — presto! — it was the perfect cover.

Will Benedict wrote to say that he and his 14-year-old son Alex had a blast sailing with Dominic that day. Dominic was all smiles, since they ended up scoring 1, 1, 2. The cover shot was a bonus. Will and Alex had so much fun sailing with Dominic that they thought they’d surprise him with a 30″ x 40″ poster of the cover, inscribed with the tribute: “To the greatest helmsman on the planet and an okay sailmaker with cool dogs — the Benedicts.”

Dominic is one of the main ringleaders of the active Columbia 5.5 fleet, which enjoys the warm, flat-water racing of the Oakland Estuary. We published a Boat of the Month story on the Columbia 5.5 fleet back in our February 2003 issue. We hope to update it soon.

Alex is following in the deck shoes of his dad Will, who grew up sailing with his dad, Pat Benedict, aboard the J/29 Advantage II, before moving up to the J/105 Advantage III. The family still gets out together on Advantage III. Will and Alex share their racing talents with others as well.

Got a cover shot hiding in your terabytes? Send it to editorial@latitude38.com. 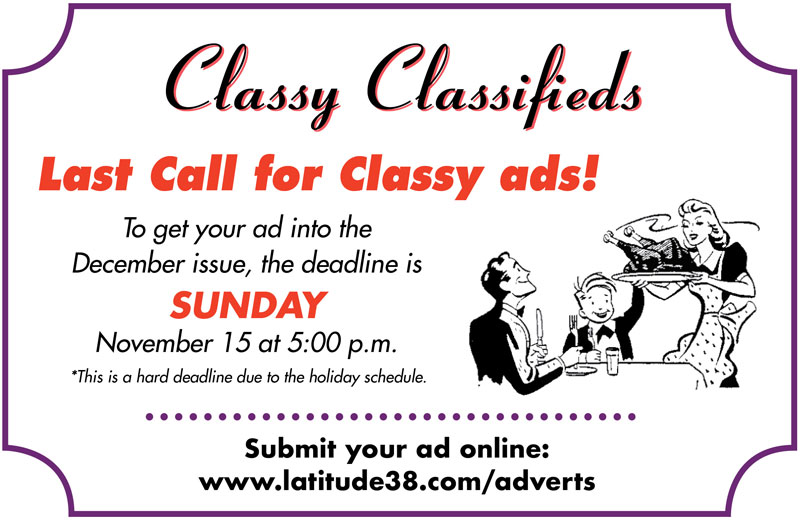 To get your ad into the December issue, the deadline is SUNDAY, November 15 at 5:00 p.m.

SHARE ON Tweet Share Email
Leave a comment
Receive emails when 'Lectronic Latitude is updated. SUBSCRIBE
'Lectronic Latitude: Wednesday, Nov 11
teaching women to sail
Getting Women on the Water with Lauren Eisele
I teach sailing because it is so rewarding to witness my students transition from being fearful to confident.
Sailing South
Baja Ha-Ha’s Poobah Celebrates Cruising to Mexico
When I first visited in the 1970s, we gave the Mexican ranch hands a case of beer. They reciprocated by inviting us to dinner . . .
Sponsored Post
Twin Rivers Marine Insurance Opens New Location
Gary Clausen of Twin Rivers Marine Insurance has been serving the needs of his clients in all of California for many years.
Nonstop Solo Round-the-World Race
Vendée Globe Competitors Suffer Damage Already
The 2020-21 Vendée Globe started on Sunday afternoon off Les Sables-d'Olonne in western France. In most years, the start of the race is impressive, with hundreds of thousands of spectators…
Racing Without Water
The Film about ‘Iron Duck’ Setting the World Sailing Speed Record
"It almost ended before it started, with the crash of their first-speed yacht record attempt, the disaster that broke the short-lived Wood Duck."
More 'Lectronics »
Report Listing