On Friday we posted the photo below of a somewhat ‘off the radar’ Bay Area marina, under the heading ‘Guess Where.’  It didn’t take long for sharp-eyed Latitude 38 readers to correctly identify the spot. Ron Witzel, of the Tripp Javelin 38 Harpoen, was the first to point out it is Point San Pablo Yacht Harbor, hidden around the bend from Point Molate on Richmond’s western shore.

The yacht harbor changed hands a few years ago and is now being spruced up, and it has a new restaurant on the premises, Black Star Pirate Barbecue. According to harbormaster Daryl Henline, the harbor and channel are shallow and in need of a dredge, so they’re not really ready for visiting by boat. However, it remains an interesting waterfront destination to discover by car, and is the departure point for guests at the East Brother Light Station (currently closed due to COVID-19).

The historic point was home to Winehaven, the world’s largest winery from 1907 to 1919, before it was shut down by Prohibition. At the time, the winery was shipping about 500,000 gallons of wine a month! The point was also the home of the very last active whaling station in the US, which wasn’t closed until the 1970s.

To get there by road you have to be heading west on 580 toward Marin and take the very last exit, Point Molate/Western Drive, just before the Richmond Bridge toll plaza. Over the years thousands of sailors have sailed by this point and hugged its shallow shore when hiding from the current during the annual Great Vallejo Race.

San Diego produced pea-soup fog for today’s start to the Nada Ha-Ha (the socially distanced alternative to the canceled 2020 Baja Ha-Ha). There’s also a 6-knot wind. So instead of a start line, Nada Ha-Ha ringleader Patsy Verhoeven says they decided to do “a rolling start and head out away from traffic.”

Eleven boats checked in at this morning’s roll call in San Diego, with a further 15 boats starting from Ensenada, and another 13 are either starting late (in the next two days) or may have missed the roll call. “I estimate a fleet of almost 40 boats.”

This Ha-Ha lite will be a cruise-in-company event without the social, shoreside activities normally associated with the annual migration south. The November issue of Latitude included profiles of some of the fleet members who will be starting their voyage south, with the first stop coming up in Turtle Bay. We weren’t able to include all fleet members in our November story, but we’ll add information about some of the other sailors who are heading south in this and upcoming issues of ‘Lectronic Latitude.

One of these sailors is Don Gehringer from Yuma, AZ, aboard his fast 55′ catamaran, Mañana. Don reports he has only sailed north on the Pacific Coast — when he was bringing his boat from Panama — so this will be his first time heading south on the Pacific Coast. And he says, despite her size, Mañana is pretty easy for two people to handle. Don has been sailing for ten years and Mañana is the only boat he’s owned. He was planning on sailing to the South Pacific this past spring, but due to the pandemic was rerouted and quarantined in Honolulu.

Don’s longest prior passage was the return to the mainland. Now he’s ready to return to warmer water and the Sea of Cortez. Hopefully, if all goes well, he’ll get another chance to sail to the South Pacific in spring 2021, but if that doesn’t happen, he’ll probably return to the US. We asked Don about his sailing heroes and he named Richard Henry Dana, author of Two Years Before the Mast.

Looking at the Nada Ha-Ha entry list, about 55 of the 72 boats signed up are scheduled to leave tomorrow from San Diego, and some from Ensenada. We heard from Katie Smith aboard the Seawind 1160 Flite Deck, who said they’re one of the boats already checked into Ensenada, Mexico, and will be joining the Nada Ha-Ha fleet as they pass by.

After doing 13 prior Baja Ha-Ha’s, Patsy Verhoeven is set to take her 14th Ha-Ha sail south. It was just in the August issue that we told the story of Patsy’s return Baja Bash with friends Maggie Busby and Linda Keigher. Patsy will be giving us a full report on the Nada Ha-Ha for our December issue. 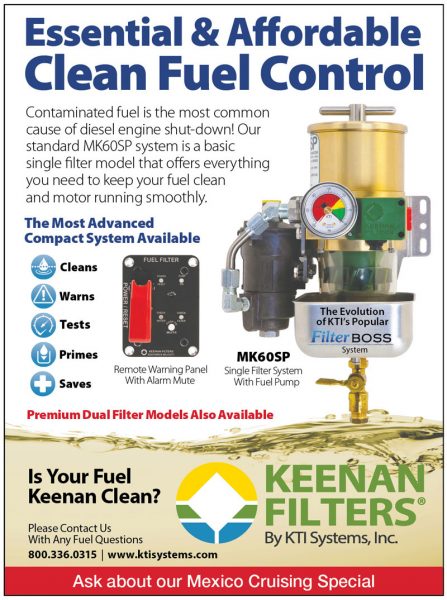 Much more than a fuel filter, Keenan Filter’s newest compact fuel management system offers everything needed to ensure clean fuel delivery to the motor, no matter the source. Every engine runs better with a system that cleans fuel, removes water and senses when it’s time for service. The KEENAN FILTERS® system is the most efficient and most reliable fuel maintenance system you can install.

Ask about the Mexico Cruising Special at: Keenan Filters.

“My husband and I and our son enjoyed our own Delta Doo Dah the first week in October on our Catalina, La Vida,” writes Joan Mellon. “We first sailed to the Delta 40 years ago and have done many summer trips through the years with our children and grandchildren.”

“We were anchored off False River near Franks Tract. Beautiful sunrises, sunsets, warm waters and temperatures! Perfect place and time to relax and recharge during this pandemic — no masks required!”

“Below is a watercolor sketch and a poem from my journal, along with some photos.”

Casual, no sign ups, anyone, anything can join
on the ebb, on the flood, two opportunities every day.
I have been a faithful spectator in the bandstand, La Vida’s cockpit.
I smile when the parade begins, sometimes with the circling flight
of the resident, snowy white egret,
sometimes with the formation flyover of forty black sparrows.
And then the silent parade of lime green hyacinths begins.
One by one they come following each other down the parade route,
down the center of the slough though some more to the left and some to the right.
If too close to shore, they are held for a moment or for six hours until the next parade comes through.
There are mostly little lime green clumps, one looking just like the other,
but there are often a few standouts
like the one with a curly, dying stem which still reaches skyward
looking quirky as an alien from Mars.
And like the one with a still blooming, beautiful purple hyacinth
which pauses briefly, almost like saying, “I know you want to draw me.”
And then the grand float, an island of hyacinths joined together
almost spanning the width of the slough.
The ebb and flood parades will continue after we raise the anchor.
I will remember them and each and every hyacinth participant
that gracefully showed up and entertained me
and reminded me to remember
the peaceful flow of nature through ebbs and floods
and reminded me to show up.

Today’s puzzler comes to us from Peter Detwiler. “You may remember me as that goofy Sacramento guy who owns a set of signal flags, who’s frustrated by not sailing on the Bay. You ran a couple of my hoists during the early weeks of COVID semi-isolation. I composed a new two-word message for my neighbors, and I wanted to share it with you too. Remember that the shorter flags with the pointy ends (the two on the far right) are ‘repeater’ flags.”

Can you figure it out without scrolling down to check the key to the international flags and pennants? Peter sent this to us in October. It’s a timely message. Does it have to do with Halloween? Día de los Muertos? The changeover from Daylight Saving Time to Standard Time? Or something else?

If you give up, go ahead and scroll down for the key to interpreting the signals.

SHARE ON Tweet Share Email Linkedln
1 Comment
Receive emails when 'Lectronic Latitude is updated. SUBSCRIBE
'Lectronic Latitude: Friday, Oct 30
Falling into our Newest Edition
November Magazine Out Today
We've put together a fun- and fact-filled issue of Latitude 38 magazine to see you through the next 30 (+ 1) days. Here's a preview . . .
Racing in a Glorious Westerly
Wind Gods Smile upon Islander 36 Nationals
We went from an unhealthy air situation on the Bay on Friday to a glorious 10- to 12-knot westerly with crisp blue skies and sparkling water.
Sponsored Post
Brickyard Cove Marina Has Slips to Rent
We are very excited to announce that we have completed our dock replacement project for A through G dock at Brickyard Cove Marina, and now have openings in most sizes.
Name the spot
Guess Where
Do you know where this is? Give us your best guess.
The Science of Ghost Ships
Halloween Revives Sailors’ Stories of Fear
With Halloween just off our bow, it is time to apprise you of ghost ships, those vessels that sail on the sea, absent of living crew: portents of doom.
More 'Lectronics »
Report Listing