The moment had been five years in the making. Viveka arrived at Rutherford’s Boatshop in Richmond in 2015 for a full restoration. But the owner ran out of money and the boat sat for four years until British entrepreneur Sir Keith Mills bought her and gave Jeff the go-ahead to resume work. COVID-19 provided another speed bump, reducing the crew of 18-20 earlier this year to just four or five. (Quarantine requirements also meant Mills could not attend the launching.)

In a way, it was kind of déjà vu all over again. At her original build in 1929-1930 at the George Lawley yard in Massachusetts, the Frank Paine-designed Joan II was to be a ‘fast cruiser’ for J.P. Morgan (or someone in the Morgan family). When the Great Depression hit, work on the boat stopped and the yard took possession. The boat sat for three years before Lawley decided to complete her as a staysail schooner.

But just as happened 90 years ago, it all came together again. Maria Barahona, wife of boat captain Geri Atkins, did christening honors. Two days later, the masts and rigging were fitted. There is about two weeks’ more work on the deck layout and interior before sea trials begin. The good news is that those will occur on weekends, so local sailors will be able to see this historic boat — which has been based in the Bay for many years — in action once again.

After sea trials, Viveka will be loaded onto a freighter for Florida, then onto another freighter bound for Palma de Mallorca. She’s due there in February to prepare for the classic yacht circuit in the Mediterranean next summer. She will eventually be homeported in England.

Read more about Viveka’s rebuild and history (including her longtime ownership by Merle Petersen) in Sightings in Latitude 38‘s May 2020 issue.

Over the past several weeks we’ve been sharing stories from sailors who have remained in or journeyed to Mexico during the COVID-19 pandemic. This week we received a letter from Petaluma-based sailors Rich and Laura Brazil, who have spent several seasons in Mexico aboard their Nauticat 43, Tally Ho. Here’s how they describe a recent trip down south.

Laura and I made a quick trip to Paradise Village Marina, Puerto Vallarta (PV), to check on Tally Ho. It had been seven months, and naturally, we were a bit apprehensive. I’m happy to say we were pleasantly surprised! The San Francisco Airport COVID protocols were strictly enforced and our airport experience felt safe. There were very few travelers. Our flight to Los Angeles (LAX) had 21 passengers.

The airplane was another story. Why on earth do some people wear their mask UNDER their nose? It drives me crazy! I kept my mouth shut and mask on. The passenger count from LAX to PV was 50, with plenty of space to feel safe. (Except for the morons wearing chin masks.)

Arriving in Puerto Vallarta was a breeze. Temperature checks and hand sanitizer are more prevalent in Mexico than in the US. I chuckled when our dock neighbor said he had heard nothing but COVID horror stories about the US, while we hear nothing but the same about Mexico.

Our Uber from the airport had a very polite masked driver with hand sanitizer, and the marina staff followed suit. We went to several local restaurants, including lunch on the well-spaced beach. The beaches in PV are open but heavily regulated, which is surprising for Mexico. We were escorted to our designated palapa and given specific instructions. Each time out, we observed everyone doing the right thing, making us feel very safe. I hope this helps for would-be travelers. 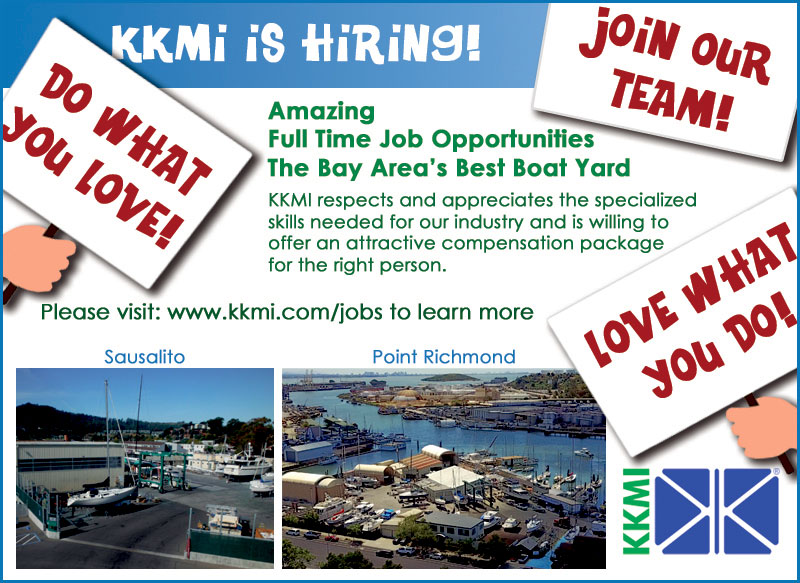 When Philippe Jamotte slipped out of San Francisco Bay on Thursday, October 1, he was hoping for a quick 200-day singlehanded lap around the planet. He got off to a quick start, with seven or eight 200+-mile days, before closing in on the ITCZ (Intertropical Convergence Zone — otherwise known as ‘the doldrums’) and a series of mishaps that suddenly reversed his fortunes.

Squalls, broaches, lost spinnakers and sheets, plus a tangled spinnaker sock, all combined to slow his progress while reducing his sail inventory. In the midst of these losses the hydraulic autopilot required repairs, adding further concerns. Finally, a mysterious crack appeared in the boom — a crack that looked very challenging to repair.

After all that, on October 16 Philippe decided it was probably smart to turn for home. He wrote in his blog, “Tallying up the losses and damages incurred so far, in particular the uncertainties around the boom, which would lead me to downsize the mainsail, this boat’s main sail engine, I’ve decided it would be better, safer and hopefully more constructive, to turn around, go home. I’m pointing the bow a little East of Hawaii. If weather permits I’ll bend the course for San Francisco in a week or so.”

While on his solo voyage, Philippe sailed with his ‘friends’ — anthropomorphized sails like his big asymmetrical spinnaker, appropriately named ‘Big.’

Philippe described his relationship with ‘Big’ thusly: “‘Big’, you were always quiet, lying low in your bag in the forepeak. You barely had any scar from your previous battles on the French racing circuit. In fact, you are a hand me down from Class40 #115. We struggled to get to know each other. I didn’t know how to handle you. But Sylvain [Sylvain Barrielle, UK Sailmakers San Francisco] made a few adjustments to your sock, certainly not an ATN sock, and then you were ready, looking fit for a trip to nowhere. Your sock! She had trouble, and was the cause of your demise. That and of course bad luck, and a novice skipper. For that I’m sorry; it didn’t have to come to this. But while we sailed together down to the doldrums, you gave me my best moments of sailing. Such a beauty it was to see you pull Changabang away from land and into the vast Pacific Ocean. Such pleasure it was to steer Changabang under your power. You sent us clear of Marie [a threatening Eastern Pacific hurricane]. And now you rest in tatters. May your efforts not have been in vain. I’ll miss you. And the lost spinnaker sheet. At least I didn’t let you out to soil the sea. Although tempted to cut you off as you were desperately trying to hug on to CaB (Changabang), being torn apart by the weight of water, I mustered all I had to get you back aboard, as I would have for my best friend. You belonged to the air element. Not water. You were great. You were “Big”. And now I mourn your retirement.”

For now Philippe and Changabang have things back under control. The boat is headed north, slowly escaping the grip of the doldrums. From there, Philippe hopes to continue north past Hawaii before looping east toward San Francisco.

We imagine Philippe’s quick ride out is going to make the slow, injured return home that much more difficult. However, his resourceful, questing nature assures us that this is just another chapter in a life full of future adventures at sea.

Visions of the Wild Festival has gone virtual! The annual film and arts festival would ordinarily be held each September in downtown Vallejo, but this year the festival is hosting a series of free monthly online events through its project 38°N. And while some of the events have already run, there are still several interesting sessions to be enjoyed.

The schedule of upcoming events includes:

Earlier events, “Authors David & Janet Carle describe their journey around the world on the 38th Parallel” and “Global Recycled Plastic Art Challenge – Launch Event,” are available to view on the festival’s website: https://visionsofthewild.org/events/

“Because Vallejo sits on the 38th parallel north of the Equator, the festival organizers decided to explore art and the environment from the perspective of our latitude. The 38°N project aims to connect with people around the globe who share our passion for nature, culture, and community.”

Visions of the Wild is organized by the USDA Forest Service in collaboration with the Vallejo Community Arts Foundation and a wide range of local partners and sponsors.

Our location provides boaters with ideal access to the Bay.

SHARE ON Tweet Share Email Linkedln
Receive emails when 'Lectronic Latitude is updated. SUBSCRIBE
'Lectronic Latitude: Friday, Oct 16
Bay Area Youth Gain Maritime Skills
Spaulding Marine Center Creates New Vocational Training Program
Spaulding Marine Center (SMC) in Sausalito is planning a new marine vocational training program aimed at preparing young people for a career in the maritime trades.
Pottering About on the Bay
Cruising Through a Bay Area Fortnight
While many would likely consider a Capri 26 to be a small boat for a two-week cruise, it seemed a veritable palace when compared to Phil's Potter 19 or Dan's Montgomery 15!
Sponsored Post
Modern Sailing School & Club Is Hiring
Complete your ASA IQCs at MSC! Our new instructors receive 100% tuition reimbursement for each clinic after teaching their first course at the level.
Birthday with a Difference
32 to 33 at Sea
When I looked up at the Golden Gate Bridge I fantasized about what it must feel like to sail out to sea with only ocean on the horizon and water miles deep below me.
America's Cupdate
American Magic Launches Patriot in Auckland
American Magic, the one viable US Challenger for America's Cup 36, splashed Patriot, their second AC75 on Friday morning.
More 'Lectronics »
Report Listing