We don’t know about you, but it seems to us there’s been a decided dearth of good news in this weirdest of years. So we were particularly thrilled to receive, and pass on, the following . . .

You may recall the story in the April 2019 issue about the shipyard accident involving the historic working brigantine Vega. In a nutshell, during a routine haulout at a shipyard in Thailand, the carriage wheels on the marine railway collapsed and the 128-year-old wooden ship (built in 1892 in Norway as a Baltic and North Sea trader) rolled off and onto her port side. A bungled attempt to roll her upright resulted in her rolling over onto her starboard side. The incoming tide did the rest — flooding the interior and ruining all electronics and machinery, as well as all personal possessions of Shane Granger and Meggi Macoun. The couple purchased Vega in 2001, and for the last 15 years, have run the vessel as a nonprofit humanitarian supply line to dozens of small Indonesian islands. Cargos have included everything from medical test equipment and pharmaceuticals to laptop computers, vegetable seeds, school supplies and reading glasses.

With almost zero help from the boatyard, a group of volunteers spent the remainder of 2019 — 12 hours a day, seven days a week — restoring Vega to seaworthy condition. Eighteen broken frames and 26 planks were replaced, as were all wiring and instruments. “Without the financial support of our friends who normally provide medical and educational supplies, Vega would have been lost,” says Shane.

With the ship finally back afloat and waiting for a weather window at Rebak Marina in Malaysia earlier this year, COVID-19 brought all plans to a screeching halt. Shane, Meggi and the volunteers took a deep breath, then dove into the hundreds of jobs that still needed doing. When it’s possible to finally cast off the docklines, Vega is ready to deliver a long list of supplies and equipment that — after two years away — are needed now more than ever.

Look for more on this uplifting story in the September issue of Latitude 38. In the meantime, check out www.vega1892.com to learn more about Vega’s mission, the out-of-the-way places they assist, and, if you are so inclined, how you can help.

It’s not an America’s Cup unless there’s some controversy. The most recent and serious controversy involved the misappropriation of funds by ETNZ in New Zealand. However, today the Ministry of Business, Innovation and Employment (MBIE), in consultation with host partner Auckland Council, announced it has completed its audit into allegations made against Emirates Team New Zealand Limited (ETNZ) and America’s Cup Event Limited (ACE).

The forensic accountants, Beattie Varley, reported that there was no evidence of financial impropriety or misappropriation of funds. Their report also found that:

MBIE Chief Executive Carolyn Tremain said, “While it’s excellent to confirm that there has been no financial impropriety and the escalation process has concluded, the Beattie Varley report had raised some concerns around record-keeping relating to several historical matters.”

The process began after MBIE and Auckland Council (as hosts) were made aware of claims relating to the organization of the 36th America’s Cup, which prompted an investigation by Beattie Varley and triggered an escalation process under the Host Venue Agreement.

“It was important to work through the audit process and confirm that there was no financial impropriety or misappropriation of funds,” said Tremain. 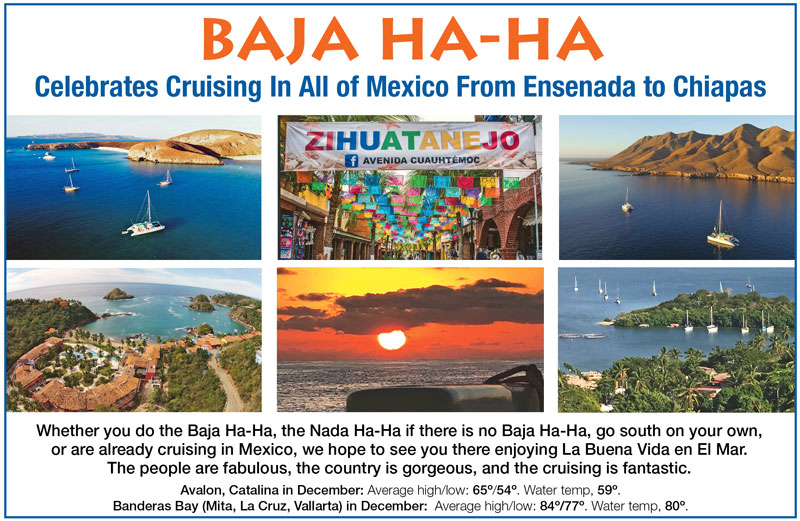 Celebrate cruising in all of Mexico from Ensenada to Chiapas.

Professional sailor Lia Ditton left San Francisco Bay on June 17 to embark on a journey from the Bay Area to Hawaii. But instead of sailing, Lia is rowing the 2500 miles across the Pacific — solo. This intrepid woman is now approximately two thirds of the way across, having covered around 1800 miles with around 700 to go.

Lia departed from Corinthian Yacht Club on June 17, at 11 p.m. This presented her first challenge — a stiff breeze and a slow outgoing tide kept her progress in check. And then there were the container ships, one of which announced its presence with a long blast of its horn. However, several hours of rowing saw Lia clear of the shipping lanes and their enormous vessels. By 9:34 a.m. on June 18, Lia was ready to take her first, and well-earned, rest.

To date Lia has endured headwinds, rough seas and soakings, and has been rolled twice and followed by sharks. Nothing unusual for a crossing, but when you consider that Lia is aboard a 21-ft rowboat, you begin to imagine only a fraction of the discomfort she may experience at times.

“As I stand to enter the cabin, an exceptionally well-timed wave crashed over the cabin top, over my head and down the neck of my jacket. My day didn’t get better from there. The bottom of my bunk was wet from the open air-vent.” Lia posted this on her website.

Lia’s first shark encounter came on day 19. “I am one second from pulling on the sea anchor retrieval line, when a 7-ft shark sashays by.” So what did Lia do? Grab her GoPro. Of course!

“I extend the stick ready to film, delighted I bought a longer stick for this journey. But once the stick reaches its full 38 throe, 38 doesn’t seem enough stick between me and the shark.”

Lia identified her companion as a blue shark, and wondered whether the species made a habit of swimming clockwise around boats. Mr. Shark, as she came to name her friend, had swum beneath her boat and completed several laps before they eventually locked eyes. By now Lia was ready to pull in her sea anchor — the task that she had temporarily abandoned when the shark appeared. The shark then departed, leaving Lia to no doubt marvel at the unique experience.

Soon after came the first knockdown. Lia was in her cabin when a wave slammed the boat and rolled it onto its side. Fortunately there was no damage. This is not Lia’s first ocean rowing adventure, and each one brings its own set of challenges. But every sailor knows that alongside the challenges, there are many uplifting moments that make the journey even more worthwhile.

“In the morning, the sun is streaked from cloud to horizon in thick gold bands. It reminds me of early century paintings and the gold-leafed auras around the heads of Byzantine holy-men,” Lia writes on her website.

Lia had hoped to complete her journey in 53 days. So far she has been at sea for 63 days and now hopes to finish in under 99 days, which is the record set by Roz Savage — the first, and so far, only woman to row solo across the Pacific.

Lia, we wish you well and will continue to follow your journey.

You can read more of Lia’s diary entries and follow her progress at rowliarow.com.

The US Coast Guard is conducting a Waterways Analysis and Management System Study on the Shallow Draft System (waters less than 12 feet deep), to update its policies and make navigable waterways of the United States safer and more efficient.

“Our waterways have become increasingly congested and complex,” states the USCG announcement. “While the number and size of the vessels traveling through the U.S. Marine Transportation System has increased, the number and in some cases size of U.S. navigation corridors has not. The recreational boating industry has also seen steady growth over the last decade further congesting the waterways.”

To address these changes and determine navigation requirements for the Shallow Draft Waterway System, the Coast Guard is soliciting feedback from local maritime partners and stakeholders that operate on the affected waterways.

The study’s purpose is to determine the navigational needs and requirements of vessels operating in shallow-draft navigable waterways throughout the country. The study will focus on the existing shallow-water Aids to Navigation system, future development projects, waterborne commerce transiting these waters, and marine casualty information.

The CG invites waterway users, interested parties and stakeholders to provide comments or feedback via the tool posted at https://www.surveymonkey.com/r/ShallowWaterWAMS. This link will remain available until November 1, 2020. You also email questions or comments to [email protected]. Use the subject line “Shallow Draft WAMS.”

So you’ve bought a new boat. Now what? There are important decisions to be made in the first weeks, perhaps months.

For registration information, go to www.oaklandyachtclub.com or call 510-522-6868.

SHARE ON Tweet Share Email Linkedln
Receive emails when 'Lectronic Latitude is updated. SUBSCRIBE
'Lectronic Latitude: Monday, Aug 24
T-shirt Winners Galore
Another Golden Ticket Winner Comes Forward
Steve Lehmann is Latitude 38's latest Golden Ticket winner. Steve and his wife, Terri had spent the past five months in Utah. One of the first things they did when they returned to the Bay Area was pick up a copy of the magazine at Marina Village, Alameda. Inside was Steve's ticket to a free Latitude 38 t-shirt.
Small Boat Sailing Returns
Request from a New Sabot Owner
A new Sabot owner is seeking the back story of his vessel.
Sponsored Post
KKMI Is Hiring
KKMI respects and appreciates the specialized skills needed for our industry and is willing to offer an attractive compensation package for the right person.
Unusual Navigation Markers
Keeping a Good Lookout
There are a thousand reasons to keep a good lookout. Modern navigational aids and numerous digital devices continue to improve and reduce accidents at sea. Despite all that equipment, it remains very important to keep an eye ahead and even read the signs along the shore.
Crashboat Joins Bay Area's Historic Fleet
Crash Boat ‘Intrepid’ Comes Home to the Bay
The San Francisco Bay area has many historic and treasured vessels of the World War II era: 'Jeremiah O'Brien' and 'Red Oak Victory', Potomac, and the submarine Pampanito. So when we received this story about the 1944 vessel 'Intrepid', we felt it was worth sharing with our sail-centric audience.
Baja Ha-Ha
Baja Ha-Ha & Mexico Cruising
We hope to see you cruising in Mexico and enjoying La Buena Vida en El Mar. The people are fabulous, the country is gorgeous, and the cruising is fantastic.
More 'Lectronics »
Report Listing