In honor of this past Sunday’s International Women’s Day, we wanted to make mention — albeit in an abbreviated, Wikipedia form — of a few sailors who stand on the mantel of history with their accomplishments.

Mary Ann Brown Patten was the first female commander of an American merchant vessel. Patten was the wife of Joshua, captain of the merchant clipper ship Neptune’s Car, which was bound for San Francisco from New York, via (of course) Cape Horn, in approximately 1856. “Joshua Patten collapsed from fatigue in 1856,” Wikipedia said. Mary Ann took command for 56 days, faced down a mutiny, and successfully managed to navigate Neptune’s Car into San Francisco Bay.

She was 19 years old, and pregnant with her first child.

Grace, or Gráinne, O’Malley was lord of the Ó Máille dynasty in the west of Ireland in the 16th century. O’Malley was known as “The Sea Queen of Connacht” and “The Pirate Queen.” She was “a fearless leader, by land and by sea, a political pragmatist and politician, a ruthless plunderer, a mercenary, a rebel, a shrewd and able negotiator, the protective matriarch of her family and tribe, a genuine inheritor of the mother goddess and warrior queen attributes of her remote ancestors,” according to Wikipedia.

“When Lisa Blair signed up for the Solo Trans-Tasman Yacht Race, there was one teeny, tiny problem: she didn’t have a boat,” according to the website Gutsy Girls. “Neither that, nor the fact that it was her first solo sailing trip, could stop her. She found a yacht, made her way through the treacherous water, and went on to become the first woman to sail solo around Antarctica in 2017, and Australia [in 2018].”

In 1965, Sharon Sites Adams became the first woman to singlehanded from California to Hawaii. It took her 39 days. In 1969, Adams sailed from Yokohama to San Diego aboard the Mariner 31 named Sea Sharp II. She was also the first woman to accomplish this feat. The voyage took 75 days.

“[Adams] took her first sailing lesson at Marina del Rey in 1964 at the age of 34,” according to Wikipedia. “She was the only civilian besides the captain’s wife on the bridge of the Queen Mary when it rounded Cape Horn on its final voyage to Long Beach.”

This is just a small sampling of some luminaries in women’s sailing. For a deeper dive, we recommend the blog Aleria’s Adventures by Daria and Alex Blackwell, both of whom are certified captains.

Whom did we miss, or whom should we know about? Please comment below, or write us here.

Latitude 38 must have a million photos of boats sailing in, under, around and out the Golden Gate. Perhaps none of them are filled with the tension that surrounds the shot below. From a vantage point at Travis Marina, Latitude 38 sales manager and roving reporter Mitch Perkins captured the Grand Princess as she ‘sailed’ in this morning on her way to a berth in Oakland.

With all the uncertainty usually associated with racing in the Three Bridge Fiasco, health officials are developing a plan to navigate the evolving COVID-19 crisis. According to SFGate, the ship is sailing to a fenced-in 11-acre site in the Port of Oakland. According to Governor Newsom, the Port of Oakland was chosen for docking because of its proximity to an airport and a military base.

On a positive note, we remember that the 2008-09 financial crisis was a popular time to practice a ‘staycation’. We live in one of the most popular tourist destinations in the world with the opportunity to sail our boats locally in one of the best sailing venues anywhere. Fresh air, sunshine, breeze and sailing the Bay may be the best ways to weather this storm.

“The cure for anything is saltwater — sweat, tears, or the sea,” wrote Isak Dinesen. 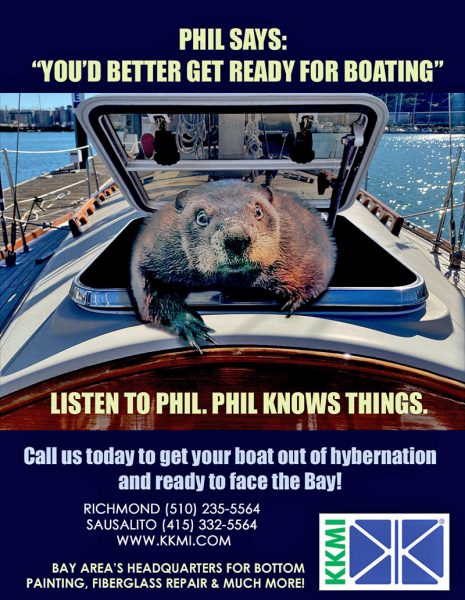 The Division of Boating and Waterways (DBW) offers grants to help local public entities enhance safety on California’s waterways and clear them of abandoned vessels. The application period for the grant programs, Boating Safety and Enforcement Equipment (BSEE) and Surrendered and Abandoned Vessel Exchange (SAVE), will be open from March 16 through April 16, 2020. Applicants should review the grant guidelines and participate in a workshop.

Up to $1 million is available to local government agencies that can demonstrate a need for patrol boats, engines, personal watercraft, search and rescue equipment, and patrol and diving equipment. These competitive grants are intended to augment existing local resources and not to fully fund boating safety and enforcement patrol units. The US Coast Guard Recreational Boating Safety Program provides BSEE grant funding.

Up to $2.75 million is available to local public agencies statewide to receive surrendered vessels and to remove and dispose of derelict vessels on coastal and inland waterways. Grant funding comes from the Abandoned Watercraft Abatement Fund. DBW awards grants on a competitive basis to eligible public agencies based on demonstrated need.

Applications for both grant programs must be submitted to DBW through its Online Grant Application System (OLGA). Prior to applying, the division encourages new applicants to view a 45-minute webinar that provides detailed instructions on creating an account in OLGA and navigating the application system. DBW will also host two-hour workshops for each grant program to help applicants write competitive applications.

Interested applicants can also access the workshops via teleconference. The workshops will be recorded for those who can’t participate in the live presentations.

Once grant applications have been reviewed and scored, DBW will send out notice of award letters via OLGA. They expect to announce awards by August 2020. Find more info on DBW’s website, https://dbw.parks.ca.gov.

For some, there’s a bonus inside. Each month we tuck a few flyers into random copies of Latitude 38 so that some lucky readers have a chance to win a free Latitude T-shirt when they pick up their magazine. In February, Philip Ziman, owner of the Jeanneau Sun Odyssey 42DS Touché, found a flyer in the copy he picked up at the Marina Village harbormaster’s office.

Phil wrote, “Ahoy Latitude! I picked up my issue on the way to my boat at Marina Village Gate 11. I would wear a medium-size Latitude T-shirt proudly. My wife Jill and I enjoy day, overnight, and Delta (Doo Dah) trips around the Bay in our Jeanneau Sun Odyssey 42DS. As Coast Guard Master, I captain charter boats including Touché. I also teach sailing at Club Nautique and race Columbia 5.5s in the Estuary. We belong to Encinal Yacht Club. Best, Captain Pip.”

His T-shirt is on the way. The new March issue has been delivered with a few more flyers tucked in. If you haven’t picked one up, you can find one here. 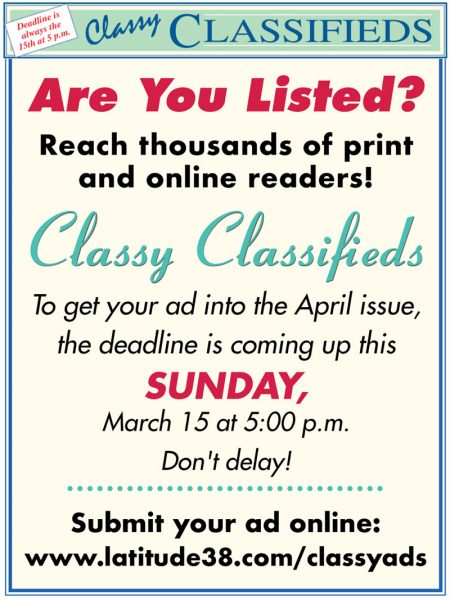 SHARE ON Tweet Share Email
Leave a comment
Receive emails when 'Lectronic Latitude is updated. SUBSCRIBE
'Lectronic Latitude: Friday, Mar 6
Social Distancing?
Crew Party Exceeds Expectations
The latest buzzword popularized in the news is "social distancing." Given the fears of a CoViD-19 pandemic, we at Latitude 38 feared for a smaller-than-usual turnout at last night's Spring Crew List Party.
Latitude in New Zealand
Reporting from the Bottom of the World
In the weeks before I flew to New Zealand, I would look to the west and south, and imagine that I could see the tiny islands hovering in the Pacific, well past the earth’s bulbous middle and deep into the far reaches of the planet.
Sponsored Post
Workaholics Adrift by Judy McCandless
Workaholics Adrift is a travel memoir that follows a corporate workaholic who discovers her humanity via extended travel.
Hit the Big Time
Registration Open for Rolex Big Boat Series
With an eye toward expanding a Classics Division that saw marked interest and exciting race action in its inaugural year, the Rolex Big Boat Series will return to San Francisco Bay this year on September 17-20. St. Francis Yacht Club is now accepting entries.
More 'Lectronics »