The latest buzzword (buzzphrase, actually) popularized in the daily news cycle is “social distancing.” Given the fears of a CoViD-19 pandemic, we at Latitude 38 feared for a smaller-than-usual turnout at last night’s Spring Crew List Party. For those who did venture out to this gathering of sailors, we were prepared with lots of hand sanitizer, disinfectant wipes, and frequent hand-washing by your faithful crew of staff and volunteers.

What we didn’t expect was a line out the door at the 6 p.m. start time and a packed house at host Golden Gate Yacht Club. Was the Bay Area going stir-crazy? Or are the locals just crazy about sailing? We’re not sure, but we’re glad for the swarm of sailors young and old, new and experienced, and well balanced between male and female.

Highlights of the evening included demonstrations by the San Francisco Sailing Science Center. They don’t have a home facility yet, but they brought several exhibits to share with partygoers.

Ron Young attended the party to introduce the new Wosser trophies. They’re a joint project with Latitude 38. The three trophies are offered for “the purpose of honoring Jake, Ruth and Susie Wosser and encouraging friendly contests of yacht racing and seamanship on San Francisco Bay.”

The Jake Wosser Trophy will reward the winner of the largest one-design regatta on the Bay in any given year. The Ruth Wosser Trophy, in honor of Jake’s widow, will reward the boat owner who has competed in the most race days in any one year. The Susie Wosser Trophy will honor Jake and Ruth’s daughter, who crewed with Jake and became a great skipper in her own right. This trophy will be awarded to the boatowner who takes the most people racing in any given year. Also attending were members of the Wosser Trophy Advisory council, including from South Beach, Sausalito, Encinal, Richmond and St. Francis Yacht Clubs. You can read more about the Wosser Trophies in Sightings in the March issue at https://www.latitude38.com/issues/march-2020/#58.

The next Latitude 38 Crew List Party will be held on Thursday, September 3, at the Bay Model Visitor Center in Sausalito. We hope to see you there!

In the weeks before I flew to New Zealand, I would look to the west and south, and imagine that I could see the tiny islands hovering in the Pacific, well past the earth’s bulbous middle and deep into the far reaches of the planet. New Zealand has always felt like one of the last outposts before the fury of the Southern Ocean and the icy extremes of Antarctica.

I couldn’t help fantasizing about the idea of sliding down a few longitudes, while smashing through the earth’s horizontal lines to arrive at a southern latitude nearly corresponding to the Bay Area’s in the north. The romance, of course, is the place itself, those who lived there first and those who stumbled onto it many years later.

Aotearoa, or New Zealand, has long been on my bucket list. As you might have heard, there’s quite the sailing culture down here, not to mention this little regatta set to go down next year. What better time to arrive than now? Not that there ever could have been a bad time.

My guide for this trip will be the late Tony Horowitz and his Captain Cook biography/travelogue Blue Latitudes. Of Cook’s expeditions vs. his own travel, Horowitz wrote, “If I’d been aboard the original Endeavour, the journey ahead would have loomed rather larger: 1,052 days, to be exact, assuming I was among the 60% who survived. This was a notion I struggled to wrap my mind around. I’d often felt sorry for myself when flying to and from Australia. 20 hours in the air! A forced march through movies, meals, and mystery novels. Almost the limit of the modern traveler’s endurance.”

I felt as if I had exhausted my heartiness for travel after catching the red eye to Auckland yesterday. (Or . . . what day is it, anyway?) With only 137 movies to choose from — not to mention the ever-important choice of red vs. white wine — I was ready to arrive and ready to experience what the country had always promised to offer. What is that promise? Tolkien-esque magic landscapes? Snow-capped mountains plunging dramatically into fjords? Exotic flora and fauna? Famously friendly people? Wine country? And sailing, sailing, sailing. Yes.

I was shocked, while taking a bus from Auckland to Northland, that (this part of) New Zealand does an uncanny impression of Marin, complete with golden, rolling hills, grazing cattle, and glimpses of rocky, wild coast.

And then, finally, the boats. So many boats. I’ve long heard a statistic that some 80% of New Zealanders own a sailboat, which seems easy to believe when you see the water.

At any rate, Latitude Nation, I am thrilled to be selflessly (ahem) reporting from New Zealand on your behalf for the next couple of weeks. Please stay tuned. 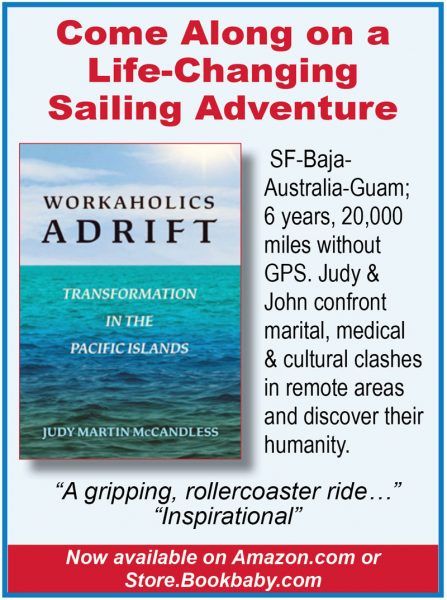 With an eye toward expanding a Classics Division that saw marked interest and exciting race action in its inaugural year, the Rolex Big Boat Series will return to San Francisco Bay this year on September 17-20. St. Francis Yacht Club has posted the Notice of Race and is now accepting entries.

“The Classics Division celebrates the origins of the Big Boat Series, which began in 1964,” says Paul Cayard, chairman of StFYC’s board.

The Classics Division will race the famed Bay Tour course once per day, with starts and finishes off the club’s race deck, one of sailboat racing’s most iconic settings, on the San Francisco Marina. “Today’s classic yacht owners are passionate about the history and beauty of their yachts, which should be celebrated by racing them,” adds Cayard, a 2019 participant in the Classics Division aboard the Rhodes 54 Ocean Queen.

“We’re excited to host both the J/88 NAs and Express 37 PCCs at the 2020 Rolex Big Boat Series,” says regatta chair Susan Ruhne. “We’re also ready to host another very strong J/105 fleet, and we’re looking for 30 or more boats to make up the most competitive J/105 division in any regatta on the West Coast.”

“We’re continuing to work with US Sailing and the ORR system as a major part of Rolex Big Boat Series,” Ruhne says. The club hosted a gathering on March 5 for skippers and owners to meet with ORR officials and the StFYC race office.

Conditions permitting, StFYC will conduct a total of seven races. Everyone except the Classics will sail two races per day for the first three days of racing. On Sunday, all divisions will sail the longer Bay Tour course, featuring a grand finale finish in front of the clubhouse. This final finish is a favorite with spectators. Every evening of the regatta will feature social gatherings for all participating sailors.

Registration is open through July 31. Find the entry form here. Congratulations to Iris Vogel, whose New York-based J/88 Deviation was the first boat to sign up.

SHARE ON Tweet Share Email
2 Comments
Receive emails when 'Lectronic Latitude is updated. SUBSCRIBE
'Lectronic Latitude: Wednesday, Mar 4
Birthday Revelations with Commodore
Warwick “Commodore” Tompkins turned 88 last Wednesday, and he and wife Nancy celebrated with family and friends on Saturday at the Sausalito YC.
First Event in the Southern Hemisphere
52 Super Series Season Starts in South Africa
After the first three days of sailing in the 2020 season, defending 52 Super Series champions Azzurra have used consistency to work their way to the top of the leaderboard in Cape Town, South Africa.
Entries Open May 8
Two Big Reasons to Do the Baja Ha-Ha
The Baja Ha-Ha has two big advantages over other outstanding West Coast long-distance events such as the Pacific Cup, the Singlehanded Transpacific Race and Transpac.
Jump the Puddle
Lessons Learned by 2019 PPJ First-Timers, Part 3: Having a Whale of a Time
After doing the Pacific Puddle Jump solo last year, Elana Connor wanted to share what first-time Jumpers learned in 2019 while sailing across the South Pacific.
Meet Fellow Sailors
Come to Our Spring Crew Party Tomorrow
Meet and greet fellow sailors. Find crew or get on a boat. Thursday, March 5, 6-9 p.m. Held at the spectacular Golden Gate Yacht Club in San Francisco.
More 'Lectronics »
Report Listing