This month in Latitude 38, the destination is wherever you are.

We’d like to think that we’re about more than just the sailboats and the ensuing adventures they may bring. More than the methods, Latitude believes in the dream. It is the simple idea of throwing off the docklines and pointing the bow toward the horizon that excites us most, and sustains us through the sometimes harsh realities of owning and maintaining a sailboat. We think that lots of people, whether they sail or not, have dreamt of an iridescent blue lagoon surrounded by a white-sand beach.

“Glance at a world map and you’ll see that Tahiti and her sister isles lie halfway between Panama and Australia — at what you might call the geographic center of the South Pacific,” wrote our editor-at-large Andy Turpin in Cruising West Beyond Tahiti — Where to Next? “Now take a closer look and you’ll see that there’s nothing but the color blue between the west coast of the Americas and the archipelagoes of French Polynesia. West of Tahiti, though, it’s a totally different story.”

“Clusters of alluring tropical isles are sprinkled across the entire 4,000-mile stretch between French Polynesia and Papua New Guinea, with the prevailing easterlies fueling the relatively short hops between them. It would literally take decades to explore them all — not to mention the extensive cruising grounds of New Zealand and eastern Australia.

“Despite the enormity of the subject, we’ll attempt to give you a capsule overview here of the cruising possibilities west of Tahiti — if for no other reason than to rekindle your cruising pipe dreams.”

Also in this month’s issue, Latitude contributor Elana Connor reports on her Soft Landing in New Zealand: “Many of my friends were making landfall in the bigger [New Zealand] city of Whangarei (pronounced Fong-er-ray), which is a few hours’ sail to the south and upriver, but Opua, in the Bay of Islands, is the only place on the North Island where you’re allowed to arrive with an animal aboard. I crossed my fingers and hoped we’d find the facilities, marine supplies, and experts we needed in this tiny upriver village. Luckily, Opua has it all, and a skipper couldn’t wish for a better spot to make landfall and linger awhile.”

“For the past three years, the city of Sausalito has been working on a new general plan, or a discussion and ultimate vision for how the municipality will evolve into the future,” we write this month in The Future of the Marinship — Sausalito’s Working Waterfront. Such planning, which all cities undergo every few decades, is no small undertaking in the Bay Area, where the pressures of limited housing, swelling traffic, gentrification and rising sea levels make directing growth a difficult task. This is especially true in Sausalito, which has long struggled to retain its salty identity.”

“Many advocates of Sausalito’s working waterfront worry about the fate of the Marinship, a roughly mile-long swath of waterfront that’s home to multiple boatyards, woodworking shops and marine services, as well as a ‘light industrial zone’ that houses numerous businesses producing cutting-edge innovations. Originally a WWII shipyard, the Marinship is, in many ways, the salty and cultural heart of Sausalito, but also a commercial and industrial hub where more than 300 businesses operate.”

“Less than a year from now, America’s Cup race fans will converge on Auckland, New Zealand, to marvel at the spectacle of AC75 foiling monohulls racing around Hauraki Gulf competing for the Prada Cup Challenger Selection Series followed by the 36th America’s Cup Match,” writes our Racing Editor Chris Weaver in Save the Dates — America’s Cup 36 on the Horizon. “This got us to imagining that some of our readers might be among those on-the-scene spectators, having sailed their own boats to New Zealand, perhaps in the aftermath of a Pacific Puddle Jump.”

But Wait, There Are So Many More Destinations!

In addition to the previously mentioned blueprints for living the dream, the February issue of Latitude 38 is also packed with all the regular goodies, like  Sightings, Changes in Latitudes, Max Ebb, World of Chartering and Loose Lips, which, of course, has the winner of this month’s World Famous Latitude 38 Caption Contest(!).

Don’t forget that you can pick up the February issue of Latitude at these locations. Happy reading, everyone, and don’t stop dreaming.

While we were at the Herring Celebration at the Bay Model last weekend, we ran into Sausalito sailor and Sausalito Community Sailing Center booster Mary Gidley. While we were talking with her son, Memo, owner of the Elliott 1050 Basic Instinct, audio producer John Fecile stopped by. He mentioned that Mary would be on KQED’s Snap Judgment. The show will air at 1 p.m. next Saturday, February 8 (rescheduled from February 1).

Fecile said he’d had a terrific interview with Gidley about her ’70s adventure, crossing the Atlantic on a raft with 11 people as part of a social experiment. The story was recently turned into a documentary film called The Raft. So now her adventure on the water will be on the air. 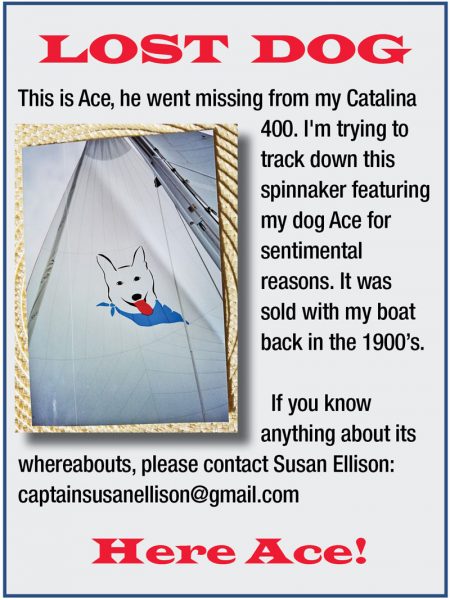 Many Midwinter series continue and a few wrap up. Those saying “done and dusted” in February include:

Not all races in the winter are ‘Midwinters’

San Diego YC will host match racing in California Dreamin’, February 1-2. This will be the first in the three-event series, and will be sailed in J/22s.

Treasure Island Sailing Center will host BAYS kiddos for sailing in or near Clipper Cove, February 15-16.

Latitude 38’s publisher recently noticed that we have a Leap Saturday this year. “Sounds like a good theme for a party!” he said. “You won’t be able to sail on a Saturday, February 29, again until 2048. It’s also one of four months in 2020 that contain five Saturdays. Three events are scheduled that day: Sail a Small Boat Day at Richmond YC, the SSS Corinthian Race, and Encinal YC’s Jack Frost Midwinters. Of course anyone else can just go sailing for the fun of it.”

Corinthian YC’s new rear commodore, Michael Chammout, wants to make the SSS Corinthian race a bigger deal. It’s already plenty big on the water, being the second race in the SSS series for singlehanders and doublehanders. The idea would be to enhance CYC’s shoreside support of the racers and the SSS race committee. (Full disclosure: Michael also races in the SSS with his Beneteau First 10R Mulan.) Registration is open for this Bay tour on February 29.

As noted above, Richmond YC will host Sail a Small Boat Day on February 29, 10:30-3:30. This free event is open to all ages and experience levels. Bring clothes that can get wet (and something to change into). Bring a PFD if you have one; if not, you can borrow one. Boats available to try out range from El Toros and Sunfish to 29ers, Snipes, Wabbits, International 110s and so many more. There’s even a free hot dog lunch!

For many more events in February, check out our Calendar, published in the February issue of Latitude 38, making the rounds even as we type this. We’ll preview some off-the-water events in ‘Lectronic Latitude next week. 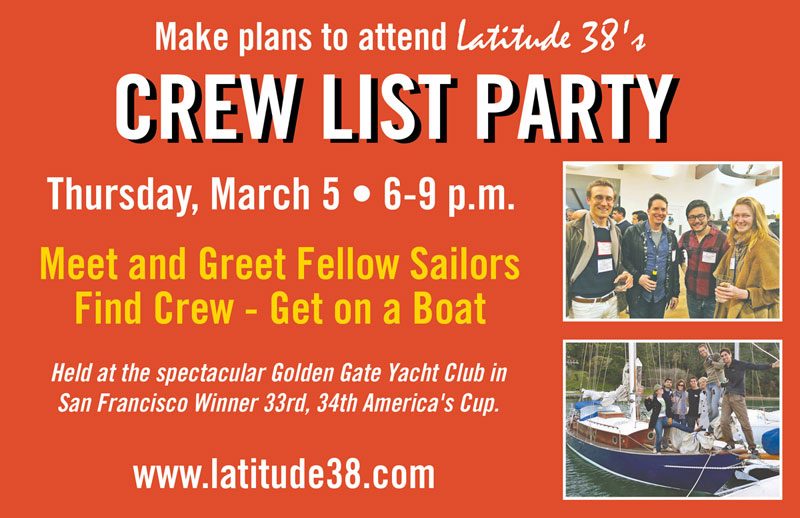 SHARE ON Tweet Share Email
Leave a comment
Receive emails when 'Lectronic Latitude is updated. SUBSCRIBE
'Lectronic Latitude: Wednesday, Jan 29
In Old News . . .
Luna Rossa Loses Their Mast but not Their Minds
Another AC75 has crashed and burned, so to speak. A few days ago (it’s not clear to us exactly when) Luna Rossa dismasted while practicing off the coast of Marina di Capitana, Italy.
When you drop everything . . .
Diary of a Schooner Charter Cook, Part 4
Readers — This is part 4 of our writer-at-large Monica Grant’s continuing series about her new gig as a charter cook aboard the schooner Seaward.
Sponsored Post
South Beach Yacht Club 2020 Race Season
South Beach YC offers some of Northern California's finest year-round racing, including our mid-winter and summer race series, regional races, and select regattas.
The Return of the Rooster
Squid Pro Quo
I had the squid from a 2008 or '09 Opening Day on the Bay, and had been itching for another chance to use her. The Quid Pro Quo / Squid Pro Quo pun occurred to me, and…
Hands-on Experience
Taking the Plunge for Safety at Sea
On January 11-12, Del Rey Yacht Club in Marina del Rey hosted the second US Sailing two-day Offshore Safety at Sea Seminar. The 48 participants came from as far away as London, Anchorage and Manhattan.
More 'Lectronics »