Another AC75 has crashed and burned, so to speak. A few days ago (it’s not clear to us exactly when) Luna Rossa dismasted while practicing off the coast of Marina di Capitana, Italy.

This was the message from the camp of the Luna Rossa Challenge after the mishap: “No team member was injured in the incident, with the mast, sails and rig immediately recovered by the sailors onboard with the help of the shore crew on the support RIBs,” the New Zealand Herald reported.

“The teams are currently preparing for the first leg of the America’s Cup World Series, which gets underway in Cagliari, Sardinia, in late April,” The Herald continued. “It will be the first time teams race their AC75s in a competition setting and, while teams are expected to launch their second race boats later in the year, will give an indication as to where each team is at in preparations for the 2021 America’s Cup in Auckland.

Stay tuned for a World Series update in the February issue of Latitude 38.

Readers — This is part 4 of our writer-at-large Monica Grant’s continuing series about her new gig as a charter cook aboard the schooner Seaward. Her husband Jay is the captain.

After sailing for days, we made our first shore stop at Bahia Tortugas, anchoring just a few hundred yards from the beach. Over several ferry-boat shuttles, we took everyone to shore to explore the town.

Jay and I, and our daughter Amber, who had joined us in Newport, walked the streets in a wandering fashion. Many of the homes looked unoccupied, as did what we took to be stores or businesses. How could this town survive? There were people about, driving by, watching us silently from verandas or behind closed windows, but there was little that showed any form of employment or means of income. As we wandered we were accompanied by a local dog that seemed to have a mandate to escort us though the town.

Our wanderings took us to the local church that we had spotted from the boat, and as we walked through the gates we were met with dozens of people exiting the ornate, old-looking building. We had stumbled across a funeral. As nonchalantly as possible we crossed the courtyard and, hoping to become invisible, stopped under a large tree to take in the coastal vista.

After the deceased and the pallbearers had been loaded into the back of a pickup truck, the remaining mourners followed the vehicle out the gate and along the dusty street. We waited until everyone had left before we silently and slightly awkwardly made our way back to the beach. Here at least were signs of life. Fishermen were milling around half a dozen pangas, sorting lines and working on other tasks. And at the end of the pier a handful of young boys were dropping their lines into the water, laughing and heckling each other as they fished.

All too soon the 10 days were coming to a close and we were farewelling our guests, many of whom had now become like friends. The voyage had been hard work: 560 meals, plus one last breakfast, were achieved by how many hours preparation and cooking? I have no idea, and no desire to find out. But I do feel I succeeded in doing my job, and by the end of the second week I was creating even more free time and was actually taking part in crewing the boat. 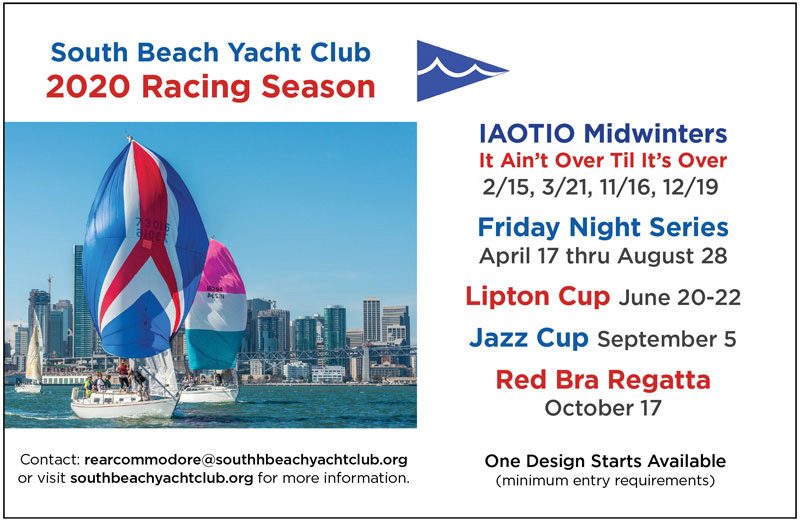 Early last week, Michael Moradzadeh of Tiburon had been considering entering his Santa Cruz 50 Oaxaca in the Three Bridge Fiasco. His plans for Saturday changed, but still involved getting the boat out.

“I had the squid from a 2008 or ’09 Opening Day on the Bay, and had been itching for another chance to use her. I made the squid myself from a surplus Chinese parachute and some spinnaker cloth donated by Pineapple Sails. The Quid Pro Quo / Squid Pro Quo pun occurred to me, and I reached out to the Trump Chicken people to see if we could team up. They took it from there, and we met on the boat to get out for a day on the Bay.”

The inflatable squid is 60 feet long. The 33-ft inflated chicken topped with a golden pompadour has made previous appearances on the Bay, including stints around Alcatraz wearing a prison shirt on the past two President’s Days.

Oaxaca’s crew and the “Chicken people” gathered that morning in heavy fog. “Don’t worry,” Moradzadeh chirped. “It will burn off.”

They inflated and hoisted the chicken and squid and headed out from Oaxaca’s slip at Corinthian Yacht Club. In the fog, Moradzadeh got off course. “I found myself on the coast of Sausalito before we turned left to head over to Blackaller Buoy and run down the Cityfront. A shotgun salute from the race deck greeted us as we passed Golden Gate YC.” Volunteers from the Singlehanded Sailing Society were starting the Three Bridge Fiasco off the GGYC race deck.

“Wherever we went, we got smiles and thumbs up. Except that one guy at Pier 39 who thought it important to flip us his own bird. I offered back to him the observation that perhaps he was not setting the best example for his child.”

“We carried on to the Ferry Building, doing a couple of beauty turns there before turning north again, passing Alcatraz and then heading home as our generator ran out of gas and the deflation process kicked in. It was a most satisfying day, and perhaps less frustrating than the drift I had been contemplating earlier that week.”

Saturday evening, while we were driving home from our own unfinished Three Bridge Fiasco, we heard Moradzadeh interviewed on KCBS radio. The stunt also made it into the San Francisco Examiner.

The 48 participants came from as far away as London, Anchorage and Manhattan. They also included the first junior sailor from DRYC: 11-year-old Helen Booker-Poletti attended the class, along with Karyn Jones, a renowned national match racer.

The first day was classroom only. The time flew with Bruce Brown providing his experience, expertise and anecdotes. Students learned about crew-overboard recovery and personal safety gear, including the care and maintenance of it. The topics included forms of emergency communication, giving assistance to other craft, fire precautions, marine and heavy weather, storm sails, damage control and repair/maintenance, SAR (search and rescue), pyrotechnics and signaling gear. Bruce said that most victims don’t die of hypothermia but perish from drowning. Most said they did not realize how much they would learn, and most of them had been boating for a number of years.

DRYC fleet surgeon Dr. Robert Merz presented the portion on medical topics. Being a sailor himself, he shared his experience and did an outstanding job with the slideshow presentation. He gave us a description of what goes on in the ER versus being on a boat with an injured party. There were questions about other incidents that occur, and Dr. Merz supplied the needed information. All gained a new perspective of what could happen and how to handle the injured party, especially if they’re unconscious.

Gary Green spoke about his and wife Rosalie’s experience having to abandon their boat in Mexico and waiting five hours to be rescued in rough seas.

On the second day, following an hour of classroom, groups formed for instruction in personal safety gear, damage control, maintenance and repair, firefighting and flares. The participants learned how to rig a Lifesling for rescue using real scenarios that included unconscious victims.

Everyone had to go into the pool with all foulies on, including boots. They learned how to survive while waiting to be rescued. They did a group huddle and learned how to form a caterpillar group, expressing amazement at how much warmer they were. Then they also learned how to get into the liferaft — no easy feat for some. All were surprised that being in the water for 25 minutes was not as bad as they’d thought it would be.

The seminar closed with a raffle awarding 75-ft throw ropes. The couple who rescued the Greens happened to have a throw rope aboard.

This course is geared for anyone who spends time on the water. It does not matter if they own a boat.

Graduates earn a five-year personal certificate that might one day save lives. One can’t exactly call an Uber in this situation. The Chicago to Mackinac, Pacific Cup, Transpac, Newport to Ensenada, and NHYC’s Newport to Cabo races require Safety Certifications.

Meals included in the entry fee featured a continental breakfast on Saturday and the skipper’s breakfast on Sunday. Lunch was a buffet of roast beef and turkey with numerous salads, ending with cookies and brownies for dessert.

Editor’s note: Many more Safety at Sea courses and other sailing-related seminars dot the West Coast schedule during the next couple of months. We’ll post a healthy list of them in a ‘Lectronic Latitude next week, and you’ll find also find them in the Non-Race Calendar section of the February Latitude 38, coming out on Friday.

SHARE ON Tweet Share Email Linkedln
Leave a comment
Receive emails when 'Lectronic Latitude is updated. SUBSCRIBE
'Lectronic Latitude: Monday, Jan 27
Three Bridge Fiasco
The Craziest Fiasco Yet
While straining to see anything in gray nothingness, a skipper who has 20+ years of Three Bridge Fiascos under his keel commented: "This is the craziest Fiasco ever!"
When you drop everything . . .
Diary of a Schooner Charter Cook, Part 3
On Saturday, January 4th, I watched as Seaward’s crew brought their vessel neatly to the dock at the Newport Sea Scout base in Southern California.
Sponsored Post
South Beach Yacht Club 2020 Race Season
South Beach YC offers some of Northern California's finest year-round racing, including our mid-winter and summer race series, regional races, and select regattas.
Names that make you laugh
Every Class Has at Least One Clown
Boat names, along with boat design, have evolved in a more radical direction.
More 'Lectronics »
Report Listing