One of our favorite singlehanders is on a whirlwind West Coast tour — but not by boat.

“The reason for being in the Bay Area was an invitation to Cruising Club of America’s awards dinner on Wednesday [December 4] evening, where I was presented with their special recognition award for my fourth circumnavigation,” Socrates wrote us in an email. “I was told you can’t receive the Blue Water medal more than once.

Socrates’ visit brought her face to face with a veritable who’s who of West Coast sailing talent. “It was great to catch up with Stan and Sally Honey over dinner, as well as meeting up with a lot of other welcoming people during my stay — including Cree Partridge, Jim Antrim and others at the Berkeley Marine Center over Friday [December 6] lunch time.”

After her Bay Area jaunt, Socrates headed south, continuing her tour of notable names. “Now back in Mexico (La Cruz de Huanacaxtle), where I met up with Richard Spindler and Doña last week before I flew out of Puerto Vallarta. They invited me to sail with them next week on Profligate in the Banderas Bay Bash, but I need to get down to writing — so likely have to restrain myself to just one day of sailing enjoyment!

Richard Schaper, a CCA member and owner of the Catalina 36 Ebenezer III, was in attendance at the ceremony at St. Francis, and told us this of Socrates: “I admire her so much. I tracked her and read her live blog [on Socrates’ last circumnavigation]. It’s amazing how she kept her mental balance. She lost her electricity. She lost her auto pilot. She was without a mainsail in the Southern Ocean for three months. It’s very English, I supposed.” 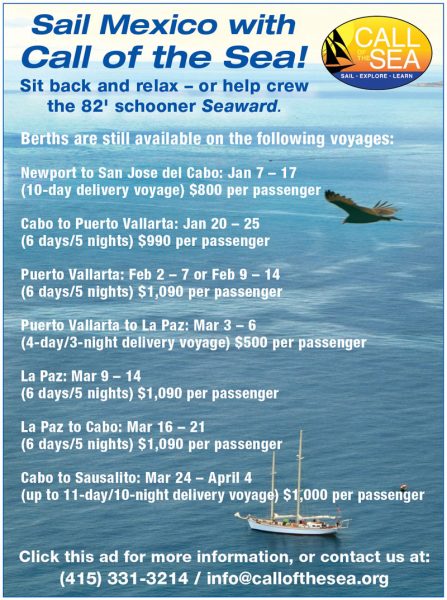 In the mid-’70s, renowned yacht designer Ron Holland drew up a 40-footer for Belvedere sailor Dave Allen. Holland’s then-brother-in-law Gary Carlin built her in 1976 in Florida. Originally from New Zealand, Holland had spent some time in the Bay Area during the mischievous late 1960s and worked for Gary Mull before moving to Ireland. The boat, built as light as possible and designed with a wider stern than was popular at the time, proved wickedly fast. Dave Allen named her Imp. He brought her to Europe with a young crew from California, and soon she began racking up the results. In her debut season she won the 1977 Fastnet Race overall, the Admiral’s Cup, SORC and even her division in the all-IOR St. Francis Big Boat Series.

In the disastrous 1979 Fastnet, with communications not so fully evolved as they are today, Imp was presumed among the boats lost to a deadly storm. Instead, she actually finished the race.

After 1979, Imp remained in Europe and passed through the hands of various owners. George Radley Jr. of Cobh, County Cork, has owned her since the ’90s. He’s shipping her from England to his own private boatyard in Cork Harbour on the south coast of Ireland. He plans a major refit followed by participation in next year’s Royal Cork Yacht Club Tricentenary. (“Tricentenary” is another word for tricentennial. For perspective, the oldest yacht club in California, San Francisco YC, is exactly half that age.)

“As Imp’s skipper during Dave Allen’s ownership, I am thrilled she’ll be undergoing a well-earned major refit and be present for Royal Cork Yacht Club’s tercentenary,” writes Skip Allan of Capitola. “Imp was and is special in all respects. A wonderful owner, a dedicated and seaworthy crew, fast design and solid build. Long live Imp!”

For more about Imp from the Irish point of view, read WM Nixon’s story in Afloat. We also recommend Bill Barton’s 2010 book, The Legend of Imp and Ron Holland’s memoir, All the Oceans, published last year — they’d both make great holiday gifts. 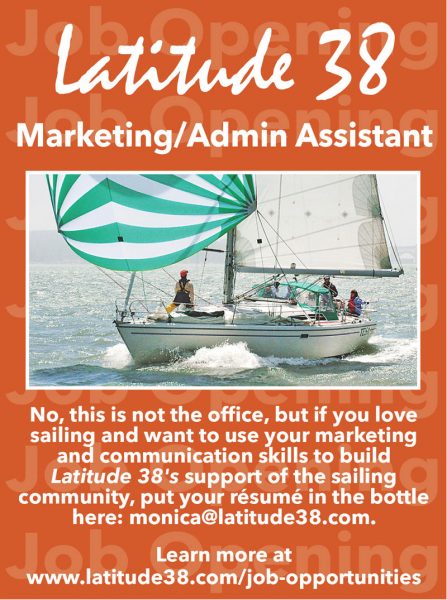 SHARE ON Tweet Share Email Linkedln
Leave a comment
Receive emails when 'Lectronic Latitude is updated. SUBSCRIBE
'Lectronic Latitude: Monday, Dec 9
Photos of the Day
West Coast Engulfed in Rain and Wind
Be careful what you wish for. After our praying — and in some cases begging — for rain in California this fall, the gods have answered. And they're still answering.
License to Sail
More Sailing License Plates from Around Latitude Nation
After our last round of License to Sail, we have gotten an avalanche of motor-bound, metal-plated nautical quips.
Sponsored Post
Workaholics Adrift by Judy McCandless
Workaholics Adrift: A gift to thrill any sailor or traveler. A life-changing sailing adventure.
Sailing Records and Racing
Sprindrift’s Record Attempt Fizzles
Less than 24 hours after crossing the starting line, maxi-trimaran Spindrift 2 had to abandon her fourth attempt at breaking the Trophée Jules Verne record for fastest outright circumnavigation of the globe.
Gifts for Sailors
Holiday Shopping for Your Crew at the Latitude 38 Store
Visit the Latitude 38 online store for great holiday gift ideas for sailors.
More 'Lectronics »
Report Listing