“Woke up this morning to find that the Cabo airport was closed last night at about 6 p.m., and the Port of Cabo is still closed,” the Grand Poobah wrote on his Facebook page this morning. “Lots of Ha-Ha boats are chomping on the bit to get out there and ride the sub 20-knot winds north to La Paz. Ha-Ha folks who have been in Mag[delena] Bay since Wednesday looking at headwinds to get south right now. Situation looks much more promising this afternoon, and less rain.”

It is, without a doubt, the strangest end to the Baja Ha-Ha in 26 years, as tropical storm Raymond made a late-season appearance. “The US National Hurricane Center says the storm could still dump three to five inches of rain on southern parts of the Baja California Peninsula,” The Washington Post reported. “Baja California Sur state’s civil defense department warned of strong rains Sunday from the storm.”

But the Poobah said that “other than a couple of strong gusts on Friday night, the depression that followed TS Raymond was a non-wind event in Cabo proper. Lots of rain though. Profligate will be here for a couple more days, then head up to La Paz.

“Happy cruising season to all with our just-washed boats.”

And this one of an ill-equipped roof over a tortilla maker.

The Ha-Ha ‘officially’ ended on Saturday, “but the entire fleet remains ‘sheltered in place,'” the Poobah wrote. “The port of Cabo, for example, has been closed for 12 hours and will be closed until at least tomorrow. There are Ha-Ha boats that have been sheltered in place since Wednesday at Man ‘o War Cove in Mag Bay.  Probably going a little stir crazy up there. Other vessels have taken shelter at Puerto Los Cabos, either in berths or anchoring in the harbor. Others have gone on to La Paz.

“This is the first time in over 50 years a tropical depression has crossed the Ha-Ha course at this time of year. We’d prefer that it not happen again.”

Be sure to grab the December issue of Latitude 38 for a full Baja Ha-Ha recap. (Working title: The Ha-Ha Cap Cap.)

Tomorrow, Alameda’s City Council will consider giving the developer of Alameda Marina an extension for the terms of its lease with several businesses. Advocates (such as ourselves) of a working waterfront, complete with sailmakers, riggers and a boatyard, are encouraged to attend the meeting to voice their support.

After delays, construction at the new Alameda Marina is about to proceed on a tight schedule, according to harbormaster Paul Houtz. Several businesses on the property have been given notice to move — in some cases to temporary facilities. Other businesses face an uncertain future. Members of Save Alameda’s Working Waterfront, or SAWW, see this as an opportunity for the council to facilitate the current tenants’ direct move into their new permanent spaces, rather than being asked to move out of their old spaces first.

“It is also an opportunity to press the council to require the developer to intensify its effort to find and establish a business relationship with a boatyard operator so that we are assured that the developer remains focused on building the boatyard,” read a November 3 email from SAWW. “[We] request that as many sailors as possible, once again, attend this upcoming council meeting to pressure the developer to build a boatyard in Alameda Marina and to preserve the current businesses at that location. It also goes without saying; the developer should be required to keep tenant lease rates realistic in order to allow maritime businesses to flourish at the Alameda Marina.”

The meeting will be held at 7:00 p.m. at council chambers on the third floor of Alameda City Hall, 2263 Santa Clara Avenue in Alameda. 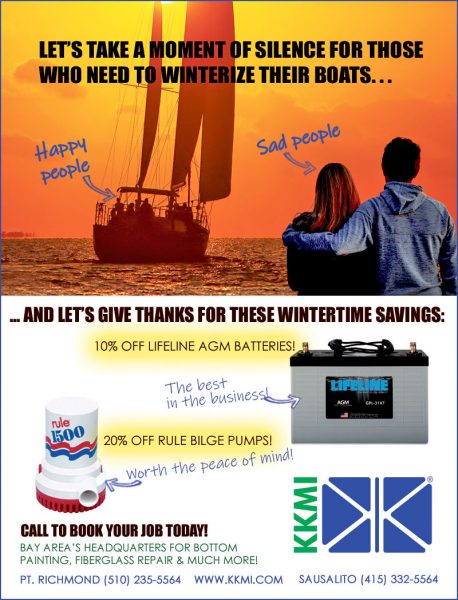 Vikas called it “thick fog but have seen worse.”

“A nice day as the fog burned off — although being in fog is cool too.” Vikas had a 10-year-old on board and gave him the wheel. “I told him it’s ‘just like driving a car…'”

Yesterday on Scuttlebutt, Craig Leweck expressed his reservations about reporting on the America’s Cup.

I was at a dinner party recently when asked for an America’s Cup update. I stumbled through a response, feeling like the information failed to tantalize, but truth is there is not much tangible information to share.

With the launch of four AC75s, we have learned they do sail, which I guess is noteworthy. When the concept was revealed, it was otherworldly, so proof of concept is a headline. And as each of the four teams presented different approaches to the Rule, it either confirmed there are four ways to skin a cat, or three ways to do it wrong. That reveal will come later.

What my response dwelled mostly on was the fifth team, Stars + Stripes Team USA, whose greatest accomplishment thus far is that I am still talking about them. Among the late entries, they remain, while two others — Malta Altus Challenge (MLT) and DutchSail (NED) — have withdrawn.

But much like the 2020 USA presidential candidates for the Democratic Party, it is one thing to launch a campaign but quite another to follow through with it.

Is Stars + Stripes Team USA on life support? Hard to know . . . they don’t like answering that question, nor will the Defender or Challenger of Record offer an update. The decision by the Arbitration Panel in March 2019 certainly resuscitated them, but if the goal is to win the America’s Cup, it’s hard to see a pulse.

In the absence of another lifesaving act by the event administration, the first America’s Cup World Series (ACWS) regatta of the 36th America’s Cup cycle, to take place April 23-26, 2020, in Cagliari, Sardinia, should be a put-up-or-shut-up moment . . .

SHARE ON Tweet Share Email
Leave a comment
Receive emails when 'Lectronic Latitude is updated. SUBSCRIBE
'Lectronic Latitude: Friday, Nov 15
Baja Ha-Ha Close to Cabo and a Raucous Conclusion
It’s amazing how fast the Baja Ha-Ha comes and goes every year. One of the largest cruisers’ rallies in the world is heading toward its inevitable and famously boisterous conclusion at the pointy end of Baja California.
Mariners in Distress
Coast Guard Rescues Man on Homemade Sailboat Off SoCal
Yesterday, the Coast Guard towed a singlehander into port in Southern California after a five-month crossing from Japan in a homemade vessel.
Sponsored Post
Special Pricing at Wayfarer Marina
Brand new docks in Marina del Rey at Wayfarer Marina.
Bay Area Boats
Did You Ever Sail on the Marin-Based Ship ‘Active’?
Tucked into the bitter end of the San Rafael Canal is what we can only call an unexpected vessel — a pirate-y looking tall ship that’s  a tad out of place against the back alley of the busy Montecito Plaza.
Events This Weekend
YRA Awards and OYC Open House
Although it's looking like a fabulous weekend to go sailing at latitude 38° N, we've got a couple of indoors events you might like to attend.
Deadline Is Today
Last Call for Classy Classifieds
Last call for Classy Classifieds. To get your ad into the December issue, the deadline is today, the 15th, at 5 p.m.
More 'Lectronics »