Excellent conditions made for a quick Delta Ditch Run on Saturday, June 1. A flood current and consistent breeze in the teens carried most of the sailors to Stockton with plenty of time left to party. The 29th edition of the 65-mile race from Richmond to Stockton garnered 109 starters, including 16 Cruising Division entries. The cruisers got a two-hour head start off the Richmond Yacht Club breakwater; the rest started downwind off a line set up between the Richmond-San Rafael Bridge and the Brothers Islands.

Some unusual wind angles in the first half of the race kept crews on their toes, as did the puffy headstay reach through the ‘S curves’ on the San Joaquin River past Isleton. In the pack we traveled with, no one dropped their spinnakers in this stretch, but round-ups were plentiful.

The first boat to finish was no surprise. Peter Stoneberg’s Extreme 40 Shadow X reached Stockton Sailing Club at 3:37 p.m. The first monohull to finish was Dan Alvarez’s JS9000 JetStream (known to its frenemies as “Death Spear”), at 5:14 p.m.

Express 27s and Moore 24s stayed together in two big clumps, vying for position as the San Joaquin narrowed, levee walls closing in. But two pulled away from the packs: Brendan Busch’s Express 27 Get Happy!! (production hull #1); and Bill Erkelens’ Moore 24 Flying Circus. The latter won overall monohull on corrected time. Flying Circus finished at 6:32 p.m., for a corrected time of 7 hours, 16 minutes.

Dave Gruver’s Olson 25 Sketch was originally listed as second overall. But, PRO Jim Hachman wrote to us on Wednesday to make this correction: “We had two cases where boats with the same sail numbers were initially scored with incorrect finish times.” The Olson 25 had the same sail number as Moore 24 #76. “The finish time for the Olson 25 #76, Sketch, changed by about 16 minutes. They still won division Heavy 3, but dropped many positions in the overall scoring.” That moves the Moore 24 Pegasus Racing into the second-place overall spot. The top four boats were all Moore 24s; JetStream was fifth.

We’ll have more in the July issue of Latitude 38, including the tale of Mike, Ben and the boys on the SSC-based Olson 40 Dogma, who sailed 830 miles in eight days in order to make it to the start of the Ditch Run after competing in the Spinnaker Cup and Coastal Cup.

After nearly 250 days at sea and 31,000 continuous, nonstop miles — including a lap around the Southern Ocean and one and a half times around the world — Randall Reeves has made his first stop of the Figure 8 Voyage 2.0 in Halifax, Nova Scotia. 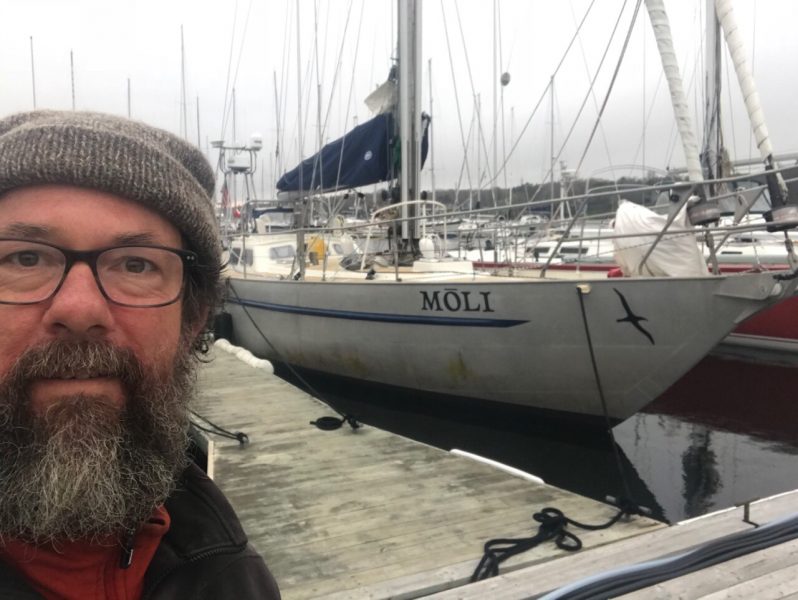 Reeves had originally been shooting for St. John’s, Newfoundland, but was forced into Halifax for a number of reasons. “It’s closer,” Reeves said on his blog. “Over the last week Mo has lost her windvane and primary headsail (my two best friends); winds have been strongly contrary or light since I can recall, we’re low on fuel, and the east coast of Newfoundland is experiencing a record iceberg year.

Reeves said the icebergs caught him off guard, and said there are currently between 20 and 70 icebergs per square degree floating around the southern entrance to the Labrador Sea. “Imagine icebergs, gale force northerly, fog — a very likely scenario. I need a plan for that.”

Reeves plans to be in Halifax for up to a week. “As fortune would have it, Halifax (Lunenberg) has sailmakers and St. John’s does not.”

The passage up the Atlantic was slow going through the tropics, before Reeves arrived in the still-active, not-quite-summer north. “The North Atlantic low-pressure systems have taught us a couple of lessons, and unfortunately they have bruised us a bit.” During a gale last week, Reeves had deployed his Jordan series drogue when it apparently fouled on his windvane. He has been on his electronic autopilot ever since.

The damage to his headsail came days later, during a another gale, though this one much smaller in size. “I came on deck at 2 a.m. to tack and noticed a strange shadow cast by my headlamp onto the #2 genoa,” Reeves posted on May 29. “On closer inspection, the shadow resolved into a long tear in the sail from the protective cover at the foot all the way through two panels. In the day was due a gale, so I hustled the sail down on deck, jammed it into a bag and hustled the spare into the sky, all before dawn. Winds were 15 knots from the south by the time I was done and 30 before noon. All in all, I was lucky the sail didn’t blow entirely and that I could exchange it during a gentle phase.”

Reeves said that he’s only in Halifax to accomplish a few jobs,  reprovision a bit, “and maybe have a beer,” Reeves said on a video. “I haven’t had a beer, ah, in so long. Looking forward to a beer.” After finishing up in Halifax, he still has his eyes set on St. John’s. “Because my lovely wife meets me there in the middle of the month, and there is just no way I’m not getting to St. John’s in time to see my lovely wife.”

Of the Northwest Passage, Reeves said “It’s been some difficult years up there. There is no guarantee at all that we’ll get through. But I want to get there on time at least, and give ourselves a really good chance of making it.” Reeves called the Northwest Passage “the first big hurdle; about 5,000 miles of difficult piloting.” The next hurdle, he said would be the final passage through the Bering Sea and Gulf of Alaska in the fall, at the beginning of the stormy season.

Reeves said he hopes to be home for Thanksgiving. 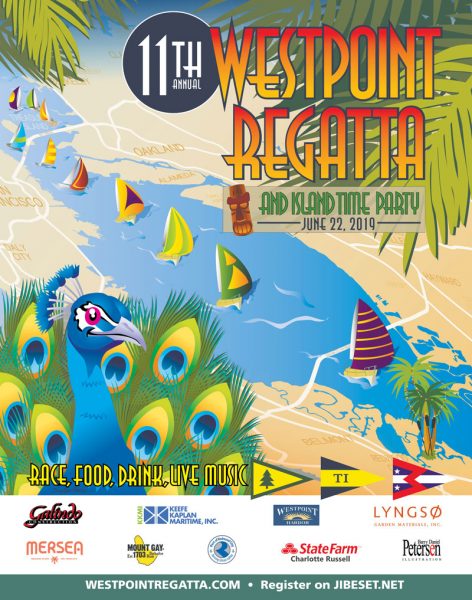 One of the great things about winning the first edition of any new offshore race is, if you’re first to finish, you also set the new course record. This was the case for Peter Cunningham and his crew aboard Powerplay as they led the way down the California coast in the first-ever CA 500 from San Francisco to San Diego. The Powerplay team led out the Gate with Argo and Maserati close behind, but it was Argo and Powerplay battling for the lead most of the way, with Powerplay slipping ahead in the end.

After the finish, Cunningham said, “The race was a blast! Lots of collisions with mysterious floating items on the course. We lost the use of our large rudder; both Maserati and Argo had damage to rudders. Our fastest speed was 40 knots when I was asleep. It was a tight race with Argo, but, fortunately, we made a great tactical decision at the turning mark into San Diego that let us hold what remained of the wind until the finish.” Maserati’s rudders took three separate hits, which appeared to slow them down and keep them off the pace.

The approximately 500-mile race was looking like it would finish in under 24 hours, but the wind went light for the final miles into San Diego (a real shocker for San Diego . . . just kidding). Despite the closing light-air miles, the winning elapsed time and new course record was 29 hours, 2 minutes and 29 seconds, for an average speed of about 17 knots. Ninety percent of the event was a high-speed drag race, where keeping the throttle down, minimizing mistakes and avoiding collisions were keys to success. Then, near the turning mark into San Diego when the wind went light, choosing wind angles, making tactical decisions, and nurturing a few knots out of the breeze that existed are what made the difference.

The new CA 500 was added to the growing, revitalized California Offshore Race Week, which this year included the Spinnaker Cup, the Coastal Cup, the Santa Barbara In-Port Race, the SoCal 300 and the CA 500. Participation in offshore racing has been in decline for many years, but the renewed efforts and collaboration between the clubs appear to be restoring energy and excitement to racing along the California coast. We’d love to see the trend continue.

Next up for the MOD70s will be the Transpac, where they’ll join another offshore success story: the huge anniversary fleet of about 100 boats in the 50th running of this California classic.

If variety is the spice, then the fifth annual Race To Alaska — the first segment of which started today — is a veritable jambalaya of waterborne fun. With the only rules being “no motor, no support,” pretty much anything that floats and can be motivated by wind or muscle power is going, including modern sailboats, an ancient sailboat (a 52-ft, 12-ton gaffer built in 1903), a variety of rowing craft, two stand-up paddleboards, and a “self-designed boat made from Hobie parts.”

If they all made it, 46 teams answered the starting gun at 5:00 this morning. The first short leg takes the fleet from Port Townsend, 40 miles across the Strait of Juan de Fuca to Victoria. The main action starts at high noon on Thursday. From Victoria, the next stop is Ketchikan, 710 miles up the Inland Passage, where the winds are as variable as string theory, and the currents make San Francisco Bay look like a still-life painting.

The teams with the best chance of actually winning the $10,000 first prize are on sailboats, all of which have been fitted with some sort of manual propulsion, be it rowing stations, paddles, pedal-driven propellers or, for all we know, swimming ahead of the boat with a rope in your teeth.

Most racers hail from the Pacific Northwest — Canada or Washington — but this year there are also entries from Pennsylvania, South Carolina, Wisconsin, Idaho, New York, Tennessee, Maine, Australia and the Netherlands.

For the first three years of the R2AK, multihulls won. The course record of 3 days, 20 hours, set in 2016, is still held by one. Last year, a monohull won. The all-woman Team Sail Like a Girl kicked everyone’s butts sail/pedaling their Bainbridge Island-based Melges 32. They are back this year to see if they can make it a two-fer. There are also three entries from the Bay Area with a decent chance at a win: Team Shut Up and Drive (Beneteau 33, San Francisco), Team Givin’ the Horns (Corsair F31, Goleta [near Santa Barbara]) and Team High Sea Drifters (Olson 30, San Rafael).

The second-place prize is a set of steak knives. Really. But they’re nice steak knives. Everyone else has to settle for surviving.

We’ll be posting ‘Lectronic Latitude updates on the R2AK as it progresses. In the meantime, check out the lead Sightings article in the June issue, and/or the race website itself, www.r2ak.com. 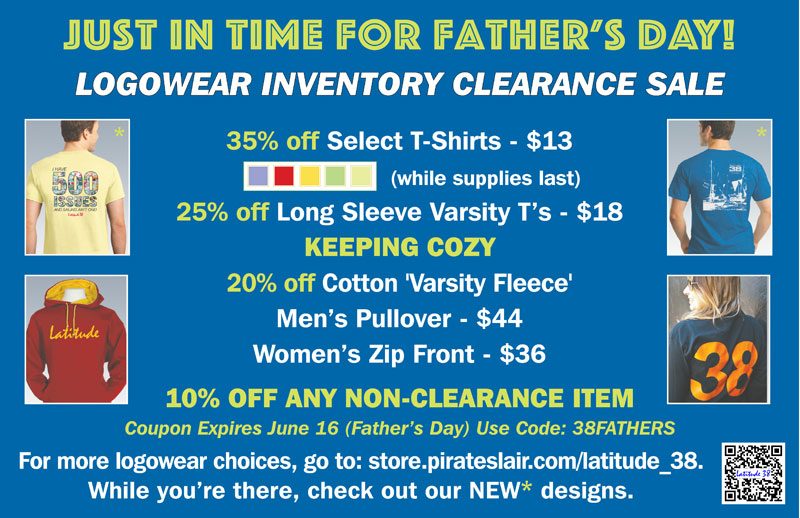 SHARE ON Tweet Share Email Linkedln
Leave a comment
Receive emails when 'Lectronic Latitude is updated. SUBSCRIBE
'Lectronic Latitude: Friday, May 31
Sailors Rescued
Transpac Entry Loses Keel
No one would have expected one of the Southern Hemisphere’s best-known and most-traveled yachts to be lost at sea en route to the start, but that’s exactly what happened to Brian Petersen’s Auckland, New Zealand-based Elliott 50 Ran Tan II.
California Offshore Race Week
70-ft Trimarans Fly South
They're off. And they're almost there (or already finished, by the time you read this). Three 70-ft trimarans made a brief appearance on San Francisco Bay as they tuned up and got ready to blast down the coast in the inaugural California 500 race from San Francisco to San Diego.
Buy or Sell Marine Gear
Salty Swap Meet at Alameda Marina
Buy, sell, trade your used or new marine equipment, supplies, rigging, boating gear and anything & everything marine.
Hot Off the Presses
The June Issue Is Out Today
Happy June, Latitude Nation. We are celebrating the more-or-less start of summer with nothing less than a brand-new issue of Latitude 38.
Conditions for Tomorrow
Delta Ditch Run Forecast
Weather Routing Inc. predicts a "good day" for tomorrow's Delta Ditch Run from Richmond to Stockton.
More 'Lectronics »
Report Listing