Any workable breeze failed to show up for the Corinthian Midwinters on pleasant Saturday, January 19, and the race committee was never able to come out of postponement. But Sunday the 20th was just the opposite. A low-pressure system blowing through the San Francisco Bay Area carried with it gusts up to 30+ knots from the northwest.

Photographer and race committee volunteer Roxanne Fairbairn was well situated on the signal boat to capture the excitement on the start-finish line. You can see more of Roxanne’s excellent photos on her SmugMug site.

Look for our race report and a few more photos in Racing Sheet in the February issue of Latitude 38, coming out on Friday, February 1.

On Monday, we wrote at length about this Saturday’s Three Bridge Fiasco — one of the largest races in the country. Since Monday, entries have gone from 230 to 296 and counting. Today (Wednesday the 23rd) is the deadline (at 11:59 PST). If you’re sitting on the tideline wondering which way to go, now’s the time to decide. You can register here.

Tomorrow (Thursday, January 24) in Mill Valley between 3 and 6 p.m., there will be a collection for Coast Guard families at the Southern Marin Fire Protection District.

Still on the Job

On Saturday, a 21-ft boat ran aground in the notoriously (but deceivingly) shallow waters of Suisun Bay, according to a Coast Guard press release. It is not clear if the vessel was a sail- or motorboat — but it began taking on water. There were two people onboard.

As with so many groundings in Suisun Bay, rescue boats could not reach the stranded vessel due to the shallow depth of the water. The Coast Guard helicopter lowered the rescue swimmer and they eventually hoisted both boaters to safety. They were then flown to Buchanan Field Airport in Concord and were reported in good condition.

The helicopter’s pilot, Lt. Samuel Hafensteiner, said that the crew performed exceptionally well. “With practiced precision, [we] executed a difficult, 80-foot hoist from a 21-foot boat to successfully rescue these two individuals.”

We’ve heard very little from the Coast Guard themselves about the shutdown, until this press release:

“The Coast Guard continues operations authorized by law that provide for national security or that protect life and property during partial government shutdowns; however, there are some impacts to our day-to-day operations. The Coast Guard stops or curtails mission activities that do not fall into those categories. Coast Guard uniformed personnel will continue to perform their duties during a partial government shutdown and will provide essential services such as search and rescue, port and homeland safety and security, law enforcement and environmental response.”

At least someone is doing their job.

An End in Sight? Probably Not

Tomorrow, the Senate will hold competing votes on two measures: One vote will focus on “President Trump’s proposal to spend $5.7 billion on a border wall,” according to the New York Times. The other vote is over a “Democratic bill that would fund the government through Feb. 8 without a wall.” But neither measure is expected to pass, according to the Times. “The procedural move by Senators Mitch McConnell of Kentucky, the majority leader, and Chuck Schumer of New York, the Democratic leader, is the first time the parties have agreed to do virtually anything since the shutdown began Dec. 22.”

Friday will mark the second time this month that some 800,000 federal workers — including the Coast Guard — have gone without a paycheck, assuming a bill isn’t passed tomorrow.

It’s not clear what progress has been made with the “Pay Our Coast Guard Act.” Though it’s received wide bipartisan support, there’s no indication that the bill is moving through Congress.

It’s not as random as lightning striking twice, but it feels almost as close. Over the past year, we’ve slipped a handful of flyers into some random magazines that are distributed to our more than 700 locations up and down the West Coast. If you happen to be the one who picks up a magazine with a flyer, congratulations! You win a T-shirt. Pretty simple.

Here’s the weird part. We received an email from Phil Jay, who’d picked up a magazine at the King Harbor Yacht Club in Redondo Beach with the Golden Ticket inside — but his brother, Lenny Jay, was also a winner, finding the flyer in the same December issue which Lenny had picked up at the Golden Gate Yacht Club. (We have to wonder, are these brothers working us?)

We asked for a little information from Phil, who replied, “Here’s the photo you requested with me in front of my Cal 39, Yankee Traveller. She’s a plastic classic, fast and strong, though I couldn’t go sailing today, no wind.”

Stranger things have happened, but we’re happy to discover that the Jay brothers still enjoy sailing in both Northern and Southern California. We just want to get the next photos of them out sailing with their new Latitude 38 T-shirts on. 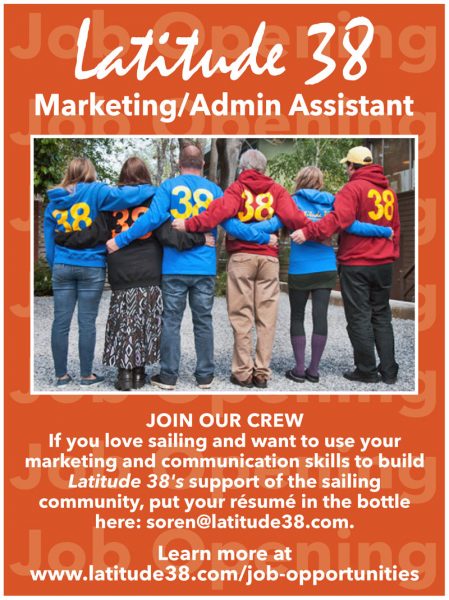 SHARE ON Tweet Share Email
Receive emails when 'Lectronic Latitude is updated. SUBSCRIBE
'Lectronic Latitude: Monday, Jan 21
Anchor-Outs
The Shores of Richardson Bay
Another unfortunate soul is in a tough spot after their trimaran came to rest on the west shore of Tiburon this weekend.
Shorthanded Pursuit Race
Three Bridge Fiasco Preview
The chatter at yacht clubs this past weekend inevitably turned to strategy for next Saturday's Three Bridge Fiasco. "Which way are you going to go?" is the question on the minds of the skippers (and doublehanded crewmembers) contemplating this crazy race.
Sponsored Post
Ad: Rigging Specials at KKMI
Jules Verne Trophy
New Record to the Equator
This morning at 07:45 UTC, Spindrift 2 broke her own record to the equator by just over an hour. The maxi-trimaran crossed the equator in 4 days, 19 hours, 57 minutes.
A Blast from the Past
One Hump or Two?
The sailing ships of old carried all sorts of cargos. But perhaps the most unusual shipment(s) ever carried by an American ship were loaded aboard 540-ton square-rigger USS Supply in the Mediterranean in the summer of 1855: camels.
More 'Lectronics »