Last week Florida reeled beneath the force of Hurricane Ian. Today, Mexico’s southwest is shoring up against heavy rains and strong winds in the wake of Hurricane Orlene. Weather forecasts on Sunday warned of Orlene’s escalation from a Category 1 to a Category 4 by the time it reached landfall. Fortunately, conditions changed and Orlene crossed the coast just north of the Nayarit-Sinaloa state border at 6:45 a.m. today (PT), as a Category 1 storm. At that time, NOAA reported, the maximum sustained winds were estimated to be 85 mph.

On Sunday, much of the state of Jalisco was in a state of alert with a hurricane warning effective from San Blas to Mazatlán. Authorities had closed seaports and set up shelters, and closed schools for Monday.

Amid the high winds and heavy rain, the affected regions are bracing for rising rivers and streams, flooding in low-lying areas, and possible mudslides.

We recognize that Orlene is nowhere near the intensity of Hurricane Ian, which devastated Florida last week, but we do hope everyone in Mexico is safe today. We checked in on some friends at Marina Riviera Nayarit – At la Cruz and were happy to learn they would escape the worst of the weather. Catalina Liana and her partner Mike Danielson of PV Sailing checked in with mariners and kept them informed via a VHF radio broadcast.

While the past week’s hurricanes have come late in the season, there’s no reason to assume we’ve seen the last of them. Are you familiar with the phrase “June too soon, October all over?” That’s been bandied around for years, but if you Google “When is the hurricane season?” the first thing you’ll see are the dates June 1 to November 30, though weather doesn’t always stick to the rules and keep the same calendar as humans. October has just begun and there are currently two weather systems under watch in the Atlantic. We hope the rest of the season is low-key and that those people already affected are able to see a quick and full recovery.

In his continuing quest to make sailing available to and more inclusive for more people, Christian Buhl’s California Inclusive Sailing (CIS) and the Lido Isle YC Junior Board hosted the 4th Annual “Inclusive Day on the Bay” on Sunday, September 25. Fifty-nine people dedicated their Sunday to help people sail on beautiful Newport Bay. Volunteers from the PIMCO Foundation sailed with Special Olympics athletes on a fleet of adaptive boats, each equipped with nets to catch floating debris.

A perfect Southern California breeze powered the boats and brought many smiles. CIS also conducted its first youth-inclusive tennis clinic. Christian Buhl, founder of California Inclusive Sailing, greeted everyone with a message: “With the right team, the right tools and at the right time, you can really make your dreams come true. So find your purpose and never stop dreaming, because today is the right time. Thank you, volunteers, for all you do to help others.” Buhl then presented Lido Isle Yacht Club Junior Board member Chase Decker with a 16-ft RS Venture adaptive sailboat and a mobility lift used to transfer people from their chair to a boat. With these tools and his team, Chase can start a comprehensive inclusive sail program for the local community.

After the rotation from the bay to the tennis court, a barbecue was enjoyed by all thanks to the Newport Beach Sunrise Rotary Club. California Inclusive Sailing is a grassroots volunteer-based charity that promotes inclusive outdoor recreation. The California Inclusive Sailing motto is, “Harness the wind, soak in the sunshine and lift your spirits.” CIS thanks PIMCO Foundation, Special Olympics athletes and their families, Sidecar Donuts, and the Lido Isle YC for hosting such a special day. 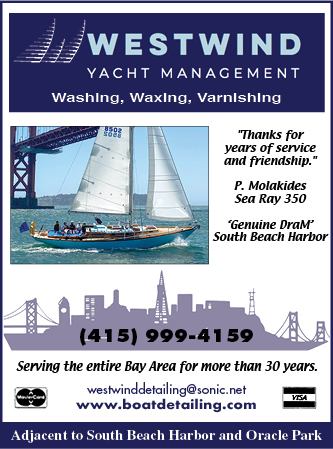 October is settling in, and a new issue of Latitude 38 has hit the dock, which means it is time to share another month’s worth of Sailagram submissions. Check out these great photos of our community last month, on and off the water. 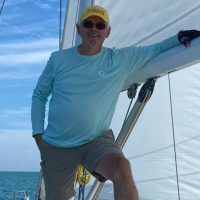 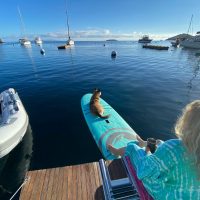 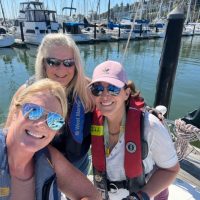 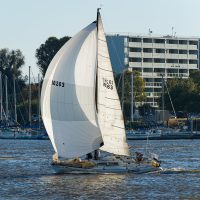 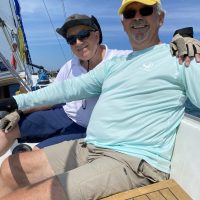 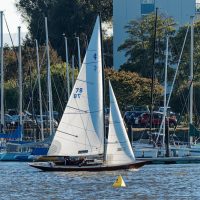 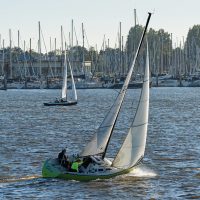 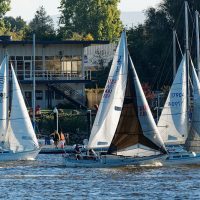 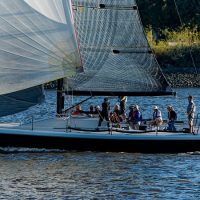 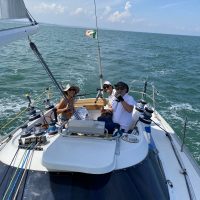 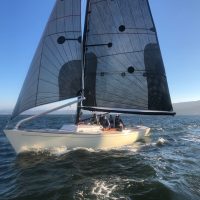 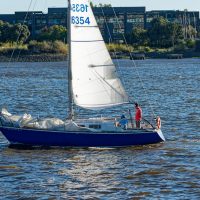 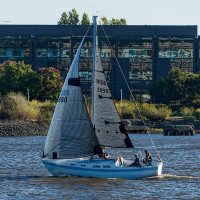 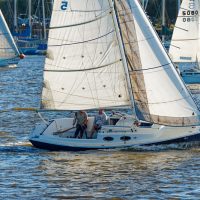 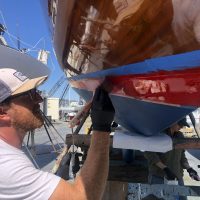 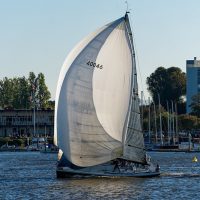 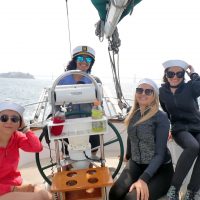 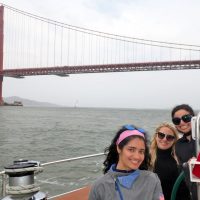 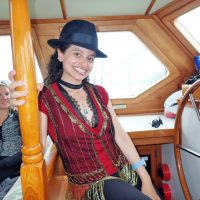 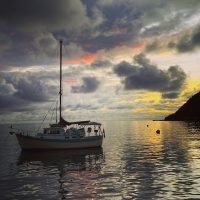 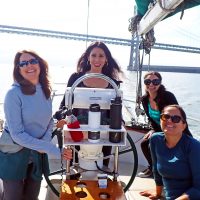 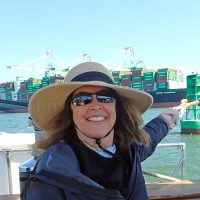 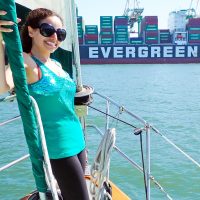 View Slideshow
1 2 ... 4 ►
Don’t miss out on being included in next month’s Sailagram! Send your sailing photos to [email protected].
SHARE ON Tweet Share Email Linkedln
4 Comments

Sailing on San Francisco Bay doesn’t always have to be heavy weather pounding into steep, teeth-jarring chop, white knuckles gripping the helm, hanging on for dear life in howling wind. Sometimes it can be simply lovely, gentle and easy. Case in point: this video, shot on Thursday, September 22, the first day of fall.

The boat is the J/120 Mary J. The 1990s design sails beautifully — and swiftly — whether racing, cruising or daysailing. Thanks to Steve Seal for sharing the video. “The small ship at about 5.5 minutes in on the video is the presidential yacht, the USS Potomac,” reports Steve. “She was FDR’s personal yacht from 1936 to 1945. A lot of history was made on the Potomac.” Earlier in the video, we can spot the wooden brigantine Matthew Turner. It seems to us that every time we go out on the Bay we see the new tall ship with sails unfurled, a fun and unmistakable sighting.

There are times when we’re reminded that many people are far better than we are at planning ahead. This is one of those times. The end of the year is approaching, and suddenly we start seeing a lot of subscription renewals. Many people give Latitude 38 subscriptions as holiday gifts. The renewal reminders go out early enough so people who actually plan ahead have time to renew their gift before they miss an issue.

If you’d like to surprise and excite a sailor by having a hot-off-the-press issue of Latitude 38 delivered to them, you can hit our subscription page here and get it done. You’ll be way ahead of us in your holiday shopping.

SHARE ON Tweet Share Email Linkedln
Leave a comment
Receive emails when 'Lectronic Latitude is updated. SUBSCRIBE
'Lectronic Latitude: Friday, Sep 30
Extreme Impact in Florida
Hurricane Ian’s Coastal Catastrophe Amidst Improved Forecasting
The devastation from Hurricane Ian is still underway as it passes over Charleston, South Carolina. We hope to hear stories of miraculous luck and survival, but so far it looks as if boats and boating facilities took an enormous hit.
Women Teaching Women
Women’s Sailing Seminar Celebrates 30 Years
What happens to a yacht club when their landlord evicts them from their rented clubhouse and their members watch their former home get demolished?
Sponsored Post
Quality Yachts With Premium Service From Swiftsure Yachts
Quality Yachts With Premium Service From Swiftsure Yachts
A Month's Worth of Great Reads
Latitude 38’s October Magazine Is Out Today!
Along with all the best in sailing stories, this month we're giving readers the chance to win one of five Spracht BoneHead Sport headsets to celebrate the one-year anniversary of 'Good Jibes!'
Digging in For Stormy Weather
Good Anchors Help You Sleep Well at Night
What's your anchor setup to give you a good night's sleep? There are a lot of approaches to handle a wide variety of circumstances.
Sponsored Post
Don’t Miss the Treasure Island Sailing Center Yard Sale
The redevelopment of Treasure Island has required us to shrink the size of our site. Boats, trailers, dollies and other equipment have to go!
More 'Lectronics »
Report Listing