“On Saturday, March 6, we were sailing in the Corinthian Yacht Club Midwinter race, headed to the weather mark at Point Diablo,” reports Jim Diepenbrock, owner of the Swan 44 Wingman. “We passed under the Golden Gate and tacked onto the port-tack layline. The true wind was 15-17 knots, and seas were calm with a 3-ft swell. We were in the remnants of a flood.

“Three or four minutes into the port tack, I saw the headstay fall off to leeward and then saw the top third of the mast collapse. I heard nothing. Some of the crew report hearing a pop and might have seen a metal part fly through the air. The headstay was slack, the jib was in the water, and the backstay was slack and mostly overboard, but the rig remained supported by the running backstay.

“We immediately turned downwind and checked on the crew status. Thankfully all were onboard and uninjured. We attached the inner forestay and tightened the port running backstay to attempt to keep the rig standing. We wanted to lower the sails, but the halyards were jammed in the mast crease and would not release, nor could we pull the sails down. We could not find a safe way to climb to the unsupported top of the mast and cut the halyards. Also, consider that the top 15 feet of mast was bent in half and hanging off to starboard over the water.

“We retrieved the angle grinder with a cutaway blade in case we needed to cut the shrouds. There was 15 feet of slack in the backstays and we could not get the sails down, so we prepared for the possibility of a total rig failure.”

“Given no alternative, we checked for lines overboard and motorsailed to a dock in Sausalito,” continues Jim. “Once docked, we again tried to find a safe way to scale the mast, and determined it was time to call Ken Keefe at KKMI. Ken and his crane operators met us at KKMI, and we were able to release the halyards and lower the sails. The cause of the mast failure is unknown but will be determined when we get the mast out of the boat.”

Jim shared his analysis of the incident with us. “What we got right: The entire rig had been removed and inspected, and all standing and running rigging replaced five months before the accident. We were prepared to cut the rig away from the boat with a grinder and a stack of cutaway blades. The crew was calm and efficient in spite of the circumstances. Before starting the motor, we did an exhaustive check to make sure no halyards, sheets or shrouds would foul the propeller.

“What we will consider: We were lucky not to be mid-ocean or in 30 knots of wind. I don’t know how we could lower the jib and a full batten mainsail without getting to the masthead to cut the halyard — this needs to be solved. Cutting the mast slides from the sail would have made matters worse as the top 1/3 would still be attached. The same is true of the jib. Perhaps your readers will have an answer?” Readers can enter a comment below.

Jim gave us a call and said that the rigging company’s insurer, GEICO, is stepping up to pay the insurance claim, without further investigation into the cause of the rig failure. It appears to Jim, however, that the spreader cap came off, causing the shroud to come out of the spreader. Along with so much else, the spreader cap had been replaced last summer.

Offshore Spars is building Wingman a new carbon-fiber mast. It won’t be ready until August 1, so in the meantime, Jim says, “I have an 8-knot powerboat!”

Jim bought the 2001 Swan last July and spent about six months refitting everything. Wingman lives in Schoonmaker Point Marina; she’s the fourth Swan in Jim’s family. “Wingman will live to fight another day,” Jim told us.

While Latitude 38 is, at its core, a West Coast sailing magazine, our crew come from and travel to various places around the globe — as sailors are inclined to do — and sometimes they’re able to get a glimpse of the local sailing life. Our ‘Lectronic editor is spending a little time in Tasmania, Australia, and snapped a few pics from various locations in the island-state’s northwest.

First stop, Strahan (pronounced Strawn). The fishing village is situated on the banks of Macquarie Harbour, known to locals to be three times the size of Sydney Harbour (already an enormous body of water.) Here we met Terris, known as “the crappy old bastard under a hat,” but his mates call him Terry — a fellow who has lived in Strahan all his life and is a third-generation local.

Terry told us his boat had been built in South Australia in 1976, and although he doesn’t know its pedigree, his intention is to simply cruise it around the Harbour.

On the other side of the bay we spotted this sleek-looking beauty . .

… and in the middle of the harbor, a vessel that looked as if it had fought its way in through the notorious “Gates.”

Then, in suburban Burnie, we met John Martin, who had built this sturdy little sailing skiff in his shed — a 16-ft Swampscott dory, originating in the Boston (USA) area.

Later in the day, during a drive into Smithton on the Duck River, we were lured to the water’s edge by a pair of masts that made us believe we’d discovered a long-lost schooner.

We also met a sailor who, many years after spending almost a week tied up at Tiburon Yacht Club in 1972, spent several months circumnavigating the island of Tasmania — by all accounts, a voyage not designed for the faint-hearted. 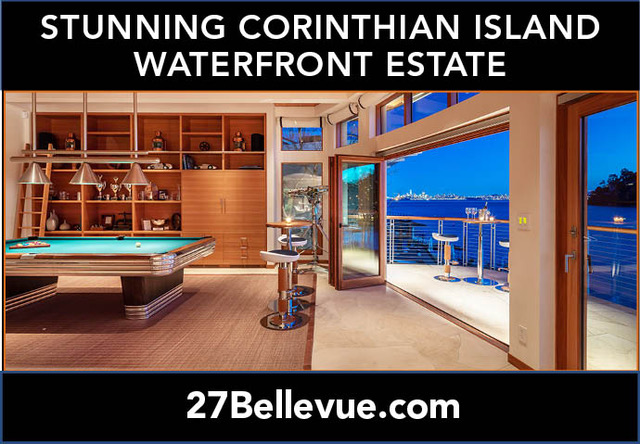 This exquisite waterfront on Belvedere’s Corinthian Island was custom designed and built in 2008 for a well-known yacht racer.

In March 2019, we reported on former Stanford sailing coach John Vandemoer’s being found guilty on one count of conspiracy to commit racketeering. His life was thrown into disarray when he was fired from his 11-year tenure as Stanford sailing’s head coach.

As we previously reported, Vandemoer, 41, had pleaded guilty to accepting bribes in exchange for recruiting two students to Stanford’s sailing team, even though they were not high-caliber athletes. Vandemoer is now preparing to release a book that tells the story of how he was “drawn unwittingly into a web of deceit.”

In his book, titled Rigged Justice, Vandemoer tells how he was used “as a stooge in a sophisticated scheme designed to take advantage of college coaches and play to the endless appetite for university fundraising — and wealthy parents looking for an edge for their college-bound children.

“The next year of his life was a Kafkaesque hellscape, and though he was an innocent man who never received a dime was the first person to be convicted in what became known as the Varsity Blues scandal.”

Rigged Justice is due to be released on September 28, 2021. You can read the overview from publisher Harper Collins Canada here.

While walking the docks of the California Yacht Club, we couldn’t help noticing the jewels adorning the noses of the many boats in their slips. They range from simple to elegant, to fast and efficient. We didn’t meet the owners but guess the bling on the bow is a reflection of the owner and how they like to sail. We’re sharing some of our observations below, starting with the simple.

There are dozens more variations on the theme, but from efficient sail handling to secure anchoring, a lot of important work gets done up there. We’d be happy to spend time sailing any one of these boats. 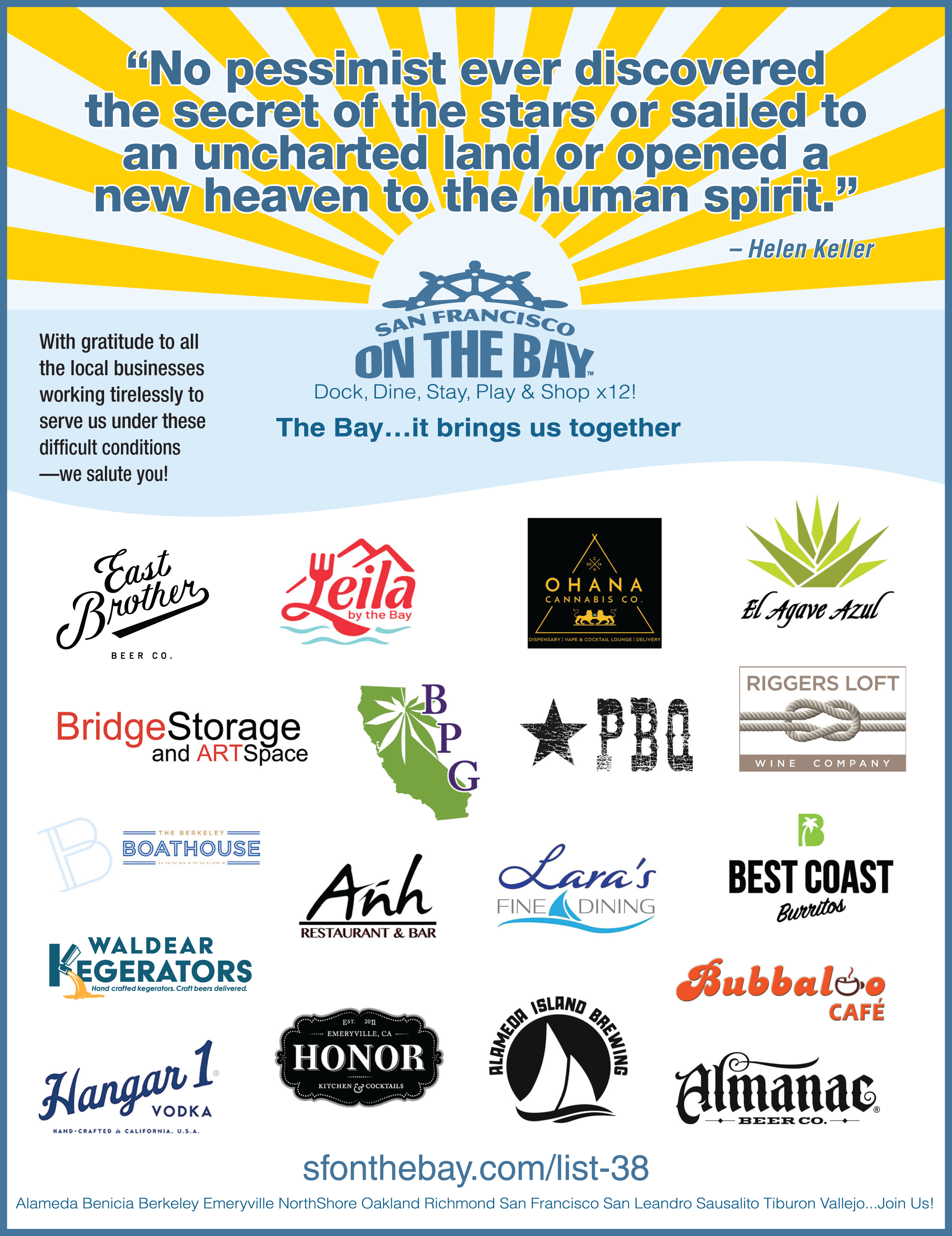 SHARE ON Tweet Share Email
Receive emails when 'Lectronic Latitude is updated. SUBSCRIBE
'Lectronic Latitude: Wednesday, Mar 24
Wet Wild Ride Down the Coast
Volvo 70 Pyewacket Smashes Newport to Cabo Record
Romping down the course from Newport Beach to Cabo San Lucas in less than two days, Roy P. Disney and his world-class crew on Pyewacket 70 have established a new monohull course record.
Bay Area Sailor Heads to Tokyo
Paul Cayard to Lead US Olympic Sailing Program
US Sailing has announced Bay Area sailor Paul Cayard as the new Executive Director of the US Olympic Sailing program.
Sponsored Post
Compass Realty: Corinthian Island
This exquisite waterfront on Belvedere's Corinthian Island was custom designed and built in 2008 for a well-known yacht racer.
Talking About Women Sailors
More Inspirational Women Sailors
A couple of readers have since responded to the story and told us about the female sailor who inspired them — unsurprisingly, both are Bay Area sailors.
Getting Ready for Summer Sailing
Get Your Boat’s VHF Radio Ready for the Season
In an emergency, VHF is the only thing that can directly connect you to the US Coast Guard’s Rescue 21 system, giving you access to high-tech emergency response and Digital Selective Calling (DSC) capabilities.
Sponsored Post
San Francisco on the Bay: Dock, Dine, Stay, Play
Discover San Francisco Bay and all that inspires those of us who live or visit here.
More 'Lectronics »
Report Listing