Back in the late ’80s, we challenged ourselves by racing in the then-active J/29 fleet as skippers of John Marsh and Andy Paul’s J’Ouvert Mornin. One of our most exciting and fun competitors was Peter Cunningham aboard his J/29 PowerPlay. (A member of his talented crew, Bill Dana, is the current St. Francis Yacht Club commodore.)

Peter moved away from the Bay Area to the Cayman Islands years ago, but he never moved away from competitive sailing. In fact, he’s taken it to a whole new level. Peter was back in the Bay Area for California Offshore Race Week and then the Transpac in 2019, aboard his MOD70 — also named PowerPlay. While he was in the Bay Area we got a very fast ride around the Bay, but he  generously took out lots of junior sailors as well.

Beyond challenging the world in competitive oceangoing trimarans, Peter remains a strong force in one-design racing. We spotted his name in the results of the recent Bacardi Cup, in which he came seventh in the J/70 fleet. We emailed him to say congratulations, and Peter replied, “That was just our second race with the new team and the first with any wind.” Clearly, they’re going to be a force to reckon with when they take part in the J/70 Worlds coming up at California Yacht Club in Marina del Rey this August.

Meanwhile, he updated us on his MOD70 plans, saying, “Now in UK on the Solent with the MOD70 to try for some records, as nothing much else seems to be happening. We hope to be the first to go ’round Isle of Wight in under 2 hours. We went out for a training spin on Monday and hit 38.2 knots — blew out all the cobwebs! Hope all is well at L38; I still read it.” Wikipedia shows the current record as 2 h 22 m 23 s, set in 2017 by the MOD70 Concise 10.

Peter Cunningham was both fun and impressive on San Francisco Bay in the ’80s and continues to be so today.

There is a tangible sense of history when you’re on a boat passing by the remains of a citadel, or having an anchorage to yourself under ancient fortifications. These sights and the history they represent are found all around the Mediterranean, and really are one of the main attractions for cruising here. Others include warm, clear water; tranquil to vigorous sailing conditions; and access to multiple countries with their people and unique cultures. Here are a few highlights from our last three seasons in the Med. In 2017, after enjoying the popular Porquerolles, a group of islands close to Toulon, France, we left the anchorage at oh-dark-hundred and enjoyed several hours of great sailing to the rugged island of Corsica. It was an auspicious moment when we passed under the massive citadel walls that had withstood the ravages of time and man for centuries. It evoked a feeling that our lives were very transient and insignificant. Then we rounded the bend into the bay and into the incongruity of superyachts, jet skis, kiteboards, tour boats, hotels and beach clubs. Welcome to the Med!

In the Mediterranean there are so many destinations in close proximity that you can change your plans as needed and still be very happy. Two years ago we were transiting the Strait of Messina en route to Montenegro for the winter. It was very exciting passing by Charybdis and Scylla from Homer’s Odyssey fame. (The entertaining translations for these were “the sucker-down” and “the render.”) After transiting, we changed our minds and turned right instead of left. We ended up wintering the boat in Marina di Ragusa, Sicily, which had a wonderful cruising community. The change of plans also meant we needed an alternative to Montenegro for the VAT reset, and that’s how we ended up in Yasmin Hammamet in Tunisia, which was both a safe and an interesting place to be during the 2018 ‘Medicane.’

The Balearic Islands off the coast of Spain have a real ‘summer vacation’ vibe, and although we didn’t make it to Ibiza, where the party is said to be nonstop, we did get into the flow of tapas and dinner after 10:30 p.m. on Mallorca and Menorca.

Welcome to Bruntons Propellers. Whatever type of vessel you require a propeller for, you can be sure that Bruntons have the solution — not just any solution but exactly the right one. We are the one company in the world that designs and manufactures just about every type of propeller in regular use today.

In recent weeks we’ve been sharing information about youth sailing opportunities around the Bay. Today we’re sharing another great new piece of news — Spaulding Marine Center is now inviting youth from 18 years of age to apply for the first intake of Boatworks 101 apprenticeships.

Boatworks 101, which has been approved by the California Division of Apprenticeship Standards, will provide the opportunity for young people to embark upon a career in the maritime trades industry through a 15-month ‘learn while they earn’ program.

“We’re excited to be opening applications,” said Spaulding’s education director, Jay Grant. “The Bay Area marine industry has been in need of skilled and experienced people to join their crews and is behind this program 100 percent.”

During the first nine months, apprentices will train at Spaulding Marine Center, where they will learn shop safety and tool skills while also gaining familiarity with marine carpentry, structural work, propulsion, and yacht systems. They will then spend the next six months rotating through Bay Area businesses and have the opportunity to practice their skills while learning from electricians, diesel mechanics, riggers, carpenters, composites experts, and other specialists throughout the industry.

“We’re not here to simply create people who can use tools” added Jay. “We’re planning on teaching our apprentices to be craftspeople, people Myron Spaulding would be proud to work with.”

Applications close on April 15. If you know of any young person who is interested in a career in the marine industry, be sure to send them this story.

Longtime Point Richmond resident and adventurer Chris Aiden Welsh passed away suddenly on March 15 at age 58. Rarely if ever does one cross paths with an individual as interesting or as accomplished as Chris. He was passionate about everything from airplanes to submarines and many things in between.

Born and raised in Newport Harbor, California, he was introduced to sailing by his mother, Sally Welsh, at age 3, but was drawn to other watercraft before immersing himself in sailing. In college he focused primarily on rowing at UC Berkeley while studying finance and real estate.

It wasn’t until later in life that he came across Ragtime, a Spencer 65 that he purchased at auction. Welsh and Alan Andrews prepared Ragtime for the 2008 Los Angeles to Tahiti race. Although faced with numerous technical difficulties, they finished first on corrected time, winning the Fritz Overton Perpetual Trophy. Chris also went on to win his division in that year’s Sydney Hobart Race. Ragtime’s reputation spans numerous ocean and inshore regattas, including the Transpac (17 crossings), Newport Beach races, and the Big Boat Series on San Francisco Bay.

Beyond Ragtime, Chris immersed himself in the recommissioning of L’Hydroptère, the fast-flying, speed-record-breaking trimaran. His partner in the project, Gabriel Terrasse, has close ties with Airbus Industries and was most recently involved in the reconfiguration of L’Hydroptere’s amas in France. That project is slated to continue.

When not flying on the water, Chris flew airplanes. He was rated to fly five different types of planes and was close to being rated to pilot a Citation jet. He also had a keen interest in that which lay far below the sky, underneath the surface of the world’s five oceans. Chris purchased Cheyenne, Steve Fossett’s former Jules Verne record-breaking PlayStation, and used it as the ‘mothership’ for Pentarius, a submarine project focused on oceanic scientific and environmental research. He was particularly drawn to the well-being of giant squid and the impact of plastics on the ocean’s health. A licensed submarine pilot, he owned DeepFlight, LLC, a manufacturer of personal submarines. Beyond sailing and submarines, Chris’s real estate interests included Point Richmond’s Brickyard Cove Marina and nearby Sugar Dock.

Chris met his wife Tina Roberts on a blind date following a day of racing in the Rolex Big Boat Series in 2009. She’d had zero interest in the meeting (Chris was “super-excited”) and even rode her motorcycle to the St. Francis Yacht Club in hopes that a quick hello would lead to a solo ride back home. Unexpectedly, they had a great deal in common. Tina had lived in Seattle and sailed in the San Juan Islands on her own boat.

“It was the love of water, and, probably most importantly, it was the love of adventure,” says Tina. “I’m not shy, and I’m pretty adventurous. I’m an airplane pilot, and now I’m a submarine pilot. And I rode a motorcycle to Panama by myself the year before I met Chris. So, for him it was like ‘Wow this chick’s got game!’ and I had never met anyone I could actually go toe-to-toe with. We had such complementary adventures and complementary discussions about the world. I have traveled to 84 countries. I’ve lived in 20 countries, and he was like, ‘Oh, this is cool!'”

Chris is survived by his wife Tina, parents Terry and Sally Welsh, brother Doug and his wife, Mary, and their children, Charlie, Brittany and Becca. “And, as we like to say,” adds Tina, “a thousand sailors around the world. 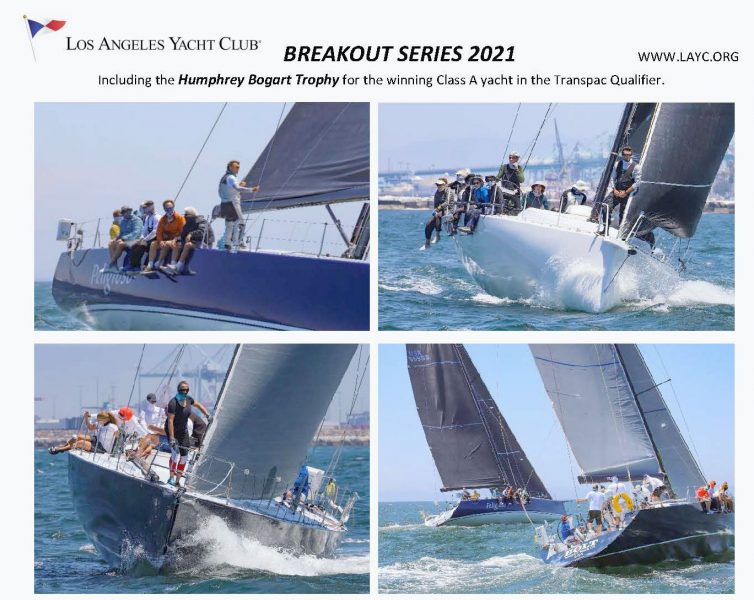 SHARE ON Tweet Share Email Linkedln
Receive emails when 'Lectronic Latitude is updated. SUBSCRIBE
'Lectronic Latitude: Friday, Mar 19
Girl Power
Celebrating History-Making Women Sailors
March is Women's History Month, and we'd like to pay homage to women sailors who pushed against the tide of sailing's traditional hierarchy to forge their way into sailing's record books.
This Time a Year Ago
Missing Mexico in March: One Year On
We were reminded of some of the beauty we'd experienced while sailing in Mexico when we saw Catalina Liana's photos of Wednesday's beer can racing on Banderas Bay.
Sponsored Post
Don’t Get Behind the 8-Ball with KKMI Boatyard
Don't be stuck behind the eight ball. Book your boat in now with KKMI.
The Things We See or Don't
Dock Follies from a Stroll at the Marina
One of the attractions of sailing is lifelong learning, and we have numerous examples of our own regular sailing follies to prove that's true.
A Fast Sail to Mexico
Will Records Fall in the Newport Beach to Cabo Race?
A 790-mile dress rehearsal for this summer’s big dance, the race from Newport Beach to Cabo San Lucas presents an invaluable opportunity for teams preparing to race to Hawaii in July.
Sponsored Post
Los Angeles Yacht Club Breakout Series 2021
Los Angeles Yacht Club Breakout Series 2021
More 'Lectronics »
Report Listing