On Tuesday, January 14, at 6 p.m., there will be a special joint meeting of the Sausalito City Council and the planning commission to discuss the General Plan, Sausalito’s vision for future growth. The meeting will be held at the IDESST Sausalito Portuguese Cultural Center, located at 511 Caledonia Street.

We strongly encourage the Latitude Nation to attend and voice their support for a robust, sustainable working waterfront in Sausalito. We’ll have more on the issues that will be discussed at the meeting in Monday’s ‘Lectronic Latitude.

Among the feature stories in the January issue of Latitude 38 is a Year in Preview. It begins:

Our 2020 dance cards are filling up fast with plenty of regattas and events to keep us busy on waters near and far. (Some of these events even conclude with actual post-sail dancing!)

Here we sample a few top hits from each month, but you’ll find a much more comprehensive list in the 2020 Northern California Sailing Calendar and YRA Master Schedule, published with this January issue on December 30.

That’ll get you started for the first quarter of the ’20s. To continue on, pick up the January issue or read it online here.

Several California sailors have made the shortlist for US Sailing’s 2019 Rolex Yachtsman and Yachtswoman of the Year, and fan voting is now open.

“The annual determination of this year’s awards represents a wide range of accomplished sailors at different stages of their respective careers and from various disciplines in the sport,” reads the announcement from US Sailing. “All of these finalists represent their own unique pathway to the top of the sport and have each mastered their craft with a dedicated focus on precision and performance on the grandest stage.” US Sailing will announce the winners live on February 6 in San Diego aboard the USS Midway Museum as part of the Sailing Leadership Forum.

Mike Martin and Adam Lowry, both from Mill Valley, had another triumphant season on the 5O5 circuit. They won the 5O5 World Championships in Fremantle, Australia. The win for Martin marked his fourth 5O5 World Championship. It was Lowry’s second. “Adam and I won every event that we sailed together,” said Martin. “Mike and I really made strides in our weaker conditions,” said Lowry. “We’ve always been fast when the breeze is up, but this year we really turned a corner in light air, choppy, shifty, sloppy stuff. Winning the NAs in Kingston in really challenging conditions was really satisfying.”

Renowned match racer Nicole Breault of San Francisco has always been a well-rounded and versatile sailor. Her skills as a tactician aboard Good Trade were on full display at the 2019 J/105 North American Championship, held last September in Marblehead, MA. Breault and crew defeated the fleet of 18 teams.

“My experiences in match and fleet racing fuel one another,” she said. “Because of my role on the J/105, I get to focus more on racecourse strategy and tactical situations, all while finessing boat speed with input on trim and angles. I need these elements to be second nature when I am match racing. In turn, match racing gives me a strong understanding of rules and tactics of the game, and I am more effective at anticipating and managing outcomes among boats in fleet racing.”

Kiting phenom Daniela Moroz of Lafayette makes the shortlist for the fourth consecutive year. In 2016, she became the youngest to ever win the award, female or male, at the age of 15, when she burst onto the kite foiling scene. In 2019, Moroz once again defended her Formula Kite World Championship with a resounding victory on Lake Garda in Italy, her fourth consecutive World Championship against a growing and increasingly talented women’s fleet of 30 competitors.

“I’ve won pretty much every title I can get this year,” she said, “which was my goal for the year. I’m really happy with that, and it feels awesome. It’s been a really good year, probably the best of my career so far. I am most proud of my gold medal win for the US at the 2019 World Beach Games. The extremely marginal conditions and different racing format made it very challenging to consistently win.”

Willem Van Waay of Coronado proved his wide array of skill sets again in 2019 for several teams across many events and various classes. The tactician’s year was highlighted by a win at the J/24 World Championship in Miami with skipper Keith Whittemore aboard Furio. Van Waay and crew outlasted the fleet of 79 to claim the first-place prize by 16 points through 10 races.

“In half of the regattas, I’m the trimmer as well as the tactician,” commented Van Waay. “In the other half, I’m listed as a trimmer, but always played a role in tactics as well. I’m often the one with eyes outside the boat making big picture tactical calls. I’ve been racing close to 200 days per year, on all sorts of different boats, for as long as I can remember.”

Young Floridians Berta Puig and Bella Casaretto grew their game in 2019 by winning their first Youth Sailing World Championship in the Girls 29er Event at Gdynia, Poland. Puig and Casaretto bested the fleet of 25 and won by 32 points over 13 races.

Here is one way to start the New Year. Take a little journey with me from La Paz, Baja California Sur, to Mazatlan, across the Sea of Cortez, aboard the gallant ship Hajime. She’s a Tartan 38, built in 1978, and old and tough as anything on the water. Jim, who prefers the title pilot, and I, with the title navigator, are the crew.

We left La Paz the morning of December 31, 2019. We had been watching for a weather window, because the north winds that flow down the Sea of Cortez are not friendly at this time of year — it’s not the winds so much as it is the waves. They like to stack up at five to seven feet with a five-second period. But it seemed like a good bet, and the next weather window was at the very end of the 10-day forecast period. We set out, but perhaps we should have heeded the omens. We were raising anchor, and found ourselves fouled on this gem of an old fisherman anchor, delaying our departure by half an hour or so while we horsed around with it.

My weather gribs, which we had pulled an hour before our departure, showed a south flow of wind along the mainland coast until close to 2 a.m. January 2, a mini-system spinning around a pressure blob in the middle of the Sea, and my considered opinion was that I didn’t want to be in it. Jim and I agreed to turn right and do our southing there in the middle. We hit a flat calm. I expected the system to move itself up the Sea and blow out before dawn, when we would be arriving in Mazatlan. I hadn’t really expected the thunderheads laced with lightning that were popping up here and there, but they mostly seemed north of our route. Sure enough, the wind and waves freshened from the west, and we shifted course toward our goal. We were moving along at sundown when we heard a mayday.

But there was a mayday, and we heard it, so we answered. The call was from a boat called Green Dragon 2, which was taking on water. They were 24 or so miles north of us, which is at the outside edge of normal radio transmission. There were lightning storms up there. I could see them. Damn it, I hate the idea of lightning when I’m on the boat. But we turned north with the wind now coming out of the west and the seas getting rowdier, and continued to call for the Mexican Navy, relaying for the boat in distress. Ominously, no one responded. There was complete radio silence.

We used our Garmin InReach to text my brother Alex to call the US Coast Guard. This is, by the way, one of the most frustrating modes of communication it has ever been my experience to deal with. It’s supposed to be linked by Bluetooth to my phone, but that connection is not really clean. Jim wound up having to do most of it, and had to do it using the InReach device itself, which has no keyboard, only an alphabet panel and a directional pointer, which is hard to use properly when the boat is moving in all directions at once.

The CG told us that they had received the EPIRB alert from Green Dragon 2 and alerted the Mexican Navy. At this point, communications screwed up. They said that the Mexican Navy had dispatched a unit, causing us to heave a sigh of relief. But we kept going because Mazatlan was 70 miles south of us, and that’s a long way off in water time. Even a fast boat only does 20 knots. How long does it take a boat to sink?

We kept hoping for backup. Green Dragon 2 reported water rising to the level of the batteries. Jim and I exchanged worried glances. How in creation were we going to find a dark boat in the middle of this stormy night? We were running radar, but hadn’t picked up a blip from them yet. Worse, we hadn’t picked up a navy ship on either radar or AIS. If we’d had a hand free, we would have tried to make that query through the recalcitrant InReach, but the boat was taking heavy seas on the port side, and we had all we could do to hang on and keep moving.

Readers — This was the first installment in a three-part series from Jessica Lockfeld about the rescue of the crew of Green Dragon 2. We’ll bring you part 2 on Monday. 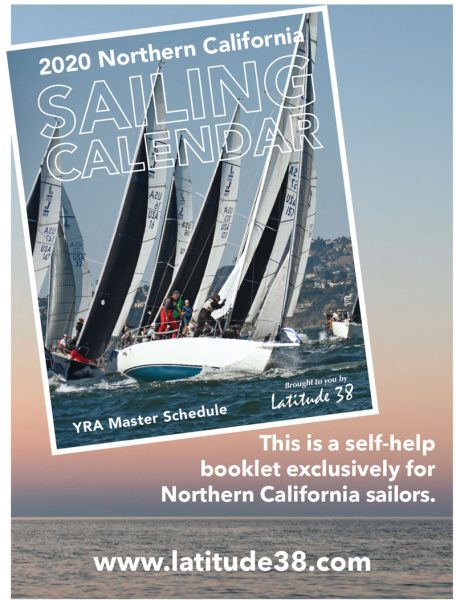 Need current race information? New to racing? Pick up this booklet for almost everything you need to get started.

SHARE ON Tweet Share Email Linkedln
Leave a comment
Receive emails when 'Lectronic Latitude is updated. SUBSCRIBE
'Lectronic Latitude: Wednesday, Jan 8
Resourceful Sailor Series
Tales from the Northwest Passage: Arctic ‘Bricolage’
I had spent the summer transiting the Northwest Passage, crewing on the 51-ft yellow wooden sailboat named Breskell.
All A-Quiver in the Ebb
An Old Latitude War Story
Back in the '80s or '90s, I went out on .38 Special, Latitude 38's first Bertram 25 photo boat, to shoot a race that used the Yellow Bluff buoy as a mark. As I knew the fleet would be pounding up there soon, I headed there directly from our Sausalito berth.
Sponsored Post
Brickyard Cove Marina Has Slips to Rent
Brickyard Cove Marina's property offers the opportunity to play where you work with 250-water slips, 120-dry slips and commercial office space to lease.
Get out the hip waders
Beware the King Tides
King Tides ‘King Tides’ are coming to California on January 10-12 and February 8-9.
Environmental News
A Brief Word About the Fires in Australia
In late December, as Australia’s largest city was choked with smoke from the devastating wildfires burning in the country’s interior, the Big Boat Challenge, a practice race for the Rolex Sydney Hobart, was canceled due to the poor air quality.
More 'Lectronics »
Report Listing