It was the best kind of win for what’s fast becoming the best kind of race. Due to glitches on boats and ashore, nobody knew who was ahead or who would win the 700+ mile Race to Alaska until they hove into view off the Ketchikan Yacht Club yesterday.

As the race site noted, it was a “five-cruise-ship day” in Ketchikan, but among the faithful, there was definitely “a disturbance in the Force.” When a sail finally appeared 10 miles out, race organizers and TV crew scrambled into their chase boats and zoomed out to see who it was.

“Who’s winning?” came the question from Team Angry Beaver – Skiff Foundation, as soon as the greeters got within earshot. At the cry of “You are!” the Beavs whooped and hollered and popped open their last five beers.

The Seattle-based team’s former Bay-based Schock 40 (ex-Secret Squirrel) is the second monohull in as many years to take the $10,000 first prize. In second to claim the set of (really nice) steak knives was Team Pear Shaped Racing. That was it for the awards.

The San Francisco-based Team Shut Up and Drive was third, with last year’s winners, the all-female team Sail Like a Girl, fourth. As of this writing, 11 other boats had finished. The remaining 22 will continue to trickle in until the June 14 cutoff.

The dramatic finishes of this year’s R2AK made us think of the good old days before instant communication when, on long ocean races, you often didn’t know who the winners were until they showed up. For the R2AK, though, that drama was unintentional. Radio glitchiness caused some boats to figuratively disappear for days. The rain and overcast sometimes made their disappearance literal. Pre-race favorites Pear Shaped Racing were among those afflicted. Their lithe 34-ft trimaran had the speed, and the crew had the racing pedigrees, not only to win but to annihilate the course record. But most venues they’d raced in didn’t include logs (they hit four of them, the last of which killed their radios). Negotiating Seymour Narrows, where the current can run up to 12 knots, was likewise a tad beyond their ‘local knowledge’ purview.

As another R2AK winds down, we find ourselves already eager for the next one. With the simplicity of the concept — “no motors and no outside assistance” — and the reality of fitting sailboats with paddles and rowing stations and then braving cold water, strong currents and the occasional curious bear for hundreds of miles up the Inside Passage . . . what’s not to like?

As the event continues to gain ‘cred’, we expect to see most of this year’s participants once again return to The Last Frontier, along with a bunch of new adventurers. Perhaps you may be among them . . . ?

To date the owners of approximately 20 boats have expressed interest in doing a fifth SoCal Ta-Ta. The Ta-Ta is the six-day Baja Ha-Ha-like event from Santa Barbara to Two Harbors, Catalina, with stops at Santa Cruz Island (two nights), Channel Islands Harbor and Paradise Cove.

This is the best cruising Southern California has to offer, and the first four were a blast. To be held during either the second or third week in September, this year’s event would also feature Southern California’s best weather.

As previously mentioned, we need the owners of at least 30 boats to express serious interest in the rally, or else it’s simply not worth going through the considerable organizational hoops to make it an official event.

While it now looks somewhat unlikely that there will be enough boats, we’ll give everyone until next Wednesday to come aboard. So if you are interested, please email richard@latitude38.com ASAP. After Wednesday, we’ll let everyone know the final decision. 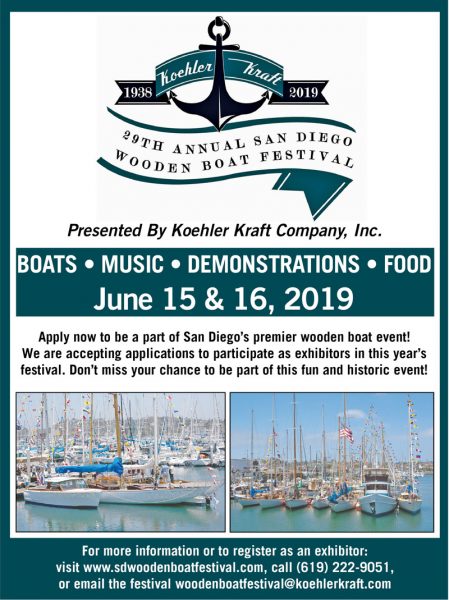 Nowadays, hundreds of boats make the month-long passage from the West Coast of the Americas to French Polynesia each year. But 47 years ago only true adventurers dared to attempt it. Rose and Frank Corser fit that profile.

They were both in their mid-30s in 1972 when they set sail from Newport Beach for the Marquesas Islands aboard their 35-ft Seagoer Buccaneer — a design similar to Islander, the boat that Harry Pidgeon famously sailed around the world in the 1920s to become the second solo circumnavigator (after Joshua Slocum).

Even today, the Marquesas are considered to be some of the most remote, exotic and undeveloped islands on Earth. But back in ’72 these jagged volcanic isles may as well have been on the moon — and for Rose and Frank that remoteness was part of the attraction. She was pursuing a master’s degree at the time, and figured that the Marquesas’ unique arts and handicrafts — including dramatic full-body tattooing — would make a fascinating thesis.

Following their 1972 trip to the islands, Rose and Frank returned in 1979 in the Cascade 42 Courser (no typo) and eventually opened the Keikahanui Hotel on a hilltop overlooking Nuku Hiva’s main anchorage, Taiohae Bay. According to Rose, back in the day it was a prime happy-hour destination for the salty international cruisers who arrived each spring — of whom she still has happy memories.

Rose never did complete her master’s, but over the past 40 years she has become an acknowledged expert in Marquesan arts, and a good friend to the international cruising community — not to mention an occasional Latitude 38 contributor.

Although Rose sold that hotel years ago (it’s now the Pearl Lodge), she still runs the cozy He’e Tai Inn nearby, and maintains a fascinating mini-museum of Marquesas carvings and other handicrafts. If you ever find yourself in Nuku Hiva, be sure to check it out.

The Recreational Boaters of California, or RBOC, is calling on Bay Area sailors to take action.

Following a recent report from the Auditor of the State of California on the San Francisco Bay Conservation and Development Commission (BCDC), the RBOC is urging “boaters throughout the San Francisco Bay Area to contact their state legislators and urge them to follow up on the findings [of the] recent state audit and pursue the essential reforms to ensure that the [BCDC] performs its key responsibilities in a fair, consistent and timely manner. This is important to ensure that the thousands of Bay Area boaters have access to marinas and boatyards.”

The RBOC has several recommendations to reform the BCDC, including reducing the size of its 27-person commission, which RBOC says is “too large to provide effective governance,” and reactivating the Citizens’ Advisory Committee.

Following the auditor’s report in mid-May, many critics of the BCDC felt that the agency had effectively spun what was a scathing review, including the assertions that the BCDC had failed to perform some of its key responsibilities, and had allowed ongoing harm to the Bay. Critics — including the SF Bay Stewardship Alliance — also felt that the BCDC’s attitude was along the lines of, “We just need more money and more staff,” rather than acknowledging that broad, systemic change was necessary.

Many people — including us — believe that the BCDC needs a substantial legislative (and drastic) fix.

The RBOC provided a link to identify your legislators. Please click here.

SHARE ON Tweet Share Email
2 Comments
Receive emails when 'Lectronic Latitude is updated. SUBSCRIBE
'Lectronic Latitude: Monday, Jun 10
Historic Schooner Struck
The Sinking of Wander Bird
We were shocked to receive the news that the German pilot schooner Elbe No. 5  — which several generations of Bay Area sailors will know best as 'our' lovely Wander Bird — sank on Saturday after a collision with a commercial ship on the Elbe River near Hamburg.
Watersports
Electric Foilboarding Is Now a Thing
We once saw a man walk on water. We were sailing back home to Lowrie in San Rafael after a long, splendid day on the Bay. As we close-reached up the channel, we saw a man . . . surfing without a wave, sail or kite. If we hadn't been keeping up on watersports trends, we may very well have thought that someone was walking on water.
Cabron Is for Sale
Oceanic Yacht Sales
2013 Cookson 80 designed by Botin, Cabron is a high powered racing yacht.
When Poop Reigns
The Birds
We were out of Cabo San Lucas headed for Puerto Vallarta when a frigatebird came swooping in, circling, circling, gliding in a steep left bank until its wingtip nearly touched the ocean, the top of its wings black, glistening in the late afternoon sun.
Latitude Logowear
I Won!
Congratulations to two winners of Latitude 38 swag. Stephen Buckingham picked up a copy of the June issue at South Beach Yacht Club at San Francisco's Pier 40 on May 31.
More 'Lectronics »
Report Listing