“I have certainly got my money’s worth from the entry fee,” Tapio had joked with race organizer Don MacIntyre. “This is the best organized race I have ever taken part in, and the most selfish thing I have ever done,” he said at his press conference on Sunday. “It is the fulfillment of a lifelong dream. I’m not enrolling myself just yet, but yes, absolutely, I would do it again!”

Twenty sailors from 10 countries have already signed up to compete in the next Golden Globe Race, slated to start on September 4, 2022. Two of them are Americans, Guy deBoer, 63; and Doug Dean Johnson, 53.

About low points during his 322 days at sea, Tapio said: “I had been sailing neck-and-neck with Istvan Kopar across the Indian Ocean. Suddenly he started to get away. I thought there must be something wrong — perhaps a fishing line caught in the propeller. I dived overside during a calm spell before the Hobart film drop to investigate. It was not a rope or net, but barnacles growing all over the hull. When I first saw them on the bottom, I knew my race was over.”

Tapio readily admits to an aversion to sharks. While preparing to dive during a calm period after leaving Tasmania, he recalled: “I was tying my improvised boarding ladder to the boat in preparation of diving overboard and spotted this huge shark swim alongside the boat. And that was the worst day of my life.”

One boat remains at least partly in the game. Relegated to the Chichester Class for having stopped in Albany, Western Australia, Russian sailor Igor Zaretskiy plans to restart his circumnavigation this fall. Twelve skippers retired from the race.

Sir Robin Knox-Johnston, the only finisher of the original Golden Globe Race in 1969, has published a report about the lessons learned from sailing small yachts in extreme conditions, including the five dismastings suffered during the GGR. Click here to read his report.

Last Wednesday, Jeanne Socrates suffered a knockdown between Tasmania and New Zealand and sustained serious damage to her solar- and wind-charging units. But she is pressing on to become the oldest person to sail alone, nonstop and unassisted around the world.

“Having rounded the South East Cape of Tasmania last week, I was close to rounding Stewart Island’s South West Cape — just over a day away — and was sailing southeast well in 45-knot winds and 8-meter (25-foot) seas with minimal staysail, when the knockdown occurred,” Socrates wrote us in an email. “Sails, rig, most instruments (autopilot and radio) are fine. No injuries, but a lot of wet chaos down below.”

“In addition to other damage, two solar panels were torn away and a wind-generator blade was broken off.”

In late April, Socrates started having trouble with her self-steering vane, and had been using her mechanical autopilot. “Power becomes an issue since I no longer have a wind-steering option, after that was damaged south of Australia a fortnight
ago, and I’m forced to use the autopilot most of the time now — and that needs
power, of course.”

Despite all this, the 76-year-old Socrates shows no signs of stopping, even though she’s within a stone’s throw of New Zealand.

“Plan is to avoid the next imminent strong system now heading this way from the southwest by sailing north for a couple of days before turning south again. Hoping to round the South West Cape on Stewart Island next week in lighter conditions. That will be the end of a very long Southern Ocean leg (from before Cape Horn in December) and the beginning of the long final Pacific Ocean northbound leg back to Victoria, B.C., to complete my nonstop solo unassisted sail around the globe as the oldest person to do so.”

Socrates said that as a wave slammed into her Najad 380 Nereida, a dorade vent was swept away “just above where I was sitting at the time, leaving a hole in the coachroof. My bunk and I got a good soaking. Everything onboard was thrown around and became soaking wet — including my bedding, bunk and
me.”

Socrates also said that her drogue was automatically deployed surfing the knockdown “when the two bags containing it were also torn from their fixings and the line with its cones was clearly pulled out of the bags by the force of the sea. So we ended up lying to the drogue (for the third time in the last few weeks) — drifting north northeast at about 1.5 knots in 8- to 9-meter seas and strong winds gusting to 50 knots or more.

“Will take some time to clear up the mess but I’m hoping to retrieve the drogue Friday morning, by when conditions will be far lighter, and get underway again.” 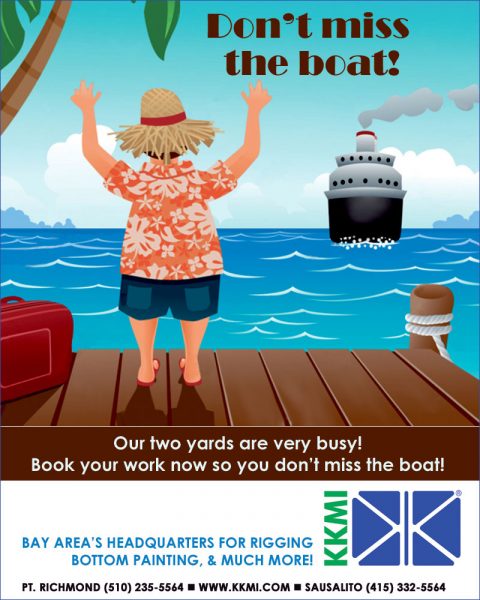 As California is in the midst of being swallowed by late-season rain, a coalition of  state lawmakers and interest groups — their drought concerns satiated, but their fears of swelling vegetation and exploding pollen counts on the rise — have decided to take legal action against the aberrant weather. “This is just not in line with our expectations of May weather in Northern California,” said one assemblyperson who spoke on the condition of anonymity. “We’ve had enough rain already. We’re done. It’s over. Someone send Mother Nature the memo, or we’re sending her a subpoena.”

Among the coalition taking action against nature are a group of Bay Area windsurfers who say that, given the consistent early-season wind, they feel entitled to continued summer conditions, which certainly do not include downpours in mid-May. “If there’d been no rain on Saturday, then it probably would have been a good day for sailing,” said one windsurfer, who asked not to be identified. “I moved to the Bay Area 30 years ago because the season is so consistent. If you take that away, then you have to ask yourself, ‘What are we even doing here?'”

Other people in the coalition have complained that, given the warm spring, browning hills and other indicators that the West Coast was well on its way to summer, they had packed up their rain gear for the season and feel unprepared and undergunned for showers. Last week, we witnessed several people struggling to operate their umbrellas.

One group has indicated that it may countersue if the “Don’t Rain on My Parade” lawsuit (as it’s come to be known) moves forward. A consortium of ski-resort owners has welcomed the weather.

“This is so sick!” said one board member of a Tahoe resort — that owner clarified that by “sick,” they were not being pejorative, and in fact intended the slang for cool or hawt or fabulous, as defined by Urban Dictionary. “We are still getting totally hammered with rad pow days in spring, when we would normally just have corn or soupy slush. These storms are all-time!”

*Latitude Nation — This story has been entirely fabricated, though our occasional frustration with the rain this last week has been at least somewhat rooted in reality . . . mostly because it’s deadline time here at the magazine, and we couldn’t make it to Tahoe for the late-season pow (powder snow). 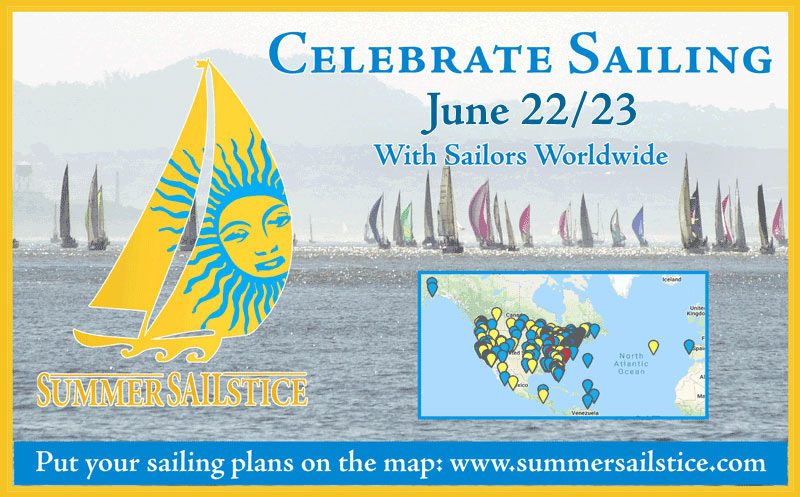 SHARE ON Tweet Share Email Linkedln
Leave a comment
Receive emails when 'Lectronic Latitude is updated. SUBSCRIBE
'Lectronic Latitude: Friday, May 17
Repair and Maintenance
When the Keel Smiles, Part 2
After finding that there was a crack in her keel (please see part 1 on Monday), singlehanded cruiser Elana Connor had her 1985 Sabre 34 MkI Windfola hauled out — and was told that the crack was “just cosmetic” — before departing for San Diego for a more thorough investigation.
Weather Politics
Opinion: Write Your Senators to Oppose NOAA Nomination
In late 2017, President Trump nominated Barry Myers to head the National Oceanic and Atmospheric Administration, or NOAA, a choice that was seen as controversial, even for an administration that was voted in on being unconventional.
Station Golden Gate
Coast Guard Water Safety Fair
National Safe Boating Week
Safe Boating Week Starts Tomorrow
The US Coast Guard recorded 4,291 accidents that involved 658 deaths and 2,629 injuries in 2017, the most recent year for which such statistics are available.
Delta Cruising Seminar
Delta Doo Dah Kickoff
Delta Cruising Seminar & Kickoff Party, May 18, 6-9:30 p.m., at Richmond Yacht Club
More 'Lectronics »
Report Listing