It is a feat so astonishing that this simple introductory sentence does not seem to do it justice: Webb Chiles has just completed his sixth circumnavigation. The 77-year-old singlehanding legend slipped into San Diego Bay early this morning after finishing the fifth and final leg on a voyage that began in 2014 aboard his Moore 24 Gannet.

“I woke up this morning and checked Webb’s tracker,” said Latitude contributor Lee Johnson, who is presently docked at Silver Gate Yacht Club on Shelter Island. At 5 a.m. Chiles’ tracker showed him just outside the harbor. Johnson pedaled his bike down to the police dock, and saw Chiles motoring in.

“He came ashore looking like he rolled out of the penthouse suite at the Ritz-Carlton, especially for someone that just came off six weeks off an agonizingly slow passage,” Johnson told us by phone this morning.

Chiles left San Diego for New Zealand in 2014. In 2016, he sailed from New Zealand to South Africa, then from Durban to Florida in 2017. Chiles sailed up and down the East Coast in 2018 before leaving South Carolina early this year, heading through the Panama Canal, and on to San Diego.

We’ll have more on Webb Chiles latest circumnavigation in the June issue of Latitude 38.

Last Wednesday, Randall Reeves, who has been threading his way through the doldrums, squeaked back into the Northern Hemisphere after almost exactly six months below the big latitudinal line.

“At 5:15 p.m. today we crossed the equator and re-entered northern waters. It was October 25, 2018 when we crossed into the south, and we have been there ever since.”

Reeves said the line of demarcation to the doldrums last week was pretty clear. “Our soft but steady easterly softened by half and turned northeast. For several hours our average speed: 2.5 knots. Squalls overnight. I was on deck almost every hour easing sheets or hauling in again. Rain. Giant lines of cloud backlit by a moon so bright it almost hurt the eyes.”

Reeves hopes to arrive in Newfoundland in June.

Jeanne Socrates is slowly approaching the last of the Great Capes, and a long-awaited left turn back into the Pacific. 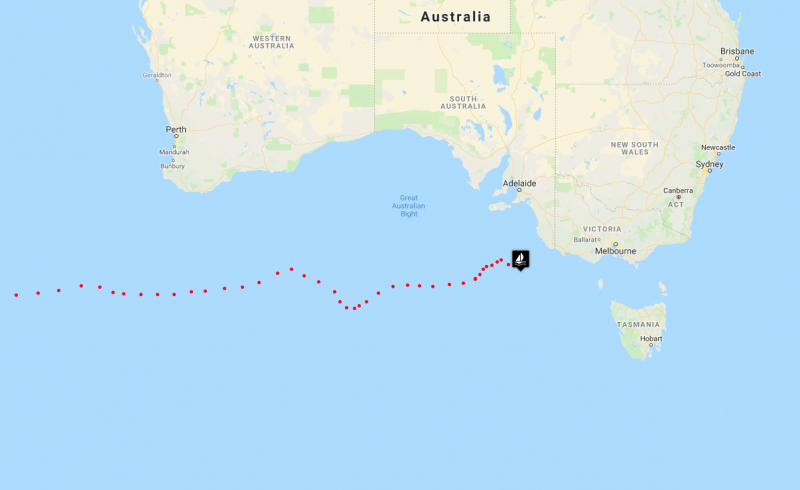 Sunday started brisk, gray and breezy — but like much of the summer season, the clouds parted, the sun shone through, and a cool breeze moved in. Except where it didn’t. Opening Day on the Bay showed off the spectacular nature of local sailing and a broad spectrum of conditions, depending on where you chose to sail.

This past weekend’s Opening Day was themed ‘Holiday on the Bay’. It was the 102nd annual Opening Day on the Bay organized by the 100 member clubs of the Pacific Inter-Club Yacht Association, or PICYA. In 1963, the Corinthian Yacht Club added the blessing of the pleasure craft to Opening Day festivities, modeled on age-old traditional benediction of working-fishermen’s vessels. The Corinthian positions a blessing vessel, with clergy of multiple faiths, in Raccoon Strait in front of the club to bless all boats and boaters for the coming season. The PICYA parade route starts at Crissy Field and passes down the Cityfront, past the San Francisco fireboat with hoses blasting, and finishes just to the east of Pier 39.

There’s no racing scheduled on the Bay for Opening Day so racers, many of whom have been racing all winter long, can join the parades and join the ranks of ‘pleasure craft’ that are out doing their recreational best. Even the foiling SailGP boats, which are anxious to be out practicing for next weekend’s Cityfront event, stayed off the Bay to make room for the hundreds of boats getting their spring blessing.

How was your sailing weekend?

Last month, the International Laser Class Association (ILCA) announced that it was terminating the agreement with LaserPerformance, a longtime builder of Lasers. ILCA claimed that LaserPerformance had breached the terms of the Laser Construction Manual Agreement, which seeks to ensure the identical nature of all Laser class boats, regardless of where they are built. But, there’s a problem. LaserPerformance holds the right to the Laser trademark. ILCA needed to change the name of the new boats. Starting on April 25, all new, class-approved boats will be sold and raced with the name “ILCA Dinghy.” (Hmmmm, does ILCA still stand for “International Laser Class Association?”) New class-legal sails for all rig sizes will carry an ILCA logo instead of the ubiquitous red Laser graphic.

The stakes are high in this conflict, most notably the future of the class’s inclusion in the 2024 Paris Olympics. Currently the Laser and Laser Radial are the ‘equipment’ for the men’s and women’s one-person dinghy events.

Based in Connecticut and the UK, LaserPerformance builds Lasers, Sunfish, 420s, FJs, Darts and other small boats. Bruce Kirby and Ian Bruce developed the Laser in 1969-1971. ILCA was founded in 1972. In 2007, Performance Sailcraft Europe and Vanguard Sailboats merged to create LaserPerformance. ILCA posted an FAQ about all this on April 6, and ILCA president Tracy Usher, a Bay Area sailor, addresses our readers in a Letter coming out in the May issue of Latitude 38 on May 1.

San Diego YC will host the Yachting Cup on May 3-5, with racing on the Coronado Roads ocean venue and in San Diego Bay. Organizers expect 100 or so boats in about 10 classes for one-design and handicap racing. New this year are a non-spinnaker class (or classes), and the Harbor 20 one-design class that will be sailing in South San Diego Bay. The non-spinnaker classes will start and finish in South Bay and race up into San Diego Bay on random-leg courses. “This is going to be a major change for the Yachting Cup,” explains regatta chairman Tim Fuller. “Our intention is to open up the event and attract a wider range of skill levels to participate and get off the docks. You never know who might come out of the novice ranks and develop into full-blown racers.” Registration closes tomorrow, April 30.

The YRA Great Vallejo Race offers something for everyone on May 4-5. Quoth the YRA: “It’s an epic race, with an epic party. No matter what type of boat you sail, we’ve got a division for you: multihulls, PHRF, one-design, non-spinnaker, even a cruising division.” Returning this year is an overall trophy for the fastest monohull (on corrected time). Vallejo YC will host the Saturday night merriment, including a Mexican Fiesta served 5-8 p.m. for $12 and live music with The Class Action Band 7-11 p.m. The club bar, outdoor satellite bar and beer trucks will pour libations. You can buy $20 bundles of ‘race bucks’ to be used for drinks and food. Fuel up for Sunday’s race back down to Southampton with a pancake breakfast for $10. Registration will close on May 1 at 5 p.m.

The Vallejo Race unfortunately conflicts with the SailGP regatta on the Cityfront, so many sailors will need to choose between actually racing and watching other people race.

The Singlehanded Sailing Society will open their ocean season with the Singlehanded Farallones Race on May 11. Register by Wednesday, May 8, also the date of the (optional) skippers’ meeting (and awards ceremony for the previous SSS race, Round the Rocks). Island YC in Alameda will host the meeting at 7:30 p.m.

StFYC invites Laser Standard, Laser Radial, C420, 5o5, F18 and Weta classes, plus hydrofoil kiteboarders, to race in the Elvstrom/Zellerbach Regatta on May 11-12. The YRA’s Summer Series continues and the CBRA Series kicks off on May 18.

The Master Mariners Benevolent Association has made a couple of changes to their Regatta on May 25. Starts will still happen at 5-minute intervals, but the race will be scored on handicap, not as a pursuit race. For those who wish to take it easy on their vessels, the MMBA now offers a Parade Class, for a gentle downwind sail along the Cityfront to the party at Encinal YC. The deadline to register is May 1. See the MMBA’s new website at www.sfmastermariners.org for details. The Master Mariners Regatta will be the first race in a new championship series that will include SFYC’s Belvedere Classic Regatta and Great Schooner Race on July 13 and conclude with the Jessica Cup at StFYC on October 19.

Whiskeytown Sailing Club welcomes trailerable sailboats to Whiskeytown Lake west of Redding on May 25-26. In the opposite direction on vastly different boats, California Offshore Race Week will kick off on May 25 with the start of the Spinnaker Cup, presided over by SFYC west of Angel Island. Monterey Peninsula YC will receive the racers. On May 27, they’ll send them off to Santa Barbara YC in the Coastal Cup. The SoCal 300 to SDYC will wrap up the race week with a May 30 start. New this year is the California 500, for really fast boats, starting in San Francisco on May 30 and sailing directly to San Diego.

SHARE ON Tweet Share Email Linkedln
Leave a comment
Receive emails when 'Lectronic Latitude is updated. SUBSCRIBE
'Lectronic Latitude: Friday, Apr 26
Boats in Oakland Estuary Crushed in Cleanup Operation
On Wednesday in the Oakland Estuary, roughly 10 sailboats designated as abandoned, derelict and illegally anchored were destroyed.
Navy Training Barque
Peruvian Tall Ship Sails in the Gate
A hardy crew of sailors were onboard Call of the Sea’s Schooner Seaward this morning to welcome the BAP Union as she sailed through San Francisco’s famous Golden Gate. As the Union entered the Bay and sailed gracefully beneath the Golden Gate Bridge, we considered ourselves to be among the fortune few who witnessed this once-in-a lifetime spectacle.
Inventory Blowout
Inflatable Boat Specialists Sale May 4
Annual Tent Sale Saturday, May 4, 11 a.m.-4 p.m. Inventory blowout: boats, outboards, electronics, trailers, parts and more.
SailGP on San Francisco Bay
The Right Stuff: Breaking 50 Knots
SailGP founder and five-time America's Cup winner Russell Coutts landed to see what was taking shape as the second heat of the 2019 SailGP circuit readies for its US debut on San Francisco Bay May 4-5.
More 'Lectronics »
Report Listing