The head coach of Stanford University’s prestigious sailing team was indicted yesterday for accepting bribes to recruit students. John Nicholas Vandemoer pleaded guilty on Tuesday to one count of conspiracy to commit racketeering. The longtime sailing coach was immediately fired.

Vandemoer is wrapped up in what’s being called the largest case of college admissions fraud in US history. The sweeping federal investigation brought against some 50 individuals yesterday implicates elite institutions in academia, including Yale, Georgetown, the University of San Diego and USC. “Thirty-three well-heeled parents were charged in the case, including Hollywood celebrities and prominent business leaders, and prosecutors said there could be additional indictments to come,” the New York Times reported.

According to the Stanford Daily, Vandemoer, 41, accepted bribes in exchange for recruiting two students to Stanford’s sailing team, even though they were not high-caliber athletes. “Neither student enrolled at the University,” the Daily reported. “One student was the daughter of Massachusetts real estate developer John B. Wilson, according to the Federal Bureau of Investigation affidavit. The identity of the second student is unclear, but Vandemoer reportedly accepted $270,000 in payments to Stanford’s sailing program as part of the scheme.

“He pled guilty in Boston federal court on Tuesday afternoon. As part of the plea deal, Vandemoer’s attorney agreed with prosecutors to recommend an 18-month prison sentence for the former coach.”

In a 2017 interview with Scuttlebutt, Vandemoer made what was at the time an innocent — but is now an eyebrow-raising — comment. “Varsity coaches have the ability, if needed, to ease entrance requirements?” Scuttlebutt asked the coach. “Every school is a little bit different but, yes, generally that’s true,” Vandemoer responded. Hmm.

John Vandemoer was in his 11th year as Stanford’s head sailing coach. “Since taking the helm, Vandemoer’s teams have won 29 of 30 [Pacific Coast Collegiate Sailing Conference] spring conference championships, and have qualified for at least the semifinals of all three spring ICSA [Inter-collegiate Sailing Association] national championships,” Stanford said on its website. Vandemoer began his collegiate coaching career at the famed St. Mary’s College of Maryland between 2003 to 2006, where he was an assistant coach. Vandemoer was also “head coach at the United States Naval Academy for two seasons (2006-08). [He] led the Midshipmen to five national championship appearances in two seasons.”

Like most winning teams, Stanford was, at times, reviled  for its success in West Coast college sailing. Some of our staff recall competing against, and decisively losing to, the Cardinal decades ago. Stanford has taken first in the PCCSC’s coed, women and team divisions every year between 2010 and 2017.

“Stanford always had new boats and sails at all the college regattas when our boys went to Cal Poly SLO,” a friend of Latitude said. “We bought the Cal Poly team their boat and all the sails. The only boat was trailered on a loaned trailer. This really makes me sick — sailing equipment does make a big difference.”

We don’t wish to disparage the many talented and hard-working sailors who have gone through the rigors of the Stanford program. We don’t believe that an indictment of one rogue member implicates anyone else in their machinations.

But this scandal highlights a growing disparity in privilege and opportunity, as well as a ruthless, now seemingly out-of-control college-admissions process. “The authorities say the parents of some of the nation’s wealthiest and most privileged students sought to buy spots for their children at top universities, not only cheating the system, but potentially cheating other hard-working students out of a chance at a college education,” the New York Times said.

US attorney Andrew Lelling echoed the sentiment. “For every student admitted through fraud, an honest, genuinely talented student was rejected,” Lelling said yesterday at a press conference in Boston. “We’re not talking about donating a building. We’re talking about deception and fraud.”

Late Show host Stephen Colbert put another twist on the scandal: “If you think America has a system that heavily favors the rich and famous . . . well, you’d be right.”

You can send your entries here, or comment below. 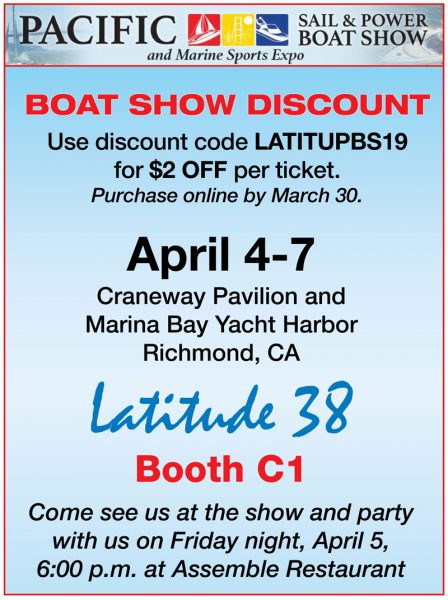 Have you been daysailing on the Bay or cruising around the coast but thinking of starting a racing program? “We’ve got a seminar for you,” says the Yacht Racing Association. “Kame Richards, Seadon Wijsen and a few select YRA board members will talk about the ins and outs of starting a racing program and getting your boat and your crew ready for racing on San Francisco Bay.”

Berkeley Yacht Club will host the seminar starting at 7 p.m. on Monday, March 18.

Kame Richards and Seadon Wijsen, local sailmakers and experienced, successful racers, will lead the seminar. “If you’ve been thinking about trying out racing but weren’t sure how to get started, this talk will set you on your way. Have friends or dock mates you think should get out on the race course? Bring them along.” Or share this story with them.

Registration is $20, and you can sign up online here.

Seeing this seminar on the calendar reminds us that beer can season is coming right up, and these casual evening races are a great way to dip your toes into the waters of yacht racing. Check out a list of series here: https://issuu.com/latitude38/docs/yra2019/56.

Not everything about sailing and marine recreation is recreational. If you’ve ever greased your own winches, cleaned the bilge, or fixed the myriad things that need tending to, you know that you must sustain your love of sailing through some challenging extracurricular work. If you’re lucky, you really enjoy boat maintenance projects.

But, below the surface of your personal boat maintenance, there’s an entire industry and infrastructure that supports your ability to spend time on the Bay. The hurdles involved in maintaining the infrastructure with thriving marine trades are only getting more daunting. Last week, we attended the California Boating Congress in Sacramento organized by the Marine Recreation Association. The Congress unites members of the boating industry with recreational boaters to address many of the regulations that put increasing strain on marine businesses.

Sacramento is best enjoyed as a Delta cruise destination rather than by sitting in a fluorescent-lit conference room. However, like winch maintenance, it’s among the things the sailing community needs to do to maintain the ability to sail. Fortunately, members of the marine trades, trade organizations, Recreational Boaters of California (RBOC) and individual boaters make an annual pilgrimage to learn about new legislation and speak directly with legislators about the impact of laws and regulations on boaters and the boating business. This is a time and place to make your voice heard. Of course you can also call or write your legislators any time.

The original intent of much of the regulatory structure was to clean up a Bay that was an environmental disaster 50 years ago. It’s done a miraculous job. The Bay is much cleaner. It can and should be cleaner still. However, we wonder if money spent on laws and lawyers would be better spent on filters, abatement, restoration and technological advancement. Many of the people involved in legislation, regulation and environmental cleanup don’t sail or hang out on the waterfront. They don’t really understand the efforts boaters and marine businesses make to clean up the Bay. The California Boating Congress shares knowledge about these efforts and the impacts that wide-ranging regulations can have on the continued enjoyment of the Bay, Delta and the entire California coast.

Like the top image of regulations covering boatyards, this topic could fill reams of paper — and literally does. But we were happy to attend the Congress and see the members of the boating community who are working to preserve access, participation and the marine trades that make it all possible. The MRA, the California Boating Congress and the RBOC would like all sailors to see support for their activities as just another piece of their annual boat maintenance.