Uku Randmaa crossed the finish line in Les Sables-d’Olonne at 9 a.m. UTC yesterday in the Golden Globe Race. Thousands of spectators lined the river entrance to welcome the 56-year-old Estonian solo circumnavigator and his boat.

Waiting for him at the dock were his wife Maibi and young twins Thor and Orm, who were born shortly before his departure. Race winner Jean-Luc Van Den Heede was one of the first to shake his hand, followed by second-place Dutchman Mark Slats, and two who were rescued in mid-ocean, Loïc Lepage and Susie Goodall.

After almost 252 days at sea, all he had left to eat was three packets of powdered soup, and he grabbed the pizza offered to him with both hands. Thanking God, Uku poured some champagne in the water, then sprinkled some on his boat, the Rustler 36 One and All. He saved the biggest portion for his Hydrovane self-steering — before passing the bubbly around to his fellow GGR skippers.

“I think I must have lost at least 20 kg,” he said. (That’s 44 pounds.) “By Hobart, I knew I was going to run short of food so I divided up what I had left by two — and then I divided it by two more. I had two meals a day; a freeze-dried dish and a cup of soup, but it has been very good for my health. If I did physical work, I got tired early, but it was not a major problem.” He had tried to catch fish to supplement his diet, but went a week or more with no success.

The hardest part of the voyage was lack of wind. “I was stuck in the St. Helena high-pressure system for more than a week. My biggest worry was keeping the boat in one piece. I was worried that if something broke I might not be able to finish the race.”

Randmaa commented on the amount of trash in the oceans. “The biggest pollution — mainly plastic — was after rounding the Cape of Good Hope. There were streams of it in the ocean. I came across a door and, on another occasion, a complete tree. If I had hit that, I think my steering would have broken.”

He enjoyed the Southern Ocean the most. “The waves, the loneliness. The waves were amazing. I watched them for hours, and every one was different.”

Barnacles were a continuous problem. “At Hobart, someone said ‘I have good and bad news for you, Uku. The good news is that you could cut 10 days off your voyage time. The bad news is that you have to clean the bottom yourself!’ It was quite scary to see your boat from outside. The waters were ’round 6°C. I wore my survival suit, but it was very buoyant, so I had to put lines under the keel and pull myself down to scrape the hull.”

The Estonian was in third place by the Hobart film stop and maintained this position to the finish, despite a 72-hour penalty he received on January 20 for private routing information gained from a Ham radio operator. “This was my biggest dream in life,” he added, “and I am very, very happy to have realized it. And for that, I have to thank my wife.”

Surely, there could be no better description of Alan Olson, whose unrelenting vision and leadership has given birth to the Matthew Turner.

The award was given to Olson at the 46th Annual Conference on Sail Training anf Tall Ships in San Pedro “As usual, Alan was very humble about it,” wrote John “Woody” Skoriak. “As you can see in the photo [below], someone made a beautiful little model of the Matthew Turner, out of glass and brass (like stained-glass art). Alan said he had no idea that was in the works — he was very surprised.” 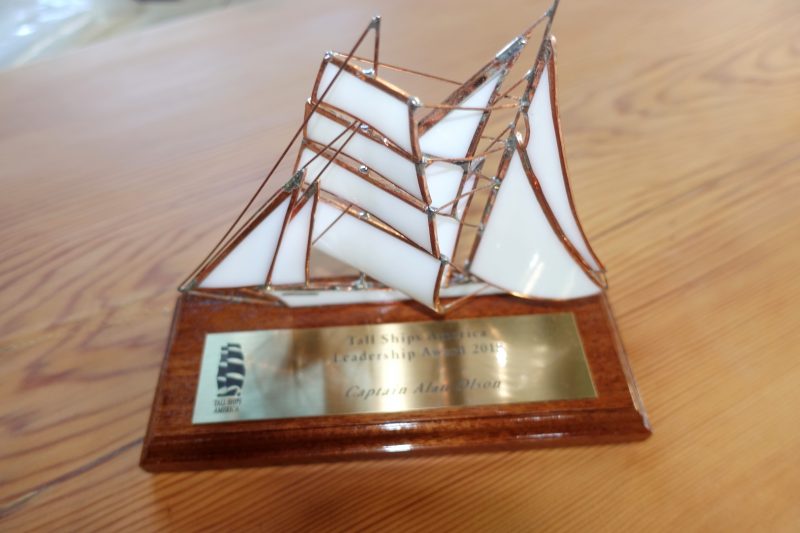 We think that the Matthew Turner — and the work done by Call of the Sea — is the most exciting thing happening in the Bay Area. You might be wondering, when is she finally going to sail? We don’t have an exact answer on that, but here is a hot little rumor.

“We hope that Matthew Turner will be able to at least sail around the course at the Master Mariners, but just to ’round the buoys’ as it were, not as a race participant,” Skoriak told us. “We also plan to have MT sail to Mexico next winter for sure.”

The upcoming Pacific Sail & Powerboat Show has more to offer than looking and shopping. There are numerous free seminars in addition to a few all-day, advance-registration seminars requiring a paid tuition.

Best selling DIY boat-maintenance author Nigel Calder will share his expertise with his always-popular seminar: Marine Diesel Engines: Maintenance and Troubleshooting and Understanding and Troubleshooting Boat Electrical Systems. If you’re planning to go cruising or just love knowing how your boat works, this highly valuable, advanced- registration lecture is a must.

Calder, who is known for his best-selling books Boatowner’s Mechanical and Electrical Manual and Marine Diesel Engines, will also present, along with John and Amanda Neal, an advance-registration Offshore Cruising Seminar. These very popular seminars usually sell out so it is advised not to wait to sign up. Click here for a full list of dates and times, or click here for the free seminar schedule.

Early-bird ticketing is now open online and you can receive a $2 discount by purchasing your tickets before March 30 and also get an extra $2 off (before or after March 30) if you use the Latitude 38 discount code: LATITUPBS19. Enter the discount code when you order your advance tickets on the Pacific Sail & Power Boat Show site.

We’re also planning ahead for our party on Friday, April 5, as well as getting our inventory of new hats and T-shirts ready to set up in the booth.

We look forward to seeing you all at the show in early April. We always learn a lot, have a lot of fun, and appreciate the opportunity to connect with so many Latitude readers.

Resourceful sailor Joshua Wheeler was looking for an easier way to handle his gennaker while sailing shorthanded. “I reinserted the D-shackle into the chain splice lead I had carefully kept intact and reinstalled the shackle to its original point on the cranse iron. The line forms a loop around the forestay on which the snap hook can freely slide from one side of the D-shackle to the other. Finally, I added whipping to the spliced line where the tucks met, securing and smoothing the area so the snap hook wouldn’t get snagged on them.

Here is the result from part 1 of his modification:

Does it work? Yes, it does. Now when I set up the gennaker, I attach the pendant to the snap hook on the loop. When jibing, I let the sheet fly and put the helm over, and the gennaker travels around the outside of the forestay. I jibe over the mainsail, pull in the opposite sheet, and trim the sail. There isn’t a need to douse the sail or unsnap the pendant. Barring any tangling or snagging of the lines, I don’t need to leave the cockpit and the helm.

Like any hardware and lines, I keep an eye on it for chafe and wear. The direction of pull on the loop varies with the course I’m on. This direction will be some combination of forward, up and off to the side. The more off to the side, the more it will rub against the toggle jaw on the forestay, creating a twisting force on the D-shackle and cranse iron. I wondered if this should be a concern — that my low-budget modification would cause high budget repairs.

After working the load numbers for the sail and comparing the forces and directions imposed on those of a traditional setup, I determined them to be comparable. Over time, the spliced line may chafe through from the sliding hook and from rubbing against the iron and the toggle jaw, but so far this hasn’t happened and is a good sign the forces are not too high. In the future, I may trade out the snap hook for a proper stainless steel snap shackle for higher strength and corrosion resistance. When I have the hardware, the design allows me to disassemble and reassemble the soft shackle in a matter of moments. I have yet to add the pole to the equation, but whereas the complexity of the jibe before made it out of the question, this simplification opens up new possibilities.

On Sampaguita, the gennaker can be a very useful sail and can make the difference between sailing and motoring. This small and simple modification has made a huge difference in safety and enjoyment. I am no longer hesitant to fly the sail, debating whether it’s worth the work and risk of tending and jibing. Once I had established a need and familiarized myself with the equipment and procedures, a simple solution became apparent. A small piece of extra line, an extra snap hook, some creative thought and some marlinspike skills were all it took.

The Resourceful Sailor hopes to give you ideas on how to have big adventures on small boats and budgets. Remember, keep your solutions prudent and safe, and have a blast.

SHARE ON Tweet Share Email Linkedln
2 Comments
Receive emails when 'Lectronic Latitude is updated. SUBSCRIBE
'Lectronic Latitude: Friday, Mar 8
Polynesian Voyaging
The Women Navigators
In this month’s Latitude, author Michael Kew brings us a dispatch from the South Pacific island of Yap, which could be considered the heart of the modest Polynesian Voyaging renaissance that’s taken place over the last four decades.
Solo Circumnavigators
An Update from Webb Chiles
Nation — Another solo circumnavigator sent us an update. We were delighted to hear from the legendary Webb Chiles, who, after a unique transit of the Panama Canal, is about to embark on the last leg of his sixth circumnavigation.
Sponsored Post
The Cove – Boat Slips Available
To Catch a Thief
Have You Seen This Painting?
"A painting was stolen from the hallway at 125 Park Place in Point Richmond where I have my frame shop," says Pam Delaney, the daughter of artist Jim DeWitt.
Resourceful Sailor
The Gennaker Tack, Part 1
I had been sailing Sampaguita, my 1985 Pacific Seacraft Flicka 20, for five years with a tedious setup for the gennaker, which meant I would rarely use it.
More 'Lectronics »
Report Listing