The North Pacific Subtropical Convergence Zone, often referred to as the Pacific Gyre, consists of a sea of floating plastic material — various bottles, plastic chairs, packaging straps, buckets, rope and fishing nets. Several efforts have been undertaken recently to try to rid the Pacific Ocean of this debris. Mary Crowley’s Ocean Voyages Institute (OVI), based in Sausalito, is fostering one such effort.

“A prime target for OVI’s 2019 voyage was the fishing gear called ‘ghost nets’,” says OVI. “Often weighing tons, these massive nets of nylon or polypropylene drift for decades, amassing plastic debris, ensnaring wildlife, and even entangling ships. An estimated 600,000 tons of this abandoned gear ends up in the oceans every year. According to the United Nations, some 380,000 marine mammals are killed every year by either ingesting or being caught in it.” 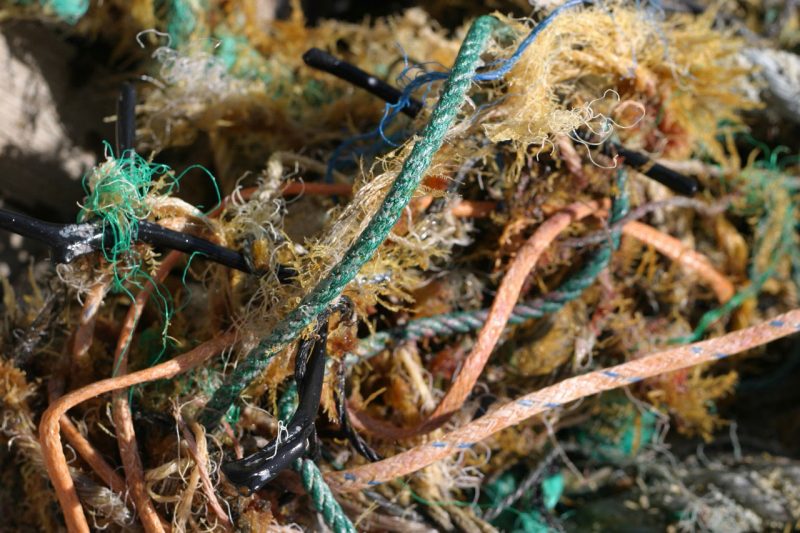 OVI recently finished a 25-day cleanup effort, amassing approximately 40 tons of fishing nets and consumer plastics from the Gyre. Unique in their efforts are the use of an environmentally friendly sailing cargo vessel, the S/V Kwai (crewed primarily by Polynesians) and bowling ball-sized GPS trackers. If funding objectives are met, OVI believes 400 to 500 tons can be collected given an extra 40 to 50 days in the Gyre.

“The technologies do work, and now it’s just a matter of getting the funding in place. And this is something that can be replicated — worldwide. It’s only a matter of time before we see dramatic results,” says OVI’s director, Ryan Yerkey.

“It is very disturbing to be sailing through what was only decades ago a pristine ocean wilderness and find it filled with our all-too-familiar garbage,” says Crowley. “Urgent action is needed at all levels: curtailing the manufacture of throwaway plastics, preventing plastic trash from entering the oceans, and enlisting the public, corporations and the maritime industry in education, prevention, innovation and massive cleanup efforts. The question is, are we ready to make it a priority to protect 72 percent of the planet?”

Receive emails when 'Lectronic Latitude is updated. SUBSCRIBE
'Lectronic Latitude: Monday, Jul 1
I need a new Latitude
July Issue Out Today
The July issue is quite possibly our favorite Latitude 38 ever — especially Letters, which also has a sober discussion about readers' run-ins with white squalls, a continuing debate about the Oakland Estuary, and lots of musings about people's first boats, best boats, and last boats.
Hurricane Hideaway
Red Frog Beach Island Resort & Marina
Red Frog Beach Island Resort & Marina, the ultimate hurricane hideaway and Caribbean cruisers' playground.
Tokyo 2020 Games
Tickets for the 2020 Olympics
With just over a year left until the Opening Ceremony in Tokyo, tickets will go on sale July 9 for the 2020 Olympics.
There's No Port Like Newport
When West Meets East, Part 3
The breeze in Newport, Rhode Island, was 10 to 15 knots, when it wasn’t 18 to 22.
More 'Lectronics »