When we first met him, Barry Spanier exuded passion about all things sailing and the ocean. A Bay Area native, Spanier sailed out the Golden Gate in 1975, went on to cruise the South Pacific, shipwreck, live in the jungle in Tahiti, forge a friendship with Bernard Moitessier, and eventually settle in Maui, where he became one of the most sought-after windsurfing sailmakers. Spanier is currently building the Rosie G — a unique cruiser that he’s been mulling over for decades — at Berkeley Marine Center under the expert eye of master boatbuilder Cree Partridge.

Spanier also has his sights set on one of the most pressing environmental issues of our time: plastics in the ocean. Spanier conceived of a boat called the “Baleen” (also known as Ships that Scour the Sea), named after filter-feeder whales.

“The ships [would] function as laboratory stations, observation posts and for teaching experience,” Spanier wrote on his website, pondering the positive side effects that building the ‘scourers’ could have. “Rebuilding the steel industry. Rebuilding ship building. Employing thousands. Crew service is equivalent to military. We know youth are desperate to be working at something meaningful to humanity and the planet. In full swing, there are 250 ships, each costing $50 million or less. Fifty ships scour each known gyre following coordinated GPS guidance.”

When we met up with Spanier at BMC back in April, he said, “Baleen is where my big intention is now. We can do this. Shit, Larry Ellison could do it with pocket change.”

Spanier believes that the boats can effectively power themselves with the trash they collect, given advancements in plastic to diesel technology. “Gasification converts one ton of matter into one megawatt of power,” Spanier wrote. “This runs the ship systems and power train. With battery storage walls or hydrogen fuel cells, it can store power for other electric vessels.” 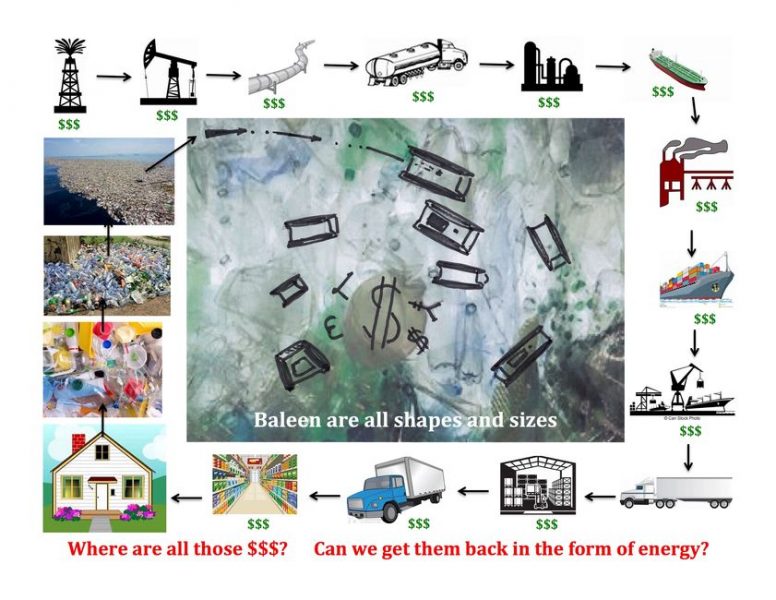 We’ll have more on some of the different — and often competing — ideas for cleaning up the ocean, and preventing trash from getting there in the first place, in the July issue of Latitude 38.

Receive emails when 'Lectronic Latitude is updated. SUBSCRIBE
'Lectronic Latitude: Wednesday, Jun 5
Eight Bells
The Legend of Lowell North
Lowell Orton North, the founder of North Sails, Olympic gold medalist, and sailing icon of his time, passed away on Sunday. There will not likely be another sailor like Lowell North. He was 89 years old.
The Light Gets Lighter
Carbon Is the New Black
On the windward shore of the Big Island [meaning California], a stone's throw from the cool Monterey Bay trades, unfolds the all-new Antrim 27 ‘C’. Number 28 (27 were built by USI) is now under construction by builder Joe Kitchell.
Washing Waxing Varnishing
Westwind Boat Detailing
Westwind Washing, Waxing, Varnishing. Serving the Bay Area for more than 25 years.
Santa Cruz Sailor Tops Fleet
Americans Win Euro Cup
On June 1, the American team of Mike Holt and Carl Smit won the 51-boat 5O5 Euro Cup Riva del Garda, the second leg of the Euro Cup series. Sailed at Fraglia della Vela Riva on Italy's Lake Garda, the regatta came down to the last leg of the last race.
More 'Lectronics »
Report Listing