In an era when it feels as if we’re turning back the clock in many unfortunate ways, we paused on Sunday to appreciate some of the beauty from the past. Last weekend’s Master Mariners Wooden Boat Show demonstrated the everlasting beauty of wood, brass and traditional-design elegance, cared for by loving owners.

The annual event gathers many of the Bay’s most cherished wooden boats and puts them on display at the Corinthian Yacht Club in Tiburon, where the public can step aboard and explore the well-cared-for vessels. The event is also a fundraiser for the Master Mariners Benevolent Association’s charitable efforts to provide education and opportunities for future generations of craftspeople.

Being a judge is rarely an easy job, and trying to pick a winner from among these classics must be one of the most difficult tasks anywhere. Regardless, judges and the public managed to reach an agreement on some well-deserved winners.

The Stone Cup is awarded to the Best of Show and professionally-done restoration. The winner was Mark Sander’s Nicholson ketch Hurrica V.

The Corinthian Cup is awarded to Best of Show — owner-maintained (sweat equity) — and this year went to the front-row beauty, the 51-ft Sparkman & Stephens design Kay of Gõteborg, owned by Neil Gibbs.

The Al Lutz trophy recognizes the classic that went through the biggest change in the past year. This year’s winner was KC Crowell’s Bear Boat, Chance, which we happened to feature in our May issue.

The People’s Choice is awarded in a clean, fair, and democratic voting process by the public and CYC members. There’s no lobbying, no gerrymandering, and it’s essentially a pretty chill process. The overwhelming result was again the Stone Cup winner, Mark Sander’s Redwood City-based, Hurrica V.

The show happened to be held on the 12th anniversary of Al Lutz’s passing. Al was the much-loved skipper of the scow schooner Alma for 17 years. The Al Lutz award continues to bring Al’s spirit and energy to every show.

While many of our newest, sleek boats on the Bay are made of carbon, all these boats keep track of their age with carbon dating. Some are over a century old and have been rebuilt several times to keep them afloat, looking good, and often very competitive on the race course. They carry with them the stories of generations as the foundation of the formative years of Bay Area recreational sailing. It takes love, commitment and money for us all to be able to appreciate the boats from our past that still sail the Bay.

The show is over, but you’ll have the opportunity to cross tacks with the classic boats while sailing the Bay and, if you missed it this year, look for the wooden boat show around this same time in June 2023. It’s worth a visit.

Welcome to Good Jibes, Episode #46. This week’s host, Moe Roddy, chats with Kimberly Paternoster and David Parker about the sailing couple’s shared love of music, cooking, and cruising the world together. Kimberly has been sailing since she bought her first boat in 2003 and is said to be the only woman who’s ever righted an AC45. David has raced for over 25 years, including multiple Rolex Big Boat Series wins and two podium finishes in the Pacific Cup.

Hear what it takes to live full-time on your boat; how to work from anywhere while cruising; about sailing lessons they learned from cooking and music; about the boats they love the most; and where they’re off to next. This episode covers everything from finding your sailing soulmate to racing tips.

Here’s a small sample of what went on in this episode: 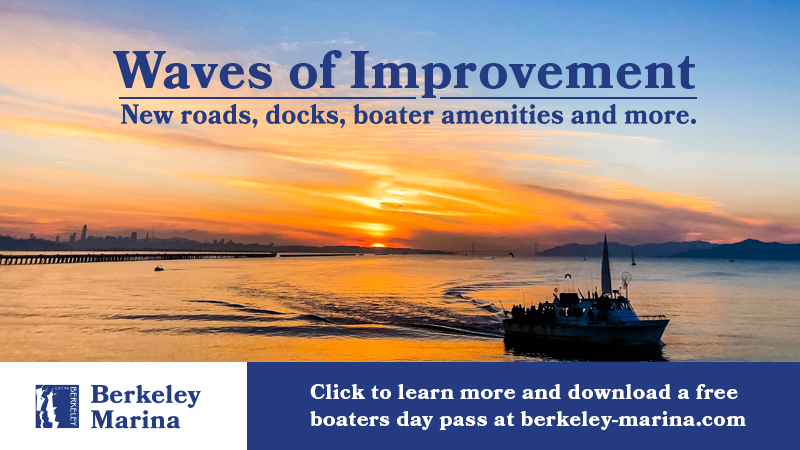 The upcoming three-day Fourth of July weekend is, of course, another great sailing opportunity, and a chance to put on your sailing “formal wear” by flying your colors. Flying your US nautical ensign or US national flag is a way to “dress up” for your upcoming weekend or Monday sail. Send us your best sailing shot for our July Sailagram.

In the early days of Latitude 38 magazine, all the photos of colorful flags were printed in black and white.

If you’re going to be out this weekend, show us what you’ve got. This year there will be plenty of fireworks around the Bay. San Francisco’s show starts at 9:30 near Pier 39, Sausalito fireworks kick off at 9:15 p.m., and Richmond will host a Third of July fireworks show.

It’s a three-day weekend to sail and show your colors. See you out there.

They’re Off to Hawaii!

The Pacific Cup and the Vic-Maui Race both start during the first full week of July. The Pacific Cup will take 60+ boats from San Francisco to Kaneohe Bay, on the east side of Oahu, with starts on July 4, 5, 7 and 8. We preview the Pac Cup in the July issue of Latitude 38, coming out this Friday, July 1.

Twelve boats will set sail from Victoria, BC, to Lahaina in the Vic-Maui, starting on July 4 and 6. Among the boats that caught our eye on the entry list is Doug Baker’s Kernan 68 Peligroso, hailing from Long Beach.

Old salts will remember the days when the YRA took July off. Those days are long gone! The action continues to heat up all through the summer. Case in point:

After a two-year pause, the Westpoint Regatta is on for July 16. Organized by the YRA and supported by The Club at Westpoint, Treasure Island Yacht Club and Sequoia YC, the WPR starts at TI and finishes at Redwood Creek after a long downwind run. The Island Time Party follows, with a band, BBQ and awards. Previously hosted at Sequoia YC, this year it will be held at the Club at Westpoint. That club, in Westpoint Harbor, will offer a Sunday morning breakfast to eat in or take to go. This year, TIYC will host a pre-race reception on the Friday before the race, with appetizers and a no-host bar. TIYC doesn’t require an RSVP. Enter the race on Jibeset.

The last of this year’s YRA Weekend Regattas comes up just two weeks later, on July 30. The Encinal Regatta used to be called the 2nd Half Opener, but since the season doesn’t actually take a break anymore, that’s become a misnomer. The race sails from Berkeley to Point Bonita, then finishes with a long run through the Gate, the Bay and the Estuary to finish at Encinal YC, where crews can enjoy the party. Sign up on Jibeset.

The Estuary Extravaganza follows the Encinal Regatta on Sunday the 31st, with short-course racing.

Although the YRA’s Summer Series and Sunday Shorthanded Series do take a break in July, the OYRA offshore series does not. On July 9, the OYRA fleets will race to Half Moon Bay, then on July 23 it’s the Jr. Waterhouse. Single-race entries are welcome, but save $10 by signing up at least five days in advance.

Boats will pursue one another from Raccoon Strait to Carquinez Strait and back in San Francisco YC’s Midnight Moonlight Maritime Marathon on July 9.

On July 23, Bay View Boat Club in San Francisco opens up the Plastic Classic to fiberglass sailboats of 1960s through 1997 vintage.

For the boardsailing crowd, St. Francis YC will host the SF Classic & UN Challenge on July 23-24.

Take to the Lakes

Tahoe YC’s Trans-Tahoe Regatta will offer buoy races on Friday, July 8, and a long-distance race on Saturday the 9th.

Fresno YC’s High Sierra Regatta includes two weekends of sailing on Huntington Lake. July 9-10 is for the centerboard crowd (register by July 1); keelboats will get their own weekend on July 16-17 (register by July 8).

Lake Merritt Sailing Club’s 60th annual City of Oakland Mayor’s Cup Regatta will sail on Lake Merritt on July 10. LMSC is celebrating their 85th birthday this year, and the club hopes to see lots of sails on the starting line. Usual fleets include El Toros and Sunfish. This year, the regatta will serve to kick off a new Summer/Fall Regatta Series. LMSC doesn’t have a website; for info contact the commodore, Denis Hazlewood, by email or at (707) 338-6955.

Monterey Peninsula YC will take their turn hosting the Santana 22 Nationals on July 23-24.

San Diego YC will host the Snipe Nationals on July 11-15. Four full days of racing will pair up with five days of on-land festivities.

The Santa Barbara to King Harbor Race will be held on July 29-30. King Harbor is in Redondo Beach.

Pacific Corinthian YC in Oxnard will put on the McNish Classic on July 30.

As usual, this list is but a sampling of the regattas on offer up and down the West Coast. For many more, see our Calendar, coming out in the July issue of Latitude 38 this Friday. 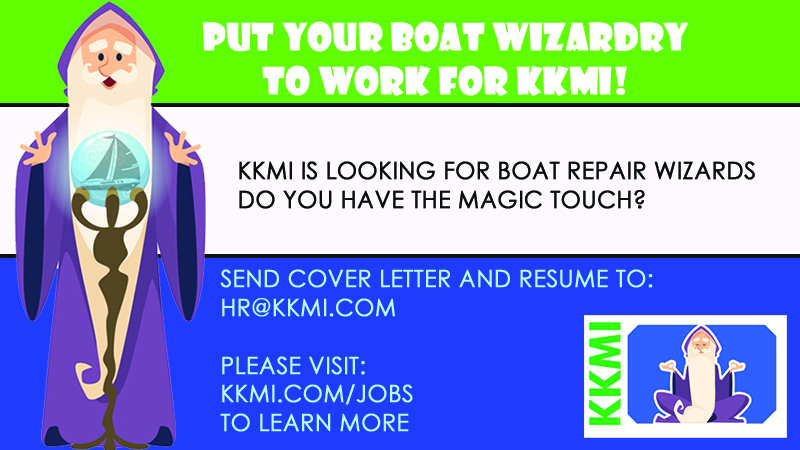 SHARE ON Tweet Share Email Linkedln
Receive emails when 'Lectronic Latitude is updated. SUBSCRIBE
'Lectronic Latitude: Monday, Jun 27
Sun, Wind and Waves
Lively Return for Long Beach Race Week
Conditions were everything sailors had dreamed of and hoped for during the three-year wait for the return of Ullman Sails Long Beach Race Week.
Remembering a Wooden Boat
Looking for the Lost Bear Boat ‘Nanook’
After reading about Bear Boats in a recent issue of 'Latitude 38,' Geoff Capell sent us a letter outlining the history of, and his search for, 'Nanook.'
Sponsored Post
Ownership Opportunities on the Sea of Cortez
Meet the worldly, Casa Blake, a new ownership opportunity in the heart of the Costa Palmas Marina Village.
Royal Yacht Squadron
Roving Reporter Larry Haynie at the Royal Yacht Squadron’s Cornerstone Cup
As Larry reports, the yacht clubs across the pond are full of pomp and circumstance with many club members sporting blazers, white slacks and officers' caps, and every event capped with tea.
What Do You Know?
Latitude 38 Question of the Month Answered
Not all the photos in the issue were color; the half dozen on pages 100 -101 were a test run.
Sponsored Post
Learn How Your Actions Can Protect Our Bay, Ocean and Wildlife
Environmental Health Services works to ensure a safe and healthy environment in San Mateo County through education, regulation, and monitoring.
More 'Lectronics »
Report Listing