Latitude 38‘s illustrious publisher is currently in Maine, where each year he catches up with family and friends and enjoys the contrasting sailing waters upon which he grew up. He sent us this ‘postcard’ …

We were lucky to grow up learning to sail on the coast of Maine and manage to get back each summer for an annual family reunion. This year is no different — almost. The pandemic oppression has lightened up, but not as much as hoped. Still, the coast of Maine remains an incredible place to sail in the summer.

Although we traveled 3,000 miles to the east, some of the West followed us, with smoke from the western states’ fires giving us a few extra-red sunsets and an AQI of about 150 on our second day after arrival.

Fortunately, the NW winds returned to blow the smoke away. When the smoke cleared, the damp, lush East demonstrated the sharp contrast to the dry West. While the West has been baking, Maine has been experiencing a cooler, wetter summer, though still with enough sunshine for most summer visitors.

Maine is typically calmer sailing, with daily southwesterly winds that show up most afternoons as the land heats up. But unlike the Central Bay, the winds are often 8-12 knots and might top out at 15 knots of warm, flat-water, summer breezes.

If you include the thousands of islands and inlets, the Maine coast is longer than the California coast, although its three-month summer season is far shorter. We consider ourselves lucky to enjoy the 12-month California sailing ‘season,’ while also fitting in a summer sailing escape to Maine. If you’ve never sailed Maine it’s worth the trip — as long as you come in the summer.

If you want to read more about Maine, take a look at Tim Henry’s account of his visit ‘over East’ in 2019: When West Meets East.

The August issue of Latitude 38 hit the docks on Friday, just in time for a good weekend of reading — while on the water, of course. One of the stories that intrigues us in this issue is Rocket Scientists — Space Age Sailors. Now, as far as we’re concerned, sailing ‘isn’t rocket science’ (to use the widely applicable phrase), unless of course you’re moving into foiling cats or any of the highly technical racing sailboats that dominate events like SailGP and the America’s Cup. But for most of us, sailing is just meant to be simple fun. So how are Rocket Scientists and Space Age Sailors one and the same? Lisa Hotchkiss did some research and shares the stories of three sailors who blend rocket science and sailing, and have fun doing so.

Not to question the inimitable James T. Kirk, but is space really the final frontier? For some satellite engineers with ties to Bay Area sailing and one another, space and sailing seem to go hand in hand.

Dan Newland became a self-proclaimed space nerd early on, as his Houston high school was across the street from NASA, and many of his sailing buddies had NASA associations. His daily school bus route passed by Neil Armstrong’s home, and his best friend’s father was Donn Eisele Sr., who flew on Apollo 7.

In addition to keeping “piles of everything NASA would send out,” young Dan was also obsessed with building. Fortunately, his parents supported their son’s “hobby” by providing whatever materials he needed for his various projects. “I built my first model airplane before I could read, and took my first flying lesson and landed a plane when I was 9.”

Dan built his first boat at the age of 12 and started sailing at 13 at the Houston Yacht Club, first racing on Pearson Ensigns and later crewing on destination races to Corpus Christi, Biloxi, MS, and beyond. He continued building boats after a couple of years of college in Texas, but moved to Folsom, CA, where he could sail (racing 5O5s) and pursue his new passion of downhill skiing. He bought a sewing machine and some sailcloth and taught himself sailmaking as a hobby, but found that he started winning with his own sails. Jim DeWitt of DeWitt Sails (now Quantum) hired him and prompted the fortuitous move to the Bay Area, where his racing circles broadened to include local sailing legends Stan and Sally Honey and Dennis Surtees.

Go to Latitude 38 to continue reading about Dan and his fellow space age sailors, Bud Fraze and Patrick Lewis. 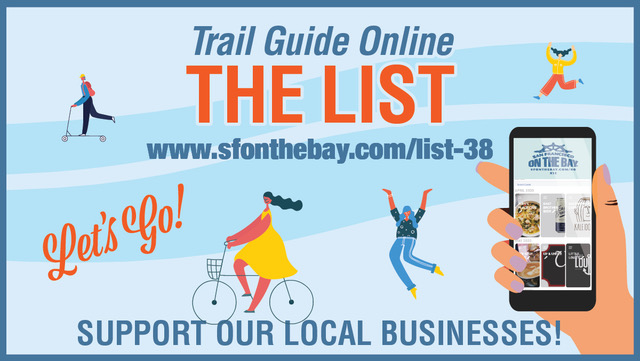 Right now we’re about halfway into the official summer season. Although sailors in many parts of the Bay Area might be wondering how that can be so, as we’re still waking up nearly every morning to fog and temperatures in the low 60s. But let’s face it, that’s our weather. Mother Nature clearly doesn’t have a calendar, or if she does, she sees no reason to abide by it. The hot weather arrives in late August, just as the official seasons are transitioning to fall. So while we were thinking about the temperatures, we thought we’d flash back to the season’s opening day, June 20, and the Summer Sailstice sailing celebration that takes place every year on the weekend closest to the Northern Hemisphere’s summer solstice — because guess what? It looked cold then too!

Chris & Marissa, aboard Avocet, were valued ambassadors and worked hard to get more people sailing on the Sailstice. In true ambassador fashion, they headed out with a small fleet of friends to enjoy the sail and weekend together.

It was the Summer Sailstice, a day to commemorate the solstice and enjoy the extra hours of light on the water with the wind in our sails. Chris and I were honored to be ambassadors for the organization and had done our best to inspire people to get on the water in any way possible.

You can read more about Avocet‘s summer sail to the Channel Islands here.

Three classes of sailing will compete today (August 3 in Japan) at the Olympics, including the Nacra 17 medal race. Riley Gibbs (Long Beach) and Anna Weis (Fort Lauderdale, FL) earned their medal race berth after a strong performance on the final day of qualifying races. The first-time Olympians and Pan American Games gold medalists are mathematically eliminated from medal contention in Tokyo. They’re in ninth place overall.

In the Laser, two-time Olympian Charlie Buckingham (Newport Beach) started July 30 in 8th overall, poised to fight for a medal race berth during races 9 and 10. The previous day, Buckingham had orchestrated one of the best days of his sailing career, earning a 3, 2 to vault himself into the top 10. However, a treacherously light-air day on the Enoshima course led to two races where many top Laser athletes found themselves deep in the pack. Buckingham’s 16, 23 scoreline on Friday left him in 13th overall, just shy of the medal race field, and ended his regatta.

On Saturday, 49erFX athletes Stephanie Roble (East Troy, WI) and Maggie Shea (Wilmette, IL) competed in the final three races of the 12-race qualifying series. Roble and Shea entered the day in sixth overall and 15 points from third. The final races of the qualifying series would determine who would finish in the top 10, and advance to the medal race, and be within reach of the podium.

All courses on Saturday experienced a patchy 5-9 knots of wind with significant current. Despite the difficult conditions, Roble and Shea had a strong start in race 10, but finished 14th after receiving a career-first yellow flag penalty from the umpires for a Rule 42 breach for improperly moving their bodies to propel the boat in the very light conditions. In the second race (Race 11), the Americans again started strong, but touched the first mark as they were rounding in seventh place.

“After hitting it, we were working to get around the mark as the whole fleet was right there,” said Shea. “We didn’t want to get tangled up on the mark and cause a pileup. We wanted to get out of the way. We got around the mark, and immediately started spinning [a penalty-clearing 360° turn]. In the process of spinning, the umpires flagged us again for what we thought was hitting the mark. We were already spinning for hitting the mark, and kept sailing once we finished, thinking we were clear.”

Roble and Shea crossed the line eighth in Race 11. But the umpires informed them that they had been scored DNE for both incurring a second yellow-flag penalty for Rule 42 and for failing to retire from the race.

“We told the umpires that we spun for hitting the mark,” said Shea. “We and others that I’ve spoken to assumed that they were flagging us for hitting the mark. We knew we hit it, and we were in the process of getting out of the way of the fleet in order to spin.”

A strong fifth-place finish in Race 12 came next. It would have left Roble and Shea in medal contention if the Race 11 score had not been converted from an eighth into a non-discardable DNE (disqualification non-excludable). Instead, Roble and Shea placed 11th overall, three points short of advancing to the medal race.

Racing will continue through August 4. For information about how to watch video coverage of the sailing, see www.ussailing.org/olympics/tokyo.

By the looks of the photos we received this month, Latitude Nation had a great July on the water. Thank you for sharing your time on the water with us. Want to be included in the next edition of Sailagram? Email your photos to [email protected] Happy Sailing! 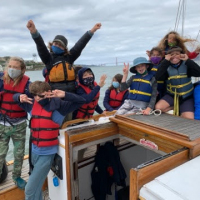 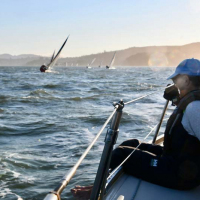 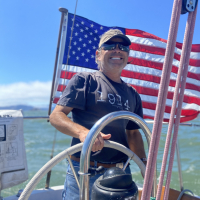 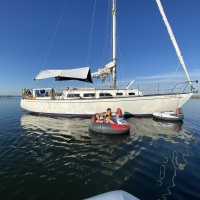 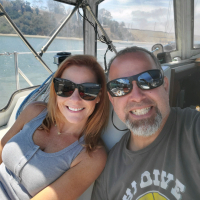 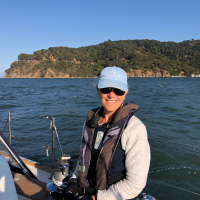 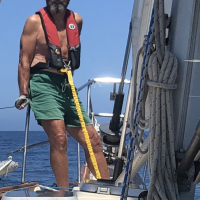 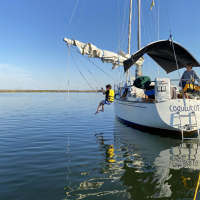 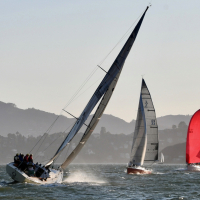 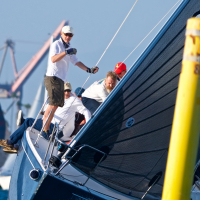 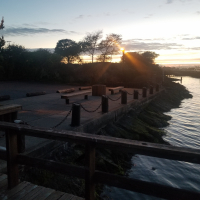 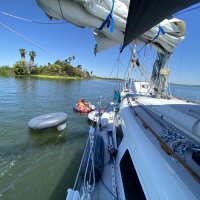 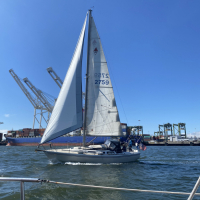 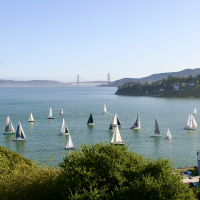 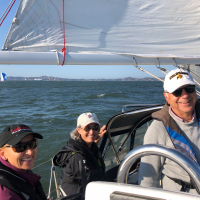 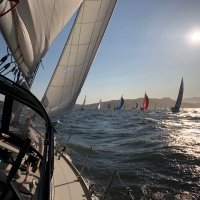 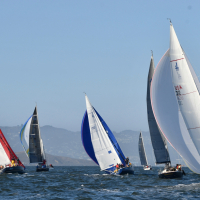 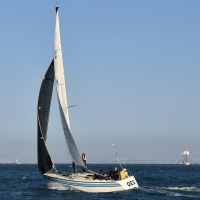 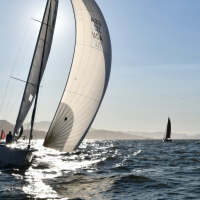 1 2 3 ►
SHARE ON Tweet Share Email Linkedln
Leave a comment
Receive emails when 'Lectronic Latitude is updated. SUBSCRIBE
'Lectronic Latitude: Friday, Jul 30
Yacht Delivery from Kauai to San Francisco Bay
The Return of the (Green) Buffalo
After 16 days and plenty of fresh albacore, Jim Quanci and his crew returned Green Buffalo to her slip at Richmond Yacht Club.
The Best in the West
Latitude 38’s August Issue Has Arrived!
As usual, we have a magazine full of great stories and photos for you to read and enjoy.
Sponsored Post
San Francisco on the Bay: Dock, Dine, Stay, Play
Discover San Francisco Bay and all that inspires those of us who live or visit here.
A First-Time Adventure
Coquelicot’s Debut Cruise in the Delta
Our first Delta trip was amazing. We had such a great time. Warm, fresh water; warm nights.
The Latitude Movie Club
‘All Is Lost’ Is All but Universally Despised by Sailors
As fun as it is to disparage a film, it's easy to lose sight of the hard work, sacrifice, and personal passion that goes into making movies.
Recognizing the Signs
Join the National Hurricane Center’s Weather Forecasting Webinars
The National Hurricane Center is hosting its second annual live webinar on weather forecasting geared toward blue water mariners.
Sponsored Post
Climb Aboard for Latitude 38’s September Crew List Party!
An evening of fun, merriment and general chit-chat about everyone's favorite topic.
More 'Lectronics »
Report Listing