If you were fortunate enough to have access to a sailboat this past weekend, San Francisco Bay was the place to be. Lots of people agreed, as the only-somewhat-cooler temperatures on the water and mostly gentle breezes inspired them to cast off the docklines. It was simply the best you could do to avoid the heat-wave swelter ashore.

Saturday was a pleasant prelude to a wild and electrifying Sunday morning, when rare lightning, wind and rain appeared across the Bay. We were happy not to have the tallest stick in the harbor that night. As far as we know, it all passed without too much damage on the waterfront before clearing again for another warm Sunday afternoon. The heat wave looks likely to continue right through next weekend. If you’re lucky, you’re one of those who don’t have to wait until next weekend to sail again. It will be nice all week long. If you were out and have some sailing shots to contribute, please send them to editorial@latitude38.com.

With the Treasure Island Sailing Center’s youth summer camp coming to an end, you would think their hard-working staff might choose to take a breather. After all, it has been a tricky summer season for both kids and staff to navigate. Social-distancing rules and safety provisions have meant that classroom activities have had to move outdoors — even throughout some of San Francisco’s hotter days. The kids have had to spread out a lot more, and, well, how do you stop kids from being the touchy, boisterous and social people they are?

But TISC staff Laura DeFelice and Hana Kim Rupnow have shown no signs of wanting to luff their sails. As TISC’s program manager and STEM educator, respectively, they’ve taken youth participants around the Bay, despite the pandemic — through “field trips” that teach navigation and seamanship.

As part of a recent field-trip filming session, I was invited to play “Captain Kai,” a sailor with a less-than-convincing resemblance to the notorious Captain William Bligh of Bounty fame, albeit far more likable (hopefully). Hana Kim explained that she chose the name Kai, not for its rhyming with “Bligh,” but because it means “sea” in the Hawaiian language. With the exception of my homemade period costume, it all clicked.

Of course, a TISC field trip wouldn’t be complete without actual sailing. From TISC’s fleet of boats — ranging from Optis to J/24s — I requested “whichever one is quickest to rig, quickest to get out there.”  We scooted over to TISC’s nine-strong fleet of Laser Performance Bugs, 8.6-ft rotomolded plastic bathtubs that require nothing more than plugging a mast and boom into the deck by hand, then lashing the whole lot together.

While Sailing World has previously dismissed the Bug as “too small for adults to sail,” I can tell you that’s not true. Perhaps too small to sail without immediately getting a wet backside, but ducking the boom doesn’t require any real gymnastics either. Furthermore, the Bug’s cockpit comes with a built-in beverage holder, a feature of the most respectable pleasure craft.

Off the dock, it was a joyous couple of tacks over to Clipper Cove’s “beach” — a hidden gem in the City — where we would film some of our field trip segments. The Bug moved effortlessly in light air when I shifted my weight to the low side; it was simple and intuitive, the most carefree sail I’d had in a long time.

After filming had wrapped up, the TISC team invited my husband to also take a turn at the helm. Made brazen by my experience, I bundled myself under the boom — “where the kids sit as crew,” Laura explained — and sat backward in something like the Happy Baby yoga pose. With the Bug’s optimum crew weight being in the range of 66 -154 lbs we weren’t optimizing for hull speed, but she still managed to canter around under our combined 310lbs.

After hauling out our tiny launch, I got to business with Laura. I was like a kid looking headily at their last days at summer camp, not wanting it to end. “Can’t we host a Bug regatta here on Clipper Cove?” I pleaded. “It would be safe and LOTS of fun!”

Laura smiled serenely and said she would consider it. And hopefully, with that, the deal was done. After all, I could tell that both she and Hana Kim have the small boat sailing bug too. 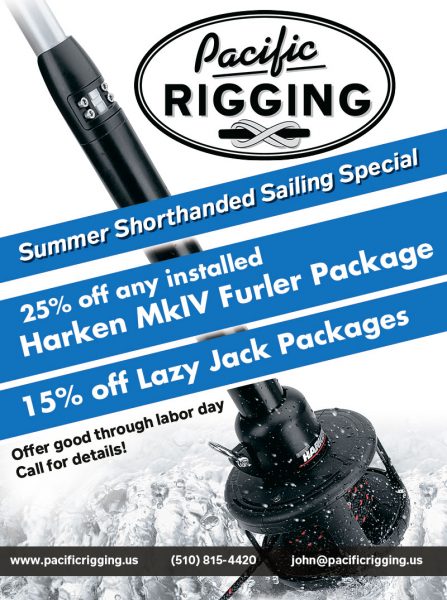 This November, Bay Area residents living in Ward #1 of the East Bay Regional Park District (EBRPD) will have an important ballot choice to make for the director of that ward. That seat was held for many years by Whitney Dotson, with whom I worked to accomplish the Pt. Isabel Regional Shoreline Park’s Launch Improvement Project, completed in 2019.

Director Dotson retired late last year, leaving his seat open. The EBRPD Board considered four candidates for appointment to his remaining term and chose Elizabeth Echols. Notably, that was the second time her main opponent in the upcoming election, Norman La Force, was passed over in seeking a director seat on that board.

I won’t reiterate all the concerns being raised in the park-user community around this election, but instead will emphasize how Elizabeth Echols has successfully stepped into her role as Ward #1 director. Specifically, she was a champion for reopening parks for people seeking some relief from the shelter-in-place restrictions of the local health authorities — while ensuring appropriate mask wearing and social distancing.

I’m encouraging everyone who cares about recreational use of SF Bay Area urban parks to get involved in this election. Even if you aren’t in Elizabeth Echol’s ward, you can still express support through Facebook “likes”, donations, endorsements, or other opportunities for involvement with her campaign.

It’s clear to me that we already have a strong and effective advocate on the board for public access to and recreational use of our important urban parks. My sense of Elizabeth’s ability to get things done is buttressed by the unanimous endorsement of her current co-directors on that board. Notably, she is also endorsed by the Park District employees’ union. She is clearly a consensus builder.

Let’s ensure Elizabeth Echols keeps working with and for us all. She has demonstrated her intention and ability to do so.

The pandemic has led to regatta math: there’s been a lot of subtraction, but also some addition.

The Pluses in the San Francisco Bay Area

The Corinthian Yacht Club will host the Pandemonium Regatta on August 30, a one-day doublehanded event for one-design boats. There will be recognition for the overall winner as well as mixed-gender teams. Bruce Stone will be competing with his J/105 Arbitrage. “Our objective in working with Corinthian Yacht Club is to offer chances to build experience with a training partner,” he said.

“If we have a great turnout, we’ll go for longer lengths a month from now. In this iteration, there will be a long course of around 25 miles for J/105s and J/88s; a medium course for Express 27s and J/70s; and a shorter course for smaller boats like Knarrs, Cal 20s, J/22s and J/24s. The start will be off of the west end of Angel Island.” The route will go just north of the Richmond Bridge followed by a beat out the Gate to Point Bonita and a spinnaker run to the finish at CYC in Raccoon Strait.

The OYRA has canceled its participation in this weekend’s Drake’s Bay Race, but the Singlehanded Sailing Society has figured out a way to hold the two-day event and opened registration over the weekend just past. This will be for singlehanded and doublehanded entries.

Updated Tuesday, August 28: The SSS will hold an online skippers’ meeting via Zoom on Thursday, August 20, at 7:30 p.m. (not on Wednesday as previously stated in the Sailing Instructions). Registration will remain open through Thursday. Racers will need to take their own finish times on Saturday and start according to the published starting sequence on Sunday, as there will be no race committee on station in Drake’s Bay.

Speaking of the SSS, they posted preliminary fleet results for August 8’s Round the Rocks over the weekend. We suspect that at least some of the ‘DNF’ (Did Not Finish) scores will be updated with finish times before the results are made final. Look for more on that race in Racing Sheet in the September issue of Latitude 38.

Long Beach Yacht Club has confirmed they will host the 2021 Seawanhaka International Challenge Cup on June 2-5. LBYC won the Seawanhaka Cup in 2019 sailing  in Match 40s in Oyster Bay, NY. The Cup is “a historic international challenge for the purpose of promoting small yacht racing and developing the Corinthian spirit among competing yachtsmen.” (And, presumably, yachtswomen too.)

But Subtract These in Locales Near and Far

“South Beach YC and Benicia YC regret to announce the September 5th Jazz Cup Regatta is canceled,” writes Patti Mangan of SBYC. “Everyone please stay safe, stay well, and we will see you in 2021!”

2020 Melges 24 US National Championship, originally scheduled for October 15-18 at Tred Avon YC in Oxford, MD, has been canceled due to regulations limiting the size of events.

The Bahamas had originally planned to host the 2020 Star World Championship on January 31-February 8. But the impact of Hurricane Dorian on that region moved the event to Miami, FL, on November 13-21. Now it’s canceled due to health restrictions.

SHARE ON Tweet Share Email Linkedln
1 Comment
Receive emails when 'Lectronic Latitude is updated. SUBSCRIBE
'Lectronic Latitude: Friday, Aug 14
A New One-Design Class Racer
The Next Big Thing in Sailboats Isn’t Big
A yacht design icon and a construction icon will take a mid-size boat to Moore races in Moore places. “It’s going to be a sexy Italian-inspired hotrod!”
COVID Threatens Local Camp
COVID-19 Pauses Local Sailing Camp
Recently a participant in Call of the Sea's “Young Salts Adventure Camp” program tested positive for COVID-19. The person had shown no symptoms and was tested along with the rest of his family as part of their own precautionary protocol.
Sponsored Post
Compass Realty – 27 Bellevue Avenue
Expansive water and San Francisco views are the star in the spacious great room, featuring a custom kitchen, dining, sitting, and game area.
Cruising South of the Border
Welcome to the Mexico Cruisers Fence-Sitters Survey
Yacht clubs are wondering whether to run races, junior sailing programs are navigating proper protocols, boat shows are being postponed and racing has been severely curtailed. And the Grand PooBah is holding off until October 1st to decide on whether to run the 27th annual Baja Ha-Ha.
Mark Your Calendar
National Rum Day Is This Sunday
Even when San Francisco's summer chill returns, sipping a rum cocktail will conjure images of swinging in a hammock in a tropical anchorage.
Last Call for Classy Ads
Boats Are Selling: Classy Classified Deadline Tomorrow!
If you are Buying or Selling, visit Latitude 38’s NEW Classy Classified page. The deadline is TOMORROW, Saturday, August 15 at 5:00 p.m. for the September issue.
More 'Lectronics »
Report Listing