Krista Swedberg caught the sailing bug early. Starting out as a little girl aboard her parents’ Santa Cruz-based Islander 40, she remembers trips every summer south to Monterey and north into the Delta. “My first few summers were spent in a five-gallon bucket on hot days up the river, which apparently kept me very entertained” she remembers.

In 2001, the Swedberg family participated in the Baja Ha-Ha, which led to several winters of cruising in Mexico.

With the sailing/cruising hook firmly set, Krista got a captain’s license when she was 19, which led to a position with Pacific Yachting and Sailing, a Santa Cruz-based sailing school and charter company. She did varnishing on the side. Glad to be back outside, sailing and working on boats, before long, she was itching to cross oceans again. For this young cruiser, that led, in a rather circuitous manner, to tall ships.

At the suggestion of co-workers, she sent letters out to various tall-ship programs. One encouraging response came from Soren Larsen, a Danish-built brigantine currently operating out of Sydney Harbour. Krista booked a one-way ticket and hasn’t looked back.

She is currently sailing aboard the 125-ft gaff ketch Tecla, a converted herring drifter built in the Netherlands in 1915. The ship is owned by a family of four professional sailors, and though technically still homeported in the Netherlands, the ship has been constantly on the move, hosting up to 12 guests and specializing in sailing adventures to the far corners of the globe. Tecla has done one circumnavigation already (in 2014), and before Krista got on in Nome, the ship had done an east-west transit of the Northwest Passage.

With stops in Dutch Harbor and a surprise visit to Krista’s hometown of Santa Cruz, Tecla is currently en route to the Galapagos. After that, it’s south to new adventures, including rounding Cape Horn. By next summer, Krista says the ship will complete a circumnavigation of the Americas.

Look for more of Krista’s tall-ship story in the January issue of Latitude.

The annual West Coast Mexico migration covered in the pages and pixels of Latitude 38 has been on people’s sailing calendar for decades or even a lifetime. For every sailor who participates in the Baja Ha-Ha or other southbound sail, there are dozens more who stay behind and say. “Maybe next year . . .”

Here at Latitude, we’ve watched from the docks as the Ha-Ha fleet makes its way down the coast to gather in San Diego for the kickoff parties and parade. We usually have a small delegation of Latitude crew who travel to San Diego to wave goodbye, no doubt with a good dose of sailors’ envy in their hearts. Occasionally, one of us manages to hop aboard and wave from the deck instead of the dock — but for the rest of us, the work continues as we keep you up to date with the fun in the sun.

Some might say that reporting on the swimming, snorkeling, beachcombing and relaxing can be almost as good as being onboard, as we live vicariously through the adventures of others. In reality however, it stirs the fires and makes us even more determined to hitch a ride on a southbound boat at the next opportunity. This leads us to ponder the idea of visualization. If one spends enough time thinking about, writing about and reading about sailing to Mexico, is it possible to manifest oneself onto a sailboat that’s cruising among the warm, exotic-sounding locations of La Paz or Puerto Vallarta and perhaps island hopping to Isla Espirito Santo and Isla Partida?

Recently, one of our own was presented with the opportunity to spend the winter chartering aboard the local educational sailing vessel Seaward.

What was the response? Well, you might have read our ad this week looking for a new team member. “It’s only for three months!” Said every sailor, ever.

“‘If poet John Milton had ever made it to Puerto Vallarta, he might well have penned a sequel to his epic poem Paradise Lost — this one instead called ‘Paradise Found.'” This is the opening line of a piece written by John Skoriak after he chartered a voyage on Call of the Sea’s schooner Seaward in 2015. Could this have been the catalyst that prompted our office marketing-guru to make the jump? Perhaps. But more likely, it’s simply one of many signs that presented themselves in a series of events that amounted to a serendipitous collusion of Neptune and the sailing gods to lure an otherwise solidly-grounded magazine employee to become . . . what can we say . . . a sailor.

“This is what sailors do,” she added while unsuccessfully stifling the huge grin on her face.

We can’t argue with that. In fact, being a sailor is one of the reasons we all work at Latitude 38. Being the West Coast’s favorite sailing magazine takes hard work, much of which involves going sailing. How could we possibly share with you the nuances of the wind in the sails, the water under the hull and the camaraderie of crewing if we didn’t ever step out of the office to experience these sensations? It would be like asking a child to tell us what it feels like to be an adult.

Still, the conundrum remains: Sailors sail, and when we’re not sailing we’re encouraging everyone to sail. So while we wish our newest — and shortest-staying — team member fair winds and following seas for Mexico, we also hope she will return and once more grace our shores to help us share the stories of the sea with you. 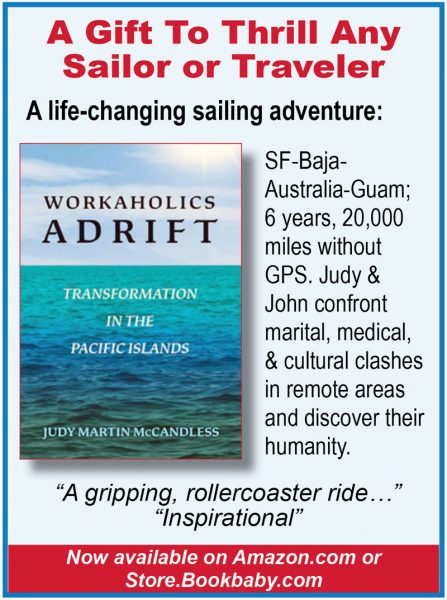 Although the California climate offers plenty of opportunities for winter sailing, many West Coast cruisers flee south to the warmer environs of Mexico and beyond. Another option is to head east. Some Left Coast racers are doing just that.

After a successful debut, the second edition of the Bacardi Winter Series features two events in Miami for the Melges 24 and J/70 fleets with more than 40 teams set for the opener this weekend. The Bacardi Winter Series kicks off on December 14-15 at Shake-A-Leg Miami. The next face-off will unfold on January 25-26 at Biscayne Bay Yacht Club.

“In its second year, the Bacardi Winter Series is already established as must-do events for the Melges 24 and J/70 fleets,” commented Sara Zanobini, director of the series. “This series was launched in response to sailors wanting more winter racing in Miami and has plugged a gap in the market.”

Favorites in the Melges 24 fleet are Bruce Ayers and his team on Monsoon, who will hunt a repeat of last year’s win. The talented Newport Harbor Yacht Club sailors won both winter series events in the debut year, then added the 2019 Melges 24 World Championship silver medal to their awards shelf. Seattle’s Michael Goldfarb and his team on Warcanoe finished fourth at the Melges 24 Worlds. He’ll switch from racing a J/70 in last year’s series. The 2018 National champion Kevin Welch and Mikey will make the migration from Anacortes, WA.

Carrying on the Melges family name is Harry Melges IV, grandson of Buddy Melges. Harry heads to Miami fresh from the 49er Oceania Championship and 49er Worlds in New Zealand. One Canadian and one German team will add international flair to the fleet.

Last year, Geoffrey Pierini and his team on #49 won the opening J/70 event of the Bacardi Winter Series. They will be up against some impressive opponents this year, including Joel Ronning and his team on Catapult, who won event 2 of last year’s Winter Series and claimed the J/70 World Championships silver medal three months ago. West Coast teams in the J/70 class include Jeff Janov and Dave Ullman on Minor Threat, from Malibu. Peter Vesella’s Running Wild and Ryan McKillen’s Surge will sail for St. Francis YC.

“Miami is the perfect playground for winter racing. A strong lineup of well-known stars and Corinthian sailors will face off in the six races this weekend,” said Mark Pincus. The race committee chair added: “Our race management team is super-excited for the weekend ahead.”

After the Bacardi Winter Series, the Melges 24 and J/70 teams will be invited to return to Miami and join the Viper 640 and Star Boat sailors for the Bacardi Invitational Regatta and the 93rd Bacardi Cup on March 1-7. 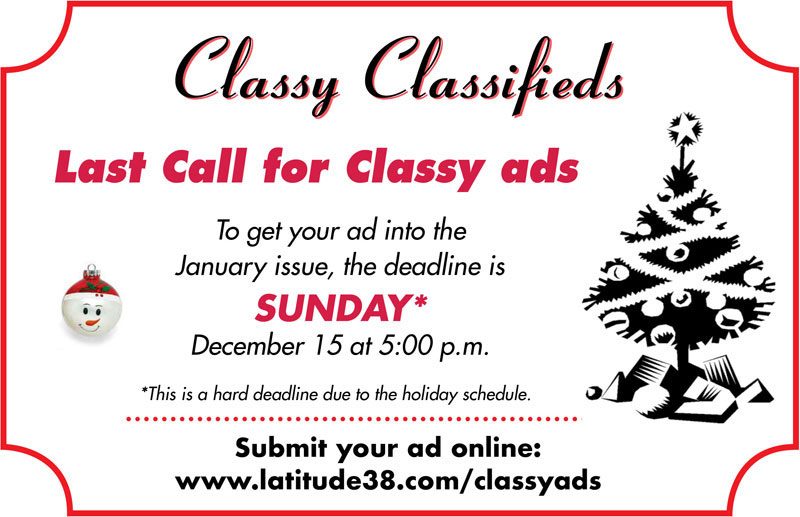 SHARE ON Tweet Share Email Linkedln
Leave a comment
Receive emails when 'Lectronic Latitude is updated. SUBSCRIBE
'Lectronic Latitude: Wednesday, Dec 11
Circumnavigators
Jeanne Socrates Cruises Through the West Coast
One of our favorite singlehanders is on a whirlwind West Coast tour — but not by boat.
Your Caption Here
The World Famous Latitude 38 Caption Contest(!)
Here’s your December Caption Contest(!). Don’t forget to check the January issue’s Loose Lips for the winner.
Sponsored Post
Sail Mexico with Call of the Sea
Sail Mexico with Call of the Sea. Sit back and relax – or help crew the 82-ft schooner Seaward.
Ron Holland Design
Legendary Race Boat Imp Heads to Ireland
In the mid-'70s legendary yacht designer Ron Holland drew up a 40-footer for Belvedere sailor Dave Allen. Holland's then-brother-in-law Gary Carlin built her in 1976 in Florida.
Marketing Assistant Wanted
Job Opportunity at Latitude 38
Latitude 38 is currently looking for an enthusiastic sailor to work with us full-time in our Mill Valley office as an assistant in marketing, communications and events.
More 'Lectronics »
Report Listing