Setting sail yesterday, Francis Joyon has embarked on the second leg of his Asian Tour aboard the maxi-trimaran IDEC Sport. He broke the Mauritius record solo, but a crew of four has joined the French skipper for the attempt to set a record for the passage between Mauritius and Ho Chi Minh City, Vietnam.

“We’ll be heading upwind in the trade winds,” said Joyon ahead of departure. “But after that we are likely to find ourselves in light airs once into the Sunda Strait. We’ll be passing through an area where sailing boats rarely go. I’m pleased that I’ll have a crew with me, as we’re going to have to keep a close watch to get around all the little fishing boats, tree trunks and other dangers that lie in wait. It should take us 16 and a half days of sailing to get to Ho Chi Minh City. It’s a great pleasure for me to set off on this adventure towards places our Western racing boats rarely go. It is with a shorthanded crew, but they work well together. We are really starting a great adventure through Terra Incognita.”

Clipper Round the World

The Clipper Race is diving south of Madagascar into the Roaring Forties. On the fifth day of Race 4, The Marlow Southern Ocean Sleigh Ride, nine of the 11 teams are racing in fast but bitterly cold conditions. Qingdao has taken over the lead from Ha Long Bay, Viet Nam. The skipper of race leader Qingdao, Chris Brooks, is a 33-year-old Brit. He commented: “The red- and gold-laced dragon has awoken and is coming for Ha Long Bay, Viet Nam, as if it were a frightened one-handed Jamie Lannister (for those of you that watched Game of Thrones). Ha Long Bay, Viet Nam is due north of us and the race is very much on.”

Brest Atlantiques Down to Three

The four maxi-trimarans competing in the Brest Atlantiques also called on Cape Town. Two sailed on after rounding the Robben Island course mark. Franck Cammas and Charles Caudrelier on Maxi Edmond de Rothschild lead, followed by Actual Leader 300 miles back. MACIF and Sodebo stopped for repairs. On MACIF, François Gabart commented on this second pit stop: “We had a few problems that made it difficult to maneuver the boat, so we made the most of being near the coast to make a short pit stop. We arrived just as day was breaking in Cape Town. We didn’t have much time to appreciate the beauty around us. We just wanted to set sail again as soon as possible. The good news is that the boat is fully repaired.”

On Sodebo, Thomas Coville noted: “We crossed MACIF as we were arriving. We then checked the damage to our three different rudders.” The Sodebo team announced today that they will not be able to continue the race. A little before arriving in the Forties, they collided violently with a UFO (unidentified floating object).

Each tri is sailing doublehanded plus a media man. If all goes according to plan, the next stop for the three remaining boats will be back at the start in Brest, France.

If you pride yourself on doing much of your own boat maintenance, you probably spend more hours than you’d like to with your head and shoulders squashed into narrow lockers and bilge compartments. But, despite the fact that such physical contortions can give you bruises, scraped knuckles and a stiff neck, there is definitely an upside to inspecting every nook and cranny on your boat.

How so? If you never poke around in the difficult-to-reach areas of your boat, you might not discover ‘little problems’ such as stress cracks, saltwater seepage around deck hardware, or old electrical wiring that’s been compromised — all of which could lead to more complex, expensive and/or dangerous problems if left unseen in the shadows.

In a perfect world, every sailboat would come with a factory-trained maintenance monkey, or perhaps a robot, that could wriggle into those impossible-to-reach areas. But in the meantime, do-it-yourself sailors will inevitably spend time hanging upside down in their bilges fixing known problems and inspecting for new ones.

If you live in the Bay Area, it can feel as if people forget there’s a Bay in the middle of it. Northern Californians seem to spend their working lives ‘in the cloud’ with their hands on a keyboard. What’s often overlooked is the high demand for skilled workers who know how to work with their hands and can service the numerous recreational and commercial vessels on the Bay. In fact, one of the great laments of Bay Area marine businesses is the lack of people available for all kinds of jobs in the marine trades — from sailmaking to engine or refrigeration repair. San Francisco Bay is a busy port that includes shipping, tugboats, ferry and fishing fleets, charter schooners, recreational power and sailboats, and even  autonomous globetrotting sailboats from Saildrone. Even classic tall ships like the Matthew Turner have sophisticated diesel-electric drive systems that only a well-trained and knowledgeable tradesperson can service.

Fortunately, there is an upcoming workshop for people looking to gain the skills to work in the marine trades.

If you’re someone who’s already in the trades, or perhaps have tired of keyboards and fluorescent lights and are looking to work on boats, the American Boat and Yacht Council will be offering a  three-day course offering graduates an ABYC Marine Systems Certification. ABYC states, “[Our] nationally accredited certification program provides standards-based, continuing education for marine technicians. There are hundreds of systems on modern-day boats. The ABYC Systems certification teaches you how to design, maintain, install and repair these systems with the confidence you need to succeed in today’s marine industry. This certification is the gold standard within the industry addressing air conditioning to zinc anodes.” 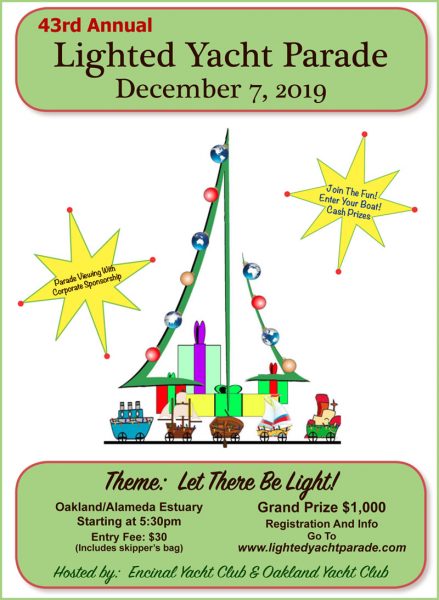 SHARE ON Tweet Share Email Linkedln
Receive emails when 'Lectronic Latitude is updated. SUBSCRIBE
'Lectronic Latitude: Wednesday, Nov 20
Shaking Out The Sails
Tall Ship ‘Matthew Turner’s Sails Fly On SF Bay
If you’ve been looking out across San Francisco Bay recently, you may have noticed a large tall ship gliding gracefully across the water.
2020 Pacific Cup
It’s No Surprise This Boat Will Race to Hawaii
It's no surprise that Bob Hinden has again entered Surprise in the Pacific Cup. "I will be navigator, and it will be my sixth Hawaii race," says Bob's daughter Rebecca.
Sponsored Post
ASA Courses at Modern Sailing
ASA 101/103 Combination Course: Basic Keelboat Sailing and Basic Coastal Cruising at Modern Sailing School & Club.
What’s Missing from Sailing? Kids
Reader Brett Langolf sent us this message — and link — a few weeks ago.
Uninvited Guests
Ever Found a Stowaway on Board?
In modern times it’s extremely rare for human travelers to stow away aboard sailboats. But over the years we’ve reported on all shorts of freeloading creatures found aboard cruising boats.
More 'Lectronics »
Report Listing