The “Safe Harbor” program is expected to start “very soon,” according to Sausalito city council members. The city, which is fronting $25,000 for the program, is preparing to launch the program imminently with two boats that will eventually receive subsidized liveaboard slips. “We will ramp up to the full eight-boat pilot program once we have identified adequate funds,” said councilmember Joan Cox.

Councilmember Jill Hoffman said that Sausalito is seeking out and vetting applicants who must apply for Safe Harbor if they want to participate. “This is something new that no one has tried — it’s a little bit outside the normal box, so we have to provide evidence and justification when applying for funds. A successful pilot program would be [one] that we are able to help people who are at risk and living on the water transition to a more stable, self-sufficient living situation and able to access support programs. We will learn a lot during the first few months of the pilot; the idea is that we will adjust as we progress.

“Part of the ethos of Sausalito is liveaboards,” Hoffman added. “If they’re not criminals and have decent boats, they are welcome to apply for the program.”

Hoffman added that many of the “support programs” offered in Safe Harbor is through a partnership with the Ritter Center, a San Rafael- based nonprofit that works to prevent homelessness.

“The reason that I believe Sausalito marinas are willing to work with us is that they’ve seen success in the city’s waterfront management plan, which has really focused on unoccupied boats and marine debris,” said councilmember Joan Cox. Following its departure from the Richardson’s Bay Regional Agency, or RBRA, Sausalito began collecting data on boats in its waters. Many boats were classified as marine debris (which, as we’ve reported, can be a contentious definition), while other boats were determined to be unoccupied. Technically speaking, every single boat on Richardson Bay is restricted to a 72-hour stay, but for decades, that ordinance was not enforced. Within the last year, however, Sausalito began serving notices. Some boats left for other waters or got slips, and some boats were confiscated and destroyed.

“All the data helped develop our policy moving forward,” said Hoffman. Sausalito currently has some 18 boats in its waters. “That’s down from a high of 77 in 2017,” Hoffman said. Between 8 and 16 boats are viewed as being occupied either part- or full-time. As the Wall Street Journal recently wrote — and as we have reported at length — Sausalito’s anchor-out community is seen as a symptom of the Bay Area’s housing crisis. It’s important to say that not all anchor-outs are considered homeless. Some people are seasoned mariners who prefer the lifestyle. But many people fall into a gray area.

“We voted unanimously not to take any action against the legacy anchor-outs,” said Cox. “We did extensive research with the assistance of a law firm who are experts in maritime law — there’s no doubt that we have the authority to enforce our regulations. But we are going to offer people an alternative, which is the Safe Harbor program. We are going to provide social services, help people find jobs, provide showers, and offer free food to assist participants in the program.

“I met one resident who thinks we’re going to raise taxes to fund Safe Harbor,” Cox continued, explaining that Sausalito plans to use its Tidelands Fund, which is money devoted to waterfront issues. “We are not raising anyone’s taxes or increasing tax burden on any other group.”

Hoffman said that Safe Harbor does represent a “substantial cost to the city, so you have to have good reason to use people’s money. But we think it’s worthwhile if you can help a person out of a desperate situation, and offer counseling [on issues] that led them to be in that situation.” Hoffman said that people must be in good standing with the law in order to be accepted into the Safe Harbor’s program.

When reporting on anchor-outs in the Oakland Estuary, we advocated for compassion when considering the homeless problem. We’d like to think that being good neighbors will ultimately create a better, safer community. But that requires that everyone — especially people who have drug problems and have been living on the fringes — act as good neighbors when they come into a marina.

We also cited a study of the Bay Area that found that providing housing for the homeless is actually cheaper than having people bounce through various social services.

“If this program is successful,” Cox said, “we’ll save money because we spend so much on resources to rescue people.” Both Cox and Hoffman mentioned a Marin firefighter who was injured trying to rescue a couple from a rowboat caught in a storm in January. “We already invest a number of city resources for managing the anchor-outs who live in our waters. We hope [Safe Harbors] will cut back on those resources.”

If Safe Harbors is ultimately deemed effective, Cox said that it may be expanded both in Sausalito and to anchor-outs in other jurisdictions within Richardson Bay.

“I just gave a talk in Southern California, and there’s a marina in Orange County considering something similar,” Cox said.

On Saturday, the Coast Guard rescued three people near the Carquinez Bridge in Vallejo after their 36-foot motorboat collided with the eastern jetty near the entrance of the Napa River. It’s not clear what caused the accident, other than something went terribly wrong.

The Coast Guard often draws “morals of the story” with these types of on-the-water accidents. We’re not sure what this one is, other than have a radar, use and check your radar, consult a chart, and consider doing the bulk — if not all — of your navigation in daylight hours. 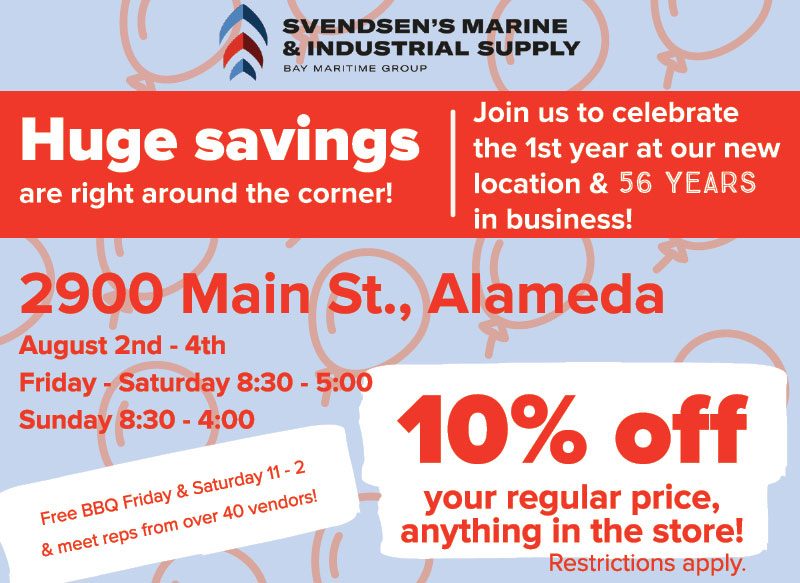 This month, a fleet of California El Toros sailed across the Pacific (aboard a container ship), headed for Kaneohe, on the east coast of Oahu, for their Nationals on August 1-4. Hopefully the 8-ft boats will make it back to the Mainland in time for the Pinecrest Worlds on August 24-25.

The Laser Masters battle for their Pacific Coast Championships on the Columbia River Gorge August 3-4. In the Monterey Bay area that weekend, MPYC will host the Konigshofer Regatta for Shields, while Stillwater YC in Pebble Beach will host the Santanarama for Santana 22s. In the San Diego area, Oceanside Yacht Club’s Charity Regatta will benefit Elizabeth Hospice.

Peninsula Youth Sailing Foundation will host the Chubb US Junior Championships for teenagers on August 7-11. The Sears Cup will be sailed triplehanded in Open 5.70s, the Bemis Trophy doublehanded in Club 420s, and the Smythe Trophy singlehanded in Laser Radials. See www.ussailing.org. Also on those days, Bahia Corinthian YC in Corona del Mar will host a Leukemia Cup Regatta. YRA racing on the 10th will consist of an OYRA ocean race and CBRA races. On August 10-11, SFYC offers the Summer Keel to the J/120, J/105, Express 37, Express 27 and J/70 fleets, and Santa Barbara YC will host the Viper 640 PCCs. On the 11th, the Day on the Monterey Bay Regatta will benefit Big Brothers Big Sisters of Santa Cruz County.

Looking to the Pacific Northwest, we see that Corinthian YC of Seattle welcomes the Moore 24 Nationals on August 9-11. On the 10th, San Juan Island YC will run the Shaw Island Classic, with a start and finish in Friday Harbor and a circumnavigation of Shaw Island in either direction.

Two St. Francis YC trophies are vied for on the weekend of August 16-18. The Aldo Alessio Regatta, on Friday, is open to all Offshore Racing Rule (ORR) boats of 30 feet or more. “Staff Commodore Alessio loved ocean racing, and endowed a perpetual trophy to encourage it,” says StFYC’s Susan Ruhne. “The race includes marks inside and outside San Francisco Bay, with a race-deck finish.”

On Saturday and Sunday, the Phyllis Kleinman Swiftsure Regatta will include a white-sails/PHRF/cruiser division with one Bay Tour race a day. Because it’s also open to ORR boats this year, it can serve as a tune-up for Rolex Big Boat Series. One-design classes invited are J/88 and the diminutive new RS21. Other one-design classes with a LOA of 30-ft are welcome to contact the StFYC Race Office by August 1 for possible inclusion. “Over a 36-year span, Sy and Phyllis Kleinman campaigned their boats Swiftsure and Swiftsure II,” explains Ruhne. “In memory of Phyllis, Sy endowed this regatta for one-design and handicap racing. There’s also a Best Dressed Crew Trophy.

SFYC will host the Melges 24 West Coast Championship on August 16-18 and the Opti PCCs on August 24-25. Vipers slither into Long Beach on August 17-24 for their Warm-Up and Worlds at Alamitos Bay YC. This will be the first Viper Worlds in the US.

Gracie takes the helm for Encinal YC’s doublehanded regatta (George crews). Women get their turn at the helm in Sausalito on August 24, when SYC hosts their Women Skippers Regatta.

Formula Kites and the Hydrofoil Pro Tour return to StFYC on August 21-25, with the Ronstan Bridge to Bridge scheduled for August 22, a fast treat for spectators. On August 24-25, the OYRA and SSS will again join forces for the Drake’s Bay Races. Register on Jibeset for either or both.

The month of August rolls right into Labor Day Weekend. We’ll preview some regattas for that mega-weekend in a later ‘Lectronic Latitude post. As usual, you’ll find many additional events in the Calendar section of Latitude 38, coming out this Thursday, August 1.

“A sailor is an artist whose medium is the wind,” said Webb Chiles.

In the spirit of expression and creativity, some local sailors are stacking art upon art and turning it into a unique sailing, singing and reciting experience. “We’re Bay Station Band’s ‘Love the Bay’ music and sailing video series,” wrote Deborah Crooks, who, along with California-based songwriter/musician Kwame Copeland, collaborates with their musical friends “to create a diverse form of Americana music. Drawing on their literary and roots tendencies, their songs are imbued with aspects of Americana, blues, jazz, pop, rock and roll.”

Here’s a sampling of Bay Station Band, and a link to their YouTube channel.

SHARE ON Tweet Share Email
Leave a comment
Receive emails when 'Lectronic Latitude is updated. SUBSCRIBE
'Lectronic Latitude: Friday, Jul 26
Wooden Boats in SoCal
One More Time Regatta
Santa Monica Bay is known for advocating RRS number 1 ("the wind shall quit immediately after the start of the race"). No such rule applied on the July 20th running of the wooden hull One More Time Regatta.
50th Transpac
Sighting the Transpac Finish
Photographers covering the Transpac Race to Honolulu often capture a scene that includes a finishing boat, a red buoy, and, in the distance and looking remarkably small, a lighthouse perched on a low ridge below the looming peak of Diamond Head.
Bareboat Charter
Catamaran Cruising with Modern Sailing
What's in a Nombre?
Punny Boat Names
Is there an unspoken tradition that some boat names have a certain amount of “punny-ness” to them?
More 'Lectronics »