The Peninsula Youth Sailing Foundation, or PYSF, has steadily been building its ranks over the years. Located on Redwood Creek, PYSF provides instruction, coaching, practice, and racing opportunities for kids from six years old through high school. Under the leadership of former Olympian Molly O’Bryan Vandemoer, PYSF has gone from 40 kids to about 200. Many of those kids have gone on to be highly competitive sailors, and PYSF has become well represented at national regattas.

But the program is maxed out at its modest, but totally charming, facility. Last Friday, PYSF officials announced a partnership with the Club at Westpoint, a new sporting and social club at Westpoint Harbor. “We will gradually be moving our locations over the next six months,” Vandemoer said.

The Club at Westpoint is currently housed in the Harbor House at Westpoint Harbor; organizers hope to break ground on a new clubhouse soon. “Youth sailing is such a big part of any club,” said Peter Blackmore, the president of the Club at Westpoint (we recently featured the Blackmore family in the June issue’s Sightings). The new club will have some 60 acres available — 30 on shore and 30 on the water — and will have endless potential for a youth sailing program that is already bursting at the seams and enjoying unparalleled success.

We will have much more on this exciting development in the near future.

Hum the Hawaii Five-0 Theme Song Before You Read This

The channel heading into the Ala Wai Boat Harbor on Oahu is known to get a little . . . gnarly. The channel actually doubles as a surf spot. Case in point: yesterday.

“A recent run of swell has been lighting up the Pacific,” said The Inertia’s Instagram account. “The channel at Ala Moana completely closed out yesterday and this sailboat [above], packed with people, was forced to surf a few sets back into the harbor.” You can see video on our Facebook page.

As we were driving east on the San Mateo Bridge on Monday, we saw two . . . sticks . . . . poking out of the water. On closer inspection, it was clear that a yawl or ketch was sunk in shallow water near the entrance to Redwood Creek. The boat “appears to be a 40-ish-ft ketch,” said a South Bay friend of Latitude. “I was on the Bay on May 4 when it was first reported adrift. I sent a note off to the Coast Guard on June 12 after seeing it aground and awash. They responded around the 19th, and said they were aware of it and had investigated it for any Bay contamination. They are not authorized to do more than look for contamination or leaking fuel and otherwise just mark its location.”

The boat does not appear to be in navigable waters.

If you have any pictures or information on this vessel, please let us know.

“Long Beach Yacht Club is committed to making the start line at the first America’s Cup World Series Event in Cagliari, Italy,” said Camille Daniels, commodore of LBYC. “Our membership is excited, and we are all working hard to achieve our goal of bringing the America’s Cup to Long Beach

“We appreciate the continued support of LBYC and its membership, and the assistance of Emirates Team New Zealand and the Royal New Zealand Yacht Squadron, over the past few months as we have reorganized our team,” said Mike Buckley, co-founder and skipper of Stars+Stripes USA. “We continue to make progress with corporate partners, and believe we will have what it takes to be competitive in Auckland.”

Stars + Stripes will have to complete the entry-fee payment process before they will be eligible to race. They’ve already made their initial payment. But, as a late-entry challenger, they also have to pay a $1 million late fee, due in installments by October 1. See the team page at https://starsandstripesteamusa.americascup.com.

DutchSail, however, is out. The team from the Netherlands is the second challenger to step down. In May, the Royal Malta Yacht Club officially withdrew the Malta Altus Challenge. 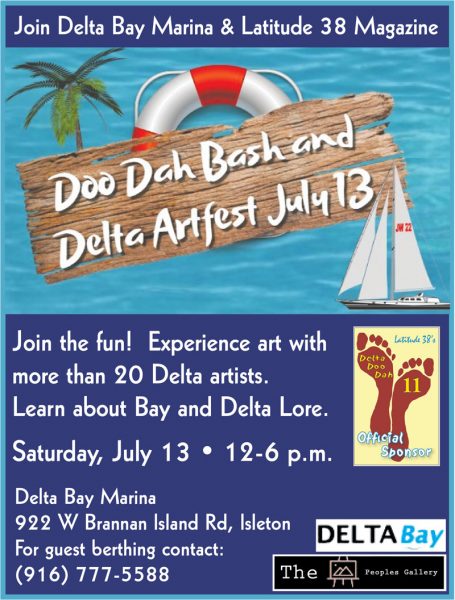 Register for the Delta Doo Dah before July 11. It’s free, quick and easy!

Yesterday evening on Tomales Bay, the Coast Guard rescued two teenagers from a swamped dinghy, which appeared to be an FJ.

“Members of a local yacht club contacted watchstanders at Coast Guard Sector San Francisco around 6 p.m. reporting seven of their sailboats were in distress,” a Coast Guard press release said. “The members reported three sailboats were capsized and the rest were inundated by the weather.”

Two 47-foot Coast Guard lifeboats, or MLBs, were dispatched from Bodega Bay; the Inverness Fire Department and Sonoma County Sheriff’s Office were also on-scene. “Due to the strong winds creating unstable conditions for the sailboat, the [Coast Guard] rescue crew deployed a surface swimmer, who brought the two teenage sailors from the sailboat aboard the 47-foot MLB.”

The Coast Guard said that 12 other sailors, and their sailboats, made it to shore with help from a yacht club chase boat.

“‘The key factor in this rescue was that the sailors were equipped with the proper rescue equipment and gear,’ said Petty Officer 2nd Class Bryan Thurman, a boatswain’s mate at Station Bodega Bay and crewmember aboard the 47-foot MLB. ‘The water temperatures were in the low 50s, and having wetsuits prevented hypothermia. While the crewmembers at Station Bodega Bay train constantly for heavy weather rescues, the weather in Tomales Bay can turn quickly, and wearing the right equipment can drastically help a person’s chances of survival.'”

The US Coast Guard reminds mariners to stay clear of fireworks-display barges and shoreside facilities during the upcoming holiday. Temporary safety zones have been established surrounding fireworks displays. “No vessels may enter into, transit through or anchor within these safety zones unless authorized by the Coast Guard or assisting local law enforcement agencies during the fireworks displays,” alerts the USCG.

Some safety zones around the San Francisco Bay Area:

The Coast Guard urges mariners not to launch or use fireworks aboard a vessel as they can be mistaken for a sign of distress, needlessly attracting Coast Guard and other rescue resources. Your expired flares are not makeshift fireworks! “It is a federal felony for anyone to knowingly and willfully communicate a false distress message. This includes, but is not limited to, firing flares in a non-distress situation. The firing of a flare in a non-emergency situation is a felony and could result in a delayed response to a legitimate maritime emergency.”

Among their usual safety recommendations, the CG reminds boaters to keep navigable channels clear if watching fireworks from the water and to listen for safety zones, safety bulletins and emergency broadcasts via VHF channel 16.

“We want everyone to enjoy the waters of San Francisco Bay this 4th of July, while maintaining vigilance and staying safe,” said Capt. Marie Byrd, commander of Coast Guard Sector San Francisco. “Before getting underway, be sure to file a float plan with friends or family and maintain awareness of weather conditions. Out on the water keep a sharp lookout for other watercraft, steer clear of fireworks safety zones, and contact the Coast Guard at the first sign of trouble on your boat or any other boat.”

For more boating safety tips, see www.uscgboating.org, and remember to check the NOAA website at www.noaa.gov for the most up-to-date information on weather forecasts.

Here’s to hoping you can get out on the water this holiday and have a happy Fourth of July! The Latitude 38 office will be closed tomorrow and Friday, but we do plan to post an edition of ‘Lectronic Latitude on Friday.

SHARE ON Tweet Share Email Linkedln
Leave a comment
Receive emails when 'Lectronic Latitude is updated. SUBSCRIBE
'Lectronic Latitude: Monday, Jul 1
Ocean Cleanup
Fishing Nets from the Pacific Gyre
The North Pacific Subtropical Convergence Zone, often referred to as the Pacific Gyre, consists of a sea of floating plastic material — various bottles, plastic chairs, packaging straps, buckets, rope and fishing nets. Several efforts have been undertaken recently to try and rid the Pacific Ocean of this debris.
I need a new Latitude
July Issue Out Today
The July issue is quite possibly our favorite Latitude 38 ever — especially Letters, which also has a sober discussion about readers' run-ins with white squalls, a continuing debate about the Oakland Estuary, and lots of musings about people's first boats, best boats, and last boats.
Hurricane Hideaway
Red Frog Beach Island Resort & Marina
Red Frog Beach Island Resort & Marina, the ultimate hurricane hideaway and Caribbean cruisers' playground.
Tokyo 2020 Games
Tickets for the 2020 Olympics
With just over a year left until the Opening Ceremony in Tokyo, tickets will go on sale July 9 for the 2020 Olympics.
There's No Port Like Newport
When West Meets East, Part 3
The breeze in Newport, Rhode Island, was 10 to 15 knots, when it wasn’t 18 to 22.
More 'Lectronics »
Report Listing