The weekend forecast for the Corinthian Yacht Club’s Midwinters was a bit foreboding. Squalls, rain, even hail, all with cold breezes combined with a massive, runoff-enhanced ebb current. So it was with some irony that we found ourselves on Sunday hiding from the ebb behind Angel Island while the race committee put the starting sequence on wind hold and we relaxed in calm, sunny conditions.

As we puttered along, the call suddenly went out to “Pull the sheet.” In fact, along with the many large logs and other debris being washed into the Bay, was a large sheet of plastic that needed rescuing. We pulled out our trusty boat hook (which doubles as a downwind whisker pole), did a quick U-turn so that crewmember Michael Rossi could pull the sheet into the hands of John Vreeland, thus saving Boyan Slat and The Ocean Cleanup Project from having to drag one more piece of plastic from the Pacific gyre.

The entire weekend turned out better than forecast, with very little rain. Besides a major squall passing through right during Saturday’s starting sequence, the skies cleared and the breeze was brisk and manageable, which everyone greatly appreciated as they needed all of it to fight the ebb around the course.

This was the last weekend of Corinthian’s two-weekend Midwinter Series, one that put everyone’s full complement of sailing abilities to the test. Crisp color transitions highlighted tide and wind lines, but you still had to figure out which side to be on. Then you had to find just the right combination of wind and current while searching for tactical advantage against your fleet.

It was a classic brain teaser of the sort that makes racing the Bay so endlessly interesting. Unlike most sailing, the upwind legs seemed to flash by in nanoseconds, whereas downwind legs against the ebb were on ‘extended play’. On our Ranger 33 Summer Sailstice, our top speed over ground was 10.1 knots upwind while we clawed our way around Harding Rock downwind at about two knots. (Have you ever thought about what kind of chain and ground tackle is holding the Harding Rock buoy in place on a day like yesterday?)

We’ll have more in Racing Sheet in the March issue of Latitude 38. In the meantime you can see who beat the ebb and their competitors by checking out the race results here.

Over the last few years, we’ve been reporting on the issue of privatizing weather forecasting. The idea dates back 14 years ago to a proposal that would have effectively given taxpayer-funded data to the commercial weather industry, where it would then be sold back to taxpayers. The National Weather Service Duties Act of 2005, proposed by then Pennsylvania Senator Rick Santorum, who is now a senior political commentator with CNN, died in committee. Santorum was “accused of political impropriety and influence peddling because Joel Myers, the [founder and chairman] of Pennsylvania-based AccuWeather and one of Santorum’s constituents, was also a Santorum campaign contributor,” according to revolvy.com.

More than a year ago, President Trump nominated Barry Myers — Joel’s brother, who stepped down in early January as the CEO of AccuWeather — to head the National Oceanic and Atmospheric Administration (NOAA). “The appointment of Myers, a businessman and lawyer, breaks from the recent precedent of scientists leading the agency tasked with a large, complex and technically demanding portfolio,” according to a 2017 article by the Washington Post. “Every past NOAA administrator but one, attorney Richard Frank who served from 1977-1981, held science degrees.”

President Trump nominated Myers in October 2017, “but that nomination expired after the Senate failed to confirm him. He needs to be renominated,” according to Bloomberg. “NOAA oversees the National Weather Service and the nation’s fisheries, and Myers has led efforts to trim some of the agency’s weather offerings to give commercial forecasters more room to grow their businesses. Critics have said Myers may soon be in a stronger position to pursue those goals.”

But the Post also quoted Vice Admiral Conrad Lautenbacher, the NOAA administrator under George W. Bush, who said that “Myers is an ‘ideal fit’ for the position. Barry brings with him an outstanding record as a leader and manager as well as many years of experience in all aspects of meteorology.”

The roles of the federal government and private businesses have always been fiercely debated in Washington. In 2005, when one of the Myers brothers went to meet with Santorum (the Senator said he does not recall if it was Joel or Barry, according to another article by Bloomberg Businessweek), there was an existential debate about the National Weather Service, which falls under the umbrella of NOAA. “The NWS was giving away forecasts on its website, radio stations, and elsewhere, when businesses such as AccuWeather charged its clients for theirs — never mind that AccuWeather relied on the service’s free data to formulate its own predictions. Santorum agreed that commercial weather companies deserved protection.”

While we think the belief that private businesses need some protection is a valid political view, we vehemently disagree in monetizing government data that has long been free. We assume that most serious sailors are amateur weather forecasters, and that really serious sailors, and especially cruisers, probably pay for some kind of weather service. We don’t believe that private businesses, which came into being under the current model of free government weather data, require any extraordinary or far-reaching protections.

We also think that the idea of “shaking up the government,” and, oh boy, “draining the swamp,” are also valid political viewpoints. But is draining the swamp, in fact, a pure misnomer? In 2005, the Wilmington Star News reported that the Myers brothers “donated over $11,000 to Santorum’s political campaigns, including $2,000 two days before Santorum introduced the [National Weather Service Duties] bill.”

What kinds of conflicts of interest — or just the unabashed lining of pockets — are we willing to tolerate? When does it simply become quid pro quo? 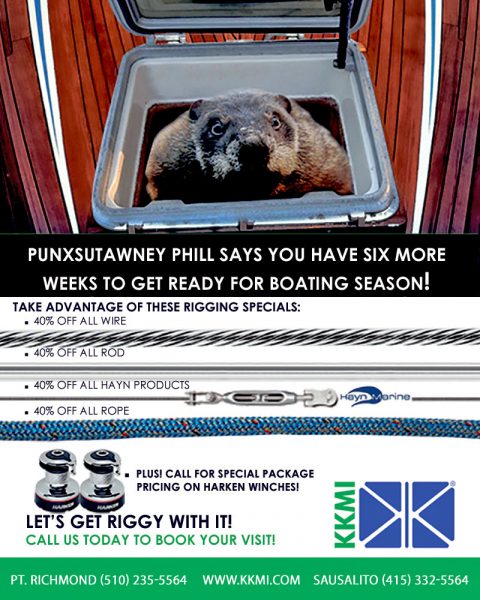 This Wednesday evening, the St. Francis Yacht Club will offer a free seminar, Understanding ORR & ORR-EZ Rating Rules. The club’s “mission is to be ‘a leader in yachting’ and as such we have used a variety of rating rules for our regattas,” states the invitation. “We currently use Offshore Racing Rule (ORR) and are hosting an educational session with Jim Teeters, technical director of the Offshore Racing Rule.”

Boat owners and sailors interested in learning more about ORR and ORR-EZ, and how to use them, are invited to attend on February 20 from 7 to 9 p.m. This is a free event open to all, but non-members must RSVP by phone to (415) 563-6363. (Club members log in to www.stfyc.com to register.)

StFYC has also posted the Notice of Race and opened registration for the Rolex Big Boat  Series. To benefit from a discount on the entry fee, sign up before June 1. The regatta dates are September 11-15.

The regatta is open to all one-design boats in the Pac52, J/125, J/105, J/88 and Express 37 classes. Any class with six entries by August 1 will receive their own one-design start. Classes that fail to reach this critical mass will be welcome to race in ORR, alongside monohulls greater than 35-ft LOA with a current fully or partially measured ORR certificate.

The not-big J/70s are invited with a minimum of 15 boats registered by August 1.  “We’re excited to bring back the J/70s as a one-design class,” says regatta chair Susan Ruhne. “In 2016 they were the largest one-design fleet to compete, qualifying for the Commodore’s Cup Perpetual Trophy. Since then, the West Coast J/70 fleet has been building in anticipation of their 2020 Worlds in Southern California.” The top Corinthian and top professionally crewed J/70 teams at the 2019 Rolex Big Boat Series will both win berths in the 2020 Worlds. 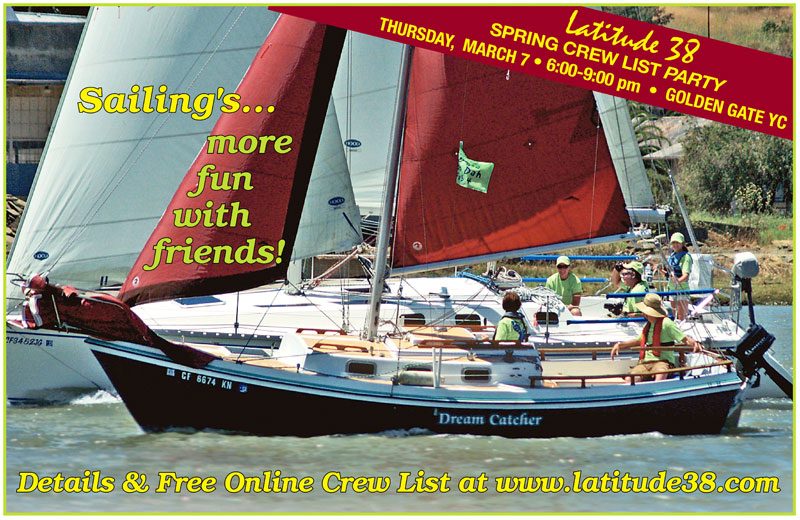 SHARE ON Tweet Share Email Linkedln
Receive emails when 'Lectronic Latitude is updated. SUBSCRIBE
'Lectronic Latitude: Friday, Feb 15
Race to Hawaii
100th Entry in Transpac
The 50th Transpac Race to Honolulu will start from Los Angeles this July, but the 100th entry came from the San Francisco Bay Area. Chris Welsh's classic Spencer 65 Ragtime…
Cruiser's Rally
New Baja Ha-Ha Dates for This Year
If you are one of the many sailors making plans to participate in this fall’s Baja Ha-Ha XXVI — more than 10,000 sailors on over 3,000 boats have preceded you in the last 25 years — please note that the event will start a week later than in recent years.
Sponsored Post
Ad: North U Seminar at Berkeley YC
Spectator-Friendly Sailing
SailGP and Caribbean 600
SailGP racing on six foiling F50 catamarans is off and running. The event ran three races yesterday afternoon (February 15 in Australia). Three more races are on the schedule for today.
Always the 15th
Classy Classified Ad Deadline Today
The ad deadline for the March Classy Classifieds is today, February 15, at 5 p.m.
More 'Lectronics »
Report Listing