On Wednesday, solo circumnavigating guru Jeanne Socrates made a late-night rounding of Cape Horn. It was her third (we think) rounding of the Cape in her attempt to become the oldest person to sail around the world, unassisted and alone.

“Lovely to speak to my friends at RVYC having a celebration of my Cape rounding!” wrote Socrates on her blog. I had a Dark ‘n Stormy, Nereida version, ready to share a drink with the party. It felt good to be celebrating!

Socrates has done a few circumnavigations before, and is currently the oldest woman to complete a singlehanded circumnavigation. In one of her attempts, Socrates was knocked down off Cape Horn, broke her boom, and was forced to retire — so we’re not sure if she counts that as an official “rounding.”

We’ll have a full recap of Socrates’ voyage to this point — and the ‘rush hour’ at Cape Horn these last few weeks — in the January issue’s Sightings.

Long before the North American Fun Tourism Agreement sailors have known Mexico to offer a warm welcome. Over the years it’s only gotten better. The number of marinas and quality of services have enhanced the generosity, culture and spirit of the Mexican people. In January’s Changes in Latitudes you’ll read about Ken and Sherri Bliss of the Beneteau 361 Cake, who’ve been in Mexico five years. “Frankly we can’t find a reason to leave,” they wrote. “The Mexicans are indisputably the nicest people on Earth; their food is incredible; for nine months of the year their weather is perfect; the prices are cheap, cheap; and the places we sail into — whether it’s the raw beauty of the desert in the Sea or the lush jungle in the south — take our breath away.”

So what could make it better? The marinas open their arms with welcoming parties to build friendships amongst the cruising community. We received some photos from three recent welcoming celebrations along the Mexican coast.

On November 3, Marina Puerto Escondido in Loreto, the oldest city in Baja, held a grand opening party for about 250 guests in a warm, outdoor celebration. New docks, new breakwater, new services and a new charter operation run by West Coast Multihulls are all part of this reinvigorated development in this well-protected natural harbor.  The new owners have rolled out the red carpet to cruisers who want to discover the Sea of Cortez and this harbor tucked under the 3,000-ft Cerro Tabor Palmilla peaks.

For many years, right after the finish of the Baja Ha-Ha, the City of La Paz and the La Paz marinas have thrown a welcome party for cruisers departing Cabo San Lucas and venturing up into the Sea of Cortez. It’s been such a warm welcome that some cruisers find it a bit of a ‘black hole’ — it’s hard to regain escape velocity. This year the Baja Ha-Ha Beach Party was held on Sunday, November 18, at La Costa Restaurant.

“The La Paz Beach party was a great venue,” reports Chuck Skewes of the Beneteau 60 Ullman Sails. “It was held in a small beachfront restaurant that had dinghy landing in smooth water protected by the breakwater of Marina La Paz. The food was fantastic, well organized, and on time. The band was a great way to keep the night rolling, with plenty of sailors dancing. What a great way to wind down the Baja Ha-Ha for 2018.”

Farther south and following the cruiser welcome party in La Paz, harbormaster Saul Lopez of Marina Mazatlan organized a cruiser welcome party. The party on Thursday, December 13, at Marina Mazatlan Beach Club collected more than 70 cruisers and friends to inaugurate the start of the 2018/19 cruising season. Many cruisers are arriving for the first time; others are returning for the sailing season ahead after leaving their boats for the summer.

It’s almost Christmas and many cruisers are still on their way south to join those who have already arrived. ‘Tis the season to enjoy cruising in Mexico. 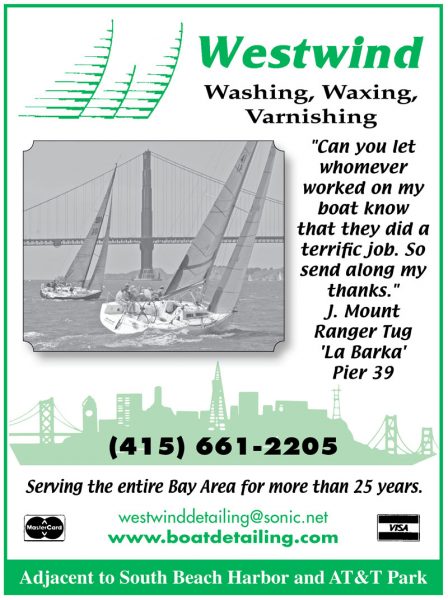 Regular readers of ‘Lectronic Latitude may recall that we reported on the capsize of Greg Slyngstad’s catamaran Fujin back in February. The Seattle sailor’s Bieker 53 was racing in the wild RORC Caribbean 600 when she flipped during the first night of the race in 30- to 40-knot wind. The crew escaped injury, and Sabans towed Fujin, upside down, to nearby Saba Island.

We’re pleased to report that the swift cat is now back in the water and entered in the new Caribbean Multihull Challenge, a brand-new regatta. Sint Maarten Yacht Club will host the event on February 8-10. Slyngstad entered early. Herb McCormick, a former editor at Latitude 38, posted an update about Fujin on St. Maarten YC’s website. “Following a complete refit in Antigua that included a new rig, new electronics and new engines, Fujin will return to the racecourse for the first time in St. Maarten during the Caribbean Multihull Challenge,” wrote Herb. You can read his full report here.

The Caribbean Multihull Challenge welcomes racing catamarans and trimarans as well as chartered cats and cruising multihulls. Sixteen boats were signed up as of this morning. For info, see www.smyc.com/caribbean-multihull-challenge.

Today is one of those glass-half-full-or-half-empty moments. It’s the first day of winter and the shortest day of the year. Do you lament the darkness? Or do you appreciate that, starting on Sunday, the days get longer right up until June 21? Today is the Northern Hemisphere’s winter solstice. Our shadows are long as the sun touches the Tropic of Capricorn in the Southern Hemisphere and begins its long climb north. In the south, Randall Reeves, Jeanne Socrates and all kinds of other-hemisphere sailors are enjoying sailing in the longest daylight of the year, with a full summer ahead. More on the solstice later.

What might you look forward to on the weekend of June 21 when the sun finally reaches the Tropic of Cancer and the Northern Hemisphere solstice? Sailing, for one. Harbormasters regularly tell us that just 10% of the boats in any marina are used with any regularity. And we’ve seen it on Summer Sailstice at Encinal Yacht Club. On brilliant, sunny days with warm air and 12 knots of breeze on the Oakland Estuary, we see 95% of boats idle in their slips. We consider that a crime scene. It’s actually one of the reasons we started Summer Sailstice — to get the whole world sailing. Clearly we still have a ways to go.

If you look at the two maps below you’ll see people already signed up for Summer Sailstice 2019 up top and people signed up for the 2018 Summer Sailstice below. As we approach New Year’s resolution time we suggest you make a public commitment now, six months in advance, to go sailing on the weekend of June 21-23, 2019. You have six months to decide if you’ll race, cruise or daysail.

We have some suggestions for Bay Area sailors. Racing options include any of the Friday night races, the YRA’s Westpoint Regatta to the South Bay, the StFYC Woodies Invitational, Benicia YC’s Summer Sail, Encinal YC’s Small Boat Regatta and several others scattered across the Bay. You could join your yacht club’s ‘cruise out’ or, heaven forbid, just head out on the Bay with no particular mission in mind. You could join the Trans Tahoe Race, already signed up on the Summer Sailstice site or, like Del, create your own event such as his to repeat his 2018 Summer Sailstice cruise aboard his Catalina 320 to Half Moon Bay.

A post on the Old Farmer’s Almanac website shows both the astronomical and meteorological seasons for 2019. According to the Old Farmer’s Almanac, the astronomical start date is based on the position of the sun in relation to the Earth. The meteorological start date is based on the 12-month calendar and the annual temperature cycle.

A winter solstice actually occurs twice a year, once in December in the Northern Hemisphere and once in June in the Southern Hemisphere. While the winter solstice occurs at the same moment all over the world, the date and local time differ depending on the year and a location’s time zone. For locations that are to the east of UTC (Coordinated Universal Time aka GMT aka Zulu) it may fall on the day after. For locations that are to the west of UTC it may fall on the day before.

Don’t miss sailing on the sunny days of summer, and, if you’re in California, don’t miss any sunny days of sailing. Wherever you are and however you plan to sail, now is a good time to register for Summer Sailstice, enter to win a prize, and put your sailing plans on the map for 2019. If the winds change, change your plans.

Latitude 38’s world headquarters will be closed for the holidays all next week through New Year’s Day. We’ll pop into the office on Friday, December 28, long enough to facilitate the distribution (and posting online) of the January issue of the magazine and the 2019 Northern California Sailing Calendar and YRA Schedule. We plan to post ‘Lectronic Latitude editions on Wednesday, December 26, and Friday, December 28.

Happy Holidays and Happy New Year from our crew to yours!

SHARE ON Tweet Share Email Linkedln
Leave a comment
Receive emails when 'Lectronic Latitude is updated. SUBSCRIBE
'Lectronic Latitude: Wednesday, Dec 19
Update
Wreckage of Missing Cat Found
The wreckage of a catamaran owned by a missing sailor was found in the Sea of Cortez this week, while a body — which has yet to be identified — was discovered several miles from the wreck.
'Dar Młodzieży'
Polish Tall Ship Graces the Bay
“I was thumbing through AIS, and found the Dar Młodzieży is coming to town,” reader John Dukat wrote.
Help Wanted
Latitude 38 Job Opportunity
Latitude 38 Media is seeking a full-time Marketing/Administrative/Production Assistant.
West Coast Winter
The Week in Swell
After a massive purple blob enveloped the West Coast this weekend, things are finally calming down.
Offshore Yacht Racing
Rolex Sydney Hobart Preview
Close to 90 yachts will take on the 74th edition of the Rolex Sydney Hobart. Beginning on December 26, the 628-mile 'Boxing Day classic' to Hobart, Tasmania, has become one of the most famous sailing races on Earth.
More 'Lectronics »
Report Listing