An 8 a.m. gray start, ending in a black nighttime finish for all but one of the 37 boats in five classes that spent the past Saturday puzzling how to sail doublehanded around the Farallon Islands before midnight, couldn’t obscure the satisfaction that comes from the challenge. For the past 40+ years, the Bay Area Multihull Association has run the Doublehanded Farallones race to give both multihull and monohull sailors a chance to test their boats, skills and strategies to be first around the Farallones with a crew of just two.

The skippers’ meeting on Thursday optimistically showed light winds slowly building to moderate by late afternoon, giving everyone (including the race committee) the hope that they’d be home in time for dinner. Regardless, the midnight cutoff was clearly explained just in case the forecasts and reality clashed. The ensuing clash with reality played itself out on the ocean, as the breeze never really built unless you were good enough to sail through the doldrums and catch the evening breeze by the Golden Gate on the return into the Bay.

Annoyingly, one boat, the Seacart 30 GP+ Bottle Rocket, sailed by David Schumann and Trevor Baylis, did actually finish before dinner — they came in just before 6 p.m. The rest of the fleet nursed their boats through the light air as daylight faded. At about that same time, we were aboard our friend Randy Gridley’s Sabre 38 Aegea hoisting the asymmetrical cruising chute as we rounded the Farallones, doing mental calculations about whether it might be possible to finish by the midnight cutoff. Our 2.2 knots of boat speed, with 25 miles to go, convinced us to fire up the diesel to join only five other boats to DNF, with admiration for all those who succeeded under sail alone.

It was a long but pleasant day on the ocean, with flat water, relatively warm air, and the occasional whale spouting to distract you from your search for williwaws, cat’s paws and zephyrs crossing the Gulf of the Farallones. Despite the light winds there was always enough to keep you moving and believing you were going to be home before midnight.

After that annoying performance by the blazingly fast trimaran, the next boat to finish was a monohull. Dave Hodges and Tim Cordrey, sailing David’s Farr 38 Timber Wolf, added another win in the Monohull 1 class to his stellar record. From there, finishers rolled in right up until 11:35 p.m., when the Beneteau 10R CruzSea Baby, sailed by Brian and Amanda Turner, finished up the night. Six minutes separated the J/120s Hokulani and Twist, with Nathalie Criou and Blake Loncharich aboard the Beneteau Figaro Envolée in between, at just a few minutes before 10 p.m. Everyone radioing in at the finish thanked the race committee for their late-night dedication and a great day on the water.

We’ll bring you more on BAMA’s Doublehanded Farallones Race in the November issue of Latitude 38. In the meantime, you can see the full results from the efforts of all these colorful sailors on an otherwise colorless day right here.

With only five weeks to go before the Baja Ha-Ha XXVII Kick-Off party in San Diego, we’re keeping an eye on what’s happening ahead of the rally. The Baja Ha-Ha’s Grand Poobah is sharing updates on the Ha-Ha website, which we can only imagine is fueling the excitement, and it appears there are a few Ha-Ha sailors who are finding it hard to wait for the official start.

The Poobah writes, “Kathy Erwin of the San Luis Obispo-based Brewer 44 Sea Bella reports that there are already seven Ha-Ha boats in Ensenada with more expected soon. ‘The crews of four boats — Sea Bella, Serina, Reverence, and Arkouda — got together for a trip to Playa Agua Caliente, 50 miles south of Ensenada,’ reports Kathy. ‘It has natural hot springs that boil up in the sand at low tide. Dig a hole at low tide and it fills with super-hot water. So hot that you can’t dig too deep or your feet will get scalded — and quickly, too.'”

“‘Our group of four Ha-Ha boats are very quickly becoming a tight group of sailors,’ says Kathy, ‘and looking for more while we wait for the November 1 Ha-Ha start.'”

We’ve also learned that face painting will be available at the party, as 31 kids 16 and under have been signed up for this year’s rally.

“That’s a record,” the Poobah writes. “While sometimes shy in the beginning, kids love clowns and face paint. Which is why the Ha-Ha has contracted for the services of the clown who did the face paint of the three women in the photo below.”

But for all of you adult sailors who are anticipating a party face to complement your party costumes, the Poobah warns that the face painting will only be available for 90 minutes, and it will be “kids first!”

The Grand Poobah also reminds everyone, “An Ensenada Ha-Ha start is perfectly viable, as it makes the first leg 55 miles shorter, and it’s much more likely you can get a berth in Ensenada than in San Diego.”

And to make sure you can still attend the Skippers’ Meeting and Last Cheeseburger in Paradise Kick-Off Costume Party the day before the start, the Poobah has outlined how to get there, overland, from Ensenada. “Take the ABC bus and red trolley up the day before and spend the night in a Shelter Island-area hotel. There are some economical ones. After the Kick-Off Party, hop back on the Red Trolley to Tijuana, then the ABC bus to Ensenada. The Poobah has done this trip many times.”

Last week Jim Considine reported his ’06 Pursuit 2570 stolen from Gashouse Cove in San Francisco. Yesterday we received the good news that the boat had been discovered in a slip at Pier 39 Marina.

“I got it back on Friday, overwhelmingly intact.” Jim told us.

Though it was unclear how long the boat had been in the marina, it was still in (mostly) good shape, though some of the onboard equipment may need repairing or replacing.

“It looks like thieves took the boat fishing, as rods and nets were strewn about. They left some marks on the hull, ransacked the cabin, stole binoculars (and maybe more), and ran down fuel and batteries. They may have shorted the chartplotter/ radar/depthsounder in their efforts, but I am still trying to diagnose that new condition.”

As boaters are wont to do, dozens of people helped keep an eye out for Jim’s stolen vessel, and he expressed his appreciation to a few in particular. “Many thanks to Scott Grindy, harbormaster at SF Park & Rec. [San Francisco Recreation and Parks] for notifying other CA marinas to be on the lookout; to Steven Arsenault and his colleagues on the Pier 39 staff; to Officer Kanada and his colleagues at the SFPD marine unit; and to the many folks from the Coastal Cruising Club and SF boating community who offered advice and were on high alert for sightings of our boat.”

Now that Jim’s power boat has been recovered he can get on with his most important task, learning to sail.

Mini Mania began today in Europe. The Mini Transat EuroChef started off Les Sables-d’Olonne in France. Organizers delayed the start two days until this afternoon at 3:30 p.m. local time to allow a windy cold front to pass through.

The fleet is now seeing 15-20 knots of breeze from the northwest. They’re bound for Santa Cruz de La Palma, 1,350 miles away in the Canary Islands for the first leg. After a stopover, the second leg will start from Santa Cruz and head across the Atlantic to the final finish in Saint-François, Guadeloupe, in the Caribbean, a mere 2,700 miles away. All this singlehanded in a 21-ft boat. Ninety racers signed up and made it through the competitive selection process. With more Mini sailors than spots in the race, the fleet has been doing many offshore and training races in the past two years.

Most of the sailors are French (bien sûr), and there are two divisions of boats. One is the Proto, or almost-anything-goes box rule, with boats sporting foils and canting keels, carbon fiber and other new stuff. The other class is the Series, in which only production boats are allowed. They have fixed keels, and no foiling or carbon. Sixty-six Series and 24 Protos are racing.

Twelve women are going, and a smattering of Italians, Spaniards, Germans and other Euros. And one American: Jay Thompson, 36, is from California. He built his own foiling Proto Mini 6.50, designed by the French firm Guillaume Verdier. It looks fast. Maybe they have what it takes to do well in a highly competitive race. The last time an American won the race was a long time ago, in 1977, when Bay Area sailor Norton Smith competed in a Tom Wylie Proto design. 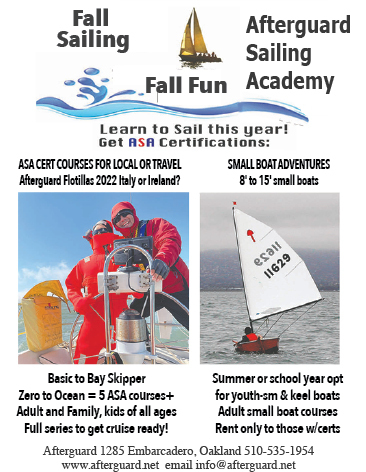 Covering everything from ASA Certifications and international flotillas, to small boat adventures.

SHARE ON Tweet Share Email Linkedln
Receive emails when 'Lectronic Latitude is updated. SUBSCRIBE
'Lectronic Latitude: Friday, Sep 24
Will it be 'October all Over' This Year?
Hurricane Sam Makes Slow Progress in Atlantic
While Sam doesn't appear to be in any great hurry at the moment, its projected path could see the weather system crossing the Leeward Islands next week.
Without a beach you can keep on surfing
Wing Sailors Catch Ship to Ride the Endless Summer
Wing sailing is only expanding the menu of options for people who are 'sailing' the Bay.
Sponsored Post
San Francisco on the Bay: “Trail Guide”
Discover San Francisco Bay and all that inspires those of us who live or visit here.
Chartering on the East Coast
A Trip We Will Certainly Never Forget
My expectations were exceeded when I booked 'Winona,' a 2019 Jeanneau 419, for seven nights at an excellent price. Quahogs, oysters and lobstah rolls, here we come!
Happy Snaps
A Sailing Photo Collage to Get You Ready for the Weekend
We have stacks more photos, but not enough time or space to share them all here.
More 'Lectronics »
Report Listing