On Thursday night aboard the historic USS Midway in San Diego at Navy Pier, US Sailing honored the best American sailor athletes of 2019. The national organization named International 5O5 World Champions Mike Martin and Adam Lowry, both from Mill Valley, as Rolex Yachtsmen of the Year. IKA Formula Kite Class World Champion Daniela Moroz of Lafayette won Rolex Yachtswoman of the Year for the second time in her young life.

Moroz’s second Rolex Yachtswoman of the Year award is all the more remarkable given that she just had her 19th birthday. She continues to power through the women’s world kiteboarding fleets with a string of firsts in 2019. She described the variety of venues such as Lake Garda, where she tackled the shifting lake winds while flying a kite, standing up on a foiling board, and weaving her way to the front of a fleet of elite of women.

Foiling kiteboarding is on the list of new classes for the 2024 Summer Olympics to be held in France. The kiteboarding event will feature a new and unique format with a mixed male/female relay. This will mean each male/female team will sail a course solo, then sail into a box, at which point their teammate will sail out of the box to do the next lap. Moroz is already focused on bringing home the gold in 2024.

For Mike Martin this honor was especially sweet after his previously being on the ballot for the Rolex award six times but always ending up the bridesmaid. In his acceptance speech, Martin recognized his outstanding crew, Adam Lowry, who is out on the wire and calling tactics. As Martin said, “I just steer while Adam is telling me where and when to tack from the wire. I just keep doing it until there are no more boats looking through the jib window.”

After the award ceremony we overheard Martin and Lowry talking about the challenges of jibing. We were a little confused, wondering how it could be a problem for this world champion team. Turns out they were discussing jibing foiling kiteboards which, for them, is much trickier than the wire-to-wire spinnaker jibe aboard a 5O5.

The winners also noted the other competitors with whom they shared the stage. It’s a very competitive world and, despite having a strong track record, it’s not easy to take home a Rolex when you look at the other stellar performances coming from sailors across the country.  Martin knows this all too well after his prior six nominations. They gave credit to the support from St. Francis Yacht Club, and to their Bay Area and California competitors who have kept them challenged and at the top of their game.

In January, US Sailing shortlisted the top performing American sailors of the year. Panels of past award winners and sailing media journalists voted for the winners from the list of panelists. In a perhaps controversial twist to the process this time, fans got to vote online for the 2019 winners. Votes from the three groups counted equally in determining the winners.

The presentation was part of US Sailing’s Leadership Forum, wrapping up tomorrow in San Diego. More on that next week in ‘Lectronic Latitude.

The Clipper Race around the world is currently sailing from Australia to Asia in Leg 5. As such, organizers are closely monitoring the coronavirus situation in China.

Here’s the latest from the event’s news feed, updated on Wednesday:

“In view of the coronavirus outbreak, the Clipper Race, in consultation with the organising committees in both Sanya and Zhuhai, has amended its race schedule and delayed its arrival into China. The fleet, currently racing from Australia, will now head to Subic Bay, Philippines, which was previously planned as the second of three ports in Leg 5. The estimated arrival window into Subic Bay is 13-16 February. There will now be an extended stopover in this port of a minimum of nine days.

“The Clipper Race team has been working on contingency plans should the fleet not be able to stop in China due to the coronavirus outbreak. The Crew Changeover date for Leg 6 joiners will now be March 6.” Leg 6, the ‘Mighty Pacific Challenge’, takes the fleet from China to Seattle.

“The changeover will take place in either Zhuhai as planned or a port outside of China, should the need arise. This alternative location will be confirmed in due course.

“The arrival window into Seattle remains the same as the original schedule. Leg 7 and Leg 8 timings remain unaffected.” Leg 7 goes from Seattle to the Panama Canal, Leg 8 through the Canal to New York City.

Three ports in China — Sanya, Zhuhai and Qingdao — were (and are still) listed as intended stopover ports, but we understand that Sanya is now out.

Ha Long Bay Viet Nam is currently leading the 11-boat fleet of 70-ft one-design monohulls. Qindao leads overall in the standings. The boats are named for sponsors, many of them for sponsoring ports, including Seattle. 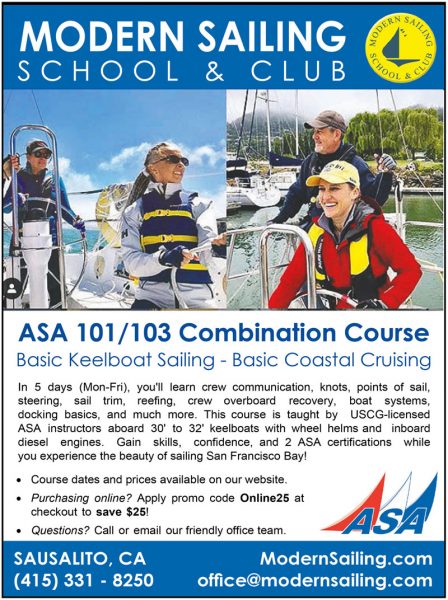 In one of the weirder kinda-sailing-related news items we’ve seen in a while, a group of Greek boaters were arrested for smuggling immigrants into Italy — apparently using sailboats they’d bought via internet ads.

The most recent interdiction reportedly occurred last Saturday off the Greek port of Hydra, when the Greek Coast Guard boarded a smallish center-cockpit boat (we don’t recognize the design) that was motoring at night, sails stowed but running lights on. Aboard were “two skippers, members of the organization and 19 immigrants . . . including four minors,” according to one online article. (Another online article said the ring had been “about to smuggle 119 people on the yacht.” Yet another claimed that 140 immigrants had been smuggled into Italy since November 2018. So your guess is as good as ours as to what’s correct.)

None of the online news items we found indicated why the smugglers seemed to prefer sailboats to other larger, faster, higher-capacity craft.

While we’re on the subject of sailboats doing illegal stuff, a bit of Bay Area trivia for you . . .

Many of you will recall the Ocean 71 Second Life, which years ago used to charter out of Sausalito. “But wait!” you might be blurting right now — “Isn’t it illegal for ‘foreign hulls’ to charter in the United States?” (The Ocean 71s were built in Britain.) Yes, it is. You blurters win a cookie. All vessels that charter here must have been built here.

Turns out there is a provision in maritime law that goes back to the days of fighting sail: If you seize a foreign-hulled ship engaged in illegal activity (such as shooting cannons at you), that ship automatically becomes an ‘American’ hull.

Second Life had a storied career, which included participating in the first Whitbread Round the World Race in 1973 under Roderick “Roddy” Ainslie (Ben’s dad). But it was being busted by the Coast Guard for smuggling — in this case, drugs — that set the boat up for a whole new chapter. Under that age-old provision, the boat “became” an American hull, and was thus legal to charter in American waters.

Sadly, that storied career came to an end after the boat left the Bay. Second Life sank in the Caribbean.

SailGP has entered a cycle of frequent press releases in the lead-up to the first regatta of Season 2 in Sydney, Australia, on February 28-29. Yesterday’s email announced that global entertainment, sports and content company Endeavor has purchased a minority stake. Endeavor’s investment position values SailGP at US$200 million, following the success of its first season.

SailGP CEO Sir Russell Coutts said: “Endeavor’s partnership represents a pivotal moment in our young and developing history. It strengthens our position going into our second season and signals the projected long-term value of SailGP.” Maybe now they can get their website to actually work.

Located in San Diego, California, USA, Dauntless has been featured on covers and in issues of Sailing Magazine, Wooden Boat and Nautical Quarterly. Dauntless has a competitive record including races from San Diego to Hawaii, biannual Master Mariners regattas, winner of the 2018 Schooner Cup, and numerous races and cruises along the West Coast and Mexico.  END_OF_DOCUMENT_TOKEN_TO_BE_REPLACED

SHARE ON Tweet Share Email
Receive emails when 'Lectronic Latitude is updated. SUBSCRIBE
'Lectronic Latitude: Wednesday, Feb 5
A Word on Provisioning
What’s the Buzz Around the Pacific Puddle Jump?
Chatting on a hot New Zealand summer day this week, my new friend and fellow Pacific Puddle Jump 2019 alumna Elizabeth Stacey laughingly said to me, “We have a lot of canned tuna!” I can totally relate.
Calling on Latitude nation
Share Your Youth-Sailing Memories with Us
We can remember our junior sailing days as if they were yesterday. It was summer, a hallowed time for kids. No school, no shoes, no worries, just sailing, and long, lazy days beaching your boat and swimming and jumping off docks.
Sponsored Post
Westwind Boat Detailing
Washing, waxing, varnishing. Serving the entire Bay Area for more than 25 years. “Boat looks great. Please pass my thanks to those who did the work."
Season 2 Expanded
Copenhagen Will Host SailGP in September
SailGP has added another event to their 2020 season. The ROCKWOOL Copenhagen SailGP will take place in the Danish capital on Sept. 11-12, serving as the fifth event in the second season.
Latitude 38’s Classy Classifieds
Shopping for a Boat? Selling a Boat? See Our Classy Classifieds
Latitude 38's Classy Classifieds are the place to shop for sailboats — as well as marine gear, trailers, liferafts, boat partnerships, trades and more.
More 'Lectronics »