Chatting on a hot New Zealand summer day this week, my new friend and fellow Pacific Puddle Jump 2019 alumna Elizabeth Stacey laughingly said to me, “We have a lot of canned tuna!” I can totally relate; I have way too many tins of sardines, but you’re bound to make mistakes when you provision for a 3,000nm journey across the Pacific into remote island archipelagos. This year’s Puddle Jumpers are preparing now for their departures from the west coast of the Americas. Eavesdropping on the digital PPJ forums has me reflecting on what my fellow jumpers and I learned in 2019, and what we wish we’d known before we departed for the remote islands of the South Pacific.

The latest buzz online has been about long-stay visas, a topic I know many in the 2019 fleet fretted about. Kathy and David Bennett sailed their Valiant 40 Pacific Destiny from Alameda to French Polynesia and back again during last year’s season, partly due to the 90-day limit for US citizens arriving by yacht without a visa. I opted to get a long-stay visa before departing from San Francisco, but spent nearly two months waiting, so I didn’t have time to visit Mexico before taking off for the South Pacific. Every cruiser I met who didn’t have a long-stay visa regretted it. Not having the visa also meant that some had to depart French Polynesia in less-than-ideal weather conditions.

Thankfully, dedicated cruisers and 2015 PPJ vets Chuck Houlihan and Linda Edeiken of the Allied 39 Jacaranda have published updated documents in the past few weeks with the details needed to navigate the visa application process in Panama, Mexico or the USA. Bruce Balan and Alene Rice of Migration (a Cross 46 trimaran from Long Beach, CA) recently started the process in Mexico City for the second year in a row, and have also provided a thorough guide. (Balan has also supplied free South Pacific charts for OpenCPN, useful for anyone planning to make the jump.)

Bringing items for trade has been a much-discussed (though controversial) topic lately, with some cruisers suggesting items that are, errrr… less than legal. I can’t get behind that, but there have been other useful suggestions I wish I’d been aware of before my departure last year. Jean Baillargeon of Vancouver, BC, suggests bringing reading glasses. “You can get them free from the Lions Club’s recycling program. We distributed over 1000 pairs throughout the South Pacific. It makes a huge difference in people’s lives, especially older women who need good eyesight to make crafts they sell for additional family revenue.”

The kids appreciate candy but, just as in the US, childhood obesity is a growing problem in Polynesia. I liked the suggestion of Bryon MacDonald of the Pacific Seacraft 40 Bella Sirena (Alameda, CA), and 2017 PPJ alumnus: “Soccer balls from Walmart! Deflated, they take up no room. Bring plenty; every time a winner give-away for the younger set!”

French Polynesia has changed over the years, and another experienced cruiser, Ed Harms, says, “Most Marquesans preferred US dollars over baubles and toys. There is nothing that they can’t already easily obtain.” I found this to be true, making trading difficult for those of us on small budgets.

Batteries, good line, and mooring gear were popular with rural locals, though I wished for more meaningful ways to contribute. The Palmerston atoll principal, Sherrin Hibbard, informed me that they already have lots of crayons and art supplies. What schools really need now is modern technological contributions, like USB sticks, tablets, relatable children’s ebooks, used computers, and digital cameras.

Visas and trading supplies are just the latest topics creating buzz between this year’s PPJ fleet and veteran jumpers. The Pacific Puddle Jump forum on Yahoo Groups recently moved to a new location on groups.io, but it’s still quite active. Thanks to a major data migration at the end of 2019 by Rob Macfarlane of the N/M 45 Tiger Beetle, you can find years of archived documentation and discussion on the new platform.

Meanwhile, those of us who made the jump last year are still thinking about all the little details we learned. Before discussing our over-provisioning of canned fish, Elizabeth Stacey mentioned that she wished she hadn’t worried so much about having good quality American propane tanks before departing. “Buying a local French tank made it easy to swap for full tanks throughout French Polynesia.”

I don’t have a propane stove, but I can relate to the sentiment: You don’t know what you don’t know until you go. Chatting with other Puddle Jump alumni in New Zealand has prompted me to reflect on the trends I observed last year in breakages and provisioning fails, and the myths that turned out to be false. For example, just how many liters of rum *are* you permitted to have when you arrive in French Polynesia? A thorough lesson from recent veterans could have helped me bridge the knowledge gap last year . . . and kept me from running out of rum.

To learn just how many bottles of rum you can provision when cruising to French Polynesia, stay tuned for an upcoming two-part series of lessons learned by Elana Connor and 2019’s other first-time jumpers.

Connor is also currently featured on the Out The Gate Sailing podcast, in part 1 of a two-part series. Connor also has an article about her Soft Landing in New Zealand in the February issue of Latitude 38.

We can remember our junior sailing days as if they were yesterday.

It was summer, a hallowed time for kids. No school, no shoes, no worries, just sailing, and long, lazy days beaching your boat and swimming and jumping off docks. We remember those days with the smell of sun-baked wood and BBQs and sunscreen.

We can remember our first instructor job as if it were yesterday.

It was pure excitement and sheer terror, the thought of being in charge of a group of kids. You quickly learned that they could smell the fear on you; they would eat you alive at the first sign of weakness. But as you did the job more, you learned how to manage the madness, how to herd cats and keep your kids engaged.

Even though it was a job, being a sailing instructor was the natural evolution of sailing as a kid. For some of us, it was quite frankly the coolest job imaginable. You had responsibility. You had the keys to your own boat to zoom around in. You were grown up. You might have even been someone’s mentor.

We can also remember the first day we dropped off our kids for sailing camp — also as if it were yesterday. It is no small leap of faith to leave your children in the care of a complete stranger. There is no small amount of joy in seeing your kids learn and eventually love sailing, and as they get older, being able to share the sport and lifestyle with them.

We Want to Hear from You

We are putting together a feature about the generations of youth sailing. If you have a story, pictures, anecdotes, memories or words of wisdom  you’d like to share with the Latitude Nation, please let us know. While we’re excited to hear any and all of your junior sailing stories, we are especially curious about multi-generation junior sailors. 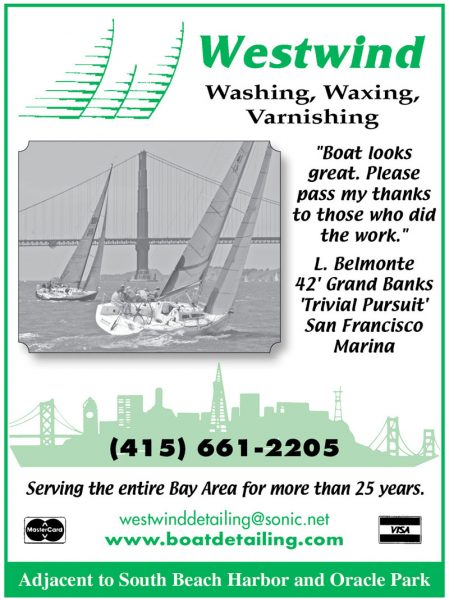 SailGP has added another event to their 2020 season. The ROCKWOOL Copenhagen SailGP will take place in the Danish capital on September 11-12, serving as the fifth event in the global championship’s second season. Seven national teams will compete in the 50-ft foiling trimarans in Scandinavia for the first time. The home crowd will get to cheer on Nicolai Sehested’s Denmark SailGP Team. Tickets will go on sale in April.

Season 2 will kick off on February 28 in Sydney. Events in San Francisco (May 2-3), New York, Cowes, UK, and now Copenhagen will follow. The Danish team will host defending champion Australia and challengers from France, Great Britain, Japan, the USA and fellow new entry Spain. They’ll all be vying for sailing’s largest monetary prize of US$1 million.

Danish helmsman Sehested said: “The upcoming season is shaping up to be historic for our team and Danish sailing. Our crew could not be more excited to race in front of a home crowd this September. We’ll have several races on the F50 catamaran under our belts by then, and look forward to making our friends, family and fellow Danes proud.”

Lonely Planet named Copenhagen the world’s top city for 2019. The Danish capital has set a goal to reduce CO2 emissions by 70% by the year 2030.

The event will offer a ticketed and free spectator areas at the cruise terminal at Oceankaj adjacent to Nordhavn, with an on-water option. The racing will take place on the water’s edge, with fans just yards away from the high-flying action.

SailGP CEO Sir Russell Coutts said: “Denmark has an incredible record of success in sailing on the international stage. We’re thrilled to bring our exciting, action-packed racing to Copenhagen. As we continue to evolve our championship, we’re being approached by new locations that not only have an appetite to host the world’s fastest sail racing, but also see SailGP’s potential to help create a positive and lasting legacy for the host city.”

Season 2 of the global championship begins later this month, with tickets available at SailGP.com/Sydney. Organizers may add a sixth event to the schedule later.

In Friday’s ‘Lectronic Latitude, we’ll check in on the American SailGP team and meet their sailing crew for 2020.

Latitude 38’s Classy Classifieds are the place to shop for sailboats — as well as marine gear, trailers, liferafts, boat partnerships, trades and more.

You can also list your sailboat for sale or sell a slip or a home near the water. There are even crew ads, personal ads, Mexico ads, nonprofit organizations’ events and a miscellaneous category.

The deadline for paid classy ads in the March issue of Latitude 38 is Saturday, February 15, at 5 p.m. Pacific Time. Ads go online within three business days. 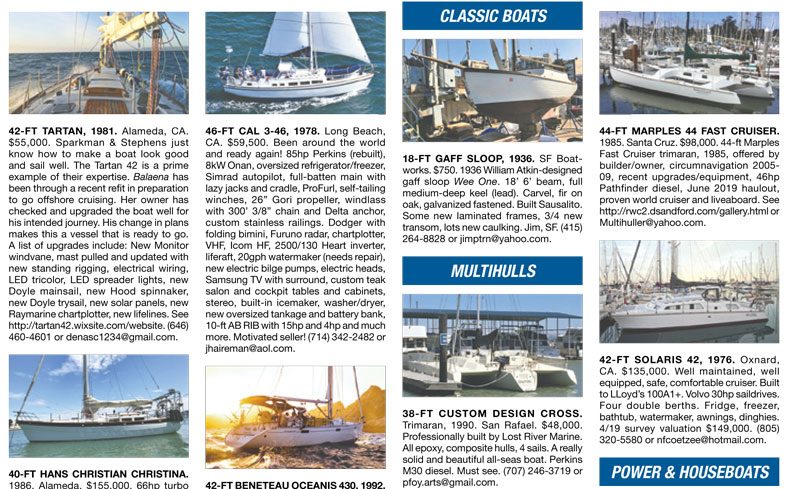 Free Classy ads for boats and items for sale under $1,000

Ads for boats or other items for sale for under $1,000 are free and will appear online only for 30 days. One free ad per person, per category, per 30 days. Up to 40 words of text. No brokers, no businesses, no photos in free ads — no deadline either!

For any changes to a currently running classified ad, please call or email with the type of ad and contact info, and we will get back to you to confirm and then make the changes for you.

SHARE ON Tweet Share Email
Leave a comment
Receive emails when 'Lectronic Latitude is updated. SUBSCRIBE
'Lectronic Latitude: Monday, Feb 3
The Weekend Report
Lookin’ Good, Latitude Nation
With no small amount of inspiration from local legend Randall Reeves — we completed the first-ever figure 8 in the Bay Area, sailing around Angel Island, then sailing around Red Rock.
Get Ready to Mingle
Catch a Ride on ‘Esprit’ for the Spring Crew Party
Friends of Latitude Mitchell Andrus and Quincey Cummings will be sailing their Kelly Peterson 46 Esprit to the shindig. Crew Party attendees will be able to tour the boat…
Sponsored Post
Rubicon Yachts: Featured Catamaran Listing
The Leopard 3900 earned "Boat of the Year" from Cruising World and SAIL Magazine for its speed on the water and ease of handling features.
Seasmanship Skills and More
February Is Seminar Season
As chilly weather continues on the West Coast, many sailing events step indoors for the purpose of preparing for the summer season. Each year at this time, we find our Calendar packed with educational opportunities.
Job Opportunity
Join the Crew as a Sales, Marketing and Communications Assistant
Latitude 38 is currently looking for an enthusiastic sailor to work with us full-time in our Mill Valley office as an assistant in marketing, communications and events.
More 'Lectronics »