Here’s your January Caption Contest(!). As you may or may not know, the winner — and top 10 entries — will be posted in the February issue’s Loose Lips.

When we left them on Monday, Jessica and Jim Lockfeld, who were transiting between La Paz and Mazatlan around the New Year, had just managed to get the crew of the floundering Green Dragon 2, Gary and Rosalie Green, onboard during a rescue on the proverbial dark and stormy night. The Greens were “two dripping castaways on our deck,” Jessica wrote. But the Lockfelds’ Tartan 38’s engine had overheated during the rescue, and they were temporarily adrift.

We nattered about the engine. The wind was pushing us, with bare poles, where we wanted to go. We were making three knots . . . so we weren’t overly stressed. The  engine has been overheating this season — this was the third time — but it was always when we’d been running at low rpms. We decided that we could try starting it up again. Running at normal revs, we were moving enough water through the system that everything stayed in normal range. We headed for Mazatlan.

Meanwhile, there were communications. The Coast Guard said that they had been informed that the Mexican Navy was already on site. We told them, and it would have been tartly, if we could have mustered it through the InReach, that they were nowhere to be found.

We got our guests below, into dry clothes, and tucked into our bunk. We don’t often sleep there during passages, preferring the quarter berth. I took the helm, Jim took the InReach for communications, which were mostly “We have them, the boat is abandoned, headed for Mazatlan,” which was enough to make him want to hug the lee rail for a bit. Small screen, frustrating letter-by-letter hunt and peck, while the boat is doing her downwind wallow with a twist in the tail. Still, it was an easier ride running with the wind than it had been coming up. I stopped puking, but then the adrenaline crash made me shake and shiver like I was going into shock. I found some Dramamine left over from our guests last summer, gave Jim one, took half myself, then went below and honestly slept for an hour and a half. I don’t think I’d actually done that since we left La Paz. I woke up and came up and let Jim come down for the same.

There was another lightning storm between us and Mazatlan, an evil thunderhead blocking the stars. I, alone on deck, eyed it grimly and told myself that we hadn’t been hit yet, and if it was going to hit us there was nothing I could do about it. Carry on, sailor. And yet, yes, the wind was moderating, and the seas were starting to lie down a bit, and just maybe we could carry a jib and get home a little sooner.

The sun came up. Coffee happened. The storm dissipated. Our guests woke and were fed a real breakfast, at least, all the eggs that hadn’t smashed on the deck during our run north to save them. The skies cleared and a pod of dolphins played around us. Jim saw a whale in the distance. The sea started to boil with fish feeding, birds wheeling overhead, all the celebration of life that is the heart of Mazatlan.

We made it into port at 1630, welcomed by the marina office, who graciously agreed, to my exhausted pleas, to explain to the port captain, who had been looking for us, that we would be happy to talk to him tomorrow.

Jim’s expert pilotage in heavy seas deserves high praise. His unhesitating willingness to change course in spite of personal desire was admirable. His patience in assessing the scene and having ready lines to throw was important in this rescue. Having me as an able deck hand was also critical. Being a judo practitioner and knowing that bodies move when hauled upon was important; having that visceral knowledge that I can hold and move a person, that was important. Knowing what to grab and haul without thinking about it . . . all of this contributed to the relative smoothness of this event.

We did take some damage: The second anchor roller, which we never use, is bent straight up at a ludicrous angle. The lower pulpit rail got bent up as well. The shaking and beating we took on the run north appears to have worked loose a chainplate seal, causing water to come in and drown Jim’s computer, and dampen some cushions and books. All of this is cheap at the price of two lives.

This is tomorrow. Our guests are bound back for the US, and the port captain, who sent a pair of men to take their data and ours, is happy with us. The communication glitches with the Coast Guard were that the Mexican Navy was attending to a different boat in distress. Then they couldn’t get out to our station because of adverse weather conditions. I find no fault with that assessment.

And now the sun is out in Mazatlan and the world is holding still, and if we can do this for a couple more days I may be willing to go to sea again.

In fair weather. At least, until it turns foul. 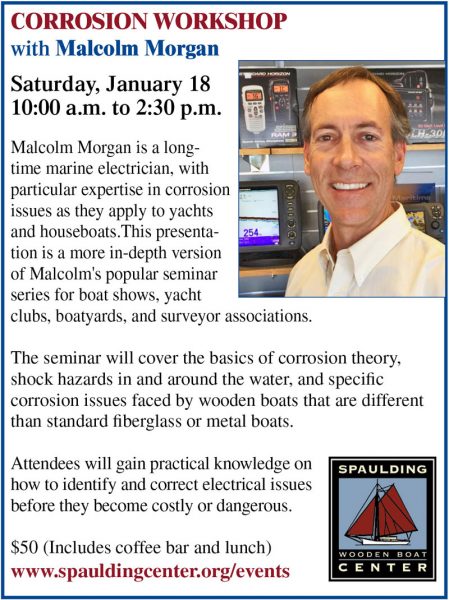 The Sailing Convention for Women is celebrating its 30th year. Presented by Gail Hine, it will be held on Saturday, February 1, at the Bahia Corinthian Yacht Club in Corona del Mar (that’s in Newport Beach). The event is sponsored by BoatUS and marine-related companies. The daylong, ladies-only series of shore- and boat-based workshops offers beginners to experts a welcoming environment to learn more about all topics sailing.

“The Convention gives women an opportunity to meet other women sailors, discuss options for more cruising and daysailing, and find out about women’s sailing organizations and instructional programs available,” said Hine, the Convention’s creator/director. “We have something meaningful for everyone. One attendant said, ‘It was the best day of my life!’”

Attendees select a combination of workshops in areas that best fit their interest and ability. Top women sailors from all over Southern California and outside California serve as instructors. Many hold USCG Captain’s Licenses.

Haley Lhamon, a member of the 2018 eight-woman team who won the fourth Race to Alaska, will speak at dinner. In the R2AK, the boats are not allowed to use motors and can get no support along the way. It’s an adventure that’s 750 wild and treacherous cold-water miles long. From Port Townsend, WA, to Ketchikan, AK, Team First Federal Sail Like a Girl planned well, practiced, and had pre-race support from families and friends to win with the first all-women team. It was also the first time a monohull had won (a Melges 32). Haley grew up in a big family in Texas. She learned to sail early; became a winning competitive youth sailor; has sailed in many exotic lands, such as Europe, South America and New Zealand; attended Stanford University, where she met her husband; and settled in Washington state, where she has promoted youth sailing.

SHARE ON Tweet Share Email
Leave a comment
Receive emails when 'Lectronic Latitude is updated. SUBSCRIBE
'Lectronic Latitude: Monday, Jan 13
Sorry No Rolex
Hobart to Sydney Deliveries and Carnage
A few days after the 75th edition of the race concluded and the bulk of the fleet began making their way back to Sydney, a large low-pressure system swept over Tasmania and South Australia, creating nuclear wind conditions in the region.
Because Ignorance Is not Bliss
Newport to Ensenada Race Seminars
The series will kick off this week exactly 100 days before the start of the N2E with a special presentation by noted offshore yachtsman and America's Cup veteran John Sangmeister.
Call Now for 10% Off
Discount on Side-Power Thrusters at KKMI
Whether you need a new thruster or it's time to update your old one, now's a great time to take advantage of this discount on the product that can help you take the fear out of any fairway.
See you there
Reminder About Tomorrow’s Sausalito City Council Meeting
Latitude Nation — Just a reminder that  tomorrow night at 6 p.m., Sausalito’s City Council and Planning Commission will hold a special joint meeting to discuss land use and growth management, community design and cultural preservation.
Responding to a mayday
The Rescue of ‘Green Dragon’ off Mexico, Part 2
Readers — On Friday, Jessica Lockfeld began recounting the rescue of the crew of Green Dragon 2.
Keeping Their Priorities Straight
Sequoia Yacht Club Tackles Latitude 38 on Game Day
Members of the Sequoia Yacht Club tackle Latitude 38 on game day.
More 'Lectronics »