To be fair, first-evers are relative. What’s a sailing first-ever to me has probably been done a gazillion times.

But it’s no less significant. On Saturday, as the rain clouds finally parted in Northern California and the breeze filled in, we decided to make our first-ever circumnavigation of Red Rock, a rust-colored lump of island plopped down to the immediate south of the Richmond Bridge.

Before we go too far with our tale of unspectacular achievement, we should say that we saw lots of sailboats on the Bay Saturday, and a few on Sunday (though the wind was much lighter). There was a palpable feeling of relief, as the weekend was one of the first sunny, sailable days in recent memory (a reminder here that Californians are terribly spoiled over the weather). If you were one of the many boats on the Bay, if you happened to see us, if you enjoyed the reprieve from the rain on the rail of a boat, then you should, by all means, tell us about it.

And, even better: If you have a tale about rounding Red Rock, or one of your first-ever sailing feats, please, please use the link above, and bend our ear.

This was our Saturday. First, are they dredging San Rafael Canal? Or parts of it? On the way out the channel, there was a tug, a barge and a serious piece of scooping machinery digging deep into the water. It was our day off, so we have no journalism to offer at this time, other than a, “Hey, somebody’s digging something in the Canal,” likely a private residence.

As regular readers may well know, the name of our game is to go with the flow. We truly go where the wind blows (and how the current flows), and on Saturday, conditions were perfect for a jaunt east, under the Richmond Bridge.

There are simply no words to describe how it feels to raise sail, kill the motor and bury the rail. It’s more than that it never gets old; it never fails to elicit a beaming smile and an affirmation of every second spent sailing, and of every penny spent on the boat. Surely — and without exaggeration — there are few things in the human experience greater than this.

The circumnavigation of Red Rock was not planned with the monomaniacal focus with which great sailors have accomplished their historic, first-ever feats. “Hey, where should we go,” we asked each other. “I dunno, you wanna go around Red Rock?”

Red Rock Island marks the corner and convergence of San Francisco, Marin and Contra Costa counties. It is approximately 500 ft wide by 750 ft long and 150 ft tall. A search on our chart app told us there was plenty of water all around it.

It was surprisingly exciting to make a slow, downwind approach and slide into the lee of the island. There is certainly something very Huckleberry Finn about the big lump.

Here’s a bit of copy-and-paste, Wikipedia journalism for you: “[Red Rock] Island was privately purchased in the 1920s. After a series of owners, David Glickman purchased the island in 1964 for $49,500. In the 1980s, a plan was proposed (but never implemented) to remove the top half of the island (which would be sold for highway roadbed construction). The island would then be developed with a 10-story hotel and casino, and a yacht harbor on the lee (north) side. Water and power would be provided from lines connected to the San Rafael Bridge.”

“In June 2007, Glickman announced that Red Rock Island was for sale for $10 million. In early 2012, the island was listed with a realtor at a price of $5 million. As of December 2018, the island was owned by Brock Durning, who refused to say whether it was for sale. The island is mentioned and described as ‘Blue Island’ in the novel The Circle by Dave Eggers.”

We’re not sure at what point we closed the loop on Red Rock. Distracted by the amazingness of the day, we forgot to make note, and ended up doing more of a long cigar shape around the island. But nonetheless, a Bay Area first-ever was on the books. 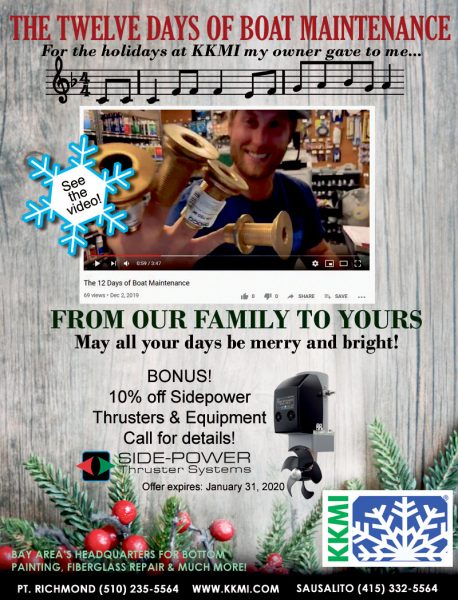 Elana Connor sailed out the Golden Gate in 2017, bound for Hawaii. Captain Conner’s only crew was Jadzia Dax, her dog.

Yesterday, Connor posted on her Instagram that she’d just arrived in New Zealand — it was a long and critical leg along her current west-to-east circumnavigation.

“I’m endlessly grateful for all the help and support many of you have given us so that we might arrive safely, especially after we lost our weather and email satellite capabilities shortly into the passage,” Connor wrote on her Instagram. “Not to mention being becalmed for days, the engine breaking, the stove literally wearing through its gimbals and falling down; losing our boathook, canvas bucket, a dorade vent cover, and the only fish we caught.

“Windfola [Connor’s Sabre 34] sprung new leaks, including from our freshwater tanks, and we had to heave-to to survive a nasty passing weather trough, but after all of that, on our 18th day, we arrived under sail in the moonlight to the peace and safety of the Bay of Islands. We’ve finally cleared in, and though I’m missing Zia (who has to remain in a far away quarantine facility for some time still), it’s been amazing to reunite with old boat friends and never-yet-met-but-long-heard-of new boat friends. I’m looking forward to lots of quality time with our fellow bluewater sailors, fresh fruits & veggies, catching up with our loving supporters, and fixing all the broken things on board, but most of all, sweet sweet sleep.”

We will have more on Elana Connor in February’s Changes — specifically Cruise Notes. Stay tuned!

Perhaps taking its cue from the Olympics, the next Youth America’s Cup will require mixed crews of two female and two male sailors on each boat. The two previous editions were almost exclusively male.

YDL’s owner Ian Cook just happens to be the commodore of America’s Cup Defender Royal New Zealand Yacht Squadron. “We are incredibly happy with the design of the AC9F,” says Cook. “We believe they will generate great competition and an even playing field for all the teams involved, whilst also leading from the front in terms of modern yacht design, and creating a great product for fans around the world to observe.”

China will host a fleet-racing seeding event in November 2020. A match-racing event in Auckland on February 18-23, 2021, will follow. The finals will take place on March 8-12, 2021, outside the RNZYS clubhouse in the shadow of Auckland’s Harbour Bridge.

In keeping with the original America’s Cup Deed of Gift, the Youth America’s Cup is designed to be a “friendly competition between yacht clubs of all nations.” Multiple entries from various countries will be allowed. Crews must be 18-24 years of age, with a maximum crew weight of 311 kilograms (that’s ever-so-slightly less than 730 pounds, an average of 182.5 lbs per person).

“The Youth America’s Cup is something we have been eager to see established since we won the America’s Cup and also introduced foiling monohulls to the America’s Cup with the AC75. The Squadron has presented a concept that we believe will add something special to the 36th America’s Cup,” said Emirates Team New Zealand CEO Grant Dalton. “Probably the most important aspect of this is that through the establishment of the Youth America’s Cup event, in conjunction with the exciting AC9F boat, a pathway or vital stepping stone for the best young guys and girls from around the world has been created to progress one step closer to sailing on an AC75 in the future. It is hard to go past the evidence of our current team that is now made up of a number of crew members from the winning 2013 Youth AC team.”

Sailing in the shadow of the Golden Gate Bridge in 2013, the Kiwi team won the inaugural edition of the Youth America’s Cup in AC45 catamarans. The British team won the second edition in Bermuda in 2017.

The initial entry period for yacht clubs and youth crews is no open through February 29, 2020. The entry protocol is intentionally very similar to that of the America’s Cup Challenger series and match.

We’re looking forward to seeing who signs up. Send expressions of interest to [email protected] Find more Youth America’s Cup info at www.youthamericascup.com. But don’t look for it on the main America’s Cup site, because you won’t find it there. They haven’t updated that since November. 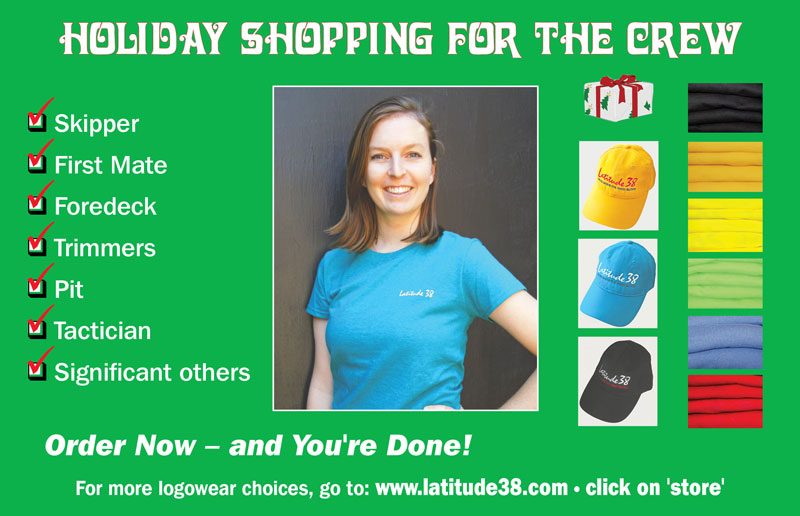 SHARE ON Tweet Share Email Linkedln
Leave a comment
Receive emails when 'Lectronic Latitude is updated. SUBSCRIBE
'Lectronic Latitude: Friday, Dec 13
The Tall-Ship Circuit
A Different Kind of Cruising for a Californian
Krista Swedberg caught the sailing bug early. Starting out as a little girl aboard her parents’ Santa Cruz-based Islander 40, she remembers trips every summer south to Monterey and north into the Delta.
Sponsored Post
Workaholics Adrift by Judy McCandless
Workaholics Adrift: A gift to thrill any sailor or traveler. A life-changing sailing adventure.
The Call of the Sea
Latitude Sailor Southbound for Mexico
The annual West Coast Mexico migration covered in the pages and pixels of Latitude 38 has been on people’s sailing calendar for decades or even a lifetime.
One-Design Regatta in Miami
Eastward Migration for Winter Racing
Although the California climate offers plenty of opportunities for winter sailing, many West Coast cruisers flee south to the warmer environs of Mexico and beyond. Another option is to head east.
Last Call for Classy Ads
Classy Classified Deadline Sunday the 15th
To get your ad into the January issue, the deadline is SUNDAY, December 15, at 5:00 p.m. This is a hard deadline due to the holiday schedule.
More 'Lectronics »
Report Listing