Just in time for some exciting weekend racing, San Francisco’s ocean breeze air conditioning system turned on, complete with the return of Karl the Fog and wind gusts of up to 30 knots. On Saturday, the heavy weather precipitated a gravity storm for three unfortunate boats: the J/105s Godot and Russian Roulette and the J/88 Inconceivable.

Some faces in the crowd:

We’ll hear from the winners and have much more in the October issue of Latitude 38, coming out on October 1. Until then, check out www.rolexbigboatseries.com.

It could be you. We’re now up to entry 148, and with the addition of the Hunter Passage 42 Dakota, have two more boys, 11 and 7, in the fleet. For those of you headed south with kids this winter, that means we’re close to 20 kids slated to be in the fleet.

The latest entry deadline is September 20. But because we know how busy everybody is getting their boats ready, and because we love you, we’ll extend the deadline until October 1. Besides, the Grand Poobah and Assistant Poobah are busy doing the SoCal Ta-Ta.

If you haven’t signed up by October 1, you can always contact Patsy ‘La Reina del Mar’ Verhoeven, the Assistant Poobah. She has a lot of influence, loves red wine, and having lived in Mexico for years, can introduce you to the concept of mordida.

For details on the Baja Ha-Ha, visit www.baja-haha.com. 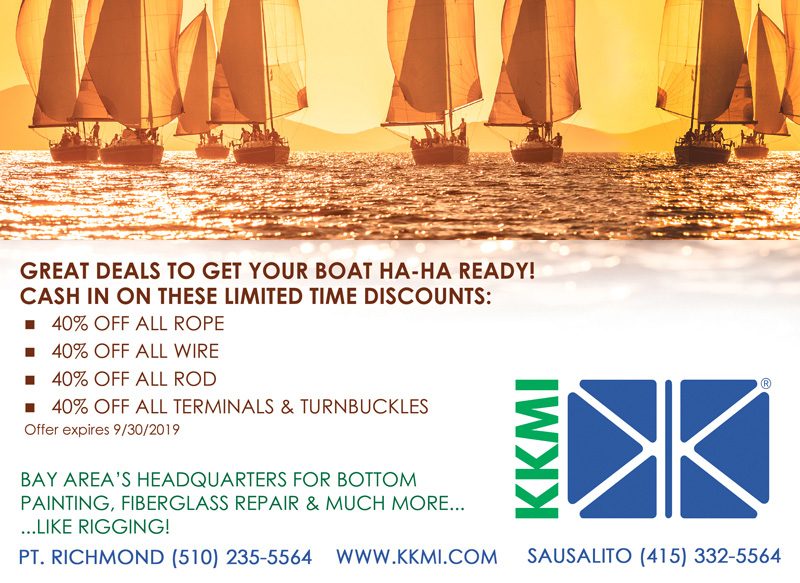 Here are a few happenings — ranging from the newsy to the slightly ancient — from around the Latitude Nation:

“We were out cruising on Labor Day, and encountered what we thought was a capsized boat,” Art Hartinger wrote us.

“However, it was moving, and we are now thinking it was some sort of submersible?”

Your guess is as good as ours, Art. If anyone has any idea what, exactly, this vessel might be, please comment below.

In the spring, US Sailing introduced a new community sailing concept that was made possible — to no small degree — by a donation from the Thomas and Stacey Siebel Foundation. “The purpose of this ground-breaking Siebel Sailors Program is to increase diversity and opportunity in the sport of sailing by providing resources and support to youth sailors at public access sailing centers across the country,” US Sailing said in a press release.

Three Siebel Centers have been selected, including Columbia Sailing School in Chicago, DC Sail in Washington, D.C., and the Treasure Island Sailing Center, or TISC, here in the Bay. “TISC has been working with underserved populations for over 20 years,” US Sailing said. “TISC includes one of the most diverse sailing communities in the country, [and] organizes over 2,500 youth sailing opportunities annually with an average of 85% participating at no charge. These youth programs feature the exploration of the sport and beginner sailing to racing skills and the application of STEM education sailing programs. All programs emphasize the soft skills in character building that sailing naturally teaches.”

TISC executive director Travis Lund told US Sailing, “We are hopeful that this program will fill in the necessary pieces affording us the resources and expertise to develop sailing as a lifelong hobby and passion to communities where sailing has historically been perceived as a leisurely activity of the wealthy. From all of us at TISC, we want to express how truly grateful we are to Mr. and Mrs. Siebel for their vision and generosity in leading our sport in this direction.”

We ran into Latitude loyalist Jim ‘Goose’ Gossman last week at the crew party, and realized that we’d completely neglected an email he sent us in early August upon his return from the Potter-Yachter’s 20th Cruiser Challenge in Monterey for trailerable sailboats.  “While our attendance has trended lower from 30-ish to 20-ish boats, we still seem to make a big splash on the local waters,” Gossman wrote us.

“Hardcore racing isn’t ‘potterly’, but some of us still enjoy a bit of competition,” Gossman continued. “Strangely, other than a few fishing boats and kayaks, we had Monterey Bay to ourselves. Even the launch ramp congestion and waterfront parade of tourists walking by was oddly sparse. We raced past  the futuristic 200-plus-ft expedition yacht Game Changer, though I expected their security forces to chase us away if we got too close.”

“I’m a motorsailor fanatic, in search of the ultimate compromise boat. While I was the event coordinator for several years, I’ve been part of a growing contingent who launch in Moss Landing and sail in. The abundant sea life in Monterey Bay lends some optimism amidst the ominous reports of the ocean’s declining health worldwide.”

“There were plenty of whales, seals, otters, and birds feeding all over the place. Last year, on our return trip to Moss Landing, a whale surfaced under PY’er commodore Eric Zilbert’s boat, damaging his centerboard trunk, and frying his nerves. I kept a firm hold on my helm just in case I got bumped.”

We had to share this photo from this year’s Jazz Cup from Benicia Yacht Club race chair captain Dan Carnahan.

Josh and Christina are OK!

Along with the usual conversations and questions at our Crew List Party on September 11 came an unusual one from a number of people: “How are Josh and Christina on Tish?”

The reference was to Josh Longbottom and Christina Jeschke. In September’s Changes In Latitudes, Josh had written about the young couple’s decision to wait out hurricane season aboard their Bayfield 25 in the Bahamas. “It’s the first of August and Christina and I are back on Tish again after a month in the US and a month in Europe,” Josh wrote in Changes. “The Bahamas are great, really great, but it’s hurricane season now, and — not as we planned — it’s too late to go anywhere.”

So they hunkered down in Green Turtle Cay and kept close tabs on the tropical depressions. One by one, they came, and either dissipated before arrival or turned to miss the islands. Then came Dorian.

We reached out to Josh the week after the storm. He was able to confirm in a quick email that he and Christina were OK. They were able to fly out of the Bahamas, but they had to leave Tish. He promised more information later. It arrived last night.

Here are a few excerpts of his report, which will appear in full in a future issue of Latitude.

“I thought I would wait it out in the Bahamas, getting all zen on the hurricane season, waiting productively, chilling out on awesome beaches instead of hiding in a marsh full of mosquitos somewhere. But that’s not how things turned out, not at all. And the thinking that led me to think like that will be suspect forever.

“When I arrived in the Abacos, in May, I fell in love with the place. The Sea of Abaco is between worlds; it is transcendent. When the sun hits, over soft waves, above sugar-white sand, you get that Bahamian blue on the surface of the water, one of a kind. Of course I wanted to stay, even if it meant braving storms.

“To tell you the truth, I thought I was safe, and was even super-excited to watch storms come marching [out] off Africa to my front-row seat. I was thinking, I’m going to get to watch storms that I would never have the guts to observe from the deck of a boat — from an island that’s not much bigger than a big boat. It sounded great to me.

“Christina and I developed a set of rules that would reassure family who would be watching TV and worrying about us, as well as to help us make decisions, if it came down to it: Cat I: stay on the boat. Cat II: get a hotel. Cat III: get out.”

At the end of August, with the heat oppressive, the restaurants and bars boarded up, and “feeling like a bowling pin just before the pros set up,” the novelty had worn off and Josh and Christina decided to make one more try to sail Tish to Florida. But with fickle headwinds, a strong Gulf Stream and the little boat’s one-cylinder Yanmar, it wasn’t happening. They ended up in the ‘ghost town’ of Old Bahama Marina, where they were the only boat among a hundred empty slips. The dockmaster said they couldn’t stay.

“As we updated on weather, the picture came together, and family was calling worried. Maybe a Cat III. Maybe a direct hit. We had left Green Turtle Cay, where we had a plan. And here, on an island that is always getting hit, lies so very low, and that we’ve never even been to before, we had to make a new plan, a plan that was not going to be nearly as good.

“I’ve heard sailing friends say before, “I can’t lose my boat.” I don’t feel the same. I can’t lose my life, that’s how I feel, and that is the only way to feel about. And now, it’s real.”

Josh and Christina were able to get Tish to Knowles Marina and Yacht Services in Freeport, where they unrigged the boat and caught one of the last flights out the next day. They watched the storm unfold from Austin, Texas.

Freeport was hit hard. “We watched Bahamian TV to try to get news. I think I might have seen the boatyard owner’s daughter on the news, telling the story of her mother and father, struggling through the night, climbing to higher ground, through flood waters, to find a shelter, with only standing room,” he writes. He found himself worrying more about them than the boat. He sent an email to them with a prayer for the family.

This story has a much happier ending than many coming out of the Bahamas in the aftermath of Dorian. All Josh and Christina’s friends are okay. Some lost boats, but some boats have been recovered. And a week after the storm, the boatyard owner emailed back one sentence:

‘Thank you, and your boat is safe.’ 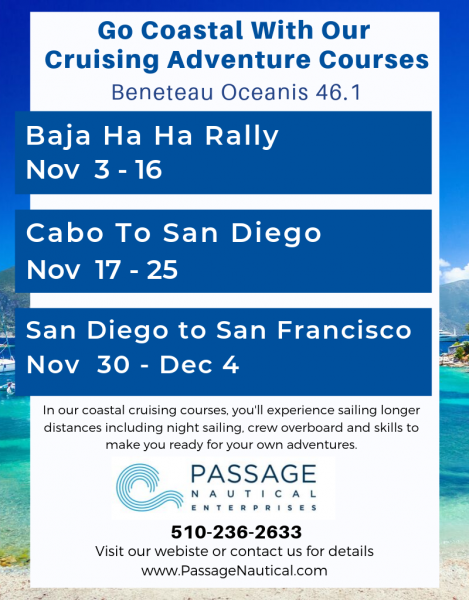 SHARE ON Tweet Share Email Linkedln
Leave a comment
Receive emails when 'Lectronic Latitude is updated. SUBSCRIBE
'Lectronic Latitude: Friday, Sep 13
San Francisco Bay Regatta
Rolex Big Boat Series Heats Up
A light morning breeze from the east presaged a postponement, but the race committee sent the boats out on time so that they would be ready as soon as a proper San Francisco summer westerly appeared.
The World Famous L38
Caption Contest(!)
Here’s your September Caption Contest(!). Please be sure to check the October issue’s Loose Lips for the winner.
Sponsored Post
Wayfarer Marina
Brand new docks in Marina del Rey at Wayfarer Marina.
Round the World Race
Clipper Race Catches Its Breath
The 70-ft monohulls handled conditions from a tough beat upwind to surfing downwind during an ocean-sprint thrill-ride on an exhilarating sea swell of over 13 feet.
The Name Game
The Reasons and Right Ways to De-Name Your Boat
People change boat names for all sorts of reasons. Which is all fine and good as long as you do it the right way.
Classy Classifieds
Classy Deadline Sunday!
The deadline for the October issue is this Sunday, September 15.
More 'Lectronics »
Report Listing