There is no denying that the seasons, they are a-changin’. The kids are back in school, there were Halloween costumes for sale at Costco, and Corinthian Yacht Club’s beer can series came to a conclusion under dramatic skies.

Not to worry, racers. There are still plenty of beer cans going throughout the Bay. And once those end, there will be a bajillion regattas throughout the fall, winter and spring to tied you over.

But with that said, we still got a little misty to see the Corinthian season go.

The 36th America’s Cup is less than 90 weeks, or, like, a year and a half away — though, in reality, the hype around the event is about to ramp up. We are starting to get our first headlines and occasional glimpses of the AC75, one of the most ambitious boats ever conceived in the nearly 170-year history of the Cup, and what we’re pretty sure will be the largest fully foiling monohull ever.

“Emirates Team New Zealand and the three heavyweight challengers — Luna Rossa, INEOS Team UK, and American Magic — are all finally set to splash their new AC75s in coming weeks, with the Kiwi boat due to be unveiled early next month,” reported stuff.co.nz yesterday. A few weeks before, American Magic released footage of their shrink-wrapped AC75 crossing a bridge over Narragansett Bay. “The concealed 23 meter [that’s 75.4593-ft] racing yacht was transported from the team’s construction facility in Bristol, Rhode Island, to its sailing operations base in Newport.”

And then, before we know it, there will be the Match itself. Will SailGP still be around in two years? Will another team wrestle the Auld Mug away from the Kiwis and conceive of an even more radical boat? These are all valid questions.

We are in no hurry for the answers. 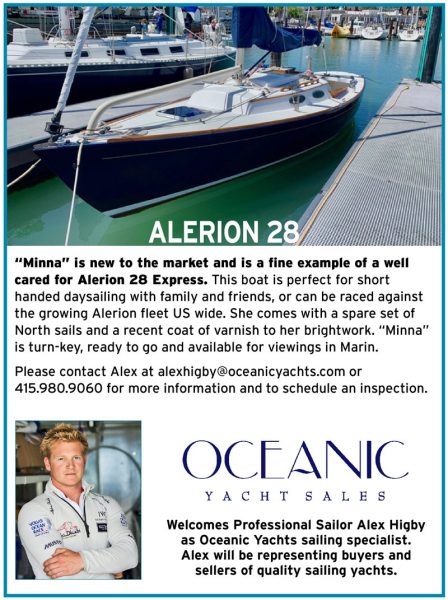 The San Francisco Sea Scouts invite all Bay Area 13- to 15-year-olds and their families to a day of sailing, rowing, free food and knot tying. They’re holding an open house on August 31. Stop by anytime between 11 a.m. and 3 p.m. this Saturday. No previous boating experience is required. Do dress warmly!

The Sea Scouts include teenage boys and girls. They meet year round. The cost is just $10 a month. They sail, row and compete against teenagers from all over California, go on overnight trips and cruises, and learn how to maintain wooden boats. The flagships of the San Francisco Sea Scouts are the open wooden sailing whaleboats Corsair and Viking.

Find their headquarters, and the open house, at 3500 Van Ness Ave. in Aquatic Park. RSVP for the event at www.seascout.family/openhouse.

Last May, Latitude 38’s Racing Editor Christine Weaver caught up for a chat with Sausalito sailing legend Mary Gidley and her son Memo aboard their Elliott 1050, Basic Instinct. Chris came away with so much interesting material that she ran a three-part story starting in the June edition of Latitude. But that was only the tip of the literary iceberg that documents the history and biography of one of the Bay Area’s most colorful sailing families.

You may recall that Mary Gidley took part in the oceangoing social experiment documented in the film The Raft. Anyone who has the courage and enthusiasm to be part of such an ‘out-there’ experience — even for the 60s — must have a lifetime’s worth of stories and anecdotes. Mary has just that and has taken the time to document her life in a recently released book, Point to Point: The meanderings and musings of my life.

We were given a sneak preview when Mary popped into the Latitude office last week to show us her book. Unfortunately it was Mary’s only copy so we can’t give you a review, but we can tell you that Point to Point is now available on Amazon.

Though after the short few minutes we had with Mary, we’re determined to get hold of a copy and learn more about this inspiring woman.

SHARE ON Tweet Share Email Linkedln
1 Comment
Receive emails when 'Lectronic Latitude is updated. SUBSCRIBE
'Lectronic Latitude: Friday, Aug 23
Pursuit Race up the Sacramento Ship Channel
Delta Dinghy Ditch Just Duckie
Way back in 2005 over a few craft beers too many, a fellow by the name of Ken Crawford announced to his Lake Washington Sailing Club cronies, “Why don’t we run a pursuit race all the way up that b*t%# of a ditch from Rio Vista to the club?"
West Coast Circumnavigators
Jeanne Socrates Zeroing in on West Coast
We are a little reluctant to say that any sailor  is in the homestretch — especially a circumnavigator who has been sailing around the world for going on a year now.
Sponsored Post
Alerion 28 at Oceanic Yacht Sales
Minna is new to the market and a fine example of a well-cared for Alerion Express 28.
A sail around the bay
Movie Star ‘Maiden’ Sails Under the Golden Gate: Part 2
After having met Maiden and her crew at their arrival in San Francisco on Monday, we were pretty excited to learn that we’d be joining them for a sail on Thursday.
Cast Your Votes
Sailor Nominated for Olympic Hall of Fame
Voting is open for the US Olympic & Paralympic Hall of Fame. Among sailors nominated is two-times Olympic Gold Medalist Mark Reynolds.
More 'Lectronics »
Report Listing